We've rounded up the best events in July and beyond! 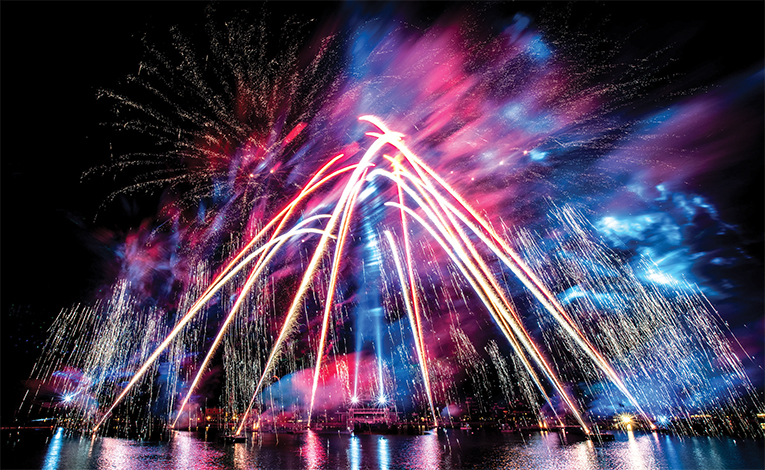 FOURTH OF JULY WEEKEND AT SEAWORLD ORLANDO
July 1-4: The night will light up as fireworks spectacular “Ignite 360” takes to the skies above Bayside Stadium, followed by a one-of-a-kind, patriotic finale to SeaWorld’s end-of-day sendoff. Included in park admission. 407-545-5550. seaworld.com

INDEPENDENCE DAY IN CELEBRATION
July 4: A whole day of celebration, beginning with the Independence Day Parade at 9 a.m., starting at the Town Center, followed by the Star Spangled Spectacular with DJs, live music, fun and food, including the Red, White, Blue & You BBQ at Lakeside Park from 5-8 p.m. Fireworks at 9 p.m. 407-566-1200. celebration.fl.us

FIREWORKS AT THE FOUNTAIN
July 4: With the skyline as a backdrop, Orlandoans and visitors are invited to gather around Lake Eola for family fun that includes live music, kids’ activities and food and beverage vendors from 5-10 p.m. Enjoy fireworks set to patriotic music from the Orlando Concert Band at 9:15 p.m. WKMG News 6 will broadcast and livestream the celebration, starting at 8 p.m. Lake Eola Park, 512 E. Washington St. orlando.gov

MELBOOM! 4TH OF JULY FIREWORKS IN MELBOURNE
July 4: This city east of Orlando hosts an Independence Day celebration at Front Street Park that can be viewed from the beach about two miles away and boats on the Indian River as well as from the riverfront park. 9 p.m. 2205 Front St., Melbourne. 321-608-7000. melbourneflorida.org

WINTER GARDEN PARTY IN THE PARK
July 4: The party returns this year with all the bells and whistles: fireworks, food and fun. The celebration begins at 6 p.m. and wraps with a spectacular pyrotechnic display over Lake Apopka beginning at 9:15 p.m. Newton Park, 29 W. Garden Ave. 407-656-4155. cwgdn.com

LEAF IT IN THE GARDENS!
Through July 31: Dress your kids in their favorite explorer costumes and set them loose for an unbe-leaf-ably good time on a scavenger hunt for 20 special leaves that tell all about these beautiful urban gardens. Free with admission. Harry P. Leu Gardens, 1920 N. Forest Ave., Orlando. 407-246-2620. leugardens.org

BUSCH GARDENS SUMMER NIGHTS
Through Aug. 7: Themed party zones with exclusive summer food and drink menus take the theme park experience to the next level. Join in the dance parties and cool off at the Turn It Up! Ice Show. Included with admission. Busch Gardens, 10165 N. McKinley Drive, Tampa. 813-884-4386. buschgardens.com

SEAWORLD ELECTRIC OCEAN
Through Sept. 5: When the sun goes down, the night lights up with electrifying dance music, colorful lights and a fireworks extravaganza. SeaWorld Orlando. seaworld.com

RUPAUL’S DRAG RACE: WERQ THE WORLD 2022
July 9: An experiment goes wrong and the audience is sent spiraling through time. Join Kameron Michaels, Rose, Vanessa Vanjie, Yvie Oddly and all the finalists from the upcoming 14th season as they work their way back to 2022. 8 p.m. Hard Rock Live, 6050 Universal Blvd., Orlando. 407-351-5483. hardrock.com

SQUAD HOUSE—THE ULTIMATE INFLUENCER TOUR
July 10: If being influenced by today’s most influential influencers is what you live for, this show should not be missed. Meet, interact with and learn from some of the most popular influencers and entertainers on TikTok in a family-friendly and fun environment. 7 p.m. House of Blues, Disney Springs West Side, 1490 E. Buena Vista Drive, Orlando. 407-934-2583. houseofblues.co