On Top of the World

How Scott Thompson, aka Carrot Top, went from oyster shucker to comedic headliner—and why he still calls Central Florida home.

Years before boy bands branded Orlando as a pop music factory, the city was more like an HBO comedy special. Taking the stage at small, smoky clubs were up-and-coming comedians like Darrell Hammond (Saturday Night Live) and Wayne Brady (Whose Line Is It Anyway?/Let’s Make a Deal) and Billy Gardell (Mike & Molly). For a few bucks, you could visit Orlando theme parks, comedy clubs, and improv theatres and watch Beth Armogida (The Tonight Show writer), Tom Rhodes (Comedy Central), Daniel Tosh (Tosh.0), Beth Littleford (The Daily Show), and up-and-coming comedian Dan Whitney, who billed himself as Larry the Cable Guy.

Then there was Scott Thompson. After a day at assorted odd jobs, in the evening the 23-year-old marketing major would find himself in the back of a comedy club, sitting patiently with a shopping bag at his feet. After a string of standup comics had delivered their punch lines, Thompson would take the stage and turn the evening upside-down. From his bag flew an endless assortment of comically engineered props that made the room look like an explosion at a novelty store. At each performance, audiences were dazzled by his high-octane imagination, a comic look accented by a thick shock of red hair, and visual inventions that were silly, stupid, and ingenious.

At every early performance he was the standup that stood out. Audiences could never forget Scott Thompson’s manic act or the stage name that fit him perfectly. 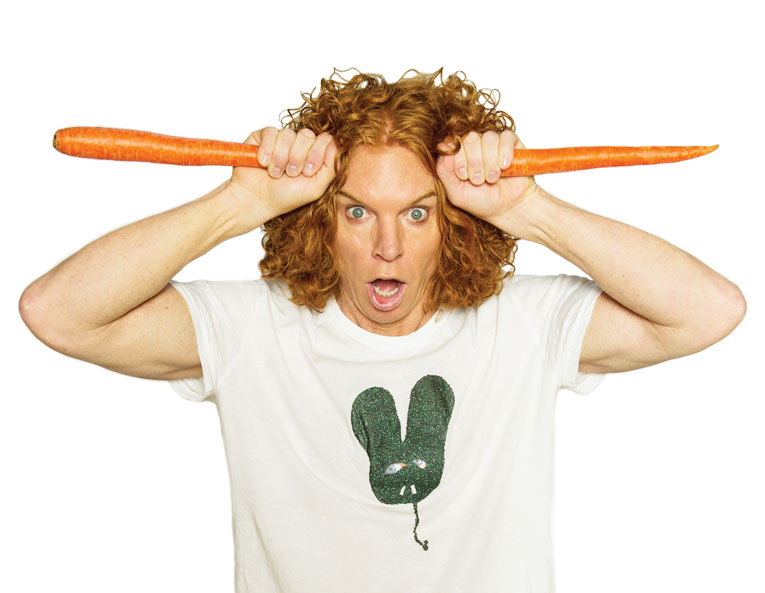 The King of Prop

Growing up in the Brevard County town of Rockledge, there were early indicators that he enjoyed attention. At St. Mary’s Catholic School, a nun entrusted the slight boy with a bell he’d ring to mark the end of recess. The privilege, Thompson says, revealed a desire to lead as well as a desire to be noticed. The quest for attention followed him to Cocoa High School where, at swim practice, he’d stand atop the starting blocks and fish for laughs by hoisting his bathing suit to his chest (“doing the grandpa sort of thing”) just to get a reaction from his teammates.

Although he categorized himself as a class clown, after entering Boca Raton’s Florida Atlantic University, Thompson considered himself a “lost soul.” Aside from choosing his major (marketing), he had no clear direction until his roommates gave him a roadmap. Showing Thompson an announcement for a campus talent show, they encouraged him to enter.

And do what? he asked.

Driven by curiosity and peer pressure, he called to ask how many comedians were competing. Learning there were none, he at least had the assurance of being the evening’s funniest comic. While putting his act together, he saw a sign. 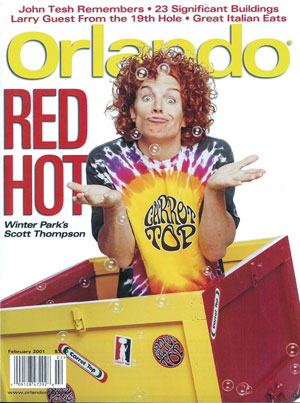 “It was a neighborhood crime watch sign I had hanging in my dorm,” he explains. “At the show I held it up and said, ‘How good is their crime watch if they’re not even watching their sign!’ That was my first joke. My first little laugh.”

Thrilled by the reaction and recognition that followed his act, his premiere performance was followed by another life-changing event. As he drove from Boca Raton to Palm Beach as a courier for a credit bureau, the undergrad’s curiosity was piqued by radio commercials promoting a Palm Beach comedy club. Attending a show at the Comedy Corner, he was astounded that professional comics like headliner Jeff Foxworthy were actually paid to be funny. Suddenly comedy had profit potential.

He upped his game by adding original material to his fledgling act and then started to test his routine off campus. Auditioning for a comedy club talent contest, the owner suggested he develop jokes that went beyond college humor.

“I literally went back to my dorm and started thinking of all these different props,” he remembers. “I invented a cowboy boot with a kickstand on it so you could get drunk and not fall over. When I went back and showed her, she said it was great—I was really onto it.”

After graduating from FAU in 1986, he focused his marketing degree on a single product: Carrot Top. But after initial success in South Florida, the gigs sputtered out. Thompson thought the game was up.

Ironically, it was only after quitting comedy that Thompson would find unimagined success. And it all happened thanks to an unlikely encounter at an Altamonte Springs restaurant.

When you drive down The Strip in Las Vegas where massive billboards feature Carrot Top’s image, you’ll understand Thompson’s place in the hierarchy of Vegas performers. You’ll also understand his popularity when you stand in line at the Luxor’s Atrium Theater where Carrot Top, who just turned 51, has been selling out shows since taking over the room in 2005.

While headlining a Vegas show seems unbelievable to Thompson today, in 1988 it was positively unimaginable. Then again, nearly everything seemed impossible for Thompson in 1988.

After leaving South Florida, he had little left in reserve financially or emotionally. Having given up on comedy, he sought safety in dead end jobs that promised steady paychecks and generous tips. Trudging through each day, he’d wake early to deliver bread for Pepperidge Farm and stay up late to shuck oysters at Calico Jack’s near the Altamonte Mall. Cleaning offices and working incidental jobs filled in his off hours and helped cover his modest expenses. But that still wasn’t enough. Although he could afford to put gas in his car, he couldn’t afford the car, which was repossessed.

“I was drained,” Thompson recalls candidly. “I had mono and I had no money and I never had enough hours to do all of these jobs. I was literally taking pennies out of jars just to go to the movies with my roommates.”

Then came the moment that changed his life. Thompson was working his night job at Calico Jack’s when two couples he was serving stared at him quizzically.

“They kept looking at me then said, ‘You remind us of a comedian we saw at a club in South Florida… .’ They told me how funny this guy was and how he had such an awesome act and how weird it was that I looked exactly like him.”

Embarrassed to be spotted behind a bar holding an oyster instead of onstage holding a microphone, Thompson’s nerves tightened as his secret identity was about to be revealed.

“Then they told me I couldn’t be that guy because that guy was way too funny to be shucking oysters. I couldn’t tell them that it really was me they were talking about. I had too much pride to tell them I was the comedian they had seen.

“After they left, though, all night I kept thinking about how much they loved my act. Later I went to the manager and said, ‘I think I might have to quit.’ ”

Break on Through to the Other Side

Even after his epiphany at Calico Jack’s, Thompson was reluctant to step away from a steady paycheck. Then he received a call from an agent that signaled epiphany, part two.

“Bob Baker called out of the blue and asked what I was doing. I told him I was shucking oysters.’’ The agent was incredulous. “I told him I had given up on comedy. I hadn’t done it in over a year.”

At the time, Baker had more confidence in Thompson than Thompson had in himself. After the reluctant comedian was booked at a club in Fort Myers, Thompson again realized his calling. With renewed confidence, he found his feet, his voice, and new opportunities. After hitting his stride with shows at small clubs (as well as strip joints, dive bars, and cafeterias) around the Southeast, he auditioned before the National Association of Campus Activities. Bringing down the house, he booked a record number of college gigs that day.

Carrot Top became a new vaudevillian, constantly on the road across America. He was an instant hit on college campuses as students fell for his combination of sophomoric humor and keen intelligence.

“It became a weird cult thing,” Thompson remembers. “Through word of mouth I was doing a show almost every night at a comedy club or a college campus. Then in 1992 I got a call from The Tonight Show and all of a sudden I’m on my first show with Jay Leno!”

Home Is Where the Heart Is

With Luxor providing the steady gig that he couldn’t land in South Florida, Thompson spends most of his time in Las Vegas. But when he’s not on The Strip, he’s on The Avenue.

“I love going on my scooter down Park,” he says of Winter Park’s main street, just a few minutes from the house he bought nearly 20 years ago. “I’ll have lunch at Prato and at the end of the day, I go out on my boat for what I call my sunset cruise. I take a bottle of wine, park my boat in the middle of the lake, and watch the sun go down.”

While anyone would be grateful for their fame and success, Thompson’s appreciation soars at stratospheric levels.

“I’m thankful beyond more than you know,” his pace faltering as he tries to find the words that accurately convey his gratitude. “Literally every time I land in Orlando and head to my house and then get on my boat… God strike me dead if I don’t, every day, thank the Lord for what I have.

“And I have to give props to my community,” he continues. “Orlando has been the best to me. People treat me… golden. They’re always nice, no one’s ever rotten, people are so friendly, they always say hello. I am so lucky to have people who like me.”

A couple of months ago, just before Christmas, many of those people who like him were at The Plaza Live! to watch the comedian in a rare hometown show.

Combining George Carlin’s style of observational humor with Gallagher’s prop comedy and Steven Wright’s dark humor, Carrot Top added a rock ‘n’ roll soundtrack and a surprising array of voices and impressions that captivated fans for 90 solid minutes. Weaving his way through props, sound effects, and lighting cues, he revisited his earliest visual inventions like a can of spray paint with a dictionary attached so kids can spell-check their graffiti, and an oversized supermarket bar code he could paste on the side of his car to confuse a cop’s radar gun (“What the hell! That can of creamed corn is doing 70!”). Rednecks were a favorite topic, as demonstrated by a redneck graduation mortarboard: a John Deere baseball cap with a tassel. Musicians, from Celine to Elton to Britney, were targets as was current favorite Mumford & Sons (“Mumford & Sons? That sounds like a moving company! For all your furniture-moving needs, call Mumford & Sons”).

That evening Scott Thompson knew he was among friends. The town that gave him his start was in his corner, and he was there for them. Stopping the action, he stepped off the stage to pour shots of whiskey while continuing a running monologue as he greeted old friends and recalled his favorite local haunts. He spoke of those long ago days when shucking oysters gave him a refuge from the more challenging arena of show business.

Thompson was clearly touched by this “welcome home” appearance.

“To all my friends and family, God bless you. Thank you for bringing me back to Orlando.”

Closing the show with a frenzied high-decibel finale, he pointed without comment to a large overhead screen as he left the stage. The words echoed back to his days at St. Mary’s Catholic School when his first starring role was ringing a bell at recess, and they revealed his appreciation for his fans: