The flavors at Nile, a 13-year mainstay of I-Drive, remains a dazzling discovery, with beef, chicken and vegetable dishes enhanced by otherworldly spices.

Perched at the top end of International Drive, in a part of town not quite as high end as its neighbors closer to the Convention Center, Nile is not the Orlando area’s first Ethiopian restaurant.

Blue Nile enticed our palates in the mid-1980s (the owners now operate a Blue Nile in Michigan); Sabina popped in and out of the scene in the late ’90s; Abyssinia Ethiopian Restaurant carried on in an Orange Blossom Trail location from 1999 to 2000. But it took the advent of Nile opening in 2006 to gift us with a lasting presence of wat, injera and strong black coffee.

Owner Abeba Gonetse says that during holidays in Orlando she would field several questions a day about the lack of a good local Ethiopian eatery. “It came to my mind,” she says, “that Orlando needed a different restaurant. I worked as an accountant in Addis Ababa, but I like to open my home and to cook. So why not?” 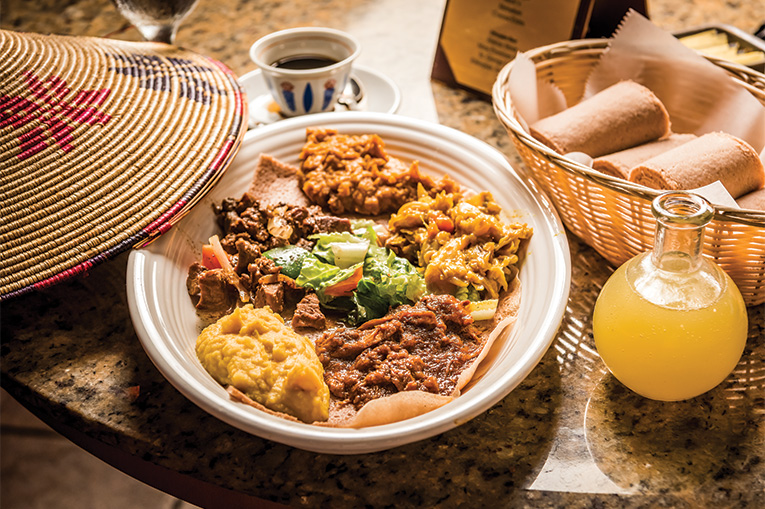 Injera (in basket) is the staple of a meal at Nile, accompanying dishes with fantastic flavors (ROBERTO GONZALEZ)

Gonetse is quick to mention that her restaurant’s take on Ethiopian food is organic and made from scratch. Spices are “from back home,” as is the flour for the great staple of the cuisine, injera bread.

The restaurant itself may not present the best of fronts, tucked to the side of a mall with a hookah lounge and Irish pub as neighbors (the not-a-chance-in-hell Orlando Sling Shot ride is across the street). But once you’re inside, it is a warm, inviting and very fragrant environment. Woven baskets and posters of the rock churches at Lalibela line the terra cotta colored walls; on a platform by the window is the makings of the famous coffee ceremony—more on that later.

A concise culinary vocabulary is sufficient to narrow down your choices, a rhythmic poetry of rich, flavorful food. Kitfo ($13.95) is beef tartare, blended in chili pepper, cardamom and cloves and perfumed with clarified butter seasoned by an exotic bounty: cumin, coriander, nutmeg, fenugreek and sacred basil. Plain raw beef this isn’t. Served with the ubiquitous injera, a fermented sourdough flatbread made from an ancient African grass called teff, it is a dish that demands contemplative eating.

The cuisine centers around beef, chicken and vegetables, all enhanced by an array of spices, both indigenous and borrowed from foreign cultures for centuries. The medicinal Ethiopian pepper that was used in ancient Rome before the discovery of black peppercorns, the basil-like verbena plant called koseret, black tikur azmud cumin and the seeds of a ginger plant called korarima join forces with Iranian ajwain caraway, strongly scented Bengali radhuni fruits and Asian fenugreek in sophisticated combinations. You cannot imagine these flavors without sampling them.

Historians point to Ethiopia as the birthplace of butchering and cooking meat, and the Amharic language still has multiple words for cuts and preparations of beef. Tibs, a way of stewing stir-fried meat, lends its name to sautéed zilzil strips and godin spicy short ribs. Gored gored, like kitfo, is served raw, but in chunks instead of ground. You’ll find the word wat on beef and chicken dishes, referring to a richly seasoned, slow-cooked stew.

Too many enticing choices, so Nile makes it easy: the Chef’s Special Combination for two ($29.95). The plate arrives concealed by a hand-woven wicker basket, uncovered to present an artist’s palette of colorful menu items placed upon a circle of injera bread with more alongside. Don’t make a rookie mistake by tearing off big pieces to pinch and hold the selections—just use a little, or you’ll fill up on bread rather than these amazing dishes. And it is customary to use your right hand, please. Chicken doro wat stew in red pepper sauce; doro alicha (the mild version); beef alicha in turmeric; the flavorful beef tibs; along with gomen cabbage cooked in garlic and ginger; collard greens; pink misir wat lentils; and yellow kik split peas—all are presented in enticing colors and interesting textures.

Awaze sauce—house made honey wine, oil and the heaven that is berbere spice, a blend of ingredients that rivals Mexican mole in complexity—can be judiciously sprinkled on everything.

With the meal done, ask for coffee. The arabica bean is the most widely consumed coffee in the world, and it is native to Ethiopia, Africa’s largest producer. In the restaurant, green beans are hand roasted in a flat pan over hot coals, ground in a pestle and brewed in a black clay pot called a jebena. Poured into small cups, the coffee is usually consumed with a generous amount of sugar, and the ceremony, even in a restaurant setting, is considered a symbol of respect and friendship.

“My customers are like my family,” Abeba Gonetse says. “They are everything to me.”

It’s good to be treated like family, and enjoy such fascinating flavors.

Echoing the woven basket covers that unveil the entrée combination platter are mesob wicker tables, nestled in straw hut booths along one side of Nile and designed for multi-course meals shared by family. The serving tables, a gift of the Harari culture, have been made since the 13th century from dried grasses and straw by Ethiopian Islamic and Jewish women, and the ancient patterns tell stories of culture, religion and traditions