Nonsurgical methods battle the folds and lines of aging.

As men and women continue to battle against the inevitable march of time, there’s a growing arsenal of products that can fight deep lines, sagging cheeks and other facial signs of aging.

Dr. Bonnie Dean, of Longenix Anti Aging & Optimal Health Center in southwest Orlando, says it’s important to view the situation on three fronts: the surface of the skin, where coarsening, fine wrinkling and discoloration can be seen; the fatty middle layer, where youthful curves are lost as volume dissipates, leaving the skin to fall into unattractive folds; and the deeper muscle layer, where crow’s feet and frown lines originate. Each of these three layers must be targeted with different products and practices.

Skimming the Surface
Plenty of over-the-counter topical lotions and other products promise to reduce fine, superficial lines, and some of them do yield noticeable results. However, there are more surefire methods to combat those lines, as well as improve the texture and color of surface skin. Chemical peels and ablative lasers, which should be performed by a qualified aesthetician or physician, essentially remove the very top portion of the skin, leaving fresher-looking skin in its place.
But for wrinkles that originate in the deeper layers, topical applications aren’t going to do much. For those, it’s time to take out the big guns. Or needles, anyway.

Hit Me with Your Best Shot
For the middle layer, injectables that go straight to the problem areas are an attractive alternative to surgical implants. “Every year, a person loses a teaspoon of volume” in the facial area, says Dean. “If you have the same skin on the outside and you’re losing volume inside, you get a droop.”

The earliest forerunner to today’s current crop of injectable fillers is collagen, which has been used since the 1970s. Downsides include a lifespan of only a few months or so and potential allergic reactions, although newer versions of collagen derived from human collagen have lower rates of such reactions. The human collagen is sold under brand names such as Cosmoderm and Cosmoplast, and costs $350 and up.

To restore fullness to those wrinkled folds of skin that result from volume loss, Dean recommends a filler that creates a semipermanent support structure within the skin. As tissue builds around this microscopic structure, wrinkles fill and skin looks firmer and fuller. Results usually last up to two years; brand names to look for are Radiesse and Artefill. The cost starts around $600.

A shorter-lasting and softer alternative is formulated with hyaluronic acid to attract and bind water molecules to the injected area, making it fuller and more youthful looking. Not only is the result softer to the touch than the semipermanent injectables, it is also reversible with an enzyme injection, an option semipermanents don’t offer. One drawback is that hyaluronics only last about a year at best. Some of the labels are Perlane, Restylane and Juvéderm, and costs start at about $400.

Other fillers include those that may stimulate production of the body’s own collagen. Brand names include Sculptra and Fascian, and the result lasts longer than standard collagen injections. Prices start at about $300 for Fascian and almost twice that for Sculptra.

Fat transfer is another option. Using the patient’s own fat, harvested through low-power liposuction, fat transfer is considered one of the safest ways to combat wrinkles through injection. It also boasts results that can last for years. The procedure is often called microlipoinjection, known by the NaturalFill brand name. The cost can be as little as a few hundred dollars if only a small amount is removed and transferred, but the total cost can be thousands if combined with more extensive liposuction.

More than Skin Deep
Going after the deeper source of muscle-produced facial wrinkles is the most effective way to eliminate frown grooves and laugh lines, notes Dean. As we age, she says, the muscles we use for facial expressions tend to strengthen, turning some of the creases and wrinkles that form when we smile, squint or frown into permanent facial fixtures.

The best—and most well-known—way to counter this is by injecting a diluted form of the botulinum toxin, a neurotoxic protein that temporarily relaxes (paralyzes, really) the targeted muscle. It’s best known by the brand name Botox, but is also sold under names such as Dysport, Mybloc, Neurobloc, Xeomin and Vistabel. Some practitioners charge by the overall area treated, but this type of injectable is typically sold by the unit, with the number of units required depending on the area being treated. Units can cost $10 to $15 each, and long-range planners can “bank their Botox” by purchasing at a discount a large number of units to be used over time. 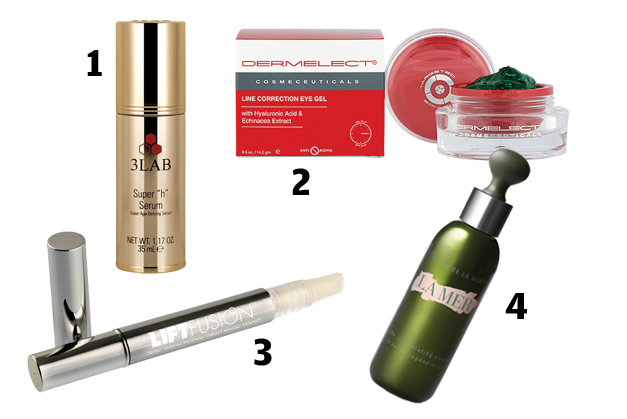 2. Demelect Cosmeceuticals’ Line Correction Eye Gel moisturizes, smoothes and softens and while decreasing the look of wrinkles. $34 at dermelect.com.

4. New in stores this month is La Mer’s The Regenerating Serum, which combines a variety of exclusive anti-aging ingredients to rejuvenate skin for a fresher, smoother, renewed appearance.  $250 at Saks Fifth Avenue at The Florida Mall and Nieman Marcus at The Mall at Millenia.

This article appears in the March 2010 issue of Orlando Magazine.
Categories: Health & Beauty