Left vs. Right: Getting Our Heads Around Brain & Hand Dominance

How are we really wired? Experts weigh in with mind-blowing insights. 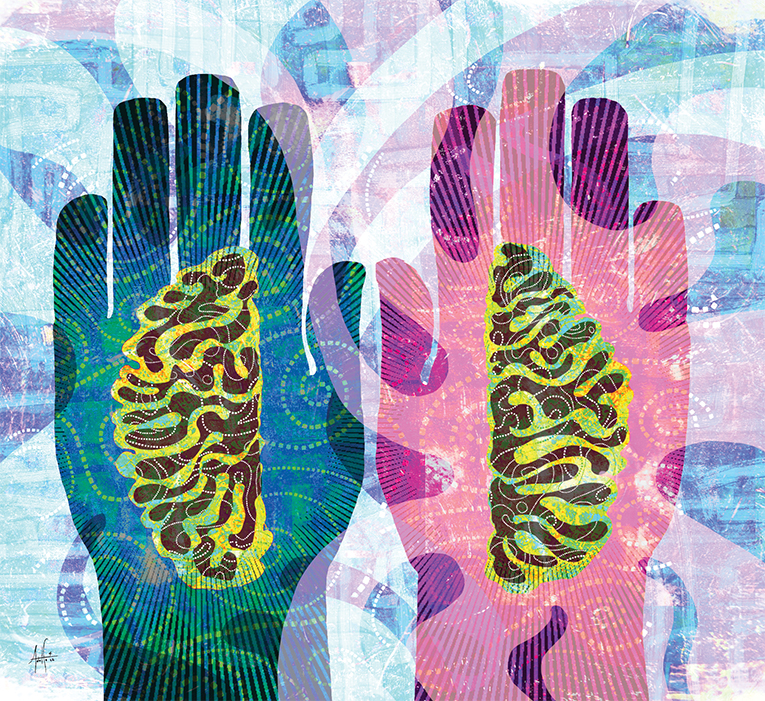 Are you a creative professional who struggles with organization? Or are you logical and a little short on compassion? You may be used to attributing your personality to brain or hand dominance, but keep an open mind, because the science isn’t quite that simple.

Neurosurgeon Dr. Nizam Razack of the Spine & Brain Neurosurgery Center in Orlando and Lake Mary says it’s more a matter of nurture than nature. Handedness is a genetic trait, he says, with about 90 percent of humans preferring their right hands. But it doesn’t dictate disposition or tendencies, he adds. Razack also dispels the notion that people are primarily ruled by one hemisphere of their brains—for instance, being sensitive as a result of right-brained dominance or being analytical because of left-brain dominance. In fact, a 2013 University of Utah study found no evidence for brain dominance.

“Just having that genetic predisposition to be right or left-handed doesn’t affect your capacity for learning. It doesn’t affect your capacity to get information and use that information to make judgments or cognitive decisions,” Razack says. Your ability to take in and process information results from your brain structure, not from hand or brain dominance, he adds. As for personalities, they are “strongly influenced by their environments or mental factors growing up—by their parents, for example.”

But University of Central Florida Professor and Neuroscience Division Head Dr. Kiminobu Sugaya believes nature takes a larger role. Left and right-handed people “have a different way of using the brain,” he says. “Lefties tend to be very sensitive and very talented in general.” But we can’t look at the brain in terms of “this side is the logical; this side is emotional. We’re using both sides of the brain for … different types of emotion.”

The brain processes emotion in the amygdala, Sugaya explains. The right side processes fear and sadness, while the left side processes fight-or-flight responses. “A lefty tends to use the left side of the amygdala for dangerous situations. Right-handed people use the right side of the amygdala for emotion in dangerous situations,” he says. Though Sugaya says handedness affects personality, righties and lefties have been dealt an even hand in terms of IQ.

As for southpaws, history shows they have never had the upper hand, with some having been treated as outcasts. Research has increased the stigmatization as some studies have linked left-handedness with a greater risk of schizophrenia, learning disorders or neurodegenerative diseases. But they also historically have had an advantage in sports and in combat.

And if you like to call out your mom or kindergarten teacher for forcing you to use your right hand instead of your left, consider thanking them instead. They helped you become more adaptable and forced you to expand the superhighway of nerves that connect the two hemispheres of your brain, Razack and Sugaya agree. If you’re ambidextrous, that can either be the product of that adaptation, or it can be genetic.

In fact, Razack says we all can benefit cognitively from using our non-dominant hands for various tasks. “If someone practices writing with their left hand, they will get better with time, especially if they do it at a young age where there’s that adaptability factor,” he says.