With mixed martial arts training, you won’t have to pull any punches to get fit.

In an industrial-looking gym on Colonial Drive, pairs of 22 men and women wearing boxing gloves and shin pads take turns executing jabs, hooks and kicks in patterns called out by their instructor. At the end of the hour-long session, they’re smiling, chatting, and mopping sweat. No one is injured because the designated “opponent” in each pair holds a pad for protection.

These hardy souls have just completed a kickboxing class at The Jungle MMA & Fitness gym in Orlando. The Jungle is one of many Central Florida gyms specializing in one of the hottest trends in fitness training: mixed martial arts. 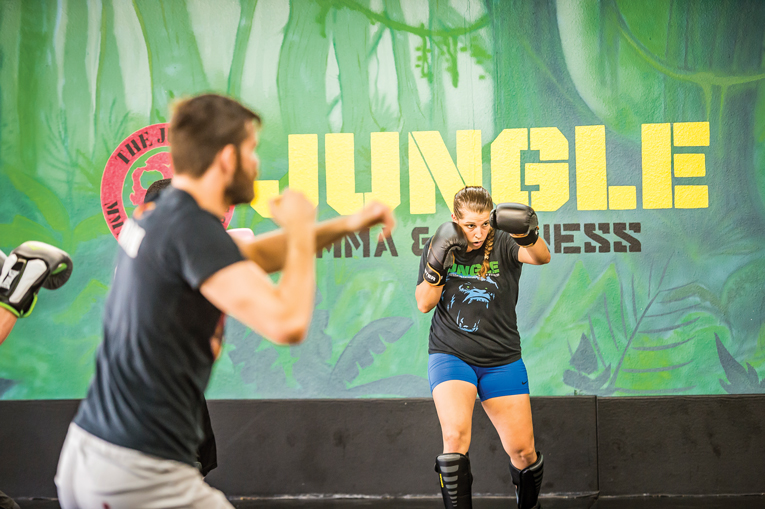 “Thanks in part to the hugely popular Ronda Rousey and 2015’s high-grossing movie The Avengers, martial arts are having a moment,” declares Men’s Fitness magazine. Participants not only learn self-defense skills, the magazine says, they get an incredible workout “that improves coordination, balance and power.”

Jonathan Burke, owner of Winter Garden-based 6 Levels Orlando, describes MMA as “a combination of grappling and striking arts.” Different gyms offer different combinations of martial arts techniques, but the most common are jiu-jitsu, boxing, and kickboxing. Clients learn to punch, kick, and use their elbows and knees to take down opponents or defend against certain moves.

Each martial art is a full-body workout, instructors say. “You learn a technique, pair up with a partner and start practicing the technique,” says Burke. “You’re using your body in ways you’ve never used it before, affecting muscles you’ve never used before. When we do drills or sparring, wrestling or grappling against each other, it’s an exhausting workout. Your core, legs, hips, biceps, and back are being used.”

Most MMA fitness fans take classes at least three times a week. Besides the intensity of the workouts, MMA offers variety that clients like.

“It’s something new every day,” says Felicia Spencer, an instructor at The Jungle. “You’ll never be bored. You’ll get fit while you’re learning and doing something fun instead of doing something repetitive.”

Of course, the fun techniques you’re learning are combat-oriented, and about 50 percent of their members are interested in self-defense as well as fitness, say Burke and Mike Lee, owner of The Jungle.

Mixed martial arts training can give women an edge if they’re victims of assault, but it’s an edge that must be kept sharp. “I hear too many women say, ‘I took a self-defense class and don’t need anything else,’ ” Lee says. “Continual education is the way.”

Burke agrees. “It’s a perishable skill. It’s like going to the gym and working out one time. You need to be consistent,” he says. 6 Levels offers a five-week women’s self-defense program, and Burke recommends that women “do refreshers every so often” to maintain muscle memory.

MMA has the potential to change a person’s lifestyle, Spencer says. As clients learn new techniques and start to look and feel better, they start eating better and practicing individual martial arts for mental as well as physical strengthening.