It’s Only Dinner—or Maybe It Isn’t

Wherever you are in a relationship, there’s a restaurant to suit the occasion.

Take your new potential sweetie for a bite under the stars at Orlando’s landmark lake.  Open until 10:30 p.m. on Fridays and Saturdays, the very casual Relax Grill features dishes like a Mediterranean platter of hummus, falafel and red pepper dip ($11) and shrimp kabobs ($16) in an al-fresco setting.  Romance might be in the air after a stroll around the lake. 211 Eola Parkway, Orlando, 407-425-8440; relaxgrill.com 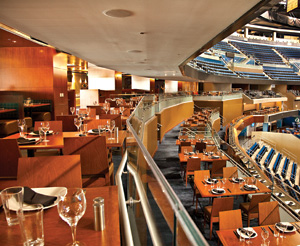 Got Game?
Jernigan’s at Amway Center

You want to see a Magic game, but your object of affection isn’t into sports. But who isn’t up for dining out? Settle in at Jernigan’s, the all-you-can-eat restaurant with balcony seating overlooking Amway Center’s basketball court. For the price of game tickets, plus Jernigan’s $39.95 per person charge, you may win your date over to watching the Magic with you. 400 W. Church St., Orlando, 407-440-7000; amwaycenter.com/restaurants-and-bars 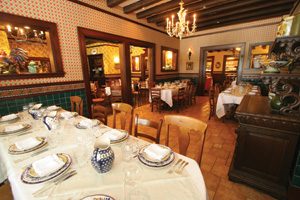 The “this may be the one” date calls for cozy and romantic. Mama Della’s is a little slice of Genoa, and surprisingly intimate for a hotel restaurant. Dinner for two with wine will set you back around $100, and the branzino del Mediterraneo ($29)—bass with pappardelle pasta and fennel—is highly recommended. Embrace the illusion by strolling hand-in-hand around the reproduction Italian village of Portofino Bay. You’ll think you’ve left Orlando, at least for the night. 5601 Universal Blvd., Orlando, 407-503-3463; loewshotels.com/restaurants/mama-della-s-ristorante 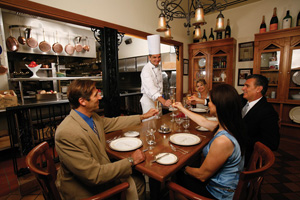 WHEN SHE is ‘The One’
Victoria & Albert’s Chefs Table

You can’t get a much better opening act for an engagement proposal than the four-hour, 13-course spectacle that is a meal at V&A’s chefs table. At $245 per person with wine pairings, it’s an extravagant setup to popping the question, but truffles fresh from Italy, Japanese Kobe beef and Scottish pheasant, personally served by chef Scott Hunnel, doesn’t come cheap. The extraordinary and ever-changing menu for this intimate evening (only 10 seats per night) could be the deciding factor when you’re looking for a yes. 4401 Grand Floridian Way, Lake Buena Vista, 407-939-3862; victoria-alberts.com 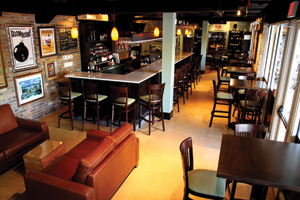 This article appears in the February 2012 issue of Orlando Magazine.
Categories: Dining, Features
Tags: there’s a restaurant to suit the occasion., Wherever you are in a relationship