Our critic looks ahead at all of the dining options in store. 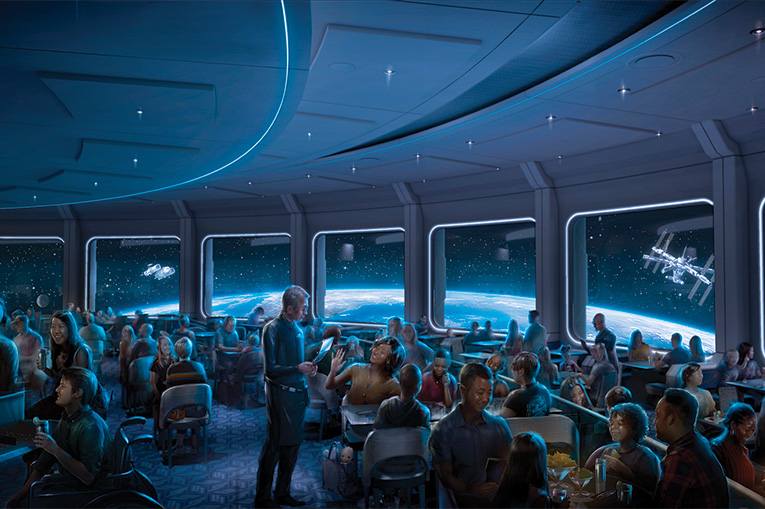 For adventure seekers and theme park food fans, new eateries at the attractions are a character-driven adrenaline rush. Between what has been added in the past several months and what is on the horizon, the landscape is very much a movable feast.

Disney Theme Parks
In a grand update fever, Epcot is completely rebuilding the front half of the park, including the construction of an “out of this world” restaurant called Space 220. Slated for a 2019 opening, the international space station motif extends to an entrance via elevators with video screens and simulated motion that gives the illusion of traveling above the stratosphere. The 350+ seat restaurant itself substitutes windows with 250-foot digital monitors of views from orbit.

American Adventure Pavilion’s Liberty Inn, known for burgers and salads, will be replaced at Epcot this year by Regal Eagle Smokehouse: Craft Drafts & Barbecue, with an enormous in-house smoker and craft beers on tap.

Opening by summer 2020 at Epcot’s France Pavilion, a new indoor “dark” ride called Remy’s Ratatouille Adventure will be complemented by La Crêperie de Paris, both a Brittany-themed table restaurant and walk-up takeaway counter devised by celebrity chef Jérôme Bocuse of Chefs de France and Monsieur Paul, to spotlight both sweet crêpes and savory galettes. As neither existing Bocuse restaurant features crêpes, this should give the kitchen a chance to feature the famous crêpes Suzette of his legendary father, Paul. And since it is his favorite breakfast, I’ll assume gaufres (French waffles) will be on Jérôme’s list.

The already open, multi-roomed Takumi-Tei brings a fourth restaurant to Epcot’s Japan Pavilion. The stunning restaurant has a focus on Japanese whiskey and an upscale blend of traditional and ultra-modern cuisine. With selections emphasizing Japanese and American-raised Wagyu beef, immaculately crafted sushi and course options that can mean a four-hour meal, the refined menu also offers a multi-course omakase tasting menu that starts at $130.

Hollywood Studios, overrun by Star Wars attractions, has added smuggler-favorite watering hole Oga’s Cantina and several other locations to the Galaxy’s Edge culinary palate (here). There are actually some things at the park not Star Wars related. Case in point: the upcoming Roundup Rodeo BBQ, a Toy Story Land restaurant filled with characters and a family-friendly menu. No opening date has been announced.

By the way, if you’re of the vegetarian persuasion, make sure to seek out the “Plant Based Cuisine” guide at the Magic Kingdom.

Disney Springs
We have already reported about the 2019 openings of Wolfgang Puck Bar & Grill and Jaleo by José Andrés. Add to that list Beatrix, with an upscale casual menu including many vegetarian, vegan and gluten-free options (and a slow-baked caramel custard pie that will be the next local craze), to replace the recently shuttered Bongo’s Cuban Café sometime next year.

City Works Eatery & Pour House opens shortly at Disney Springs West Side—it’s basically a giant sports bar with 80 beers on tap and a burgers, barbecue and bar bites menu. Plus, it will connect to the recently completed NBA Experience.

Disney-Area Hotels
Disney’s Coronado Springs Resort has already made a splash with Toledo, the impressive 16th-floor Spanish restaurant decked out in the avant-garde style of surrealist Salvador Dali, with a menu of pintxos, house-made Spanish charcuterie and grilled steaks designed by chef Robby Sayles, formerly of Animal Kingdom’s Tiffins. Any fish selection (golden tilefish as of this writing) is worth any price. Down at ground level is the open air Three Bridges Bar & Grill, surrounded by “Lago Dorado” lake, serving sandwiches, shareable Spanish plates and cocktails: The harissa lamb chops and smoked paprika fries deserve your attention.

In December, the Riviera Resort opens its rooftop Topolino’s Terrace-Flavors of the Riviera, a signature restaurant of Italian and French themes for dinner, with a prix fixe character breakfast.

Up ahead: Disney has shown concept drawings for the nature-themed Reflections-A Disney Lakeside Lodge, including a Princess and the Frog-themed restaurant. Wonder if frog legs will be banned, à la the Peabody ducks?

There’s no way of knowing what food the planned Universal’s massive Epic Universe theme park(s) will bring once it opens (we’re talking years from now), but with a new Harry Potter land and CityWalk-like retail promenade, there will be a lot. 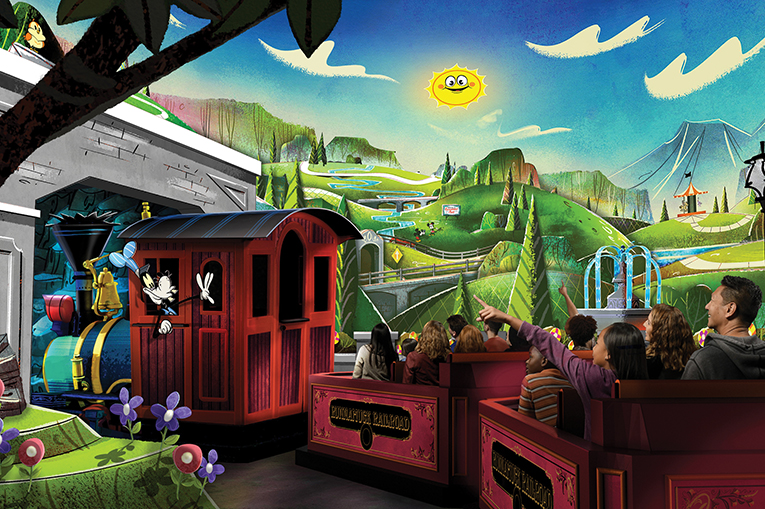 Universal-Area Hotels
Surfside Inn and Suites, the first of two Endless Summer Resorts, echoes the fast-casual setup at sister resort Aventura with Beach Break Café, a food court open for breakfast, lunch and dinner “in the laid-back SoCal surfer-inspired tradition.” Dockside Inn and Suites, the second Endless Summer hotel, is scheduled to open in March 2020 with a similar setup.

This article appears in the November 2019 issue of Orlando Magazine.
Categories: News and Features, News and Features More Links
Tags: dining, disney, food, Theme, theme-parks, universal
Want to read the whole issue? Download and read this issue and others on Magzter.