Finest Doctors of 2020: A Unique Calling

Infectious disease specialists delve into both detective work and treatment. 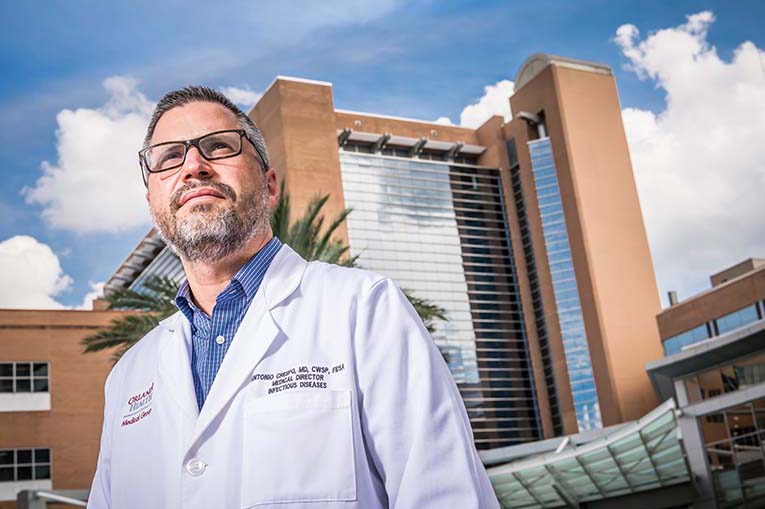 Dr. Antonio Crespo: “We pretty much treat everything.” (ROBERTO GONZALEZ)

When not in the midst of COVID-19, infectious disease specialists handle numerous other complex infections from hospital-acquired “super bugs” and tick-borne Lyme disease to complications from HIV/AIDS, pneumonia or influenza, among others.

According to the American Medical Association, there are currently some 8,300 doctors in the United States board certified by the American Board of Internal Medicine in this medical subspecialty, plus an additional 1,553 doctors who specialize in pediatric infectious diseases.

What draws physicians to the field varies from the lure of detective work, they say, to the ever-changing nature of human disease itself.

For Crespo, as the son of a physician, his interest in medicine came early, he says, while a specific interest in infectious diseases developed later in medical school. Not only did he like figuring out which organisms caused which disease, he says, he liked that “even when you can’t cure many of these diseases, you can control them.”

One, the immune crippling disease known as AIDS, sparked a global pandemic in the 1980s. Although there’s no vaccine cure for this disease even today, Crespo says, when new drugs came along to harness the human immunodeficiency virus that causes it, “I suddenly saw a lot of people whose disease was well managed; I saw AIDS change into a chronic illness.”

The ability to unravel complex and mysterious infections also held appeal for Dr. Victor Herrera, associate medical officer at AdventHealth in Orlando. “Sometimes, there are cases where a patient has a high fever and no one else can figure it out,” he says “So, yes, that attracted me to the specialty.” And he likes the intense one-on-one interaction with patients, which often provides needed clues to their illness.

“We have to explore a lot of personal information, to know as much as we can about each patient,”  Herrera says, citing, for example, whether a patient has a pet at home—a possible source of infection in an animal-to-human transmission of a zoonotic disease.

Although Herrera spends some of his days in a lab, given a research interest in diagnostics, he says, he divides the work of most infectious disease doctors into two main areas: inpatient hospital care where infections tend to be more serious and often the consequence of underlying health issues, such as diabetes; and outpatient care, where the emphasis is on prevention of diseases often seen in the local community.

Some practices focus only on the latter. At Orlando Immunology Center, for one, the three infectious disease specialists there see no hospitalized patients, dealing only with outpatient illnesses, says Dr. Federico Hinestrosa, one of the physicians.

A majority of the 21-year-old private practice’s business has to do with managing HIV, he says, to prevent the disease in people who are at highest risk. But they also see patients with other viral illnesses, such as hepatitis B and C. And, plans are reportedly under way to begin recruiting patients to one of three major COVID-19 clinical trials, though no details are yet available.

This article appears in the December 2020 issue of Orlando Magazine.
Categories: Doctors
Tags: Dr. Antonio Crespo, finest doctors
Want to read the whole issue? Download and read this issue and others on Magzter.