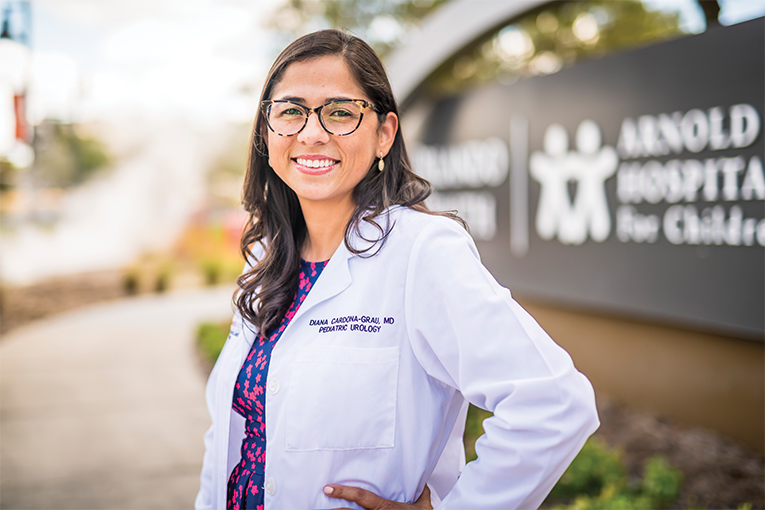 One reason I love pediatric urology is that I get to create long-lasting relationships with my patients and their families. Whether they need surgery or not, I’ve provided care to some children for many years, sometimes from birth. It’s so rewarding to see them grow and thrive.

One young boy has been particularly memorable, as I first operated on him when he was just a week old. After he turned two, I had to perform a complex reconstructive surgery on his genitourinary tract. It was a scary and overwhelming time for his family, but he came through the procedure and is doing well today. When I see him for regular follow-ups, his mother says he asks to “bring Dr. Diana home with him.” It is a great privilege to care for children, and I feel honored to be a part of their life stories. 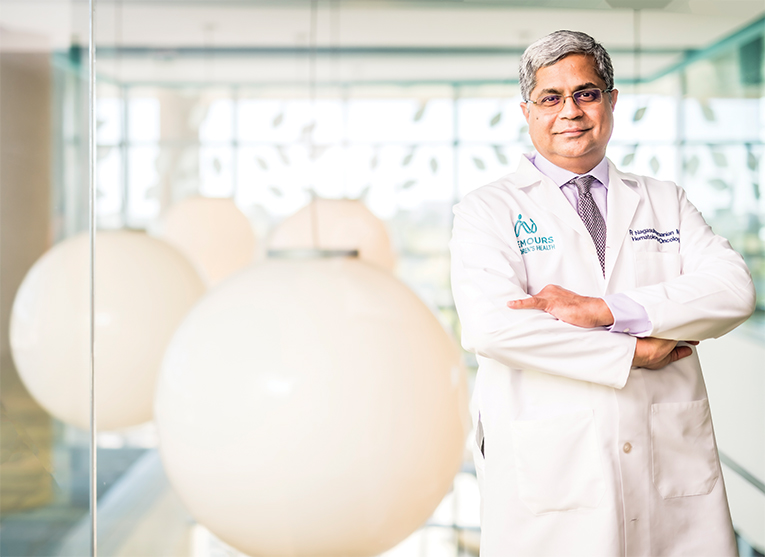 In my 33 years as a physician, my most memorable moment is from about seven years ago when, for the first time, I could feel the difference we were making in the lives of the children we care for. The patient had an aggressive head and neck cancer that was not responding to treatments.

I was so fortunate to be part of a team that could use a breakthrough drug, though, at the time, we did not know the response it would have.

The first assessment after treatment involved scans, and I was thrilled to share what a dramatic response we saw. When I asked the dad if the child had any side effects, he said, “Yes. Happiness.” It was such a pleasant surprise.

Over the years, I have seen many side effects, but this was something new that led to a paradigm change in cancer treatment. I was so proud professionally to be among the first to treat a patient with that breakthrough drug. 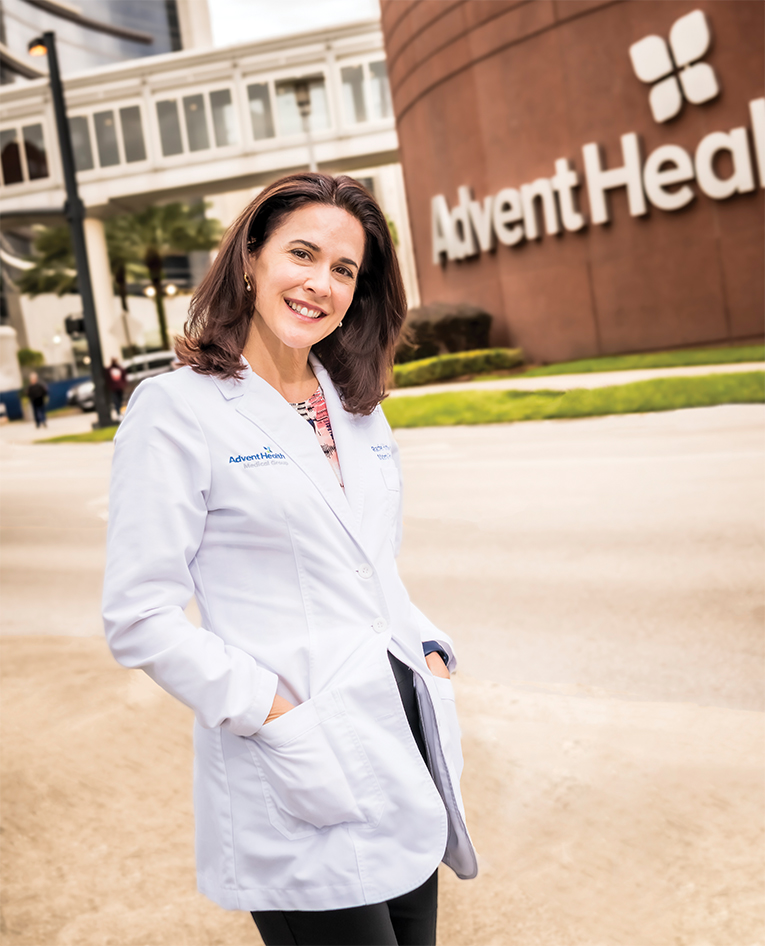 I vividly remember the night, early on in my career, when I received a call regarding a pregnant woman who was full term and at risk of bleeding to death and losing her baby. Her placenta had separated, and the baby was not getting oxygen. I knew that to save them both, immediate action was needed. This was the first time I performed a cesarean section in which anesthesia, the surgery incision and the delivery occurred almost simultaneously, allowing us to save the mother and her new baby girl. I am touched to still receive letters from the family about their daughter, who is now 18 years old! Special moments like these continue to remind me of how humbled and honored I am to work alongside our highly trained maternal-fetal team at AdventHealth for Women. Our high-risk physicians, nurses and staff provide advanced clinical care to expecting mothers and their babies every day. 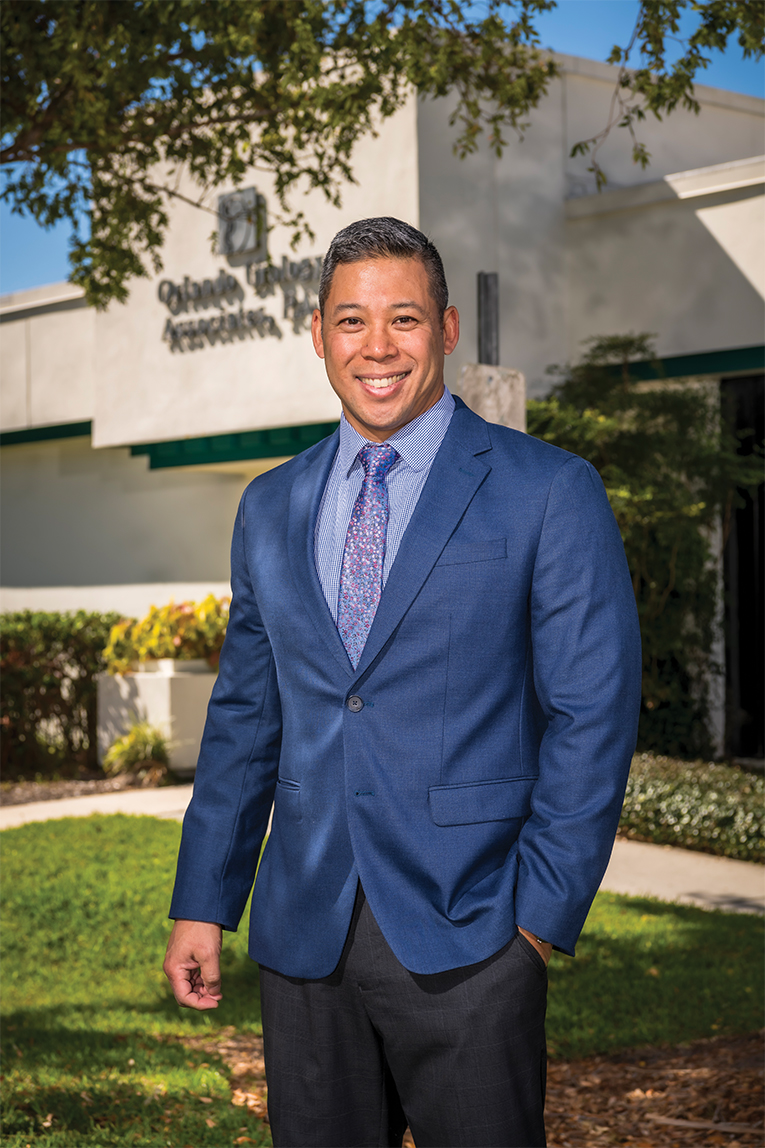 In my 17 years of practice as a urologist, I have had the opportunity to take care of many amazing people. It is also wonderful to see how advances in technology have made treatment less invasive and more effective. One of my first patients was a lady who came to my office with severe back pain and blood in her urine. Imaging showed a large kidney mass with possible spread to the lungs.

After I performed a minimally invasive surgery to remove the kidney cancer, I worked closely with her medical oncologist and primary physician to manage her care. The lung lesions returned despite chemotherapy. She was devastated with the diagnosis. A new treatment became available, and she received immunotherapy for her cancer. She is in remission 10 years later.

She is thrilled to have her life back, and she tells me about her life events every year I see her. Cases like hers are a humbling reminder of how we touch people’s lives. 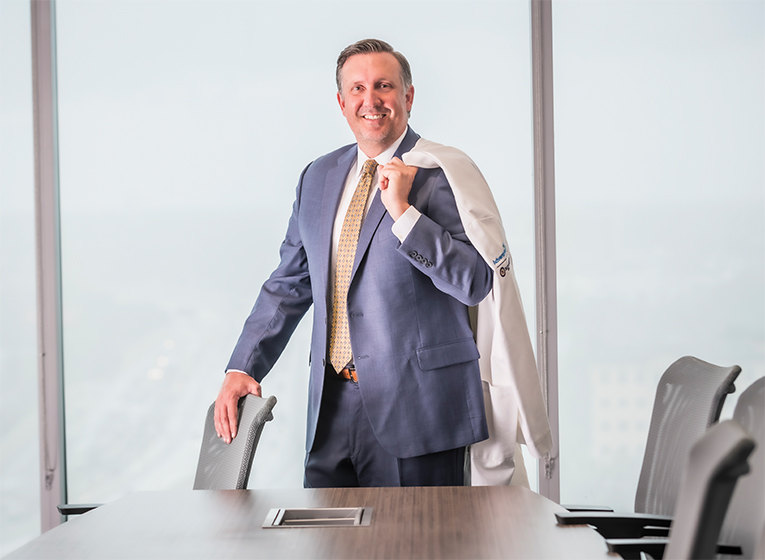 I remember caring for an injured high school star athlete, who sustained a significant knee dislocation during a football game. Due to the complex injury, he was very concerned if he’d ever play football again. I realized that this young athlete’s whole life trajectory could have changed with his injury that night. With that in mind, I performed a leading-edge surgical procedure called a multiligament knee reconstruction, allowing him full range of motion and a full recovery. I am heartened that this patient not only eagerly returned to the field but is currently living out his dream of playing Division 1 college football. Because the physicians at Rothman Orthopaedics each subspecialize in specific joints of the body, we can provide the most advanced surgical techniques for our specific areas of expertise as well as non-surgical options, resulting in the best outcomes for our patients. 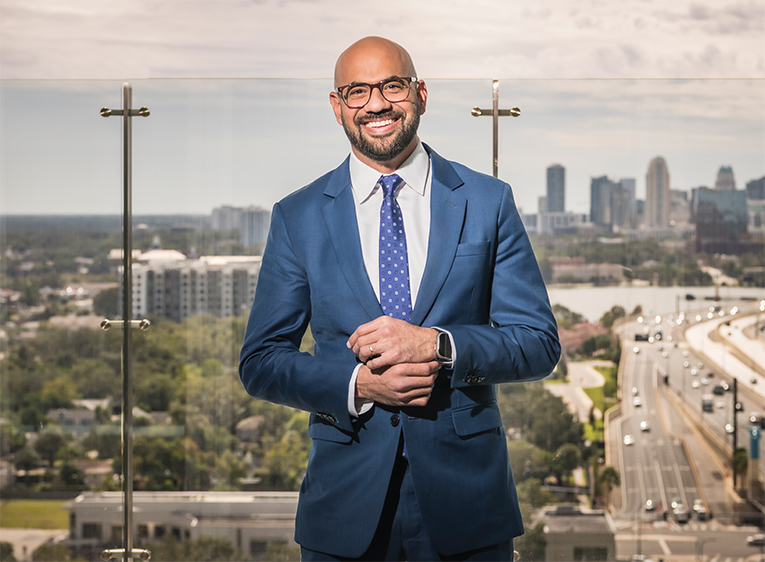 Several years ago on a flight, an attendant urgently asked if a doctor was on board. An elderly gentleman was having difficulty breathing. I immediately began examining him, but over the sound of the plane’s engine, it was difficult to hear his breathing with the provided stethoscope. I remembered something I learned during residency. I cut the stethoscope in half, which shortened the distance the sound had to travel, allowing me to listen to the patient more clearly. I started him on IV medication and provided multiple nebulizer treatments. His breathing stabilized, possibly saving his life, and preventing the plane from an emergency landing. I relate this story in my current field of medicine of colorectal surgery, in which innovative techniques are often critical. I enjoy collaborating with my fellow physicians to pioneer procedures and technologies that help deliver the most advanced care for our patients. 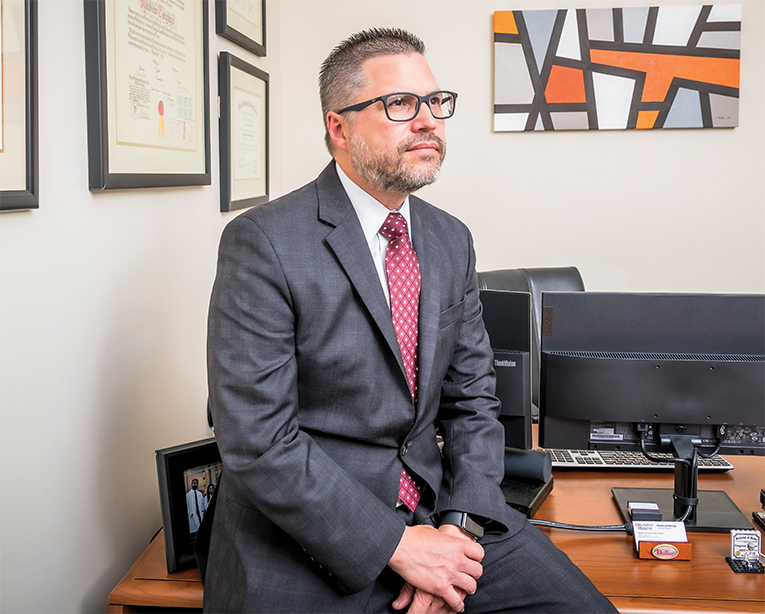 My first encounter with a patient is very important, especially someone diagnosed with HIV. I can sense their fear and uncertainty about a disease that was considered terminal not long ago. It’s a defining moment in their medical journey, so I answer their questions with compassion, empathy, clarity, honesty, and hope. There are patients whose progress I’ve been following since I came to Orlando 20 years ago. I’ll never forget my first appointment with a woman who was diagnosed with HIV after a miscarriage. She was afraid her life would be over. But after treatment, she later delivered a healthy baby, who is now a teenager. Some patients are very sick when they’re diagnosed. It’s difficult for them to believe that they’ll recover and have a normal life. I always tell them, “Yes, you have a disease that up to this day, we cannot cure, but we can control it. We’re going to get through this together.” 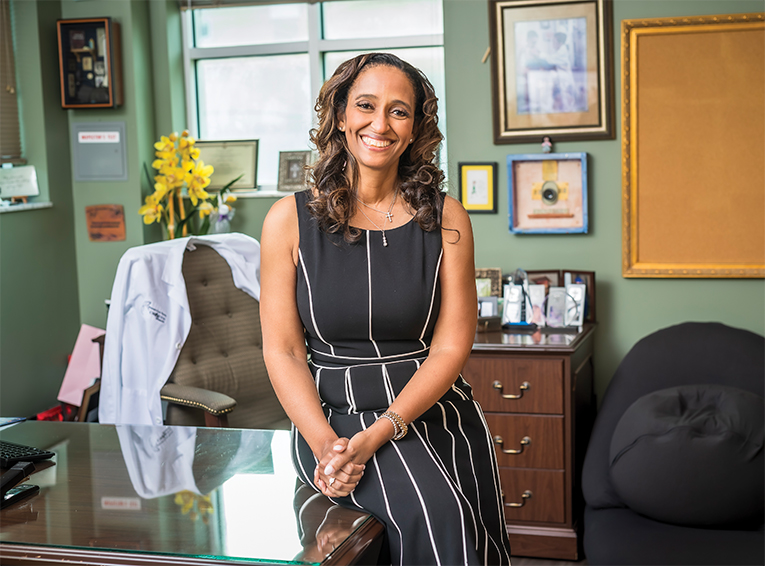 Infertility has many causes. It is stressful but can ultimately be joyous when we are successful. One patient that comes to mind is a young woman with multiple fibroids who desired pregnancy. After we reviewed all her options, we decided her best option was a myomectomy, which is removal of the fibroids. She underwent a successful surgery. I removed 13 fibroids. Post-op, we discussed there were no guarantees, especially because of the large number of fibroids. She became pregnant within nine months. We were ecstatic! Our first ultrasound showed twins. She was considered high risk, would require a cesarean section, and we saw each other often. At 38 weeks, she called me during my son’s basketball game on a Saturday to tell me she was in labor. I made it to the hospital and delivered two healthy boys. Being involved in making families is an indescribable gift and blessing. 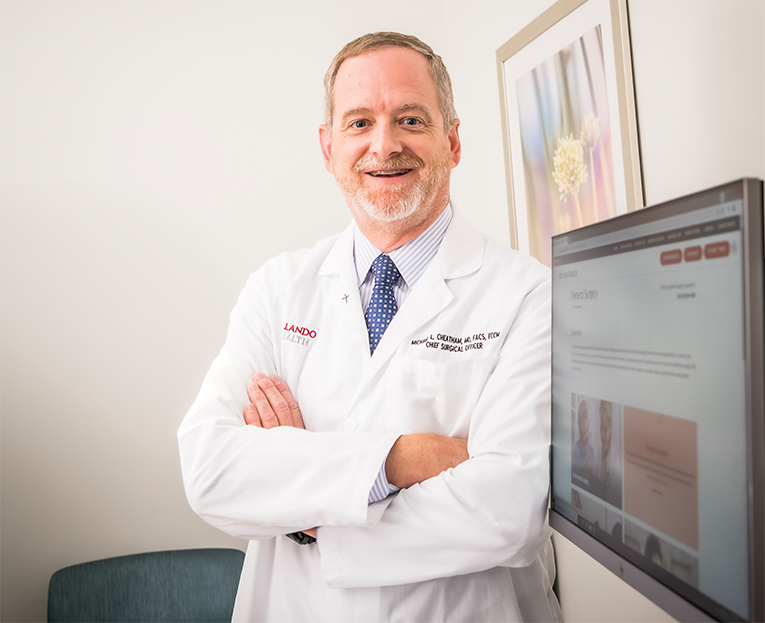 My father was a neurosurgeon, and the way we spent time together on weekends was for me to accompany him on hospital rounds. Since age five I wanted to be a neurosurgeon too. My interests changed in medical school while on a medical mission to rural Africa. I found that surgical patients’ needs were different. I had to rely on old-fashioned skills, like physical examination, to diagnose and do more with less. I learned that as a general and trauma surgeon, I could better meet the needs in the developing world. The experience shaped me as a surgeon at our Level One trauma center and allowed me to volunteer on five continents. It encouraged me to help prepare doctors and nurses for medical missions. Here, I’m one of many surgeons. In another country, I may be one of a handful of physicians for thousands of patients waiting months or years for healthcare. It’s gratifying to help restore health for patients in need. 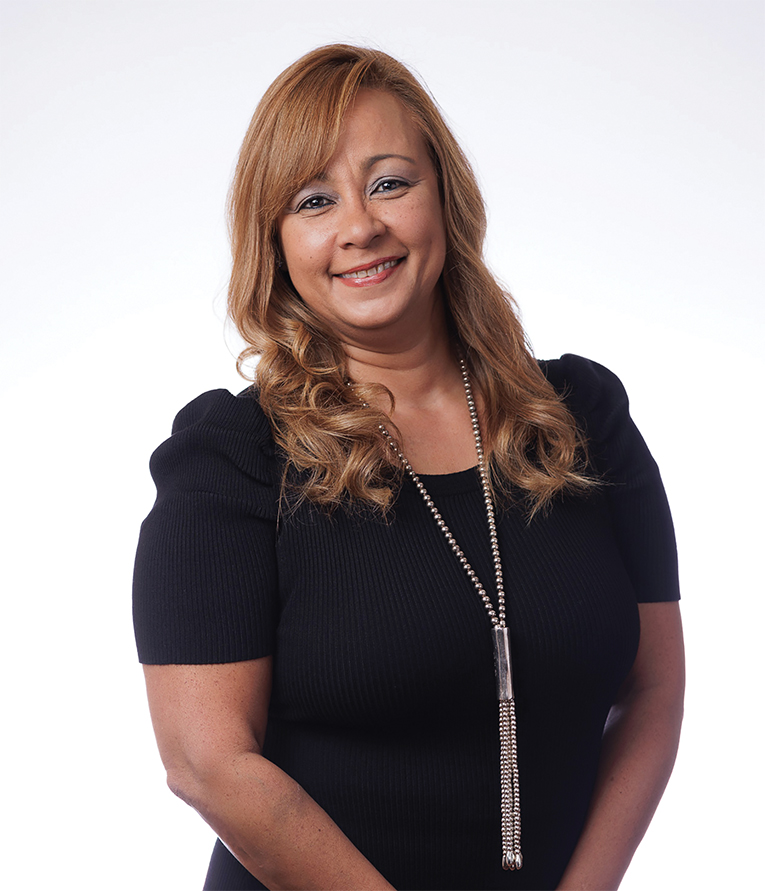 Becoming a doctor was all I wanted to be since I was a little girl, so needless to say, I am living my dream. I was born and raised in Puerto Rico, where I received my medical degree. As a female Hispanic gastroenterologist in Central Florida, it has been my pleasure to assist and provide care to many in their own language. That makes patients more comfortable. Being a doctor is my honor, a privilege that comes with a responsibility to be the patient’s advocate.
One of my most memorable moments in my career is when I took care of a patient with unexplained weight loss. The insurance company denied the CT scan despite my appeal through a phone call to the insurance company. The patient paid for the study, which showed a very small lesion in the liver. I referred the patient to the surgeon, who removed two small lesions that turned out to be metastatic pancreatic cancer. It has been three years since then, and she is still my patient.