The legendary documentary nature series returns to the air in January 2023. 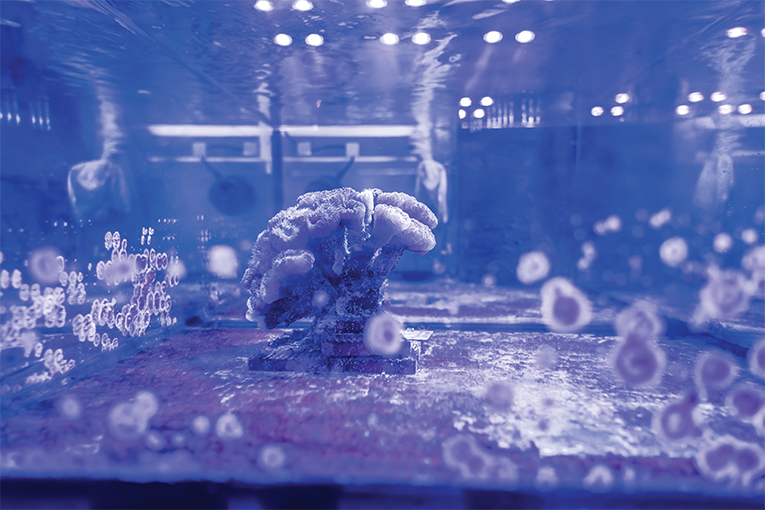 Taking a close-up view of a single coral in the Florida Coral Rescue Center. (ROBERTO GONZALEZ)

When one thinks of Mutual of Omaha’s “Wild Kingdom,” what comes to mind is sitting in front of the television in feety pajamas on an early Sunday evening. It was a weekly ritual, the perfect end to the weekend, as host Marlin Perkins calmly narrated scenes featuring everything from adorable bear cubs to menacing hammerhead sharks.

Mutual of Omaha’s “Wild Kingdom” ran from 1963 to 1988. For 25 years, the show’s host Marlin Perkins, later joined by Jim Fowler and Peter Gros, introduced audiences to many exotic locations worldwide, educating and entertaining their audience members with unforgettable scenes. Who could forget the episode covering the migration of African elephants, where a tranquilized elephant unexpectedly awoke, chasing the television crew into their Land Cruiser, fleeing the scene as the angry elephant pursued the crew? It was reality television at its finest.

“Wild Kingdom” is Back in Action

The legendary documentary was revived in 2002 on Animal Planet, running until 2011, and it is now back in action with a new television series. The mission is to showcase conservation success stories, inspiring the next generation of conservationists.

“We are excited to build on the conservation legacy of our original show,” says Jen Wulf, Vice President of Brand Strategy and Engagement at Mutual of Omaha. “Our storylines will focus on the good as we celebrate the great work by many caring, compassionate individuals and how they are making a positive impact on the ‘Wild Kingdom.’”
Peter Gros returns to host the new series and appears alongside featured guests from conservation organizations. Some of the endangered animals featured in the series include Florida panthers, cougars, bears, wolves, and coral. 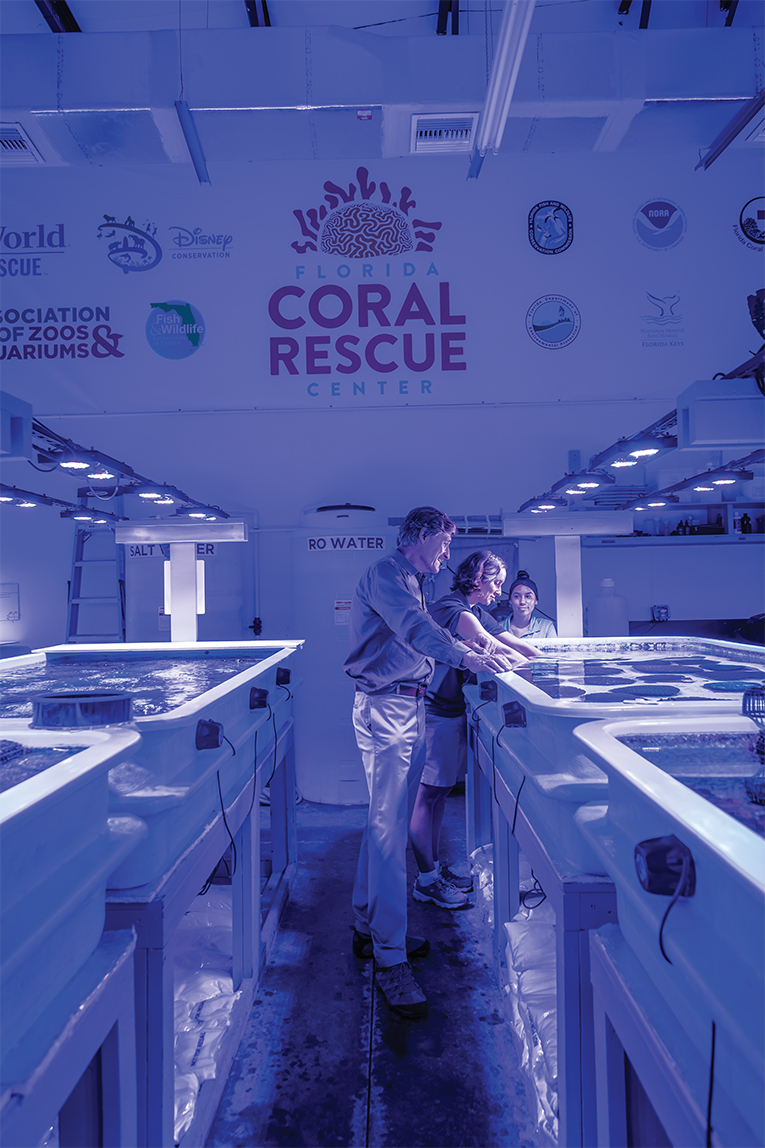 Inside the Florida Coral Rescue Center with Peter Gros and scientists. (ROBERTO GONZALEZ)

The largest coral reef facility in the country, in a warehouse in Central Florida

Orlando magazine caught up with the “Wild Kingdom” production team while filming in our backyard. The team was working on the episode “Lost Coral of Key West,” which airs on February 3.

When one thinks of coral reefs, one envisions the Florida Keys, snorkeling off the clear coastal waters of South Florida. This television shoot took place at the Florida Coral Rescue Center, located at a warehouse near Boggy Creek, nestled between a motor sales company and a dance studio. Never in a million years could one imagine the tanks of coral nurseries tucked inside this nondescript warehouse.

The moment you walk through the doors, you know you’re not in an ordinary warehouse or even a run-of-the-mill aquarium. The loud hum of the water tanks and ultraviolet lighting cast an otherworldly glow as the dedicated scientists conduct their studies. Several groups have collaborated on this critical project, including SeaWorld, Disney, the Florida Fish and Wildlife Conservation Commission, and the Fish and Wildlife Foundation of Florida.

Following a team of scientists at the Association of Zoos and Aquariums’ Florida Reef Tract Rescue Project, Peter Gros examined the effort to defy the odds to reproduce, rebuild and restore Florida’s reefs, one piece at a time. 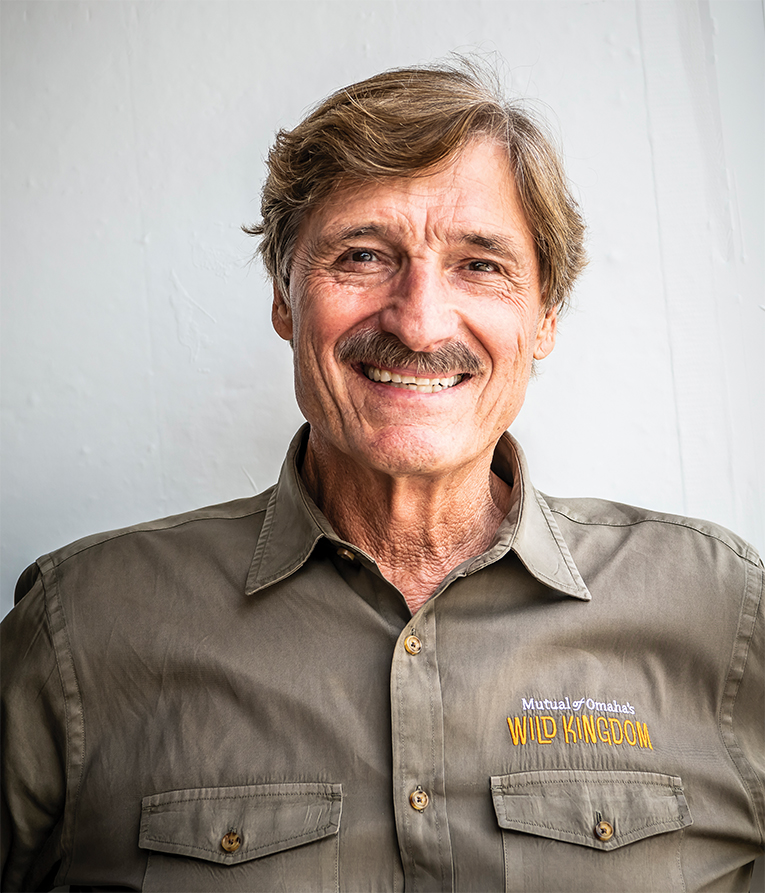 The timing for the project couldn’t have been more fortuitous. Just one week after the pandemic began, the Florida Coral Rescue Center moved into the location, which includes 18 aquariums, approximately 6,000 gallons of water, and a staff of four people working round the clock to care for and nurture 753 corals, all in various stages of development. This unassuming location is the largest facility in the country devoted to coral reefs.

The goal is simple; to keep the coral alive and to assist in its reproduction. The goal may be simple, but it comes with a hefty price tag, as coral are one of the more expensive animals to maintain and reproduce. It’s worth every penny.

While coral reefs lack the excitement of stalking prey, it couldn’t be timelier. Under the Endangered Species Act, 22 coral species are listed as threatened, and two are listed as endangered. The primary threats to coral reefs are climate change, pollution, and the effects of unsustainable fishing.

According to a study conducted by the United Nations, approximately one billion people depend on coral reefs for their food and livelihood. Coral reefs are responsible for essential food, shelter, and spawning grounds for fish and other marine organisms. If they do cease to exist, biodiversity would suffer from coral reef loss. Multiple food chain systems could be altered, and many vital species would soon disappear, which would be catastrophic, leaving hundreds of millions worldwide without their primary source of food and income.
The question looms large; Is it too late to save our coral reefs? Some say it could be too late, but Peter Gros has heard those words before and knows that we have faced tough challenges in the past, and we can do it again.

“We do have serious pollution issues affecting wildlife and their habitat,” explains Gros. “However, I’m hopeful when I look back at the Ohio River, which was so polluted in the late ‘60s that it would catch fire. Thanks to extensive conservation efforts and pollution controls, birds, fish, and other forms of wildlife have returned. The rivers also have seen a resurgence of people returning with kayaks, canoes, and other watercraft. In the beautiful Hudson Valley, the Hudson River has been drastically cleaned up as well.”
Experts agree that it’s not too late, and the vital work that the Florida Coral Rescue Center is doing could make a difference in the future of our oceans and the precious ecosystem.
“These are the kind of successes that give me hope,” says Gros. “We will continue to have problems, but I am convinced we will also continue to find solutions to these problems. We will find new and better ways to protect our wild lands and the animals that inhabit them.” 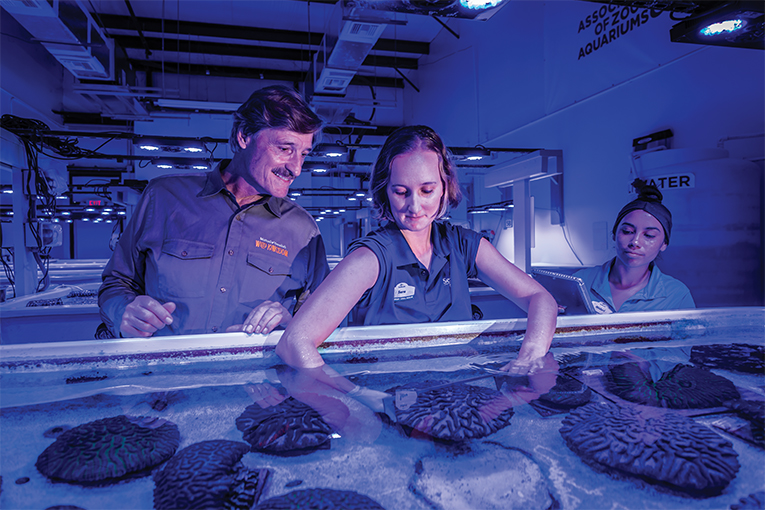 A New Season of Hope

It’s that kind of optimism that “Wild Kingdom” wants to share with its viewers, old and new, as it explores other topics like “Spirit of the Condor,” which airs January 13, or the fascinating “Nuclear Crocs of the Everglades” airing January 20.

From cougars, turtles, coral, and manatees, “Wild Kingdom” is back and better than ever. “Mutual of Omaha’s ‘Wild Kingdom’ has a long legacy of educating people about animals, habitats, and conservation,” Gros explains. “This series shows that it’s not all doom and gloom in the wild and that many species of once-endangered animals are coming back. We hope to reach a new generation who will commit to preserving our natural world.”

“Wild Kingdom” offers educational programming as timely, if not more so, today than when it debuted in 1963. According to the United Nations, human-induced climate change is the most significant, pervasive threat to the natural environment and societies the world has ever experienced, with the poorest countries paying the heaviest price.
Let’s hope that new generations of children in their feety pajamas will sit in front of their television sets this January, watching entertaining and informative shows like “Sea Otter Sanctuary.” Peter Gros is thrilled to be front and center, educating the next generation.

“I am honored to host our new series, Mutual of Omaha’s ‘Wild Kingdom Protecting the Wild.’ For 60 years, Mutual of Omaha has been educating our viewers about the plight of our endangered and threatened species and their habitats worldwide. The classic series affected the attitudes of millions of people, many of whom became interested in conservation as they learned about the world’s wildlife—and in some cases, even made it their careers. I think our new show will create hope for this generation. Our ten episodes focus on conservation success stories of species that were once in great danger of becoming extinct and are now making a comeback in the wild. My wish is that this series will inspire our viewers, as it did me, to commit to take action to participate in the protection and preservation of our natural world.”

This article appears in the January 2023 issue of Orlando Magazine.
Categories: Art & Entertainment
Tags: Central Florida, conservation, Florida, marine life, Mutual of Omaha, Orlando
Want to read the whole issue? Download and read this issue and others on Magzter.