From posh restaurants to drive-in favorites, these spots marking decades of goodness are cause to celebrate.

This August marks the 15th anniversary of Chef Norman Van Aken’s eponymous Norman’s at the Ritz Carlton Orlando, Grande Lakes. I asked the doyen of Modern Florida Cuisine how it felt to have a teenage restaurant (Does it get surly and slam its door? Does it spend all its time gossiping on the phone with Momofuku?), and he told me, “Your life perspective is as if restaurants aged and correspondingly matured in human terms… but like the famous ‘dog years,’ restaurants operate on another metric. In reality …  more closely to dog years. Once a restaurant is 15 years old it is more like nearly 100, especially in the life cycle of modern American businesses! I must admit …. to reach this august age is a bit of a mind boggler. But we are happy to reach it, and still have all of our teeth… canines included.”

After the all-star lineup of the 10th birthday bash (chefs in the kitchen included Jeremiah Tower, Emeril Lagasse, Dean Fearing, local stars Scott Hunnel, Brandon McGlamery, James and Julie Petrakis and Tim Keating), I can’t wait to see who will show up to cook this year.

The announcement of the celebration got me thinking about our other veteran eateries. 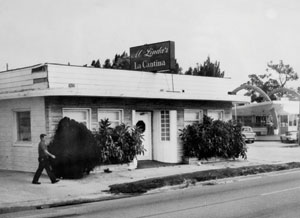 For a place that seems to be in a state of constant change, Orlando has some beloved and long-lived restaurants. Watchmaker Rudy Seng opened what became Linda’s La Cantina steakhouse in 1947 (the La Cantina photo at left was taken in the 1970s). The legendary oyster bar, Lee & Rick’s, is fast approaching its 70th birthday, having opened on the front porch of Rick Richter’s Old Winter Garden Road home in 1950. And the epitome of dive bars, Wally's on Mills, began life in 1954 when Roy Updike and his son, Walter (“Wally”) opened Orange Liquors No. 2 (the famed naked lady wallpaper was pasted up in 1961). Bastion of French cuisine, Le Coq au Vin, opened in 1976. Enzo Perlini’s old school Italian eatery, Enzo’s on the Lake, began its long life on the shores of Longwood's Lake Fairy in 1980.

* 70: Goff's Drive In on OBT, a soft-serve ice cream tradition started in 1948 by Ed Goff, when Orange Blossom Trail was the main tourist thoroughfare through Orlando.

* 60: Paul Gabriel opened Gabriel's Submarine Sandwich Shop in 1958 on the corner of Edgewater Drive and Dartmouth Street. It moved to its current location near Edgewater High in 1978 (another birthday) and is still run by the Gabriel family.

* 50: Jimmy Fallon’s favorite Orlando sammich shop, Beefy King, now in it’s third generation of family owners, began in 1968 when Freeman and Margaret Smith thought a roast beef sandwich would be a great customer draw. And they were right.

What are your long-lived faves? Send me a note. Stay in touch at joseph.hayes@orlandomagazine.com and access a comprehensive list of my print and online reviews here!