Eatonville: The Town That Freedom Built 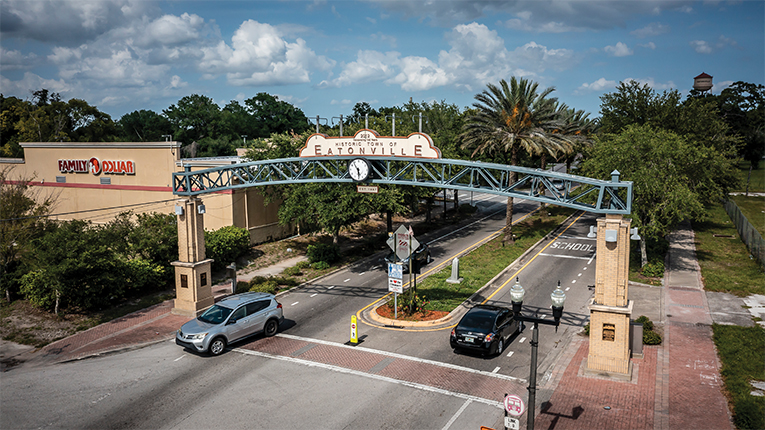 The iconic sign, “The Town That Freedom Built.” (ROBERTO GONZALEZ)

Tucked between Maitland and Winter Park, just 5.28 miles to the north of Orlando, lies the town of Eatonville, the oldest incorporated African American municipality in America.

Established in 1887, Eatonville is a town of particular significance. It was the first town successfully established by African American freedmen and made famous as the home of Zora Neale Hurston, the Harlem Renaissance writer known for her novel, “Their Eyes Were Watching God.”

They named Eatonville in honor of Josiah Eaton. At the first mayoral election, the new citizens voted for Columbus H. Boger as the first mayor to lead the town staffed by an entirely black governmental staff.

The newly elected Mayor Angie Gardner is not the first woman mayor of Eatonville, but with her visionary leadership and solid commitment to its people and history, she is poised to lead the town into the future.

Mayor Gardner has a rich background, ideally suited for a mayoral office. Gardner attended Rollins College in Winter Park, earning a BA in Economics, a Minor in Business, and an M. Ed. In Education and now works as a full-time second-grade teacher. This unique blend of skills is serving her well as she assumes the role.

“One thing I found out coming into the office is that many of our fees are outdated,” says Gardner. “We need to bring our town, its processes, and all ordinances up to 2024 standards because we need to look ahead.” 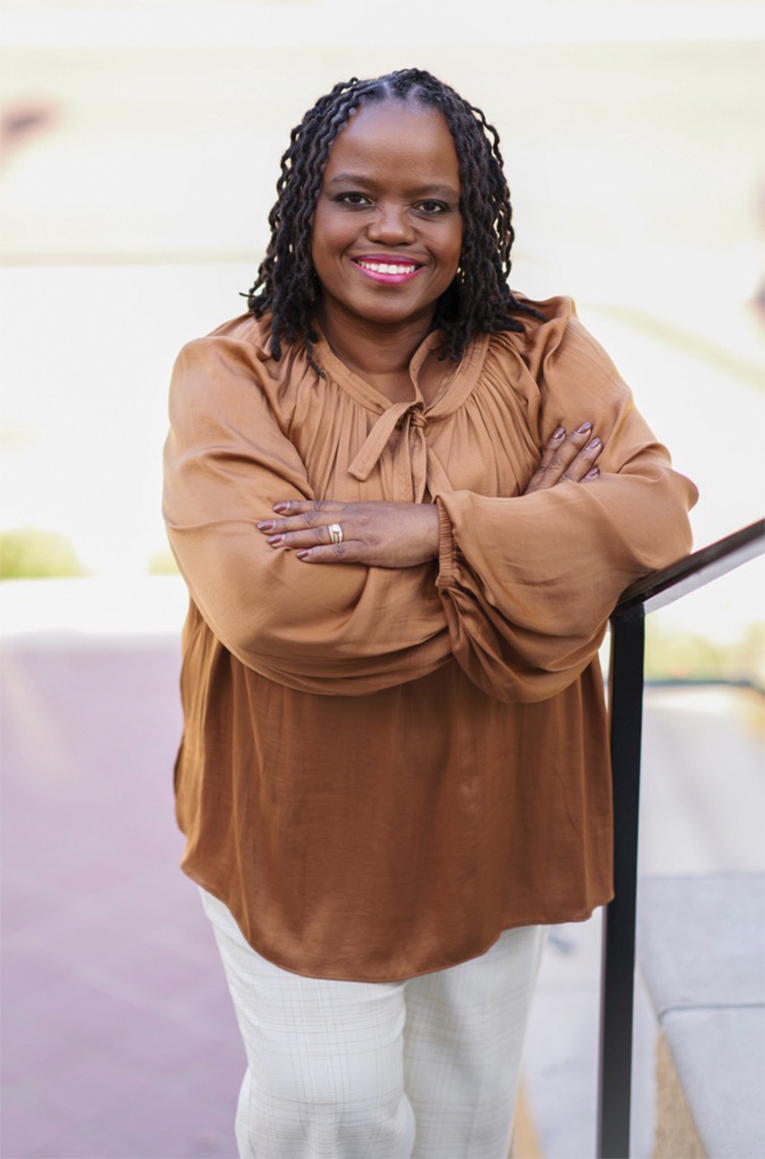 If you’ve ever read the literary classic “Their Eyes Were Watching God” by Zora Neale Hurston, you could get a glimpse into what life was like in rural Central Florida in the early twentieth century.

As Hurston’s hometown, Eatonville played an integral role in her writings and work as the first Black female anthropologist with the Works Progress Administration (WPA) established in 1935. Hurston dedicated herself to documenting folklore and folk songs, arranging a session at the Clara White Mission featuring African Americans telling stories and singing or chanting traditional music for preservation.
Each year Eatonville holds a festival in her honor appropriately named “ZORA! Festival,” a month-long, multi-disciplinary, intergenerational event composed of public talks, conferences, movie screenings, and arts education programming.

Perched in a prime location, Maitland borders Eatonville to the north and east and the south by Winter Park; it’s a melting pot of contemporary culture with a touch of Old Florida. Eatonville lies between Lake Sabella to the north and Lake Bell to the south and is primarily a residential community with a few barbershops, restaurants, churches, government buildings, parks, and schools. When you drive through the main streets, one finds planted palm trees, brick-lined streets, and modern municipal buildings coupled with quaint century-old wood-framed homes.

Mayor Gardner dedicates herself to maintaining the quaint, home-like feel of the town and has committed herself to make sure Eatonville is a lovely place for visitors and residents. “When visitors come to town, I want them to see a town with pristine landscaping.” 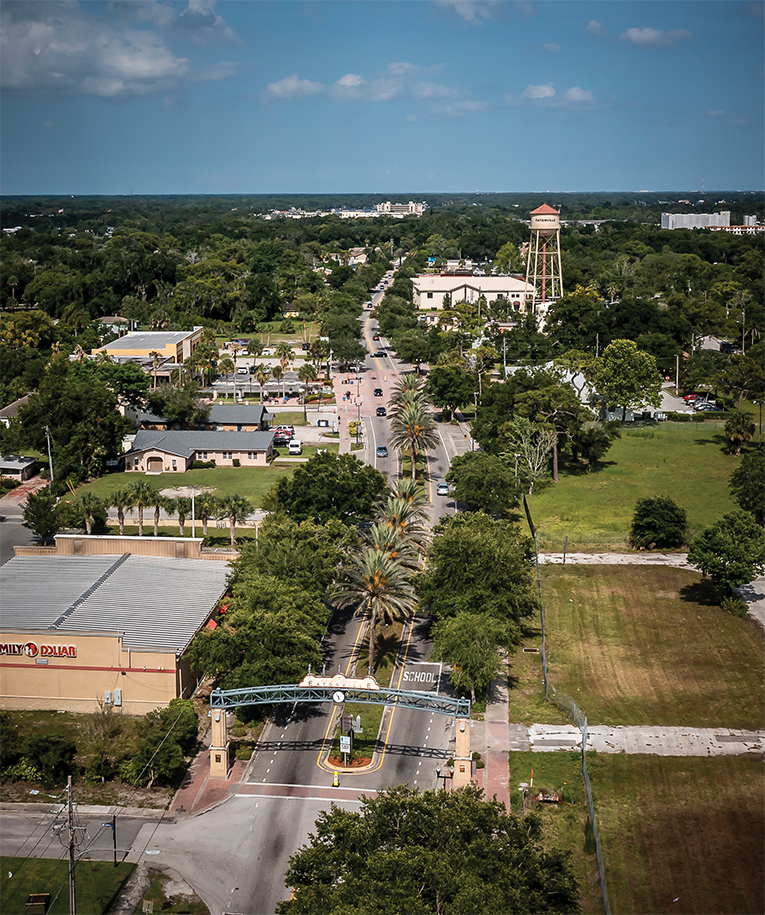 An aerial view of Eatonville, “The Town that Freedom Built.” (ROBERTO GONZALEZ)

Angie Gardner is a second-generation Central Floridian, educator, wife, and mother of two. As the youngest of six, she was raised not in Eatonville, but just a few miles down the road on the west side of Winter Park, an area once known as “Winterville.”

The leveling and gentrification of Winterville is an emotional topic for Mayor Gardner, as she saw her childhood home being wiped away by development.

“Just a while ago, when I was driving through my old neighborhood, I saw a little African American child walking, and I realized how the tables have turned. I know some African American children are still on the west side, but you don’t see them nearly as often as I did growing up. It hit home at how much that change has affected the families and my history on the west side.”

Mayor Gardner has precious memories of growing up in Winterville. “My earliest memories were from our home on Morse Blvd. We had a house next to an enormous lot with a garden. I remember running through that little garden path.” 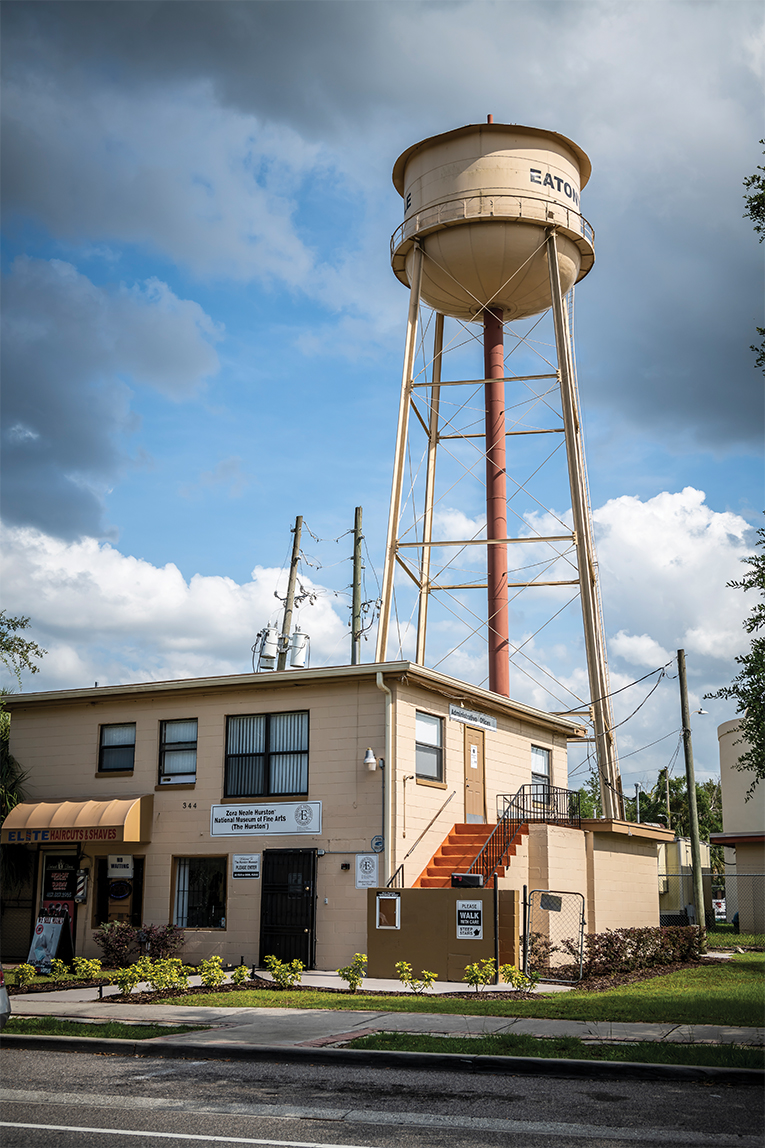 That was the same garden where her father taught her to drive a car. “There was a funeral home on the corner, and I remember the hearse driving by as we played stickball in the street or football in the empty lot. We had little money, but we didn’t want for anything either.”
This experience of the gentrification and loss of Winterville informs Mayor Gardner’s current views on development. “First, development needs to help those already living here.”

That’s not to say that Gardner doesn’t welcome development and those wishing to move to Eatonville. “We welcome them and developers, but we want the right development for the right reason at the right time. We want responsible growth that honors the history and the community.”

Juggling two full-time jobs is a daunting task for any person. As a full-time second-grade teacher and mayor, Gardner isn’t fazed. “I love learning, and this is a learning curve for me. I have to shave that curve as quickly as I can, but I truly enjoy it and what the outcome will be for the people.”

Mayor Gardner is optimistically embracing this new journey. “It has been an adventure for me. If I do nothing else in my career, this one job, besides teaching, is the most rewarding thing I’ll ever achieve.”

“Eatonville is, and has always been, a beautiful town. I love living here and it’s a beautiful place to raise your family for anyone considering moving here. Even though I didn’t grow up here, I have lived here longer than in Winter Park, so I am proud to be an Eatonvillian.”

This article appears in the July 2022 issue of Orlando Magazine.
Categories: Highlights
Tags: Eatonville, Florida, history, Orlando
Want to read the whole issue? Download and read this issue and others on Magzter.

Focus On with Dr. Ahmed Sadek: I Have Epilepsy, Can I Drive?