Ensconced in the Edgewater Heights area of College Park, interior designer Grant Gribble and Jack Hanson, owner of The Melrose Corporation, live amid surroundings of self-expression. It is the guiding force of the décor in their home and their shop—expression of the colorful kind.

“People actually ask me if I dream in color, and that’s a fair question, because everything I do design-wise is influenced by my love for color. You step into my house or any house I’ve designed, and that resonates immediately,” says Gribble.

Collage Home, the couple’s home décor and lifestyle shop on Edgewater Drive, is an entry point into Gribble’s imagination, offering locals the opportunity to rethink their interiors, whether or not Gribble is their designer. The shop’s tagline? It’s the mix, not the match.

“The store is a collage, much like my home, and we fit things together that you might not believe will work until you see it. So the store shows people another way of thinking about rooms—it isn’t just a place to buy things,” he says. 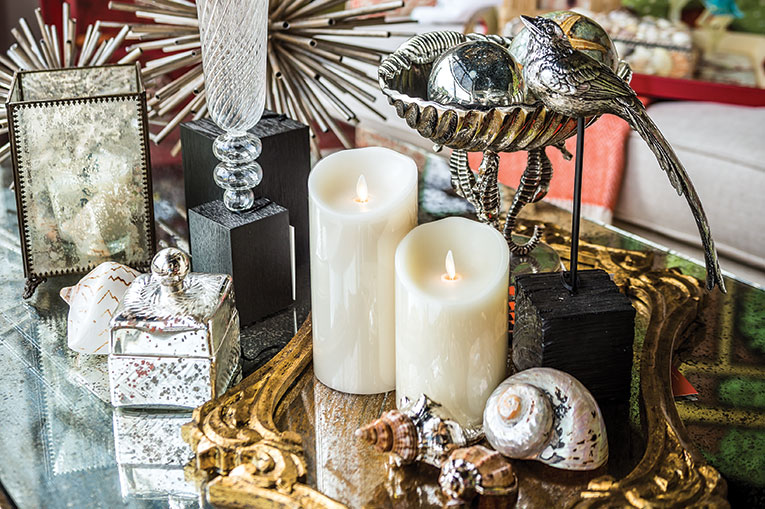 A curated collection at Collage Home, the Edgewater Avenue shop.

Adjacent to the shop is Gribble’s design headquarters. The firm, Gribble Interior Group, was founded by his mother, Alice Gribble, who still has an active role. In 2012, Gribble and Hanson bought the building and the company, with Hanson directing business development. While they are growing in new directions, they continue to draw inspiration from the foundation Alice built. And when sitting and talking with mother and son, it’s apparent where Grant inherited his passion for interiors and his wonderful way with clients.

Moving forward, Gribble Interior Group plans to put more emphasis on commercial and hospitality work.“People want their offices to have more of a residential feel instead of being cold and stark, so who better to design these spaces than someone who has such a long history of residential design?” asks Hanson. With the addition of Collage Home and the expanded range of commercial services, Gribble Interior Group will continue to satisfy adventurous design palates in Central Florida and beyond.

The nature of these design adventures is perfectly portrayed by Gribble and Hanson’s house. From the outside, the pink Spanish manse is demure, tidy, even traditional. Shaped hedges and topiary, neatly planted blooms and conventional Florida trees like magnolia and palm compose the landscape. But inside, a cacophony of color awaits. Every surface and object sings out like a glorious choir demanding to be heard. 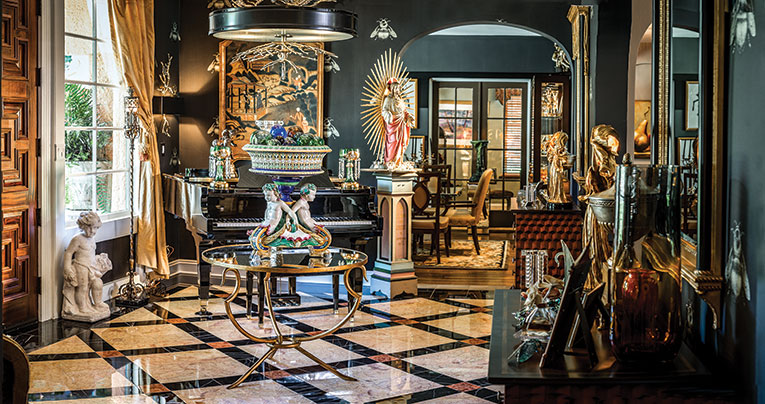 From the home’s facade to the foyer and bedrooms, Gribble mixes color, patterns and prints.

In the foyer, Gribble begins his tour, like he has many times before. He points out the ceiling fixture with matching sconces, while he and Hanson tell the story of how they found the lighting fixtures on a buying trip in Atlanta. “We were sitting in the showroom, and I looked up above the table where we were, and said, ‘That chandelier would look amazing in our foyer,’ ” says Hanson.

Then there’s the large majolica compote bowl, one of Hanson’s favorites; the grand piano; the distinctive wall coverings—they all come with stories. The couple is especially fond of the table lamps on either side of the entryway to the rest of the house. Original Agathon Leonard gilt pieces from the turn of the century, the lamps are Art Nouveau “Scarf Dancers,” fashioned after the American theatrical dancer Loïe Fuller. The original sculpture was displayed at the 1900 World’s Fair in Paris.

Wherever your eye falls in the house, there’s an object, print or material with a history of its own. Pulling these stories together to form one grand symphony is the magic of Gribble’s design work. 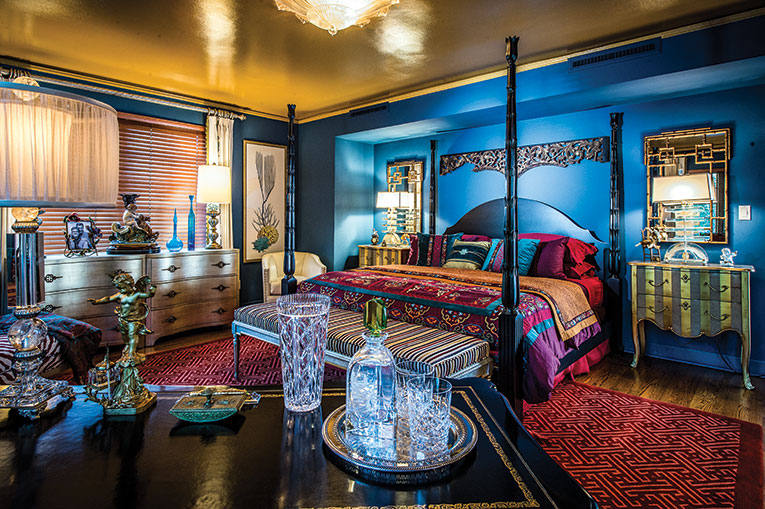 “When we had the open house for the Home Builder’s Association, and we were on the Parade of Homes, I was standing at the door, and Grant was doing what Grant does, give the tours, which he loves to do,” says Hanson. “What people have said over and over again is that you walk into a room, and you would just never imagine that the next room could feel like it matched with the last room, because they’re all so different. Yet somehow, it all goes together, and makes you feel like you’re at home.”

In the neighborhood, their house is known as the Reynolds home. William Reynolds, a previous owner, while not the original owner of the house, was the brother of R. J. Reynolds, the tobacco magnate. William was the most prestigious of all the homeowners, so the house bears his name.

Before buying the Reynolds home, Gribble and Hanson lived across the street. But they knew they wanted the house and waited for it to come on the market. Eventually, they became the lucky new owners, “but we couldn’t move in for a year because so much work had to be done,” says Gribble.

Fifteen years later, they couldn’t be more settled in. Every room is a small universe, designed to the hilt with no surface left untouched.

Gribble approached each room deliberately and considered its function, the pieces he and Hanson already had or were eager to bring in, the endless catalog of color and textile swatches collecting in his brain, and the emotions he wanted each space to elicit. And the rooms have morphed through the years to accommodate new acquisitions and ideas.

When Gribble or Hanson discover a piece they can’t live without on one of their buying trips, they may have to rethink a room’s décor to accommodate it, or just switch out a few items. Everything’s in play; the house has become the designer’s laboratory. 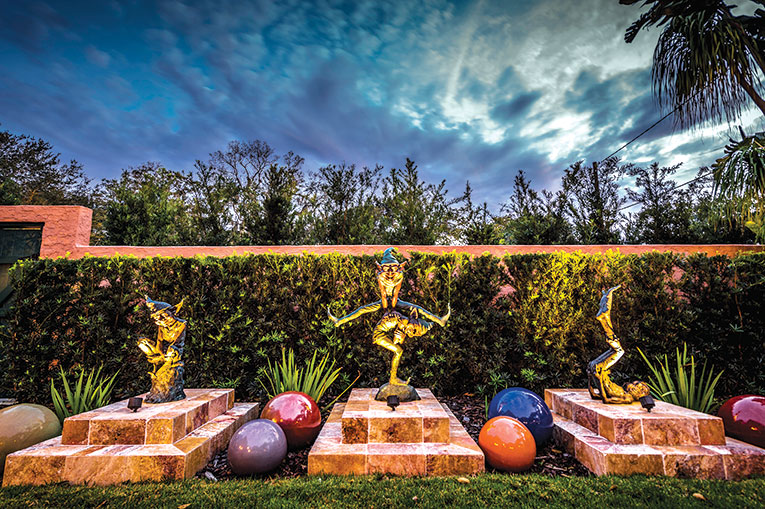 The backyard features a Mediterranean-style fountain, a swimming pool, and fanciful elf sculptures.

The same can be said for Collage Home. Because Gribble is in New York every month to shop for clients—as well as in Atlanta, High Point, N.C., and furniture shows around the country—his exposure to furnishings and décor is extensive. Much of what he sees may not fit his clients’ projects, but he knows that the pieces will likely find a home if he buys them. Some of these pieces go straight to his house, but many land at the shop. There, they are staged in vignettes that continually rotate and refresh, suggestive of a designerly lifestyle. Spending time with Gribble and exploring the places he creates, it’s hard to resist reimagining your own home as a better, more interesting version of itself.