Cursive: Don't Write it Off

Learning the old-school style of putting pen to paper still has an important place in our digital world.

Kelly Dill’s second-grade students are firing on all cylinders and ready to shift into overdrive. Each is equipped with a “learner’s permit” and the enthusiasm of a 15-year-old brandishing car keys for the first time. The boys and girls in Dill’s first-period English class at Park Maitland School are eager to put pencil to paper and begin their first cursive-alphabet lesson.

“We’re going to start out learning the under-curve,” Dill explains, as her marker sweeps upward on the classroom white board to form the first stroke of the cursive letter “i.” “We don’t go straight up like the Tower of Terror!” she warns. And please, no “circus tents” or “teepees” when stroking down to complete the third vowel in the cursive repertoire.

Every year, Dill says, second-graders can’t wait to tackle cursive writing skills, partly because of the perks involved. Students receive a paper “Cursive Learner’s Permit” upon which they draw and color their own self-portraits. Each permit promises that Dill believes each of them will become a cursive “superstar.’’ By third grade, when students have mastered cursive writing, they’re presented with a laminated “cursive license,” similar to a driver’s license, photo mugshot and all.

“The first question they ask in August is when can they start cursive,” Dill says. “It’s a means of communication that we’ve been using for as long as people have been writing, and it’s the way for us to get our thoughts on paper . . . as well as a way for us to read what other people, including those of past generations, have written.”

Whether cursive writing remains relevant in the digital age of keyboarding has been the subject of great debate over the past decade. Teachers like Dill aren’t the only ones who believe cursive handwriting fosters students’ creativity and leads to smarter writing throughout their lives.

Multiple research studies in the United States and abroad have shown important links between handwriting and overall educational development. One study by a University of Washington psychologist revealed that printing, cursive writing, and typing on a keyboard are all associated with “distinct and separate brain patterns—and each results in a distinct end product,” according to a 2014 New York Times “Science” article. When children in the five-year study composed text by hand, they consistently produced more words more quickly than they did on a keyboard and expressed more ideas.

Neuroscientist William R. Klemm of Texas A&M University, who blogs for Psychology Today, says that learning penmanship is developmentally beneficial for a young brain. It “provides crucial benefit to children at an age when they need it most: a sense of involvement and ownership, hand-eye coordination, patience, and self-control,” he wrote.

In Florida, cursive writing instruction in public elementary schools is a curriculum requirement for third through fifth grades as part of the Language Arts Florida Standards approved in 2014 by the Florida State Board of Education. Cursive writing was not included in Common Core State Standards (CCSS) that Florida adopted in 2011 along with 44 other states. But after a series of workshops for citizen input into the standards, Florida added the cursive mandate, along with other curriculum changes, to create the Florida Standards. 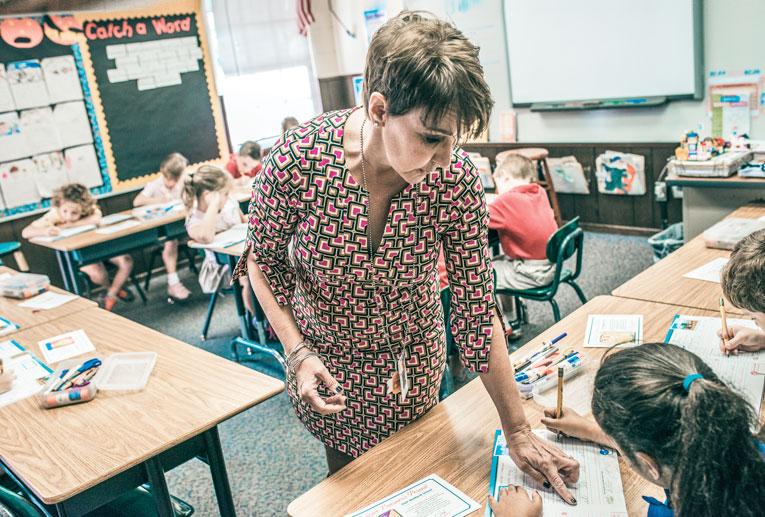 Kelly Dill instructs her second-graders in cursive writing at Park Maitland School. Each is working toward earning a “cursive license.’’

Sandy Stenoff, co-founder of The Opt Out Florida Network, a statewide organization of parents, students and teachers who advocate for “multiple measures of authentic assessments” in public schools, is pro-cursive for a number of reasons. The mother of two children in Seminole County schools and one at New College of Florida believes that, “as more and more kids lack cursive skills, those with the skill will have an advantage, however slight.

“I don’t think of it as a lost art, like Latin or hieroglyphics,” Stenoff says. “It’s important that kids are able to read their grandmothers’ handwritten letters to them,” as well as historic documents and even teachers’ comments on their papers.

Like daughter, like mother. “When I have to do heavier-thinking kind of writing, I like to get out a yellow pad and write my thoughts down,” Stenoff says. “It’s a different process than sitting in front of the computer. I brainstorm better in handwriting; different ideas come to me much easier when I’m doing longhand.”

Despite documented benefits of learning how to write longhand, many in this digital age believe the skill is overrated.

Last September, a Facebook post went viral about a teacher who reprimanded a 7-year-old for signing her name in cursive style. The teacher returned the student’s worksheet, signed by “Alyssa,” with a red-inked note that said, “Stop writing your name in cursive. You have had several warnings.”

More than 400,000 people shared the post on Facebook, adding snide comments about the teacher or confirming their own commitment to teach their children how to write using the cursive alphabet.

Though pro-cursive debaters can be passionate, Mark Hall, director of the University Writing Center at the University of Central Florida, says the cursive vs. keyboard topic distracts from more important issues related to literacy learning.

““It’s a silly debate,” says Hall, who is in his fifth year directing the peer-run writing center. “It doesn’t matter in what form people write. What matters is that students in school have many, many opportunities to write, and the problem with public schooling today is that students don’t have those opportunities.

“Whether they’re keyboarding or writing in print or in cursive makes no difference. What they need is experience writing, because what we know from mountains of research is that writing is a powerful way to learn across the [core] disciplines.”

UCF senior and computer science major Paul Hamilton agrees that the style of a student’s writing is unimportant.

“Most Millennials consider cursive handwriting a novelty at this point, unless they use it for signatures,” Hamilton says. “Based on my own experience and the amount of time it took to learn cursive, it didn’t really pay off,” Hamilton says. “I preferred to print, and most of my classmates did. It was a rarity that students decided to switch from print to cursive. The only time I use it is when I’m signing my name.”

Hamilton, however, does feel there’s some benefit to learning cursive: “Most of the value that students are going to retain from learning to write cursive is how to read it,” he says.

Without being able to read cursive handwriting, Hamilton says he wouldn’t have been able to decipher instructions or notes written by professors or co-workers.

“The bigger issue in terms of students’ functionality is that they can’t read cursive, including on primary documents. They can’t read signatures on the Declaration of Independence. And I know lots of kids who can’t sign their own name in cursive,” Friedman says.

Even so, she feels conflicted about the cursive debate. “Today, more and more kids are enabled by the keyboard,” she says. When students write in cursive, “the hand often doesn’t keep up with the brain.” 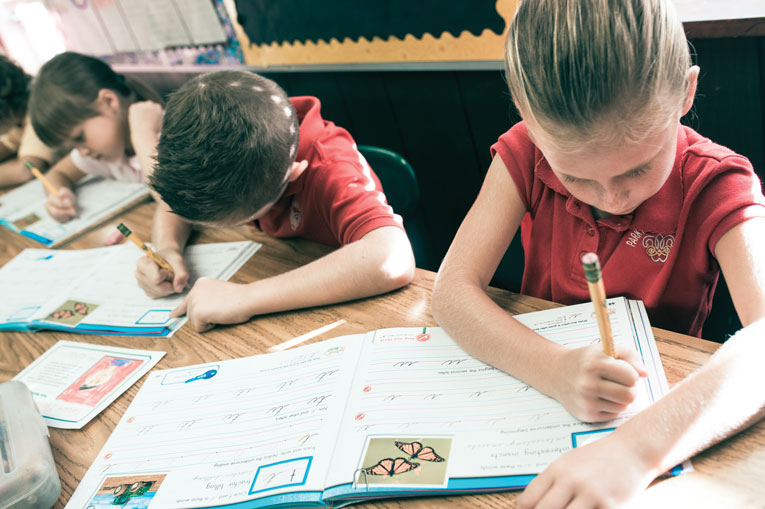 Students in Kelly Dill’s class practice writing the letter “i’’ in cursive, working to avoid a “circus tent’’ or “teepee’’ look in forming the vowel.

A Blended World of Cursive and Keyboard

Pam Allyn, an international literacy advocate, author and spokeswoman for the national BIC’s Fight for Your Write mission, debuted a program to save handwriting at the 2015 National Education Association annual conference in Orlando. Her BIC Teacher Leader program, sponsored by the manufacturer of writing implements, offers ideas for incorporating writing into teachers’ curricula.

Though the emphasis on teaching cursive writing in many schools had waned by the turn of the century as keyboarding instruction took over, Allyn is excited about the revival of handwriting instruction in Florida and many other states.

“Now, I feel teachers’ renewed excitement all across the country,” says Allyn, who is also founder of the global LitWorld and the national LitLife, which advocate for children’s literacy rights. “For a while, there was a sense that technology would solve everything — give a kid a tablet, and he would become literate. But we are living in a blended world; as adults, we use both pen and the tablet. And I think the tide is starting to swing back to a more holistic approach where we can see the power of the pen and the power of the tablet. It’s not one or the other.”

But one, she says, is more personal than the other.

“Each person is so uniquely revealed through handwriting, and children understand that,” she says. “These days, with families on mobile devices 24/7, writing by hand really gets the children to think about what they’re writing.”

Krizia Columna, a second-grade teacher at Shingle Creek Elementary School in Orange County, attended one of Allyn’s workshops last June and will be preparing her students for their third-grade dive into cursive instruction.

“I was raised in the Dominican Republic where all writing, beginning as early as kindergarten, is cursive,” Columna says. “By the end of this year, in my class, the students will start learning what the letters look like. Cursive writing helps them develop their fine motor skills, and they concentrate more on what they want to say.”

Kelly Dill’s second-grade Park Maitland students have plenty to say after their first cursive-writing lesson. “It was a little tricky,” says Carolyn Ahl, 7.

“I thought cursive was fun, and everybody’s cursive is different,” says Aidan Burkhart, 7.

Tricky, quick, and fun. A little bit like driving a car for the first time. The kids are jazzed and ready. Next year, they’ll have a license to write.