Capturing the Pro Bowl, a college basketball tourney, a national tennis center and more, Orlando is primed for a big year in sports.

According to the Chinese Zodiac, 2017 is the Year of the Rooster. Certainly in one area, Orlando has plenty to crow about.

Call it The Year of Sports in The City Beautiful. From landing the NFL Pro Bowl and two opening rounds of the men’s college basketball championship to the debut of a new soccer stadium and the opening of the new national headquarters for U.S. tennis, the stars have truly aligned for Central Florida.

Key to the sports explosion was the 2014 refurbishment of the Citrus Bowl, now known as Camping World Stadium. That $207 million overhaul got the attention of the NFL, which awarded the Pro Bowl to Orlando, moving the star-studded event from Hawaii, where it has been played for all but two games since 1980. The stadium also hosted last fall’s season-opening game between Florida State and Ole Miss, as well as an NFL preseason matchup between the Atlanta Falcons and Miami Dolphins. 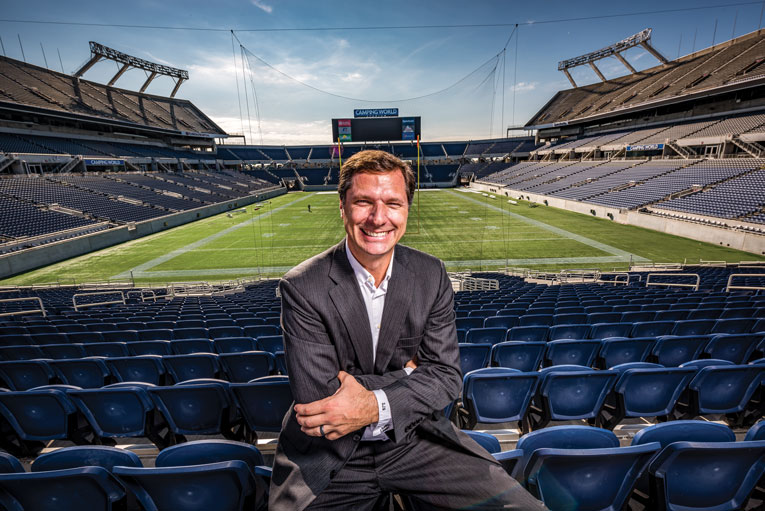 Also critical to Orlando’s success, say tourism officials, is that the area always has been able to step up with world-class venues and a multitude of hotel rooms to handle visitors on short notice. It did so when the Atlantic Coast Conference decided in September to move its football championship game out of North Carolina because of the state’s controversial trangender restroom law. Waiting to snap up the game: Orlando and Camping World Stadium, where the contest between Clemson and Virginia Tech was played in early December.

As Orlando Mayor Buddy Dyer notes: “When you bring in 66 million visitors a year, you have the experience to handle big events.”

With the event calendar swelling for 2017, fans can rejoice. WrestleMania 33 will feature a week of events throughout Orlando, including a free fan festival at the convention center, culminating with the April 2 main event at “the campground,” the nickname for Camping World Stadium. Residents will also have a chance to see some of the world’s top soccer clubs play as part of the International Champions Cup, which recently announced its marketing partnership with Visit Orlando for the worldwide summer soccer tournament that secures a premiere match to be played in Orlando in both 2017 and 2018.

Sweetening the pot, the ribbon-cutting at both the new soccer stadium in downtown Orlando and the 100-court United States Tennis Association’s national campus at Lake Nona add hundreds of sports events. Even  non sports enthusiasts can’t help but notice that the world’s best athletes and the fans who adore them are showing up in our backyard.

Add to all this the NBA’s Orlando Magic and hockey’s Solar Bears and there’s no shortage of action for ravenous sports fans:

When the NFL announced Orlando as home of the 2017 Pro Bowl, scheduled for Jan. 29, it also unveiled its new mission to use Pro Bowl week to celebrate football at every level. Fans may not have scored a ticket to the big game but they could still enjoy free, family-friendly programming throughout the city, including a four-day Fan Festival at ESPN Wide World of Sports at Walt Disney World. The NFL expected nearly a million people to participate in Pro Bowl events in Orlando.

At ESPN, top youth and high school football, flag-football and wheelchair football teams played championship games moved from other parts of the calendar and country. They also were showcased during a youth media day. Meanwhile, access was provided for those young players, as well as fans, to watch their heroes up close at AFC and NFC team practice, autograph signings, Q&As, and at the Skills Showdown, where players could showcase their incredible athleticism during an epic game of dodge ball, a relay race and other challenges.

The Pro Bowl returns to Orlando in 2018, with an option for 2019, says Steve Hogan, chief executive of Florida Citrus Sports. Hogan, who along with Mayor Dyer was instrumental in clinching the pro-football showcase for Orlando, is hopeful that the city—with its reconstructed stadium, great weather, world-class attractions, hotels, restaurants, shopping and nearby beaches—will become the permanent home of the NFL tradition that dates back to 1936. Already the stadium is home to three college bowl games at year’s end.

Orlando will once again be one of 13 cities to host two of the opening rounds of the NCAA Men’s Basketball Championship this spring. The games, to be played at the Amway Center, are set for March 16-18.

March Madness actually begins on March 12, Selection Sunday 2017, when the NCAA Division I Men’s Basketball Committee reveals which 68 teams have made the field, with the games beginning the following weekend.

Which teams will play in Orlando is anyone’s guess at this point. In 2014, the last time the city hosted the first two rounds, the Florida Gators and Louisville Cardinals emerged from the Orlando group of 8 to advance to the Sweet 16. For ticket information, go to ncaa.com

A rendering of the 25,500-seat soccer venue (ROBERTO GONZALEZ).

Such is the enthusiasm for Orlando City Soccer Club’s 2017 season in its brand-new 25,500-seat downtown stadium that individual season tickets are sold out. The privately funded stadium, just two blocks from the Amway Center and walking distance to the downtown nightlife district, will also be home to the Orlando Pride, the National Women’s Soccer League team, and Orlando City B, a member of the United Soccer League. Meanwhile, the developer Tavistock is working to complete Orlando City’s state-of-the-art training center at Lake Nona in time for the 2018 season.

For fans whose thirst for pro soccer can’t be quenched, a tall drink of water is on its way via a premium match between two marquee clubs (possibilities include Real Madrid, Manchester United and Bayern Munich) to play at Camping World Stadium this summer as part of the International Champions Cup summer tournament.

It’s no accident that Orlando has been added to the schedule. Announced in December, Visit Orlando and Relevent Sports, the company that produces the ICC, have entered a multi-year partnership that makes Visit Orlando the exclusive “U.S. Tourism Partner.’’ That means Orlando will receive significant exposure as the tour reaches some 800,000 attendees globally, with games also played in Europe and possibly South America and a TV audience of 70 million from games broadcast on ESPN in the United States. The city will host a match both this year and next. “Orlando is the top tourist destination in the United States, and the ICC is the premium [soccer] competition in the country, so we are preparing for a world-class match with an incredible atmosphere,” says Charlie Stillitano, chairman of Relevent Sports.

Want to beat all those tourists to snag some tickets? Add your email address at signup.internationalchampionscup.com to learn the full lineup of teams, venues and dates and to get early access to tickets.

Another significant development in Orlando’s sports landscape is the United States Tennis Association’s new national campus that opened January 2 at Lake Nona. The 100-court campus (yes, 100 courts—all of them lighted) on 65 acres makes it the largest tennis facility in the world and the only one in the U.S. with true European hard courts where pros can train for the French Open.

And the “If you build it, they will come” adage seems to be at work here: Both the USTA Florida chapter, previously headquartered in Daytona Beach, and the USPTA (professional tennis association), previously based in Houston, have built new headquarters offices, relocated their employees and set up shop adjacent to the USTA National Campus.

UCF is on board too, making the facility its home court as well as becoming an educational partner in a new hands-on degree program in Professional Tennis Management. The first class began in the fall of 2016 and every student will graduate having interned at the USTA National Campus.

It may be of most interest to locals, though, that the facility is open to the public. Anyone who wants to play, take a lesson, join a league, or simply watch the up-and-coming players work their way up to the pro tour is welcome. No membership required.

Conrad Cowan, director of tennis at the Interlachen Country Club in Winter Park is excited to see how the facility will help grow the sport. “Tennis is fun, it’s easy, you can find a place to play and it doesn’t take a lot of time. It’s the perfect sport, and you have all these doors opened up to you now with the USTA campus.”

Already, 100 events are scheduled for 2017, each lasting 2-3 days and attracting 55,000 players. Want to be among the first to visit this game-changing tennis facility? The Men’s Pro Circuit Futures feature matches from February 9-19 and February 23-March 5. College MatchDay programming on February 3 and 18 feature women’s teams from Stanford and UNC and pre-game activities including food and kids clinics beginning two hours before the first serve. February 22-24 is the Pro Circuit Gay Lesbian Tennis Alliance World Tour Championship. Learn more at usta.com/nationalcampus

Mayor Dyer says the USTA facility will undoubtedly make Orlando the center of U.S. tennis. But it and all the other stellar events are just the beginning, he says.

“I think we are just launching. The campground is in its second season, the Amway Center is six years old, the soccer stadium and the tennis campus are new this year. We have ESPN’s Wide World of Sports and the Convention Center. Now, there’s not an event that we can’t host. We have the premiere destination in the world and the facilities to match the destination.”