Here are some Orlando-area favorites that have kept the hometown burger fires burning, some for decades.

The Whiskey
Those with small hands might want to consider eating the burgers here with a knife and fork. Offerings like The Royale with layered American Wagyu beef, pork belly and smoked gouda; the Salty Pear (above) with bourbon poached pear, Brie, and whiskey onions; or the $100 Vanderbilt of beef, lobster, foie gras and truffle gouda (served with champagne) fill both plate and mouth. downatthewhiskey.com

Kappy’s
This Maitland mainstay hasn’t changed since it opened in 1967 inside a Depression-era diner; park yourself at a picnic table and savor the roadside atmosphere. A supporter of the Fresh From Florida program, Kappy’s uses locally grown and raised foods in their sandwiches and makes a simple, down and dirty Super Cheeseburger. kappyssubs.com 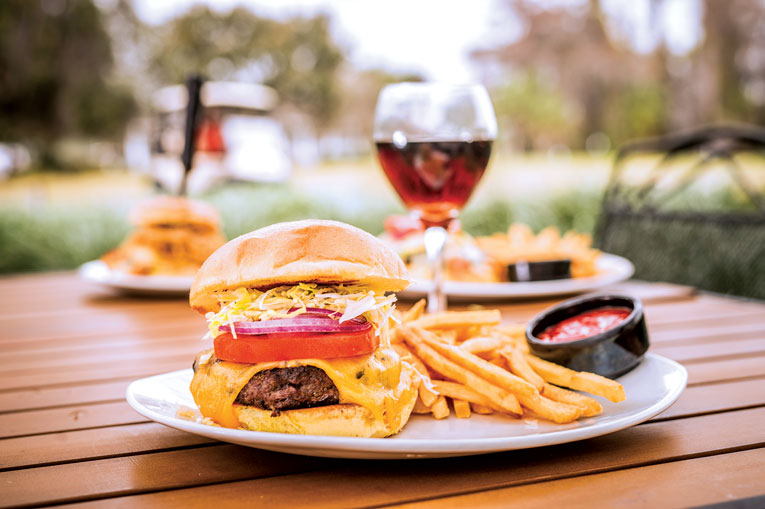 The Tap Room at Dubsdread
The Tap Room Classic Cheeseburger (above) is so beloved that it was inducted into the Orlando magazine Dining Hall of Fame in 2015. Angus beef, hand-formed in a patty that’s charred over an open flame, a secret ratio of beef-to-fat content keeping it juicy yet solid, Oregon Tillamook cheddar, a toasted bun that’s neither too big nor too small, salt and pepper. That’s it. A damn fine burger that has sold in the hundreds of thousands since 2001, and worthy of respect. taproomatdubsdread.com

Spice Burgr
Not to be confused with Gordon Ramsay’s BurGR. “Flippin’ great burgers” is the slogan, and monthly burger creations keep the menu at this downtown Orlando eatery hopping, with combos like beef, salami and pepperoni (The Italian) or the Opa Burger of lamb, tzatziki sauce and feta cheese. spiceburgr.com

Oblivion Taproom
The only place we know of offering an open-faced burger: the “Horse Shoe,” served on Texas toast, covered in fries, bacon gravy and a beer-infused cheese sauce. Other Oblivion highlights: house-made ketchup, a 40-strong beer-on-tap list, and deep-fried Oreos. obliviontaproom.com