Whether bare of embellishment or adorned with every imaginable trimming, hamburgers are a big, delicious business.

Burgers. Meat, bread, maybe some cheese and a squirt of ketchup. Every dad with a rusty grill can hockey puck one, and almost every dubious roadside coach to blue ribbon restaurant has a burger on the menu.

But recently a swarm of national “better burger” chains have launched nothing short of an invasion of Orlando, proclaiming independence from freezers, ambiguously raised beef and assembly line meals. Chains such as Wahlburgers, BurgerFi and Burger 21 have declared our area as Prime Burger territory and, along with chef-driven home-grown restaurants, have taken an Angus beef-sized bite out of traditional fast food as people have become more accustomed to higher quality dining and words like “sustainable’’ and  locally sourced.’’ Not to mention obsessed with animal fat—a perfect burger is, after all, 20 percent fat. 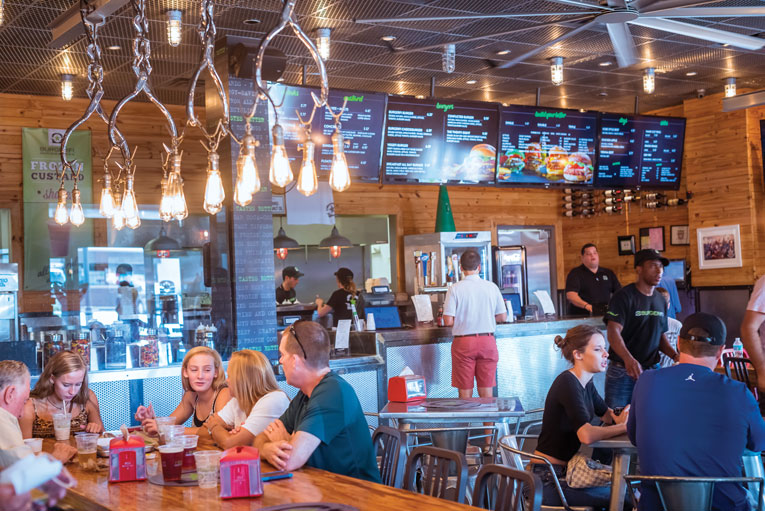 The opportunity to showcase superior ingredients means that local kitchens like Burger Craft and BB Junction can create masterpieces using grass-fed beef and locally grown produce from Florida purveyors. In a world where a “value meal” can be had for few dollars, the “better burger” is a chance to practice a sustainable ethic—and justify a $15 ticket.

The high-end chains are certainly reaping the benefits: Some Shake Shack locations average $4 million annually per location (twice as much as McDonald’s, according to CNBC) with a company stock valuation of almost $2 billion, while BurgerFi, started in Fort Lauderdale, racked up more than $66 million in sales last year with only 72 locations. Both burger outlets have made a big impression in Central Florida. Last year, eager fans mobbed Shake Shack to a standstill when it opened in Winter Park, and in May, Orlando magazine readers proclaimed BurgerFi as the area’s best.

Burgers have evolved from the simple patty on white bread to a dizzying array of options. One person’s pineapple and ghost pepper-topped dream is a chopped sirloin purist’s nightmare, but only personal taste can dictate how outrageous a burger can get—Ernest Hemingway’s recipe for burgers included onions, garlic, relish, and capers, while J.D. Salinger was partial to Burger King.

Although the menu at Graffiti Junktion includes burgers stuffed with Brie, topped with apples or smothered in fried eggs, griddle master Tom Hughes believes in the basics: good quality beef, smoked bacon, and melty cheddar, for a juicy and very popular handheld. “Just watch how you cook it,” he says, “and respect the burger.”

Respect the burger. Steve Gunter, owner of The Tap Room at Dubsdread, says simplicity is the key to his cheeseburger—salt, pepper, open flame, along with lettuce, tomato and onion. (The Tap Room Classic Cheeseburger was inducted into our magazine’s Dining Hall of Fame earlier this year.) Rusty Spoon chef/owner and James Beard Award nominee Kathleen Blake, who designed the menu at the lamentably shuttered Pine 22 burger palace, uses grass-fed beef, but adds bacon and cheese in the middle instead of on top to keep the burger moist while cooking. “Soft, buttery bread and tart pickles really enhance the beef,” Blake says. 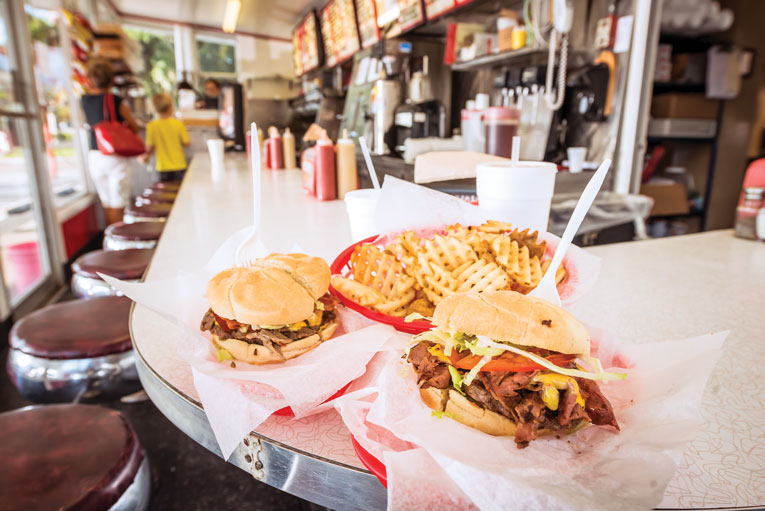 The Bacon Cheeseburger and Earl’s Special (a burger topped with pastrami) at Kappy’s.

On the other hand, going pork belly crazy with flavor combinations can make for great juicy meals, proven by the popularity of the peanut butter burger at Beth’s Burger Bar. “It’s my best seller,” says Beth Steele, who helped create the multi-leveled beauty on our cover.  And the mania for posting every new mile-high marvel on Twitter and Instagram means that someone, somewhere will be curious enough to eat the next foie gras and Gorgonzola burger brainchild. Krispy Kreme burgers have begat beef sandwiched in deep-fried Twinkies, crispy ramen noodle disks and pressed rice.

At the recent Burger Bash competition at Johnny’s Fillin’ Station, The Tap Room took the judges’ prize amid an abundance of creative meat-and-bun masterpieces. An enviable entry from World of Beer added bison to beef in equal measure for a rich, meaty burger, while the juicy bison burger from The Porch (the “People’s Choice” winner) balanced weet and savory with medium rare patties, pimento cheese, bacon jam, and crispy onions. Not all efforts fared as well, and adding bacon, pork belly, even mac and cheese (not a good choice) sometimes fell flat, but the Smoke Stack Burger piled with pulled pork, caramelized onions and cheddar from Wildside BBQ was particularly good.

Regardless of what’s inside the bun, burgers continue to capture attention. “The quintessential American food,’’ a spokesperson at Red Robin proclaims, while the folks at Shake Shack call them nostalgic, saying, “There’s something both exciting and comforting about biting into a burger.”