Microblading fills in the gaps of your eyebrows using natural feathery strokes.

Shereen Toffetti had long lamented her lack of eybrows.“They’re very faint, blond, and there aren’t a lot of them,” says the Orlando homemaker.

About 18 months ago, though, Toffetti discovered microblading—a procedure in which a technician who has been licensed as a tattoo artist applies hair-like strokes to the brow with a special tool. The results were eye-opening.

“They just looked so natural and so good!” Toffetti recalls. And time-saving, too. “I always struggled with the shape of my eyebrows because I penciled them in every day. Now I literally don’t touch them.” 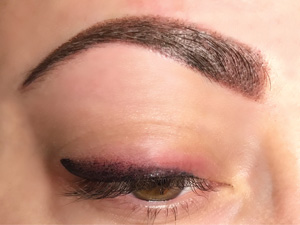 A powder brow and permanent eyeliner

Clients flocking to salons for microblading range from their 20s to their 90s, practitioners say, and their reasons include sparse brows, fair brows, gray brows, over-plucked brows, and brows left bald by chemotherapy or spotty by alopecia.

Professionals say microblading’s popularity surged about three years ago, primarily because it so closely resembles hair. It differs from the permanent makeup of yesteryear, which was applied with a tattoo gun and created more of a stamped-on look.

To create those hair-like strokes, technicians use a manual, rather than machine-powered, hand tool with micro needles.

“Imagine it as a deep scratch,” says Brandi Snyder, who owns Lavish Beauty and Brow in Lake Mary and offers microblading training. Technicians use numbing products—primarily lidocaine—to prepare the area, so there’s minimal discomfort, she says.

Typically costing between $400 and $650, microblading takes two to three hours.

“We numb for 20 minutes while the client is filling out paperwork,” says Tracie Cervero, a makeup artist at Lash Me Lounge in Sanford. “Then we plot the eyebrow’s design with the client, and we talk about color. The actual microblading takes 20 to 30 minutes for each eyebrow.”

The healing process takes four to six weeks, Cervero says, but there’s no real down time. Clients just need to avoid swimming and keep water out of their eyes while showering, she says. About six weeks later, clients return for a touchup, which is usually included in the price.

Microblading can last from eight months to two years, the pros say, depending on the client’s body chemistry.

Some technicians are opting for digital machines that are designed more for permanent makeup than for tattoos. The machines allow technicians to combine the fine strokes of their manual microblading with a powdery look powered by digital technology.

“Just having hair strokes is enough for some people, whereas other clients want a little [color] saturation behind the eyebrow,” says Carrie Brown, who specializes in microblading and permanent makeup at Orchid Spa and Wellness in Orlando.

Michelle Egan sees Brown for microblading and a “powder brow.” A licensed cosmetologist herself, Egan was left with a scar on her right eyebrow following  a car accident. After years of parting her hair to cover the scar, now she is growing out her bangs to show off her eyebrows. Egan says she is thrilled “somebody could fix [a problem] I’ve had for 20 years."

Requirements to perform microblading in Florida