What’s the right type of yoga for you? Read om.

Now that you can find yoga classes all over Orlando, it’s safe to say that this ancient Eastern practice has gone mainstream. But with all the varieties out there—hatha, bikram, power and even laughter (seriously) yoga—just deciding on which one to try can be intimidating. Each type is based on similar physical poses, with variations on such elements as pace, room temperature and breathing.

Here are some forms of yoga you’ll find:

HATHA: This catchall term includes different styles of yoga, but a class described as hatha is likely to include slow, deliberate movements and a gentle pace. It’s a good choice if you’re a newcomer to yoga.

VINYASA: This term refers to movement that’s synchronized to breathing. Vinyasa typically includes more intense stretching and movement than hatha, and it’s based on a series of poses called “sun salutations.”

POWER: This is based on ashtanga yoga, which is fast-paced and intense. It includes constant movement that flows from one pose to the next, and the series of poses is set and unvarying with each session.

IYENGAR: Unlike power yoga, which emphasizes “flow” from one pose to the other, Iyengar focuses on holding poses for an extended period. Proper body alignment is key, and Iyengar includes the use of yoga blankets, blocks and straps to bring the body into alignment.

KUNDALINI: Proper breathing techniques are important with any type of yoga, and in kundalini, breathing is done in tandem with each physical movement to free up energy within the body.

BIKRAM: This is the hottest trend in yoga in every sense of the word. Bikram studios are cropping up all over Orlando, and some established yoga locations have added bikram to their offerings. Bikram is practiced in a room heated to 95 degrees or higher; the purpose is to loosen tight muscles and cleanse the body through sweating. Bikram includes a series of 26 poses; there are other types of “hot” yoga that use a different series of poses.

Even off the mat, there are ways to proclaim your yoga love. The Yoga Wave Necklace from Waves of Gratitude consists of two sterling silver pendants representing the health wave and strength wave, which describe different types of yoga movements. $99.95 at wavesofgratitude.com.

Jewelry Casters is a South Florida company that crafts pieces out of recycled sterling silver. Several of its pieces link to yoga, including the Namaste necklace ($99, above), Om-Ohm Sign necklace ($74.99) and Om-Ohm bracelet ($21.99), all available at rockmyworldinc.etsy.com.

Going to the Mat 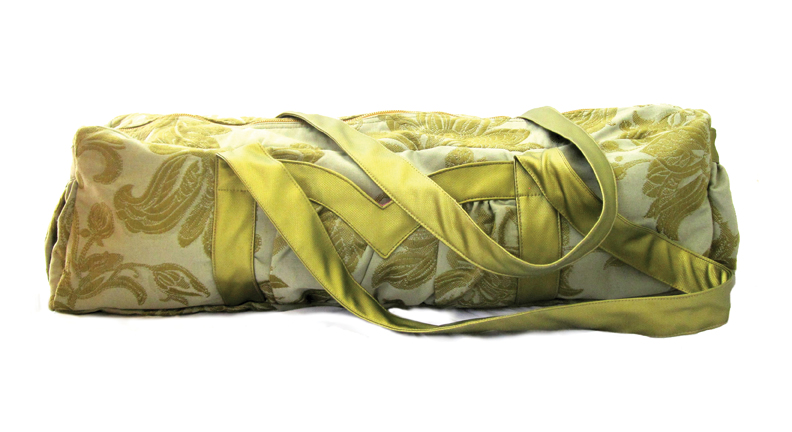 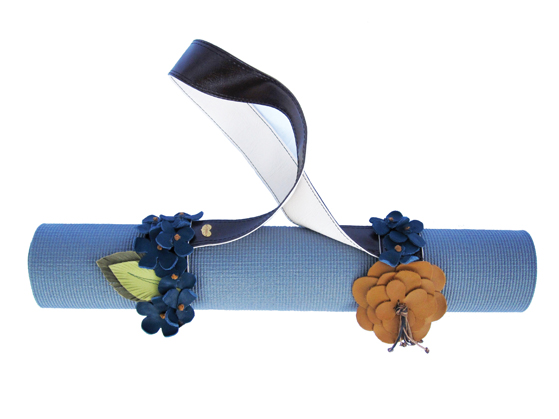 You can find yoga mats at almost any fitness store and many mass retailers, but if you want something special, go to dreamyoga mats.com. Dream offers custom embroidered mats in your choice of four colors (brown, pink, slate blue and bright orange) and five design options (peace sign, skull and crossbones, tree of life, ohm symbol and lotus flower). They’re $62 each.

To tote those mats in style, check out the mat bags and slings at ogorgeous.com. The bags range in price from $85 to $109, and come in such luxe materials as silver sparkle fabric and faux leather. Slings are $18 to $45 and are embellished with pretty details including ruffles and bows; the Enchanted Bouquet style is adorned with suede flowers. 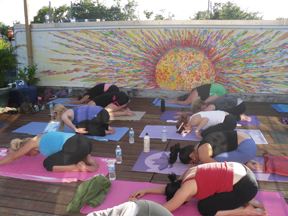 • At Leu Gardens, yoga classes for both individuals and partners are held in the great outdoors. leugardens.org

• If you own a stand-up paddleboard, Paddleboard Orlando plans to offer a “YOW” (Yoga on the Water) class on Lake Bryan at Buena Vista Watersports in Orlando. meetup.com/paddleboardorlando/

• The Loft at Dawchers is a salon and day spa in Winter Park that offers rooftop yoga classes and private sessions. dawchers.com

• On the first Saturday of each month, Bikram Yoga Southwest Orlando offers a community class for just five bucks a person. bikramyogawestorlando.com

This article appears in the November 2010 issue of Orlando Magazine.
Categories: Health & Beauty