Breast Cancer: What Every Woman Should Know 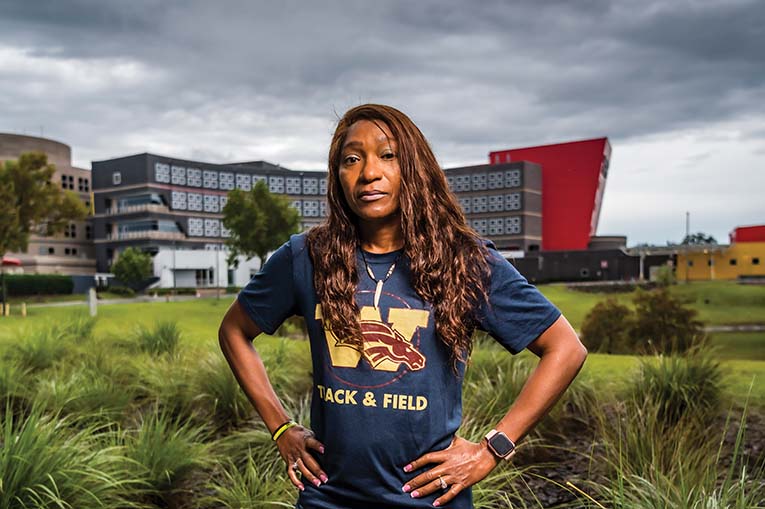 Donette Taylor had no worries about her mammogram, which she underwent two days before Christmas last year.

“I was always normal, normal, normal,” she says emphatically, referring to her annual screening test for breast cancer. As a two-time All-American sprinter and now an active coach for a girls track team at Wekiva High School in Apopka, she was thin, in excellent physical shape, a shade under 50 years and had no family history of breast cancer—hardly the typical profile of a woman at high risk for the disease. “I felt healthy,” she says simply.

But a follow-up mammogram, ultrasound and then a tissue biopsy of a suspicious lump revealed an early-stage cancer in her left breast.

“I was devastated. I couldn’t stop crying,” the 49-year-old Orlando resident recalls on learning the news. “Nobody who knows me could believe it!”

But most breast cancers, like Taylor’s, occur for reasons not yet fully understood, with a complex interplay between genetics and other factors believed responsible for their development. Among the many possible triggers actively under study are environmental exposure to pesticides that mimic the hormone estrogen’s ability to stimulate tumor growth, couch-potato lifestyles that favor inactivity over exercise, and diets rich in fatty foods or unhealthy ingredients.

So far, only 5 to 10 percent of all breast cancers have known hereditary links to two genes, BRCA1 and BRCA2, although researchers recently implicated a third, lesser-known gene. Called PALB2, it may play a major role in breast cancer risk as well as in ovarian cancer and some pancreatic cancers.

Experts say these molecular insights into cancer cells and the pathways they use to spur malignancy have accelerated dramatically since the sequencing in 2000 of the human genome—the DNA blueprint that defines us all. Not only has genetic testing helped reveal those at highest risk for breast cancer and other cancers, they say, but the molecular profiling of patients’ tumors is fueling advances in “personalized” medicine, or treatments vtailored to each individual. Available tests may help physicians not only predict responses to given therapies, perhaps avoiding the need for chemotherapy, they also can flag differences between aggressive and indolent forms of the disease, to determine whether a cancer might return.

“We still don’t know why some women develop breast cancer and others don’t. A diagnosis can be a shock,” says Dr. Anupama Sharma Saigal, a fellowship-trained breast surgeon in Winter Park, with hospital privileges at both AdventHealth and Orlando Health. “But our better understanding of the biology of cancer cells is definitely the reason more women are surviving today,” she says. “With newer technologies, we’re able to target cancers and how they grow much earlier, when these cancers are much smaller, for possible cures.”

In fact, even though breast cancer remains the second-leading cause of cancer death in women after lung cancer, death rates have slowly declined in older women, down 1 percent per year between 2013 and 2018, while holding steady for younger women under age 50, according to the American Cancer Society’s most recent data.

If caught early, before breast tumors spill out of the milk ducts into nearby lymph nodes, the five-year relative survival rate for breast cancer today nears 100 percent, similar to that of women who’ve never had the disease, the data shows. Once these cancers have metastasized, or spread widely, however, 5-year survival falls to 28 percent or less.

The American Cancer Society estimates that 281,550 women in the United States will be newly diagnosed with invasive breast cancer in 2021. Another 49,290 women will be told they have ductal carcinoma in situ, or DCIS, the earliest type of breast cancer, which sometimes leads to invasive disease (see sidebar at right).

“I didn’t want chemo and I didn’t want to risk the cancer coming back in my other breast,” she says, crediting her doctor at the Breast Care Center at Orlando Health Cancer Institute with walking her through the options at a time when she was “too emotional even to think. It was the right decision for me.”

Her ability to make such an intensely personal choice reflects advances in imaging screening technologies that can pick up increasingly smaller lesions that may pose a cancer threat. In the recent past, mastectomy was the “only option a woman with breast cancer had, no matter the tumor size or location,” says Dr. Lisa Minton, a board-certified general surgeon who specializes in breast cancer with AdventHealth Medical Group. “Now, with molecular testing and down-staging tumors with chemotherapy [to more manageable disease]” she says, “we’ve gone from mandatory mastectomy to removal of the tumor alone.”

Some women, however, have no choice but to undergo mastectomy, Dr. Minton and others say. 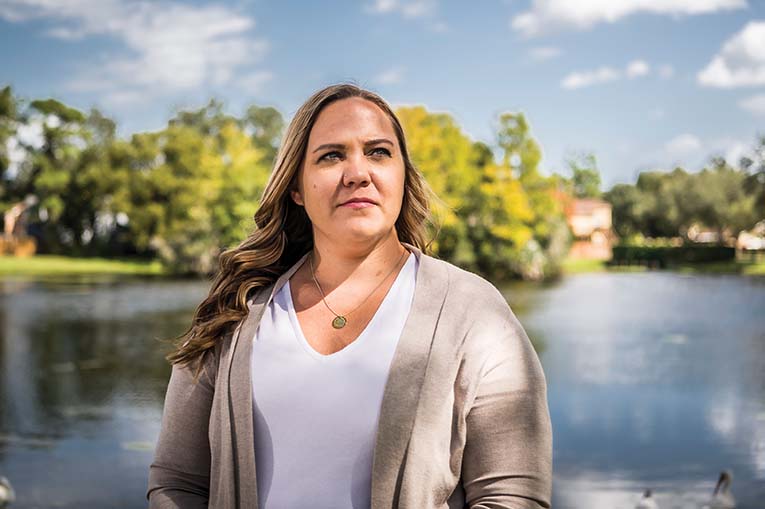 Melissa Miller, for one, faced a dire breast cancer diagnosis just three weeks before her wedding in March 2019, and eventually required this difficult surgery. Like Taylor, she lacked any clear risk factors for breast cancer, except a 20-year history of taking birth control pills, which she later learned likely “fed” her hormone-sensitive tumors. Otherwise, she had no family history, tested negative for the BRCA genes during genetic screening, and obviously, at age 39, fell outside the older demographic usually associated with a higher risk.

But by the time doctors staged her primary tumor, it was “huge”— more than three inches wide with five additional satellite tumors, according to the now-42-year-old graphic designer. Although she felt the growing mass inside her, she says, her regular obstetrician/gynecologist for 18 years dismissed it as the result of “dense tissue” and nothing more, even though increasingly breast density is seen as another possible risk factor for the disease. Miller decided to switch physicians to one with AdventHealth in Orlando. After an initial breast exam, she says, he immediately sent her for a mammography screening, her first in almost five years.

Further tests, including magnetic resonance imaging, or MRI, confirmed advanced disease. And, given the number and size of her tumors, she says, “they really beat me up with chemo” for well over a year, along with a battery of other drugs targeting her cancer’s rare triple positive status.

Unlike triple negative breast cancers, she explains, “I was the exact opposite,” with tumors that were hormonally sensitive to both estrogen and progesterone, and she also tested positive for HER2, the overexpressed protein found on the surface of cancer cells. All three were fueling explosive cancer growth.

As to side effects from her aggressive treatment, especially the chemo, Miller demurs. “I pretty much had everything you can have—low blood counts, diarrhea, headaches, you name it,” she says. But her case illustrates the many ways doctors can distinguish individual traits in cancer cells and unleash strategies to attack them with hormonal and targeted drugs and immunotherapies that work with the body’s natural defenses to outwit a tumor’s ability to “check” or evade detection.

In HER2 positive breast cancers, newer targeted therapies are beginning to emerge even for this once difficult-to-treat cancer, according to Dr. Rebecca Moroose, director of adult oncology research at Orlando Health Cancer Institute. “The HER2 story is still evolving,” she says. Not only is there another drug now available that attaches to a different spot on the cell, Dr. Moroose says, but “we also have beautiful conjugates,” that combine toxic agents with antibodies that carry toxic payloads to penetrate deep inside tumor cells to kill them.

As drug treatments become increasingly precise, radiation therapy has also become more precise and tailored to the individual, experts say. Even though molecular profiling is still in its infancy in radiology, says Dr. Kelly LaFave, a radiation oncologist in Winter Park and a co-founder of Florida Radiation Oncology, “we’re much further along in customizing radiation courses,” to each patient. Some breast cancer patients now can safely undergo four weeks of radiation therapy, compared with the six weeks routinely recommended in the past, she says, depending on tumor size, how far the cancer has spread and underlying health issues.

Deep-breath techniques also have advanced the field, she says, better protecting the heart during radiation, especially in patients with left-sided breast cancers. And optical monitoring with cameras is ensuring that the chest is in proper alignment during the procedure. “If a patient coughs, it stops treatment,” Dr. LaFave says.

Finally, with intensity modulated radiation therapy, or IMRT, radiation oncologists have found that treating the breast and lymph nodes in the chest, rather than the breast alone, improves survival and outcomes. Cancer recurrence is much lower and that’s definitely an advance, notes Dr. LaFave.

Meanwhile, on their respective cancer journeys, neither Miller nor Taylor has yet to experience a recurrence of the disease. Both women say they are doing well. Taylor has gone back to coaching track with a busy second season ahead, starting next month. Miller is taking time away from her graphic design work and family in Oviedo to participate in an early-breast cancer vaccine trial at Moffitt Cancer Center in Tampa.

Miller sees the vaccine trial, testing an immunotherapy drug to fend off further disease, as a hopeful advance in her personal fight, as well as the broader war against cancer. That, and cold tapping, a technique that preserves the hair during chemotherapy by freezing the hair follicles.

“I have a lot of photos of myself with frozen hair on top of my head,” she says, laughing. “It was painful, but I was able to keep 75 percent of my hair” [while undergoing chemotherapy].

As for advice to other women, Miller doesn’t mince words: “If it doesn’t feel right, check it out,” she says. “Don’t be more scared of the treatments than getting the answers you need.”

Taylor, too, offers straightforward advice about screening. “Do not miss a mammogram. Do not miss a single one,” she warns. “What if I had missed mine?”