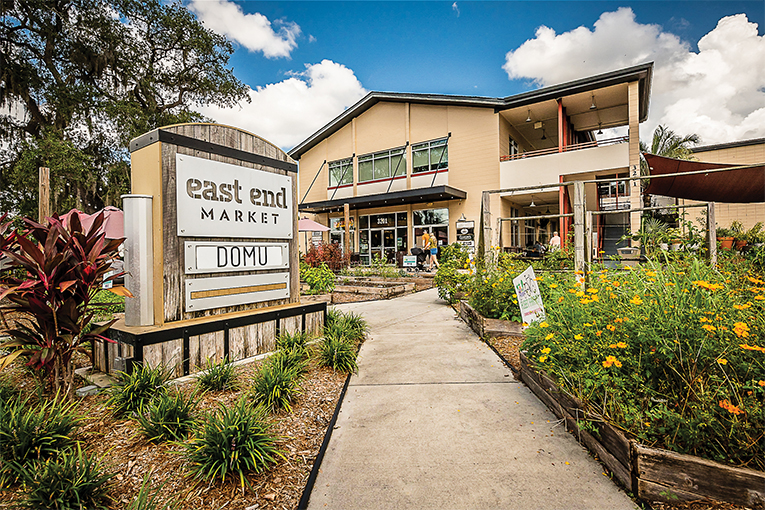 East End Market features a vast array of artisanal vendors in one marketplace, from bakers to pasta makers to coffee roasters. (ROBERTO GONZALEZ)

East End Market in Audubon Park is Orlando’s flagship food hall, founded by Central Florida native John Rife, who has a knack for curating vendors. In the market’s almost 10-year history, some of Orlando’s most celebrated food businesses have passed through the market. Kadence recently won its first Michelin star and started as a seven-seat sushi bar in East End. Gideon’s Cookies, whose Disney Springs location is so popular they’re forced to use a virtual queue to reduce crowd size, still occupies space in the market. 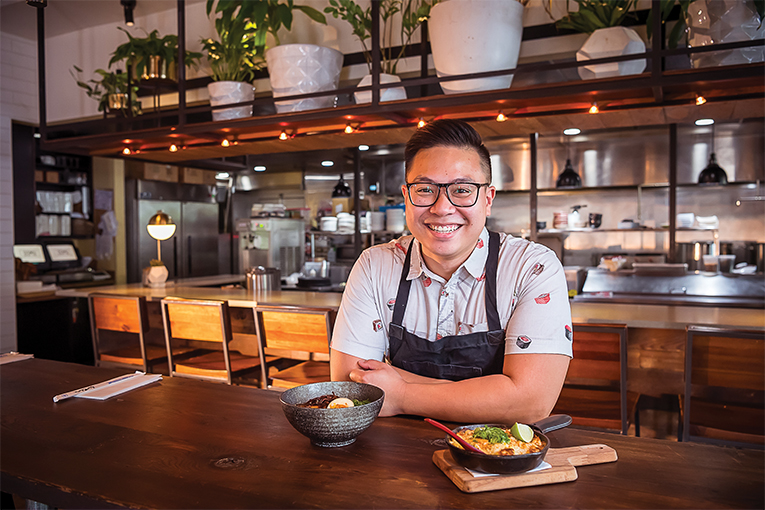 “These people were plenty talented without us,” Rife said. “We just helped to add a little fuel to their tank.” East End has two floors of food, and retail businesses, with plenty of outdoor seating in the AstroTurf-lined courtyard. Domu, a popular ramen restaurant honored by the Michelin guide with a Bib Gourmand, is attached to the market. If you are going for ramen, show up early and get your name on the waiting list. It fills up fast.

I tried “The OG” from Winter Park Biscuit Company, a fried vegan “chicken” cutlet on an oat buttermilk biscuit. Although meat-free, it was far too good to be healthy. Directly across from the vegan eatery is Hinckley’s Fine Meats, offering an array of smoked and cured meat sandwiches and scratch-made charcuterie. Smear some of Hinckley’s country pâté on a crust of bread with some Dijon, and you will swear you are in France.

It’s been said the fast-growing, quietly hip Sanford is Orlando’s Brooklyn. A cool, affordable, not-too-far away sister city. So it’s only appropriate they have their own food hall. Henry’s Depot, an 8,000-square-foot space built in a former railway yard, is a satellite location for some of Orlando’s most trendy eateries. There’s Taglish, specializing in Filipino-American cuisine, Dharma Southern Kitchen offers vegan comfort dishes, and the Greenery Creamery serves Orlando-born, artisanal ice cream.

I tried Dharma’s fried green tomato sandwich–breaded and fried green tomatoes stacked between thick slices of Texas toast, smeared with a smoked eggplant remoulade, balanced out the garlicky kale garnish. Afterward, I couldn’t resist a scoop of the electric blue cookie monster ice cream from Greenery Creamery, decadent cookies and cream. It might leave you looking like you made out with a Smurf, but it’s worth it.

Henry’s Depot is named after Henry Ford, whose history in Sanford dates back to the 1800s. Owner Sean Kelley has done a fine job putting that history on display. You’ll find blown-up photos of the old railway yard throughout the space, which Kelley dug out of Sanford Museum’s archives.

He also added a front porch, giving the hall a Southern charm. It’s furnished with beautiful Adirondacks, handmade by a local fireman who does woodwork on the side.

The Basin anchors the Depot, a Florida swamp-themed bar with golden alligators climbing the walls. They have a creative selection of craft cocktails, like the Black Bird–gin with homemade blackberry mint jam, or the Kentucky Picnic-Bourbon with fresh watermelon, lemon, and jalapeno simple syrup. 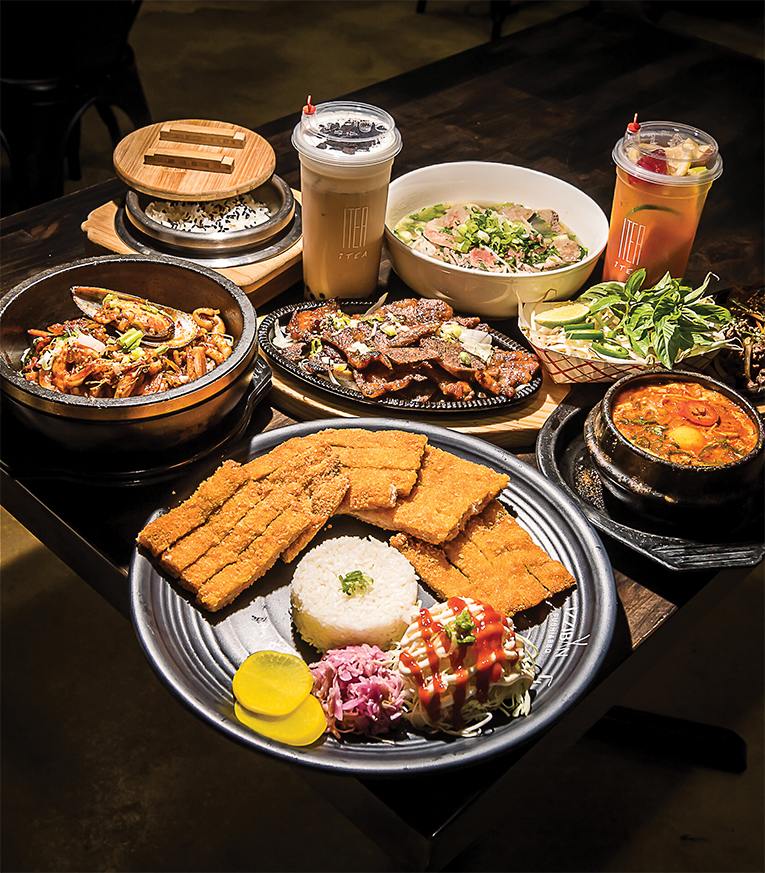 An argument could be made that Lotte Plaza Market is a grocery store with a cafeteria, not a food hall. But what is not up for discussion is the quality of the food. It’s delicious.

There are five choices in the no-frills, sparsely decorated cafeteria. Three offer Korean food, one of which doesn’t even bother translating the menu into English, which is always a promising sign.

There’s Taglish, the odd-man-out for the less adventurous eater with its Westernized offerings like fried chicken sandwiches and cheeseburgers. There’s also a Vietnamese pho shop. 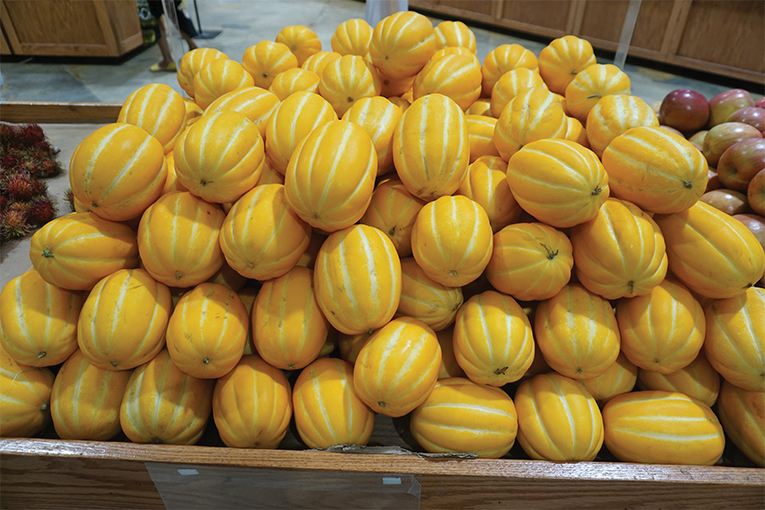 I went with the pork katsu platter from Izziban Katsu. It was a perfectly fried pork cutlet served with a sweet and sour brown sauce. It came with a shredded Napa cabbage salad and a cup of homemade dashi.

I also tried the kimchi soup from Jeon-a spicy soup with kimchi, tofu, and pork. It was still boiling when it arrived at the table and was so tasty I had to remind myself to slow down so as not to scald the roof of my mouth.

The market is the most well-stocked Asian market in a city with no shortage of Asian grocers. A highlight was the meat department, which had pre-marinated pork bulgogi, wagyu short ribs, and beef brisket, each sliced paper-thin. Take a trip over to the kimchi aisle, and you have everything you need for Korean BBQ at home.

Avalon Park in East Orlando is a self-contained community with over 23,000 residents and 150 retail spaces. Their latest addition is a food hall called, Marketplace at Avalon Park.

The Avalon Park group closely manages Marketplace’s look, giving it the uniformed feel of a food court. But that is not necessarily a bad thing. It’s a well-designed, comfortable space hinged around Bowigens Beer Company’s open-air taproom, with more than 20 beers on draft. For non-beer drinkers, Avalon General, “a general store for the modern-day,” has a wide selection of wines by the glass.

I was happy to see two of Orlando’s oldest food trucks have found a home in Marketplace–NOLA, which started as the Voodoo Kitchen food truck in 2013, and KBBQ, which has been offering Korean bento boxes out of their food truck since 2011.

If you see “fried cheese rolls” on a menu and can summon up any level of self-control, you are stronger than me. At KBBQ, they combine sticky white rice with mozzarella, roll it up in a flour tortilla, dunk it in a deep fryer and serve it alongside a spicy mayo the color of radioactive Thousand Island dressing. Need I say more?

I also tried the Frito pie from BBQ 50. A hearty chili with pulled pork, smoked brisket, and baked beans, mixed with beer cheese from Bowigens, piled on top of a bed of Frito’s scoops and finished with fried jalapeno chips and a dollop of sour cream. Once again, need I say more?

Home to Crooked Can Brewing, Plant Street Market in Winter Garden is the only food hall in the Orlando area with a brewery. It is also one of the most family-friendly halls on our list, with lots of green spaces for children to play while mom and dad have a pint and a bite to eat.

Built on the site of an old apartment complex, the red brick hall has a historic, industrial look, which fits in nicely in downtown Winter Garden. The outdoor patio, which runs the length of the building, is shaded by giant oaks draped in Spanish moss.

In addition to being kid-friendly, Plant Street encourages you to bring your K-9 friends. Every second Sunday, Cause 4 Paws brings puppies in for adoption.

The Local Butcher, in the hall’s center, has an impressive offering of steaks, including bourbon or red wine-infused dry-aged ribeye and A9 Australian wagyu. They also have a wide selection of homemade sausages–hot and mild Italian sausages, chorizo, and bratwurst made with Crooked Can Beer.

One of the more recent additions is Hunger Street Tacos. It’s light, sweet, and bready, a perfect accompaniment to a hot summer evening. I tried the Suadero, piled high with shredded beef brisket, covered in a tangy green salsa, and served on a freshly made corn tortilla. To drink, I went with Crooked Cans’ flagship lager, Florida Sunshine Lager, which took a silver medal at the Great American Beer Festival, finishing second in a contest with over 5,000 entries. 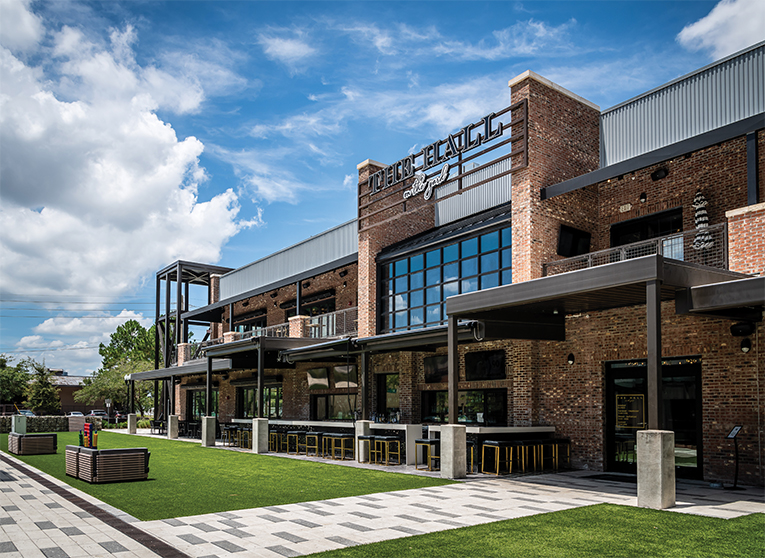 The Hall on the Yard, Ivanhoe Park

The Hall on the Yard in Ivanhoe Park, owned by former NBA player turned restaurateur Jamal Wilson, is a fine dining food hall offering full table service. Think of it as a high-end restaurant with eight individually owned kitchens featuring a different cuisine. Wilson’s one rule is no franchises are allowed.

You won’t find Frito pies or deep-fried corndogs at The Yard. The offerings are more refined, like the caramelized cauliflower florets with whipped goat cheese and pistachio pesto served on a grilled focaccia crostini from The Chef and I. 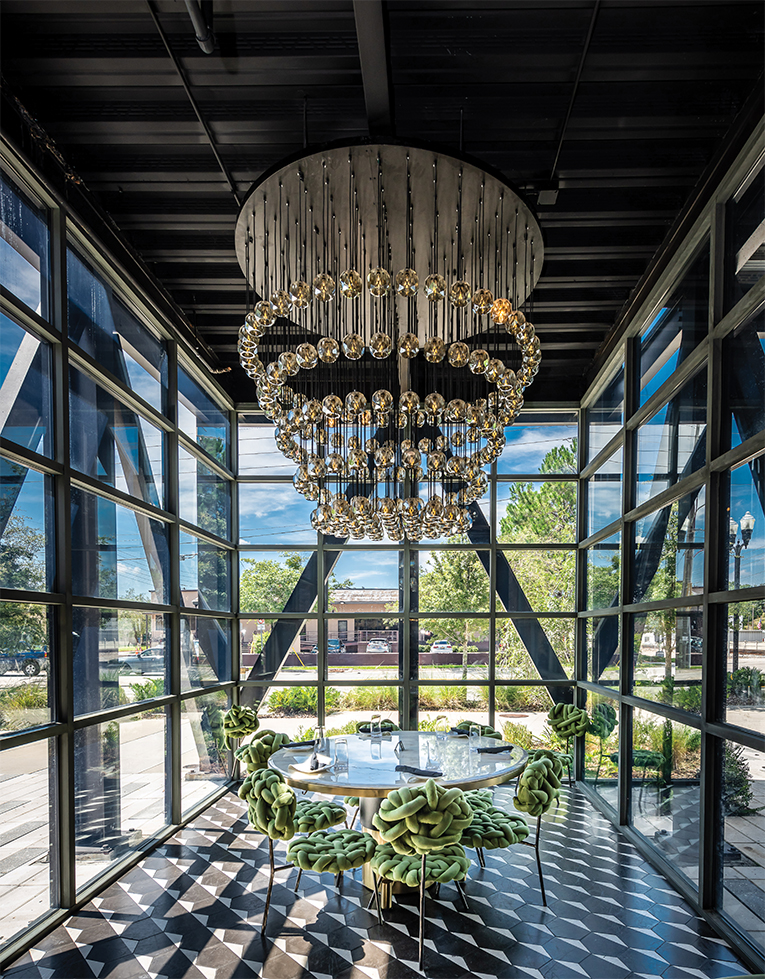 Pasión offers a modern take on classic Mexican, Puerto Rican, and Cuban dishes. Traditionally, taquitos are rolled and fried flour tortilla tacos. At Pasión, instead of frying, they pan-roast their taquitos in garlic-infused olive oil, making for a lighter, more flavorful taco. I tried the hatch green chile chicken taquito. It was good on its own, but I recommend taking it to the next level by dunking it in their birria consommé.

Wilson personally designed the 12,000-square foot space. It is dark, elegant, and grandiose. The stairwell is lined with the busts of The Notorious B.I.G., David Bowie, and Abraham Lincoln, made by a local artist. The ceilings are covered in paper roses, white downstairs by the restrooms, and black in the event spaces on the second floor. You’d swear you were in a high-end, over-the-top Las Vegas eatery if you didn’t know any better. 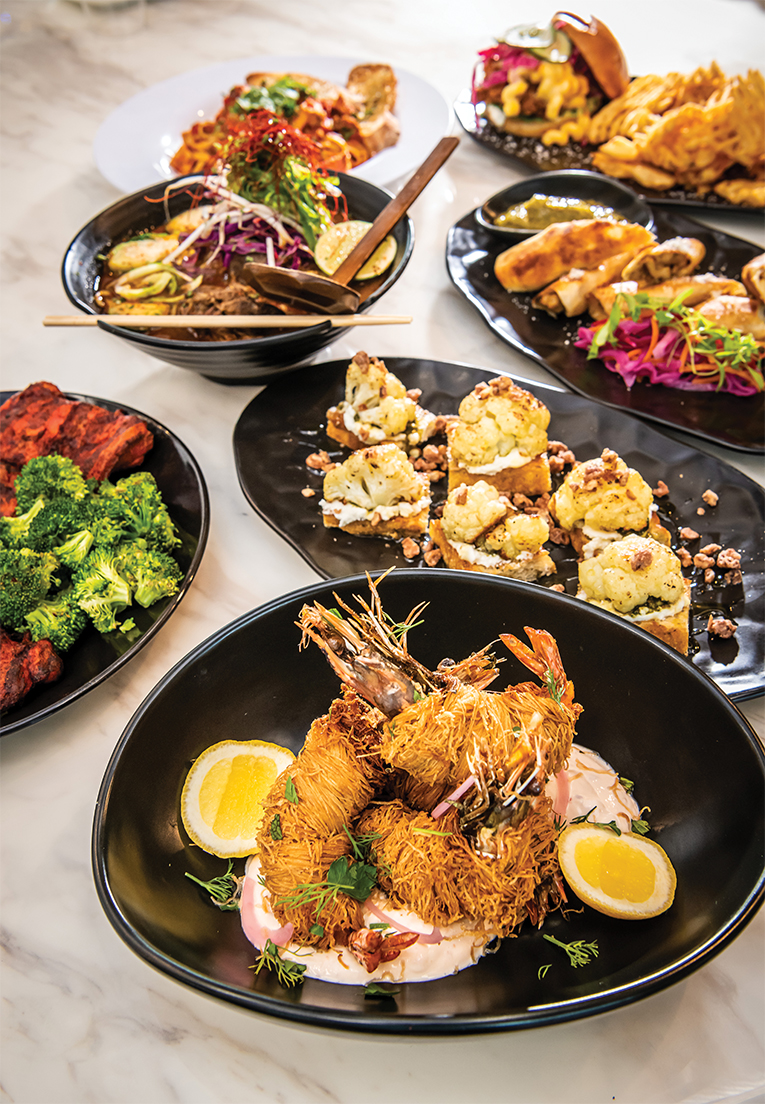 Picanha is a cut of steak popular in Brazil. Taken from the top of the rump, it has a thick fat cap and tends to be tender and juicy. It is a challenging cut to find in the United States, but if you are in Orlando, you can pay a visit to Steak it Easy, one of five semi-mobile food vendors at A La Cart. 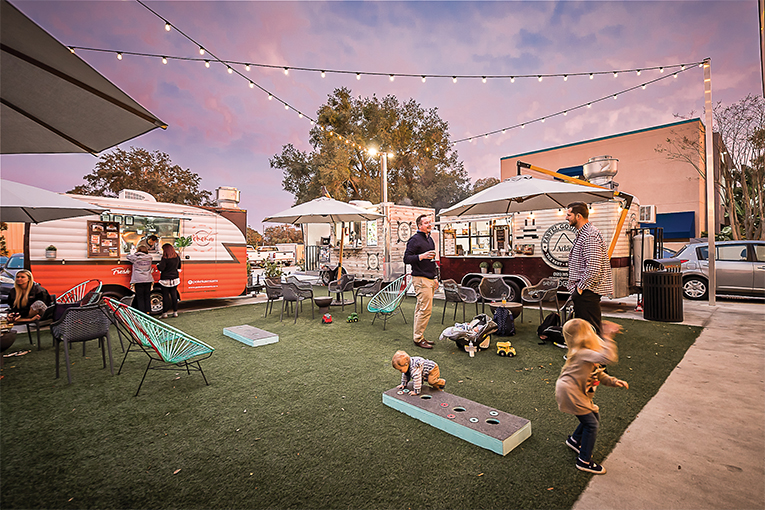 A La Cart is a unique take on a food hall. It’s like a pop-up food truck event that never went away. Each vendor parks their trailer in the outdoor space. Diners can either sit outside or take their food to one of the high-top banquet tables inside the open-air pavilion. It can get a bit sweaty, especially in summer. But isn’t that part of the charm of street food?

A La Cart features up to 15 draft beers, ciders, wines, and cold brew coffee. They also have a bottle shop if you want to bring some craft brew home. If you have a sweet tooth, pay a visit to Dulce Pecado for chocolate-covered, made-to-order waffles dunked inside one of their over-the-top milkshakes or sundaes. 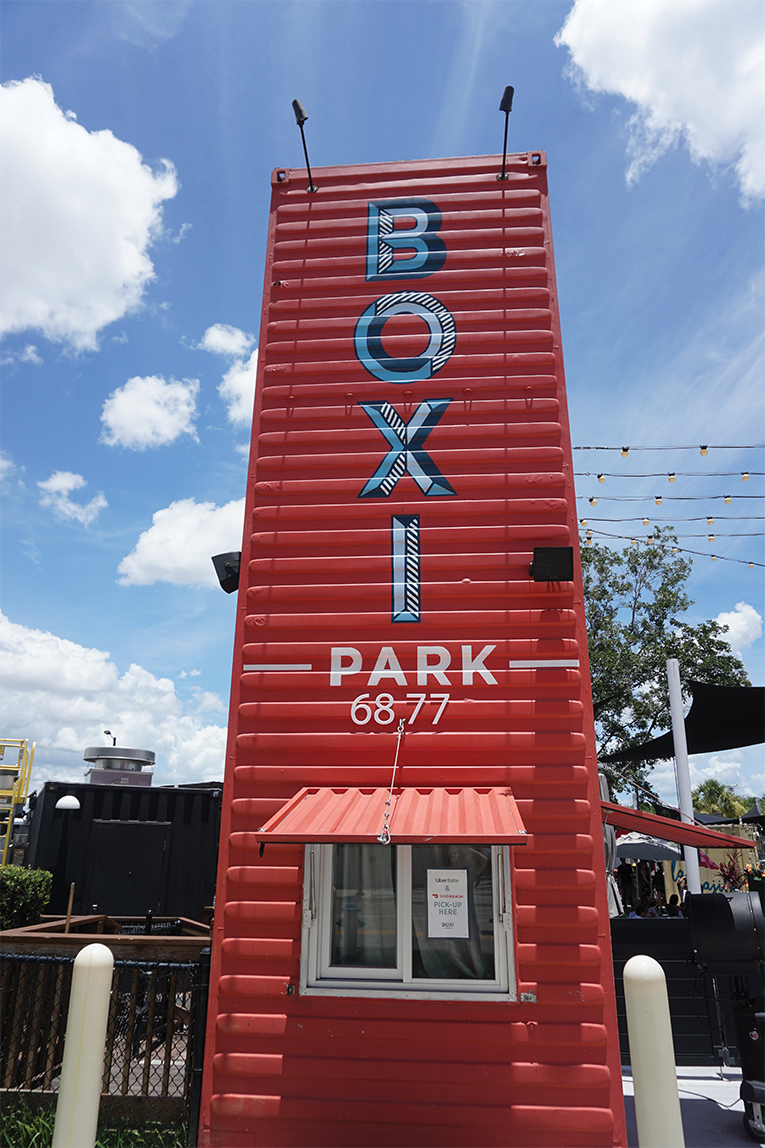 Boxi Park is one of the many local food halls in Central Florida. (ROBERTO GONZALEZ)

Boxi Park Lake Nona is a LEGOLAND of brightly colored shipping containers. It has the feel of a carnival on a Saturday afternoon, with a shipping container stage showcasing live music, two beach volleyball courts, a playground with a plastic jungle gym, and a junior-sized climbing wall.

Even though the space is mostly outdoors, they do a great job keeping you cool with plenty of shade, strategically placed fans, and automated misters. Hops and Vine has a selection of beer brewed by their neighbor, Park Pizza & Brewing Company, along with a curated list of wines. 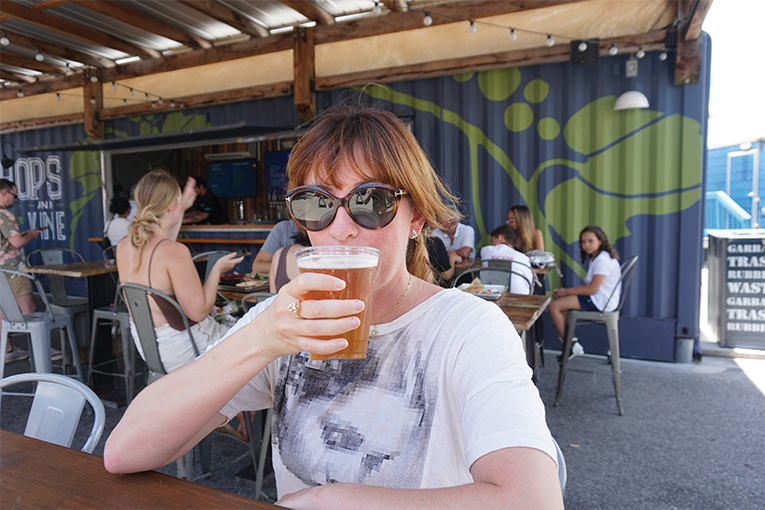 Based on its many 5-star Yelp reviews, I tried the original lobster roll from Claw & Order–poached lobster, hollandaise, Japanese mayo, and chives. It was served in a butter-toasted brioche bun. How could anything with hollandaise, mayo, and extra butter on the bun be anything but? I was expecting large chunks of lobster claw but got shredded morsels of meat instead. Still, it was delicious.

Boxi Park is a 30-minute drive from Orlando. If you are in the mood for live music, good food and drink in a family-friendly environment, or even just craving a change in scenery, it’s worth the drive.

This article appears in the September 2022 issue of Orlando Magazine.
Categories: Dining
Tags: Central Florida, dining, food, food and drink, Food hall, Orlando, Roundup
Want to read the whole issue? Download and read this issue and others on Magzter.