There’s lots of excitement in June at Orlando’s attractions. 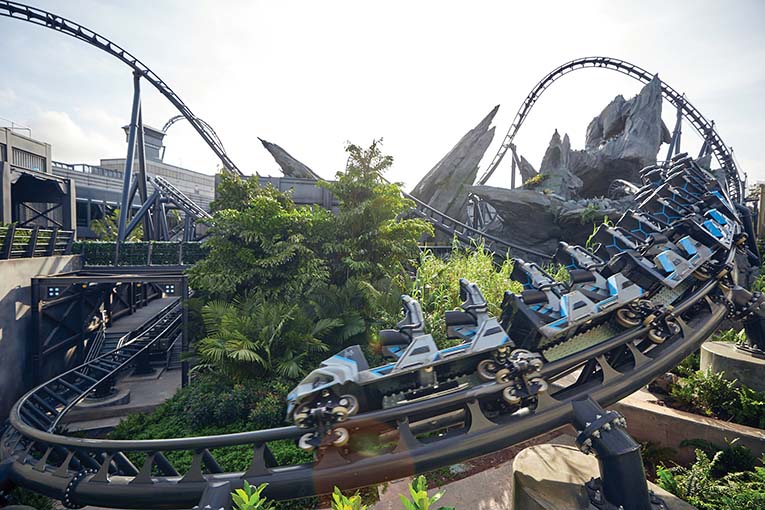 Ever wish you could insert yourself into the movies? Well, be careful what you wish for, because Universal Orlando Resort just brought “Jurassic World” to life, and you’ll be chased by—and even come face-to-face with—hungry velociraptors on its newest coaster. But you’re in good company: Chris Pratt, Bryce Dallas Howard and Henry Wu reprise their roles to aid in your escape.

The Jurassic World Velociraptor will wow even the most hardened thrill seeker; its arrival makes it Florida’s fastest and tallest launch coaster. Riders board vehicles that have been enhanced to intensify dips, tight turns and plunges along the 4,700-foot track, which at times sends them through the raptor’s paddock, into the air and more. There’s a barrel roll just above the Islands of Adventure lagoon, a series of near misses and a number of high-speed launches—the signature “Top Hat” propels riders 155 feet in the air, then immediately into an 80-degree drop, Universal’s steepest. Heart pumping yet?

Also new at Universal is an 8,300-foot flagship Universal Studios Store, with more than 2,000 signature and eclectic theme park collectibles, including merchandise from “Jurassic World,” “Despicable Me” and “Harry Potter.” Fans of the latter can scoop up Hogwarts-inspired tableware, athleisure wear and toys. In addition, the first-ever Universal Legacy Store showcases an extensive selection of items inspired by the studio’s beloved attractions, such as Jaws, Back to the Future—The Ride, MEN IN BLACK Alien Attack and Revenge of the Mummy. universalorlando.com

This article appears in the June 2021 issue of Orlando Magazine.
Categories: Arts and Events
Tags: Jurassic World, Universal Orlando Resort
Want to read the whole issue? Download and read this issue and others on Magzter.