Tom Kohler helped shape the look of Orlando. We take a look back—and ask him to make some predictions.

Where Orlando is headed is anyone’s guess, but one thing is certain: where it ends up is only a temporary resting place.

In 1995 Orlando magazine interviewed Tom Kohler, who at the time was the battle-tested leader of Orlando development, and redevelopment, as executive director of the Downtown Development Board. He marveled at the progress of the previous decade—a new City Hall; Centroplex and the Expo Centre; and a half-dozen new hotels, banks and office towers. He predicted more great things to come, and he was right.

It was easy for Kohler to forecast downtown’s future, since he was helping pull levers to make things happen. Some of the changes he predicted were under way, or about to start, including conversion of the old courthouse to a new home for the Orange County Historical Museum, demolition of the outdated courthouse annex and creation of a spacious plaza creating a link between Wall Street’s bustling bars and shops, Orange Avenue and Central Boulevard, the epicenter of downtown.

Kohler correctly predicted that a supermarket would return to downtown, though he had tried and failed for a decade to lure one back to the city core. He foresaw the rebirth of aging neighborhoods such as Thornton Park, in part because he helped put a stop to hodgepodge “repurposing” of homes into nail salons and small offices that had no parking.

Kohler retired in 2002, after 26 years with the city dating back to the days of Mayor Carl Langford, for whom he served as chief of staff in the 1970s. But Kohler has stayed in the thick of things as senior consultant for a prominent urban planning and research group called GAI Consulting Inc. So Orlando magazine asked Kohler for his take on what lies ahead for the city that he has helped shape. 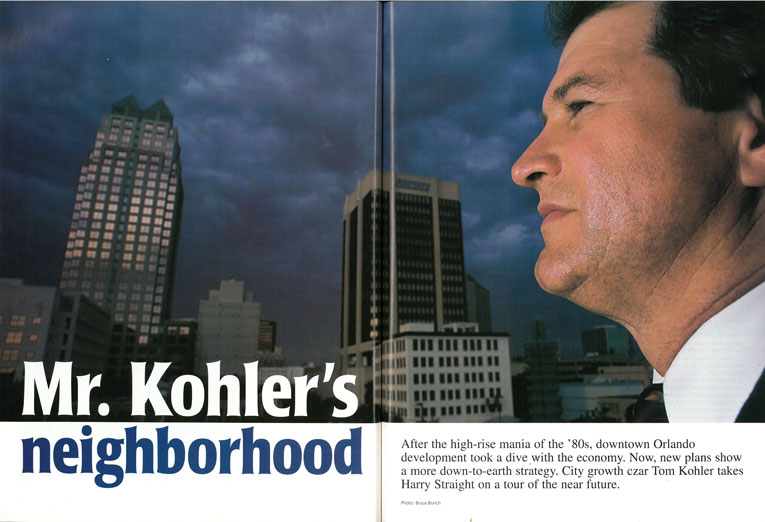 The Past is Still Present

From his offices on the seventh floor of the GAI building downtown, Kohler can see Orlando’s past and future. The view includes leafy oak trees off South Street, casting shade for a century or more; and a collage of older homes and cottages, with restaurants and office towers weaving in and out of the tree canopy. Brick streets dating from the 1920s meet fresh asphalt in a mix that might be called eclectic, though others sometimes use less flattering adjectives. The result is a canvas of subtle colors and sounds, the malleable landscape of a growing city that Kohler says retains some of the character of its youth. Nearby Lake Eola, for example, was Orlando’s central gathering spot by the early 1900s, and it still is—more so, in fact, than ever. A recent overhaul of the iconic fountain, landscaping and better security has made the park more appealing to a growing number of singles and families living downtown.

Look for more of those kinds of efforts to preserve and enhance the “good bones that the city has,” Kohler says. “I’ve been to lots of cities and I can tell you that Orlando is blessed with good neighborhood infrastructure, some of it fallow at times but not decaying like in a lot of towns and cities where they have industrial right downtown, going downhill.”

Look for big improvements in the historically black Parramore neighborhood, Kohler says. Yes, people have made that prediction before, but this time it’s different, he says. With the economy more stable, the flow of tax dollars and private dollars will increase and “in the next 10 years, we’re going to see more investment [in Parramore] than ever before.” But there’s another reason for optimism, Kohler says.

A new nonprofit started and led by local business leaders such as CNL Financial CEO Tom Sittema, called Lift Orlando, is taking a holistic approach that’s never been tried before in the community. Lift is targeting weaknesses such as education, housing and jobs in a coordinated full-court press. The Orlando Magic, CNL and a dozen or more private firms and groups with vital stakes in the community are all on board.

Look for another supermarket to open downtown, Kohler predicts, along with a surprising increase in one-bedroom rentals. That’s right, one-bedroom units will be in high demand as more young singles arrive, Kohler says, and a downtown campus for the University of Central Florida will be a catalyst. “I’m certain the campus will be built, and it’s going to be a remarkable transformation,” he says.

A new museum of art will move downtown from Loch Haven Park, a third addition to the new Dr. Phillips Center for the Performing Arts will be built, developer Craig Ustler will steer the $1 billion Creative Village mixed-use project to completion, and in less than a decade hundreds of workers will be commuting from Kissimmee to jobs in Orlando on an expanded SunRail train. A Major League Soccer stadium being built with private financing will complement the city’s renovated Citrus Bowl, and, by late 2017, key elements will be operating simultaneously for the first time.

In the 1990s Kohler called it the golden age of downtown Orlando. The Great Recession of the mid-2000s did put the brakes on, but it was a temporary pause that the city has seen before, and the gas pedal is about to hit metal again. “Now,” Kohler says, Orlando is “entering the platinum age.”