Breanne Anderson fought off cancer and became a caregiver herself.

It was December 1994. Breanne Anderson was 15 years old and had completed three years of treatment for non-Hodgkin’s T-cell lymphoma and had recently undergone a bone marrow transplant after leukemia signaled an end to her remission. Yet through her devastating illness, she volunteered 20 hours a week at Aloma Elementary School, where her mother served as a guidance counselor. It was an accomplishment for which Breanne was featured that month in Orlando magazine.

More than 21 years later, Anderson is still living and giving—these days as a social worker at Orlando Regional Medical Center right next door to Arnold Palmer Hospital, where she once fought for her life. 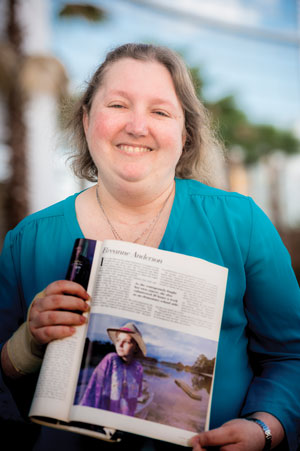 “When I was a patient, I told Dr. Vincent Giusti that I would always come back, and one day he would see me work here. I see him in the halls, and he stops whatever he’s doing and says to whoever he has in tow, ‘Let me introduce you to my miracle,’” Anderson says. Giusti was among the former caregivers who attended Anderson’s wedding eight years ago.

Anderson remembers how, shortly after starting her job in 2003, she saw one of the nurses who took care of her as a teenager. “She didn’t recognize me, so I covered my head and my mouth so all she could see were my eyes. She started crying because the last time she saw me, I was a patient at Arnold Palmer getting ready to go down to St. Pete for my transplant. She didn’t know whether I’d lived or died.”

The nurse, Tracy Ray, remembers that day well. “You never forget their little faces and eyes. What she kept through it all was her heart and her inspiration.”

When appropriate, Anderson shares her story with patients. “Still, every now and then, I’ll be talking to a friend or a sibling or a mom of someone who didn’t make it, and I have that thought in the back of my mind, ‘Why am I here, and why are they not?’ I’d like to think the reason I’m here is to help people who need help.”