Ad saleswomen, typesetters, compositors, editors, writers, journalistic pioneers, local celebrities, best friends: These are but a few of the labels you could pin on Carole DePinto and Elaine Schooping, a dynamic duo that helped propel Orlando-Land—as Orlando magazine was once known—to success in the early 1970s. 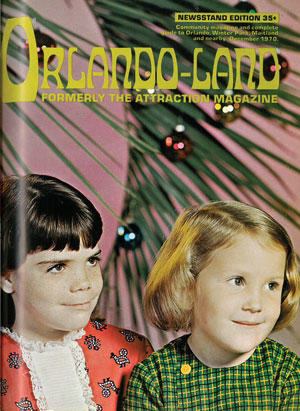 “We worked out of a back bedroom of publisher Ed Prizer’s house in Maitland for maybe three years,” recalls the 84-year-old Schooping, a longtime arts writer. “It was very primitive. We had Selectric typewriters. I did the layout, helped with the typesetting—I did a little bit of everything. I was always the most expert proofreader anybody could have.”

DePinto, a former food writer and managing editor who remained on staff until the late ’90s, recently turned 80. She and Schooping haven’t worked together in years, but the intense bond the two formed in their magazine days remains. “Elaine was my best friend. I consider her my best friend to this day, even though we only talk on the phone now.”

Though Schooping now lives in Seminole County and DePinto lives in Volusia, the women used to believe they would always be together. “Carole and I grew old together,” says Schooping. “We used to say we would end up side by side in rocking chairs on the porch when we were 90.”

“Carole’s family and the Prizers were like family to us,” Schooping’s daughter, Lauren, says. Covering the Orlando area during the early days of Walt Disney World and the Space Coast boom brought perks for both families, such as free admission to Disney. “We were their guinea pigs,” the elder Schooping says.

Both prolific writers, the two journalists wrote in first person, weaving their own experiences and backgrounds into their stories. “Mr. Prizer wanted it to be personalized. He wanted people to identify with us. I wrote it like a diary, really,” DePinto says. And people did identify, recalls her daughter, Cara Wilhelm. “Mom was a celebrity in her own right. I could go anywhere and drop her name and get special treatment.”

The women’s dedication came at a price. “My mom’s job was 20 hours a day, seven days a week,” Wilhelm says. “She would be at work all day and then have to go to a restaurant or bar and then write about it the next day. You really had to be tight on these schedules because a month isn’t that long.”

Lauren Schooping and Cara Wilhelm grew up in the fast-paced publication world and quickly became used to the process of magazine production. They often observed pages being built and copy being edited on the composing room floor. Then one day, the girls–Schooping, then 7, and Wilhelm, 4–went from being behind the scenes to being celebrities in their own right as they were asked to pose for the December 1970 cover.

Wilhelm, the youngest of four children, was painfully shy. “I had a gap between my two front teeth, so I didn’t like to smile. I remember the photographer telling me to smile, and I’m like, ‘I am!’ ” she laughs. “People came up to me at daycare and stuff and said, ‘You’re on the front of that magazine!’ ”

“I remember that day because I wouldn’t stop laughing,” Lauren Schooping says. “I’m just kind of a goofball. I still look the same, so people say I haven’t changed a lot in looks or attitude.”

Their moms miss those glory days. DePinto misses what Orlando once was. “I enjoyed watching Orlando grow, but I think it’s gotten too big for its britches,” she says pointedly. But Schooping says even amid the development she has seen since the 1970s, something special remains. “The whole area has grown, but it still has a small-town mentality. It’s pretending to be New York, Detroit or Chicago, but it’s still Orlando.”