Orlando-Land was all over the opening of Walt Disney World in October 1971.

From the December 1971 issue, Publisher Edward Prizer had this to say:

So this is Disney—You can’t walk around this place for even an hour before you feel it touching you, however obliquely. It is the intangible that has led visitors to call the people at Disney World the number-one attraction.

I think some are even shaken by it. They can’t quite assimilate the ever-present smiles and warm greetings after coming so lately out of snarling, scowling city streets. They don’t comprehend that it was once this way along all the little main streets of America. It was this way in Southern Pines (N.C.), where I grew up; and then I went to the city, and it wasn’t that way any more.

It’s kind of nice to see it again.

Also in the issue, these tidbits of “Disney World Miscellany”

“Suddenly all the alarms and warnings of impending doom have been silenced. There have been no monstrous traffic jams on the expressways, no 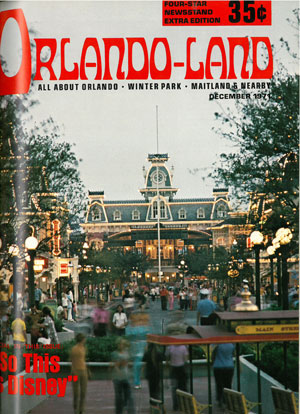 “It would be impossible in limited space to summarize the multitude of impressions we carried away from our first visit to the Magic Kingdom… Just a few to start. Favorite attraction: It’s a Small World, which blends sound, color and movement into a consummate work of art. Most hilarious: the Country Bear Band, of course. Most awesome: House of Presidents, the huge historical paintings impressing us even more than the animated figures. Most eye-catching costumes: the blue hunt garb worn by the tour guides. Most delightful surprise: the groups of street musicians playing around every turn—Blue Grass trio, Dixieland band, steel drum band, barbershop singers and others.”

“Walt Disney World has what is probably the world’s most efficient reservations clerk: an RCA computer. Reservations are fed into the computer. Instantly, the confirmation is flashed on a video screen and automatically followed up by a printout to be mailed to the guest. The computer deducts the room from hotel inventory to prevent overbooking.”