​Orlando magazine’s inaugural Most Powerful People list appeared in 2001 (at that time there were just 20 listed). At the top: hotelier Harris Rosen. “The self-made Emperor of International Drive is the strongest voice in Central Florida’s leading industry,” the accompanying story said. Fifteen years later, Rosen remains a major force in tourism, with ownership of seven hotels, more than 6,500 rooms, and plans to expand. But Rosen is a big player in another area: helping disadvantaged kids get a head start. It’s been 22 years since he started providing free daycare and pre-kindergarten to children in the low-income Tangelo Park neighborhood, along with full scholarships for every student there who graduated from high school. Now, he’s doing the same for Orlando’s Parramore neighborhood, footing the bill for a preschool program at a new $41 million Orange County district school that will open in about a year and serve students through eighth grade. Those who go on to graduate from Jones High School will get the royal Rosen treatment—full scholarships to college. Rosen didn’t wait till 2017, though, to start distributing the wealth. In May he awarded scholarships to 17 Jones graduates.

Kalogridis leads a cast of thousands—74,000 “cast members” to be exact, which makes Walt Disney World the largest single-site employer in the country. The resort, which celebrates its 45th anniversary in October, is nearing completion on the Disney Springs shopping-dining-entertainment complex and recently added nighttime experiences to Animal Kingdom (Expedition Everest, oh my!). In May, ESPN Wide World of Sports hosted the Invictus Games, Prince Harry’s event for injured, wounded or sick armed service members. Coming in 2017 is the much anticipated Pandora: The World of Avatar at Animal Kingdom. Disney World contributed $5.6 million in cash to local causes last year, as well as $38 million of in-kind support.

The hits keep on coming for Williams and his team at Universal Orlando. Skull Island: Reign of Kong, a gargantuan thrill ride, opens this summer and is causing the most Universal buzz since The Wizarding World of Harry Potter opened in 2010. Also set to debut soon: the 1,000-room Lowes Sapphire Falls resort. Next year brings the Fast and Furious Supercharged ride as well as the Volcano Bay water park. Williams oversees Universal parks worldwide, including Singapore and Japan, which recently opened new coaster rides. And in California, the Harry Potter attraction debuted in April. His philanthrophic efforts include Give Kids the World, Shepherd’s Hope, and City Year, which provides dedicated academic and life coach mentors to students.

Aguel, head of the area’s tourism association since 2013, recently delivered more record-setting numbers: Orlando welcomed 66 million visitors in 2015, a jump of 3 million over the previous year and double what the region attracted 20 years ago. A marketing campaign in Brazil, Canada, Colombia and the U.K. was seen as a key in pushing the numbers up. Aguel was recently given a lifetime achievement award by the Hospitality Sales and Marketing Association International for his accomplishments in the tourism industry.

Beginning in 2013, Kelley was the steady acting head of the troubled Orlando-Orange County Expressway Authority while the agency was wracked by leadership disputes and investigations. Last year, she was unanimously selected to oversee the recast Central Florida Expressway Authority, its 109 miles of toll roads and $351 million in revenue. Kelley is in charge of the agency’s portion of the $1.6 billion Wekiva Parkway, due to open in January 2018. She is gathering community input for future multimodal transportation needs and establishing beltway customer discounts during I-4 construction.

6. Loreen Bobo
I-4 Ultimate Project Manager
The industrial engineer is heading up the massive transformation of the roadway we love to hate.

Keeping the I-4 Show on the Road 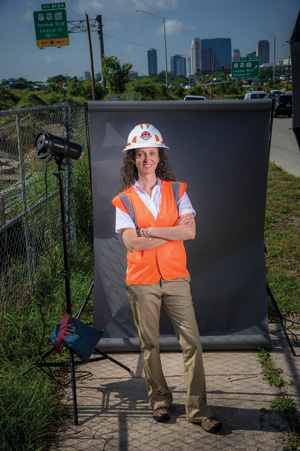 Loreen Bobo is a name you should know if you ever drive on Interstate 4 through downtown Orlando, which is ground zero for the increasingly jumbled $2.3 billion rebuild of Central Florida’s busiest road.

Bobo is an industrial engineer in charge of the I-4 Ultimate project that is more than doubling the width of the highway by adding four toll lanes down the middle of a 21-mile stretch, from Kirkman Road to State Road 434. Although an international consortium headed by Skanska USA actually is designing and conducting the most expensive public works project in Metro Orlando history, Bobo is the person who makes sure everything is done correctly and on time.

Employed by the state Department of Transportation for the past 17 years, Bobo is a married mother of two boys, ages 2 and 4, who leaves her Altamonte Springs home Monday through Friday and reports to work in a small corner office of a two-story, brick office building just off the Maitland I-4 exit.

She spends much of her time tackling the big problem(s) of the day, whether it’s complaints about noise from people living near the highway, another lane shift or some sort of arcane drainage issue.

“In construction, it’s like we have to solve this today,” she says.

Of course, her main job is staying on top of SGL Constructors, the building arm of I-4 Mobility Partners, the Skanska-led company that won the I-4 bid. Her office sits in the midst of assorted SGL managers and engineers.

Bobo says she never really considered working on the private side, where the pay often is better but the hours and jobs are less predictable. “I like working for the people and looking out for the public’s interest,” she says. “I feel like I’m making a difference.”

Bloodlines are partly responsible for her career choice. Her father is a retired hydraulic engineer who designed dams. “I was good at math and science classes,” she says. “I was a problem solver.”

Her father, she says, made it a point to be home with the family for dinner each night. She does the same with her boys and husband Brandon, a structural design engineer. But once her brood is off to bed, it’s not unusual for her to be writing reminders to herself in a black notebook on what lies ahead at work.

Noranne Downs, who runs FDOT in Central Florida, says Bobo has done a good job with I-4 Ultimate, scheduled for completion in 2021. Bobo was one of 22 engineers who put in for the top supervisory job. She was chosen from six finalists. “She rose to the top,” Downs says. “She’s very calm. I don’t think I’ve seen her get riled up on this project.”

Bill Jennings, who lives in College Park near I-4, says he has dealt with Bobo numerous times since work began nearly two years ago.

“She is aware that, as one FDOT engineer told me years ago, construction isn’t pretty,” says Jennings. “But she wants to work with the community to minimize the impact of the pile drivers, backhoes and clanging dump trucks for those of us who live next to the project.”

For nearly two decades, Maladecki has headed the lodging group whose membership covers about 80 percent of the more than 121,000 hotel rooms in Orange, Seminole and Osceola counties. Maladecki, representing his group and the local Big 3 theme parks, proposed in April that a bigger piece of the tourist tax revenue go to the arts (as well as tourism groups and projects), which drew a personal rebuke from Orange County Mayor Teresa Jacobs, who said the issue should be put before voters.