For so many years, Central Florida’s homeless situation seemed to have no measurable progress toward a solution. But last year Bailey and his team set out to identify homeless veterans and get them and other chronically homeless persons into permanent housing. A recent census revealed that homelessness had dropped a stunning 23 percent over the past year and 60 percent since 2013. A lot of the credit must go to Bailey, although he will be the first to tell you that it was a team effort by everyone from government officials to faith leaders—and grassroots volunteers. But Bailey, the Orlando Sentinel’s 2015 Central Floridian of the Year, announced in early June that he will leave at the end of the year to start an organization that takes the homelessness battle to the state and national level. His are some pretty big shoes to fill. Stay tuned.

2. Jim Pugh
Board Chairman of Dr. Phillips Center for the Performing Arts; Developer

Pugh is focused on growing the arts and culture. He’s working on raising the final $10 million needed to begin construction on the Dr. Phillips Center’s second phase, a 1,700-seat acoustic hall for ballet, opera and theater. The chairman and CEO of Epoch Residential, a nationwide multi-family homebuilder, Pugh has been a longtime patron of the arts and a Democratic fundraiser. He and his wife, Alexis, have been major donors to the University of Florida, and he serves on the board of the UF Foundation.

Arguably downtown’s most prominent power couple, Maines and Miller focus on social and political causes and then work to bring change in those areas, through volunteering and financial contributions. A major focus this year: getting Hillary Clinton elected president. They have held fund-raising events in their home the past year, with the beneficiaries ranging from Mayor Buddy Dyer’s re-election campaign to a Unitarian Church building project. Both are active in anti-bullying programs, and Miller, a longtime leader with the Holocaust Memorial Resource and Education Center, is involved in a study to determine whether the facility should be relocated from Maitland to downtown Orlando.

When it comes to community involvement, Linda Landman Gonzalez is a powerhouse. She oversees philanthropy and corporate giving for the Orlando Magic and fundraising for its youth foundation. Her three-pronged focus is on improving the availability and quality of early childhood education; fighting homelessness; and diversifying the arts. Earlier this year, she was given the Florida Diversity Council’s Multicultural Leadership Award. She is chairman of the Central Florida Commission on Homelessness and the Early Learning Coalition of Orange County. Landman Gonzalez serves on many civic boards, including the Dr. Phillips Center for the Performing Arts; United Way; United Arts; Florida Hospital for Children Foundation; and FAMU Law School.

6. David Swanson
Pastor, First Presbyterian Church of Orlando
The downtown clergyman is at the forefront of conversations about ending homelessness and fighting racism.

Practicing What He Preaches

By Mark I. Pinsky

David Swanson has heard all the old jibes about his denomination as the haven of affluent, white, community leaders—“the frozen chosen” and “the Chamber of Commerce at prayer.” But in recent years, the pastor of First Presbyterian Church of Orlando has done his best to turn that stereotype on its head, leading efforts to combat homelessness and confront racism. 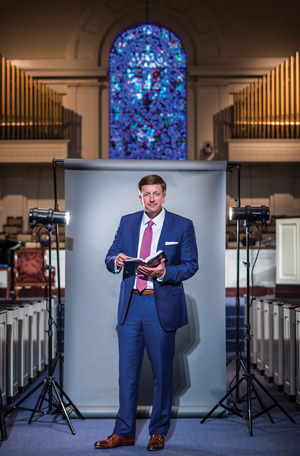 “David has been exemplary in leading his congregation to reduce the racial divide in our city, and he is our regional faith leader in combating chronic homelessness,” says the Rev. Joel Hunter of Longwood’s Northland, a Church Distributed.

When Swanson took the venerable pulpit in 2004, he had a number of challenges, including whittling down a crushing, multimillion-dollar debt, plummeting membership, and negotiating a split with the congregation’s liberal, mainline denomination, the Presbyterian Church, USA, over theological differences and the ordination of gay clergy.

On the plus side, the congregation was the beneficiary of a revived downtown. Gentrified neighborhoods like Thornton Park, as well as an explosion in condos and rental complexes, created an infusion of singles, active retirees and young families to fill his pews on Sundays and the church’s day school during the week.

But the Dallas native felt that something was missing, and what that was, he decided during a 2012 sabbatical, was a more active commitment to the social gospel. In particular, the downtown homeless, what he called the “breadth of human need at our doorstep. …God had uniquely placed us in the city center.”

Swanson was appointed to the board of the Central Florida Commission on Homelessness and then named chair of its Chronic Homelessness Subcommittee. He then spent 15 months chairing the Social Fabric Task Force that was part of Project DTO (Downtown Orlando), to develop a new vision and community plans for the city.

His approach, after much study, is to address what he calls systemic issues. “I want to help end homelessness as much as feed the homeless,” which means Orlando needs to build simple, affordable housing, surrounded by a variety of supporting services.

On the ground, and in the meantime, Swanson enlisted his church’s financial and volunteer support for homeless projects, including providing hot meals and counseling. And, to add symbolism to substance, he helped raise $60,000 for a copy of a cast iron sculpture called “The Homeless Jesus,” sleeping on a park bench on the street outside the church.

Making a major commitment to homelessness has led Swanson to the larger and even more challenging issue of racism. Since First Presbyterian has been “pretty lily white for a lot of years,” he says, “getting to know people who are different from us” is a priority. “White Americans tend to understand their experience as normative, and might not appreciate the experience that people have from other cultures.”

So, as an initial step, First Presbyterian has an African American “sister church,” Heart of Mercy Community Church. The Pine Hills congregation worships with the larger downtown church once a month.

At the heart of racism is the notion that “it’s not my problem,” Swanson told several hundred community leaders who gathered recently at the Northland church for a panel discussion about race. “That’s the challenge we have in white culture.”

For decades Batchelor has lent his name to numerous causes, especially those that help families in need. He has been active in the Orange County Domestic Violence and Child Abuse Commission, advocating changes in laws to protect domestic violence survivors. He also chairs the Family Homelessness Committee of the area’s Commission on Homelessness. Goals in the coming year include educating the community about the underfunded needs of children and getting a Clinton back in the White House. Batchelor serves on Hillary Clinton’s Florida Finance Committee.

If Ginsburg hadn’t been so busy making his fortune developing apartment complexes, then giving much of it away to worthy causes, he might have noticed the stand-up comedian option staring right at him all along. As it is, the Maitland businessman is frequently drafted as funnyman emcee at various Central Florida fund-raising fetes. His philanthropy is just as expansive as his personality. His family foundation donated $20 million toward building the 15-story Ginsburg Tower at Florida Hospital, and he received a papal medal for funding construction of Catholic and Jewish spiritual centers at UCF.

Although the city’s daily newspaper is shedding experienced staff rapidly, the watchdog remains—and is wide awake. Maxwell continues to keep politicians and government agencies on their toes with an in-your-face approach. In March he wrote a withering column about Visit Florida’s lack of transparency in how it spends taxpayer money. Two weeks later Gov. Rick Scott ordered an audit of the state tourism agency. Other issues Maxwell has drawn attention to include decriminalizing marijuana, later start times at high schools, and excessive incentives given to attract businesses to the area.