50 Most Powerful: Entertainment & The Arts

To measure the power of Phil Rawlins, consider this: At the end of May, Orlando City had three wins, three losses and seven draws. American sports fans don’t like ties, right? Don’t tell that to Lions fans. Because Rawlins has turned Orlando City into a phenomenon. And now the new women's team, the Orlando Pride, is generating excitement of its own. Rawlins seems to be everywhere—at games, at galas, at community awards ceremonies where he is often a recipient. His efforts have borne fruit: For the past two years, his club has filled Camping World Stadium with 60,000-plus fans for the season openers. Next year, Orlando City moves into its own stadium downtown, which had to be enlarged because of season ticket fever. Off the pitch, Rawlins and his wife, Kay, give back to the community in a variety of ways, including youth soccer clinics through the Orlando City Foundation. They also are heading up a task force to address homelessness among local youths.

The past year has been bumpy for Alex Martins and his rebuilding Orlando Magic. The team had a record of 35-47 last season—the fourth consecutive losing season—capped by the sudden resignation of Coach Scott Skiles. However, the quick hiring of former Indiana Pacers Coach Frank Vogel as Skiles' replacement has been hailed as a positive move, and the team has a substantial amount of cash to spend to land a big-name free agent player. On the community front, Martins continues to be a major force. As part of UCF’s efforts to privately raise $20 million for the school’s $60 million downtown campus project, the Orlando Magic Foundation donated $1.5 million. Martins and his wife also personally donated $100,000 to the school. He is the CEO of a Magic-related company behind the planned entertainment complex across from the Amway Center. Martins serves on the UCF Board of Trustees and has been active with the Central Florida Commission on Homelessness.

Ramsberger oversees what has unquestionably been the crown jewel of downtown since it opened 20 months ago. That would be the Dr. Phillips Center, the gorgeous venue that has hosted Broadway hits from Kinky Boots to Beautiful, and also boasts an award-winning school of the arts. The coming season's Broadway program promises to be even better, with stagings of Tony winners like The Curious Incident of the Dog in the Night-Time. The center and Ramsberger can point to nearly 1,500 paying members as evidence of huge community support, in addition to a healthy base of Broadway and jazz series subscribers. And some blockbuster donations have the center well on its way to adding a 1,700-seat acoustical theater. The Dr. Phillips Center also is working with community arts groups to stage its first Spanish-language play.

Community-involvement virtuoso Sibille Hart Pritchard was once presented with an antique iron, honoring her for “ironing out so many pressing problems.” A business consultant with Hart Communications whose problem-solving efforts have encompassed everything from I-Drive development to Eatonville improvements to endangered turtles, Pritchard recently added Orlando Ballet to her laundry list. She waded in midstream to clean house when the ambitious but cash-strapped company ran into a funding setback last winter, one that forced it to cancel two performances of The Nutcracker. Pritchard, a longtime ballet supporter, called on friends to muster donations to stop the bleeding; hired a national arts consultant for advice; replaced the entire board of directors; and installed a new executive director tasked with bringing the ballet back to black.

The Fine Art of Renewal

The Cornell Fine Arts Museum is in a great location, assuming what you’re after is a view of Lake Virginia and a great place to hide your priceless stash of Old Masters paintings. Which was pretty much how the Rollins College museum was operating when Ena Heller was hired as its director three years ago. 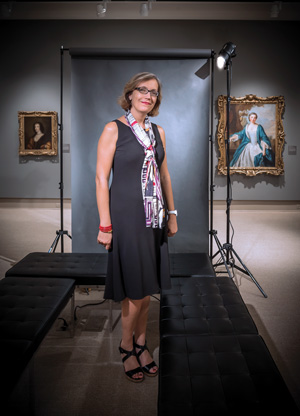 “The only thing that was on display from the collection when I got here was a collection of watch keys,” says Heller.

Frustrated by the museum’s insularity, the droll Romanian immigrant made a couple of user-friendly changes, doing away with the admission charge and planning engaging exhibits. Then Heller, who was once the manager of a biblical art museum in New York City, became the beneficiary of a godsend: a ready-made, cutting-edge contemporary art collection and a fabulous setting in which to display it.

Call it karma, synchronicity, good luck—or as they say in Romania, mult noroc. “I just call it my first-year bonus,” says Heller.

It's a bonus she's determined to take advantage of by combining it with an ambitious game plan of her own.

The aesthetic windfall materialized two years ago via The Alfond Inn, a $30 million boutique hotel that was being built just across Fairbanks Avenue from the campus. Owned by Rollins and funded in part by a foundation created by the late Harold Alfond, a former factory laborer who created the Dexter Shoe Co., all of the hotel’s profits are earmarked for scholarships.

Alfond’s son and daughter-in-law, Ted and Barbara Alfond, are both Rollins grads. Deciding the Alfond needed an art collection, they amassed one, then donated all of the contemporary paintings, photographs, sculptures, videos and mixed-media works to the Cornell so they could serve both Alfond guests and Rollins College art students. The collection of nearly 300 pieces includes the works of such contemporary artists as Carmen Herrera, who is 100 and still painting.

Guests and visitors of the hotel can enjoy the collection at their leisure or take advantage of what is surely the classiest happy hour in Central Florida: a free monthly tour that can include a glass of wine at a bargain price. Rollins art students have taken to calling the Alfond “the Whitney across the street”—a reference to the Whitney Museum of American Art in Manhattan.

Meanwhile, Heller has enlivened the Cornell, hiring a progressive new curator, Amy Galpin, and working with her to bring in exhibits such as photographer Jess Dugan’s intimate portraits of a transgender community and Laura Anderson Barbata’s multimedia work with sacred stilt-walkers from Trinidad, Mexico and Brooklyn. Attendance at the Cornell has doubled, and the museum has attracted national publicity from art critics thanks to its unique partnership with a high-end hotel.

Heller, who is charged with expanding the Alfond collection to make it even more representative of a broad array of cultural and artistic perspectives, is suddenly au courant as a museum director. Though she is grateful, she's also ambitious. She believes the Cornell itself needs more elbow room, and has long-term hopes of seeing it move from its digs on a Rollins dead-end street into a more accessible Winter Park location.

“There’s been a whole conversation and a new paradigm being discussed, nationally, about showing art in different ways, making it more a part of daily life, so that people can experience it with less trepidation,” she says.

Though the irrepressible fashionista’s failing health makes it unlikely that you’ll be seeing her at the ballet, the theater, or a gala nowadays, it’s quite likely that she helped pay for the event, the hall where it’s taking place, or both—and just as likely that she’s outfitted some of the ladies in attendance. Lake, 94, has been selling off her legendary wardrobe for the past two years, channeling proceeds to the cultural institutions and other charities that have benefited for decades from her unflagging largesse.