50 Most Powerful – Entertainment, Sports & the Arts

Ramsberger is a perennial figure on our most powerful list. But this year also finds the CEO on the verge of completing the brick-and-mortar phase of Dr. Phillips Center so that she can then give her undivided attention to the performances and educational outreach programs the center has become known for. As foreshadowed by a topping-out ceremony in March, the long-delayed, $237.5 million final phase of the center will be completed in 2020. Steinmetz Hall, a state-of-the-art 1,700-seat acoustic theater that can be converted for banquets and other uses, and a more intimate performing space called the Green Room will be added to the 2,700-seat Walt Disney Theater and the 300-seat Pugh Theater. It’s been a long wait for all of us, and longer still for Ramsberger, whose alpha-and-omega role in spearheading the center goes back nearly two decades-—from overseeing the development of its original feasibility study and conceiving its mission to fundraising and lobbying on its behalf, creating its organizational structure and strategic plan, then moving on to the construction and managerial stage. Through it all, she’s maintained a hard-charging presence and a dogged pursuit of the enterprise's purpose, as expressed in its motto: “Arts for Every Life.” Operating revenue is up 48 percent since the center opened in 2014. During that time it has hosted more than 1,600 performances attended by nearly 2 million guests, as well as drawing 450,000 young people with shows, programs, camps, classes and more. 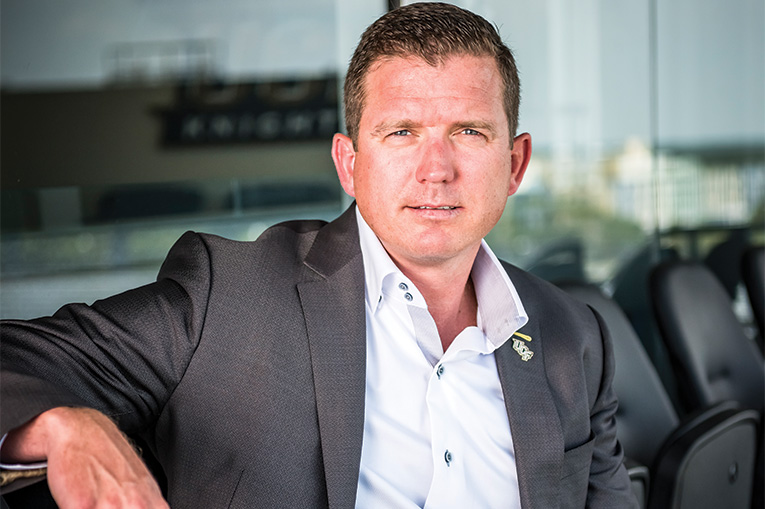 White and the UCF Knights sports programs are on a roll, big time. The football team, which finished an undefeated 13-0 in 2017-18, made its controversial claim to the national title and garnered national exposure. Last year, UCF went 12-1 after a heartbreaking 40-32 Fiesta Bowl loss to LSU in January, while missing injured starting quarterback McKenzie Milton. The men’s basketball team earned its first NCAA Tournament win in program history and was a missed tip-in away from upsetting powerhouse Duke at the buzzer, losing 77-76 in the second round of March Madness. Other UCF squads won American Athletic Conference titles in men’s soccer, women’s volleyball, women’s tennis and women’s rowing. The women’s basketball team also rolled up a record 26 wins in its runner-up title bid. White was named Under Armor A.D. of the Year by the National Association of Collegiate Directors of Athletics. He also was named to the Sports Business Journal’s Forty Under 40 again in 2018 and was a finalist for its Athletic Director of the Year. With new season ticket revenue significantly rising for football and basketball, cash donor gifts increasing and school athletes’ grade point averages above 3.0 for the 23rd straight semester, White and UCF look to be poised for more success—and their goal of competing for championships in all sports. 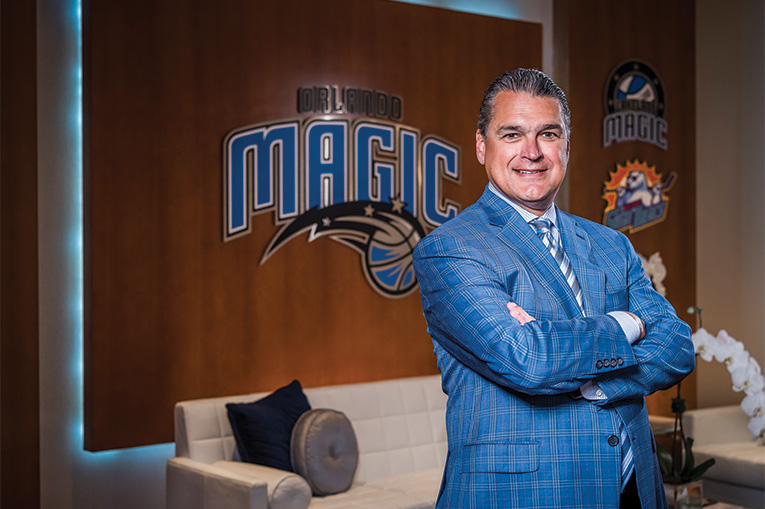 After years of languishing on the bottom rungs of the NBA, the hometown team pulled off a dazzling magic act: making the playoffs for the first time in seven seasons and winning 17 more games than the year before. The hiring of Steve Clifford as head coach made the difference, so Martins can take credit for that brilliant move via team president Jeff Weltman. Moreover, the Magic lasted five playoff games before falling to the eventual NBA champion Toronto Raptors. In the community, the Orlando Magic Youth Foundation last year distributed $1.2 million to 16 nonprofit groups in Central Florida. Still in the works is a $200 million-plus entertainment complex across from Amway Center that will feature a hotel, office building, residential tower, restaurants and bars. Despite numerous updates, construction is yet to begin. Outside of his Magic duties, Martins serves on the UCF Board of Trustees. 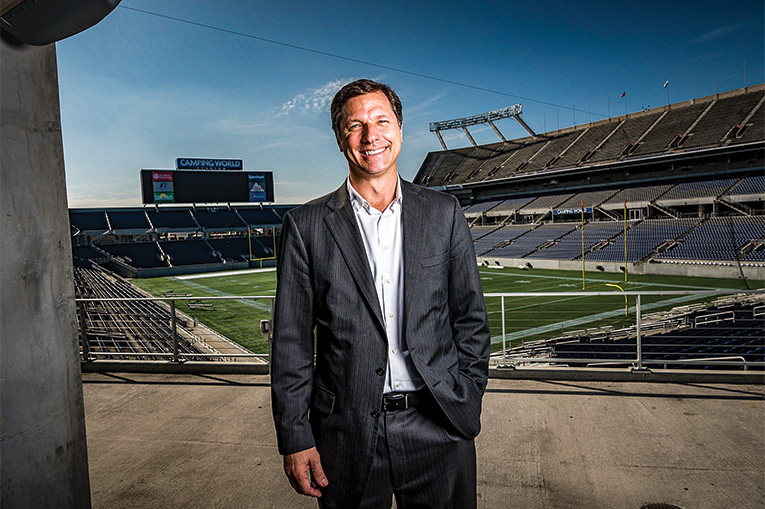 After another successful year at the helm of nonprofit Florida Citrus Sports, Hogan keeps building for the future. The Cure Bowl, Camping World Bowl and Citrus Bowl college football games, as well as a third straight NFL Pro Bowl kept sports fans frequenting Orlando. Coming up: The Florida Gators and Miami Hurricanes meet at Camping World Stadium on Aug. 24 for the College Football 150th Anniversary special kickoff celebration. Last fall, Hogan won $60 million in tourist development taxes to upgrade restrooms, seating and parking at the stadium. He says the refinements are necessary to stay competitive for top bowl games, concerts and a 2026 World Cup soccer bid. Hogan serves on the board of LIFT Orlando, which continues its new affordable housing construction strategy in the nearby West Lakes communities. It broke ground on a housing project for seniors, Pendana Phase II, and a state-of-the-art early learning center. 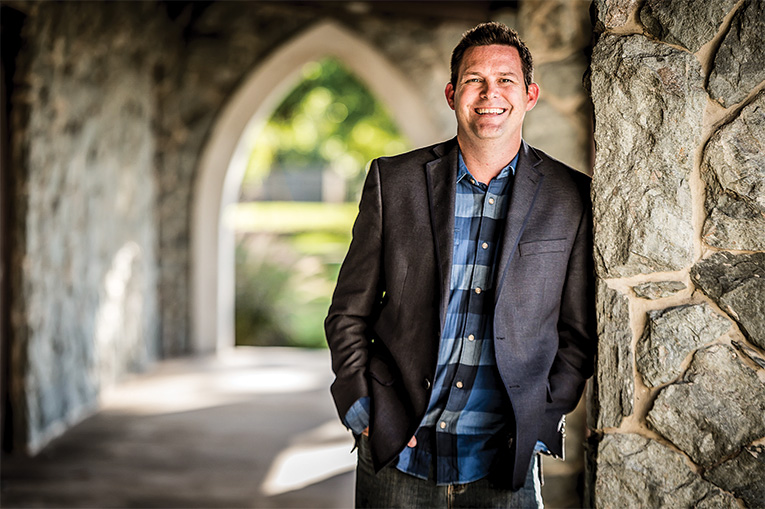 The multitalented Vickery—he’s a vocalist, actor, teacher, producer, musical director, arts administrator and conductor—saw continued success with his community-centric performing arts group, which he launched in 2010.  Last year, 2,177 of CFCArts' actors, dancers, instrumentalists and singers performed in 114 productions to a combined audience of more than 32,000. Its volunteers also performed at 103 community events and have donated more than 4,000 hours of service. One of CFCArts’ most intriguing programs: the Musical Minds Choir, in which seniors with memory loss, their caregivers and volunteers gather for the purpose of awakening memories and connecting through music. Vickery, who has pushed to restore state cuts in arts funding, says he wants to continue giving artists “a place to belong and succeed. We also want to see Central Florida continue to make the arts affordable and accessible to all as part of the quality of life." 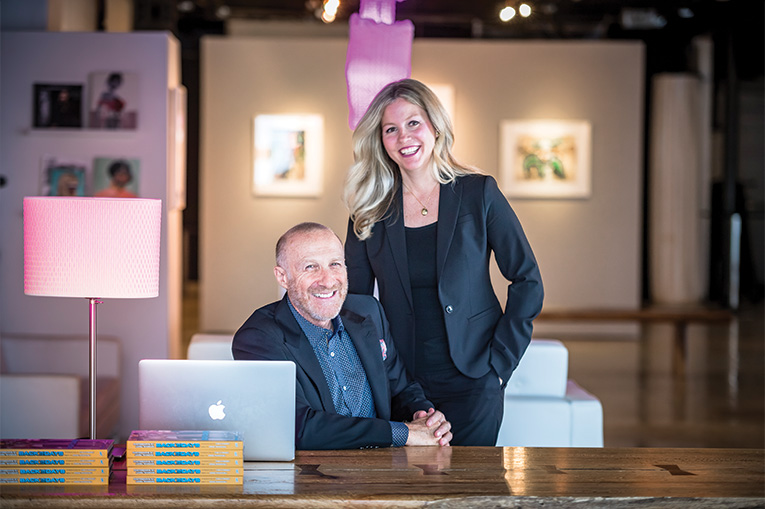 Pound for pound and square inch for square inch, Patrick and Holly Kahn’s nonprofit Snap! Space gallery is one of Orlando’s savviest, most engaging cultural initiatives. Five years ago, the couple, who moved to Orlando from Los Angeles, turned what was once a 1940s-era movie theater near Colonial Drive and Mills Avenue into a fashionable and impeccably curated showcase for national and international art photography. They added a downtown gallery on East Church Street in 2016. The couple often bring masters of the form to town, such as the hauntingly enigmatic, South African-based photographer Roger Ballen, in connection with exhibitions. This year’s shows included the works of Chuck Stewart, a jazz devotee who captured candid images of Louis Armstrong, Count Basie, John Coltrane, Ella Fitzgerald, and Miles Davis, and the quirky but telling ‘60s celebrity portraits of Duane Michals. The Kahns also launched Central Florida’s first art project featuring augmented reality last year. Their gallery openings have become a social-calendar highlight in the trendy Mills 50 district, where, not too long ago, one guest could be heard commenting to another: “I didn’t know there were this many beautiful people in Orlando.” Two of them own the gallery. 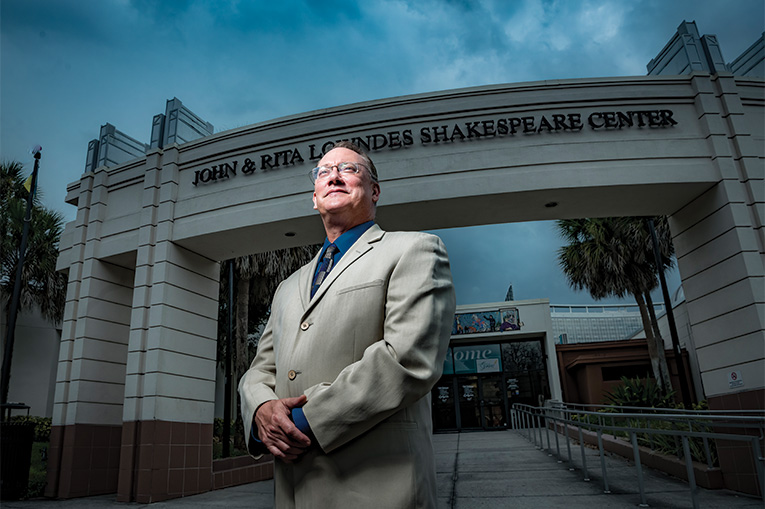 Helsinger’s expertise at operating behind the scenes isn’t restricted to the casting, directing, playwrighting, producing and fundraising required of him as artistic director of Orlando Shakes. He also oversees the comings and goings of kings, queens and knights as chess coach at Blankner Elementary School, which took first place in Orange County this past school year in K-2, K-4 and 5-8 categories. He orchestrated the “Angel Wings” demonstration, when volunteers in wings fashioned from sheets and PVC pipes took to the streets to protest the appearance of a hate group on the heels of the Pulse nightclub attack. And he’s earned the respect of fellow professional Shakespeare devotees, who presented him with the Shakespeare Theatre Association’s Sidney Berger Award for outstanding talent and dedication to the works of The Bard. In his 24 years of steering the Shakes, he has generated a consistent level of professionalism that regularly results in palpably inspired theatrical productions—the company’s rousing 2018 rendition of Lin-Manuel Miranda’s In the Heights comes to mind—despite recent dramatic cuts in state funding for the arts. 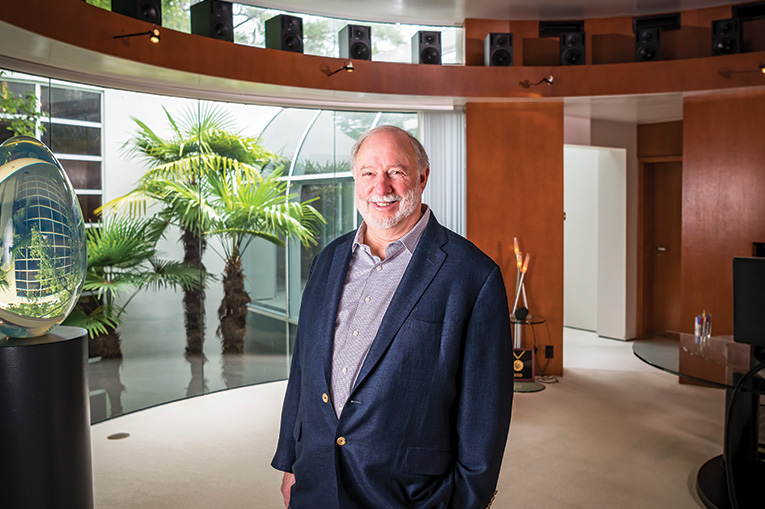 Goldman is an unusual combination, as arts supporters go: one part philanthropist, one part inventor. Fourteen years ago, the lifelong music lover and retired Winter Park computer-hardware entrepreneur created and funded an initiative on behalf of budding young composers: an annual “star search” competition to give talented students, ages 13 to 18, a chance to be recognized and hear their work played by a professional orchestra. The program, now called the National Young Composers Challenge, has evolved into a nationwide magnet for young musical talent. Every year, a panel of music professors judge roughly 100 submitted scores from across the country, selecting six winners who travel to Orlando to have their compositions discussed, performed and recorded by the Orlando Philharmonic.The spring event, which is held at the Dr. Phillips Center for the Performing Arts, is co-sponsored by the University of Central Florida, to which Goldman recently endowed $1.5 million to establish a chair for a professor of composition, in hopes that the Challenge will continue to encourage generations of young composers in perpetuity. 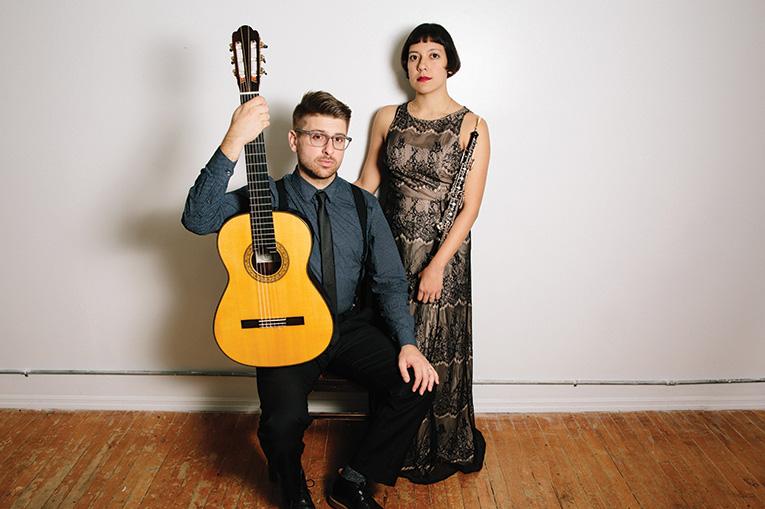 This power couple, newcomers to our list, lend their talents to the community as both musicians and arts administrators. For the past decade, Christopher Belt (guitarist) and Beatriz Ramirez-Belt (oboist) have championed the presentation of contemporary classical music, first through the Accidental Music Festival, then by creating the Alterity Chamber Orchestra, which they founded along with fellow musician Natalie Grata. Alterity focuses on the works of living composers; its concert last February at The Abbey drew a standing-room-only crowd. Meanwhile, Christopher oversees appearances by national and international artists at Benoit Glazer’s 100-seat Timucua White House, which presented 85 events in 2018, most of them free. And Beatriz manages a $1 million annual budget for Opera Orlando, which in three years has grown from three to six productions at local venues, including the Dr. Phillips Center for the Performing Arts.