In December, Florida Hospital’s Houmann was kicked upstairs to its corporate headquarters in Altamonte Springs. Splitting his old duties in half, he now oversees 26 hospitals statewide, which generate more than $6 billion in revenue. Daryl Tol took over Houmann’s previous job, running Florida Hospital’s nine Orlando-area medical facilities. A community leader in securing funding for SunRail and the battle to help and treat the chronically homeless and poor, Houmann was named the 2016 recipient of the James B. Greene Award, the highest honor bestowed by the Orlando Economic Development Commission. The award recognizes Houmann’s contributions to the economic prosperity of the region, including expansion projects at Florida Hospital Celebration Health and Florida Hospital for Women. Florida Hospital in Orlando has been named Florida’s top hospital since 2013 by U.S. News and World Report.

Thakkar oversees Tavistock acquisitions and operations, including the development of the Medical City and the nearby Lake Nona community. He is a board member of the Sanford Burnham medical research institute, which announced it is leaving Orlando but may be taken over by the University of Florida. Last year, Tavistock’s development arm was involved in $480 million of planned or completed projects, including opening the GuideWell UST Global Innovation Center, a healthcare and tech business incubator. It also began construction on the United States Tennis Association’s National Campus, a $100 million state-of-the-art training and tournament facility with 102 tennis courts and eventual home of UCF’s tennis teams. Orlando City Soccer Club also is planning to open a 23-acre training facility at Lake Nona.

For years the proposed downtown Creative Village has been a somewhat nebulous concept. But the approval of the downtown UCF-Valencia College campus suddenly gives true form to the dream, and Ustler is the point person for development of the high-tech mega-community. He's moving forward with the initial phase of a private development consisting of student housing and apartments, and his development partner, Bank of America, is set to create mixed-income housing. Meanwhile, Ustler has opened numerous ventures in the past year in the North Orange Avenue corridor, including Residence Inn by Marriott, the 800 North Orange office building and North Quarter Tavern restaurant, as well as Baoery Asian Gastropub in Thornton Park.

After the 2015 prescription drug overdose death of his 18-year-old daughter, Victoria, timeshare mogul Siegel has transformed his grief by fighting against heroin and drug addiction. While his timeshare business booms, he has relinquished management duties to meet with government and health officials around the country. Forbes has named him the richest person in Orlando with a net worth of $940 million, and his Westgate Resorts timeshare company is one of the largest resort developers in the U.S. Siegel also owns the Arena Football League's Orlando Predators, as well as the Cocoa Beach Pier.

5. Chuck Whittall
President, Unicorp National Developments Inc.
Hard work is at the center of the Winter Park native's success, with eye-catching attractions like the Orlando Eye.

Working His Way to Success

So, how do you go from mowing lawns in Winter Park to become one of the top developers in all of Metro Orlando? The short answer is: blood, sweat and tears, perseverance, an eye for opportunities, ambition, a dollop of decent timing… and more sweat. 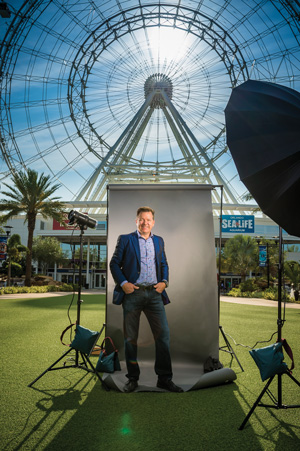 Charles “Chuck” Whittall is living one version of the American Dream, not precisely rags to riches but darn close.

Whittall, co-founder and CEO of Unicorp National Developments, has completed some of the area’s recent headline deals, such as bringing a Trader Joe’s to Winter Park and the 400-foot-tall Orlando Eye observation wheel and other attractions, shops and businesses to International Drive. But during the past two decades Orlando-based Unicorp has amassed an impressive list of commercial developments and is now on an even more blistering pace.

Some of the big Unicorp deals popping this summer include the opening of the Zen luxury spa at the Hyatt Regency Grand Cypress, $100 million of development in the Horizon West project in west Orange, closing on a 35-acre mixed-use development in Lake Mary, and prep work for more than $250 million worth of apartment development in various locations.

Les Goldberg, founder and CEO of LMG Inc. a pioneering audio-visual company in Orlando, is a longtime friend and neighbor of Whittall and says his reputation for demonstrating “relentless energy” is accurate. “He tackles enormous projects, sometimes going against the tide. He understands what it takes to get to the finish line.”

Whittall further cements his status as a leader with his recent induction into the tourism-based Dick Pope Legends Hall of Fame, alongside the likes of timeshare magnate David Siegel. He also is serving as 2017 chair of the annual Heart Ball fundraiser for the American Heart Association. “I’ve never lost anyone to heart disease, but it is the No. 1 killer,” he says. “I was asked [to head the fundraiser], and it’s a very worthwhile cause.”

Whittall grew up in Winter Park, the son of a firefighter, and learned about hard work and the value of a dollar from a young age. He cut grass for cash as a kid. His parents divorced when he was 12, and at age 18, Whittall says, his stepfather “told me to move out and go to work. So I did.”

He juggled different jobs, from disc jockey to drywall construction, pinched pennies and got his general contractor's license. That allowed him, in his early 20s, to begin building homes. Whittall found work in upscale communities such as Heathrow, where profits were high and reputations could be made. After a decade, in 1996, he had enough coin, contacts and experience to co-found Unicorp and seek out major multimillion-dollar projects. The company now employs about 500 people, including 23 in its Orlando headquarters off Sand Lake Road. This year, Unicorp celebrates its 20th anniversary and revenue is projected to top $200 million.

Whittall plans to celebrate by working.

“I love my work. I say it’s my hobby,” he says. But don’t feel too bad for him with that nose-to-the-grindstone thing. He enjoys traveling for fun every year and can afford to. This summer, in fact, he says he’s taking his wife of 28 years and their 14-year old daughter on a nice little vacation. To Hawaii. And Alaska. By way of Bora Bora.

Serving as CEO of Orlando-based CNL Financial Group, Sittema manages a company with more than $9 billion of assets in global real estate and alternate investments. In January, Sittema became chairman of the Investment Program Association, the national alternative investment industry’s leading trade group. He also founded and chairs the LIFT Orlando board of directors, dedicated to breaking the cycle of poverty by revitalizing neighborhoods. He is the past chair of the Orlando Economic Development Commission and is vice president of the Florida Citrus Sports executive committee. In December, Sittema was voted 2015 Entrepreneur of the Year by I-4 Business magazine for his work with LIFT.