A few months ago, Martins and  General Manager Rob Hennigan were under fire: The team, which had shown so much preseason promise with the addition of Coach Frank Vogel and big-name players Serge Ibaka and Bismack Biyombo, struggled to a 29-53 record, missing the playoffs for the fifth straight year. Martins immediately fired Hennigan and added Jeff Weltman from the Toronto Raptors as president of basketball operations; Weltman promptly hired John Hammond from the Milwaukee Bucks as the new GM. With both moves receiving rave reviews, hope has returned to the land of Magic. Other big milestones for Martins were the Magic’s acquisition of the Orlando Solar Bears franchise and the clearing of land for a $200 million sports and entertainment complex across from Amway Center. Martins was also a huge presence in  community service matters, chairing the OneOrlando Fund, which distributed $33 million to survivors of the Pulse nightclub mass shooting and the families of those who died.

Growing up in a poor neighborhood of Rio de Janeiro, da Silva didn’t have a soccer field to play on, so he played in the streets. In Orlando, he decided to build his own stadium—at a cost of $150 million and without public funding, virtually unheard of today. The 25,000-seat stadium opened in March and there's a long waiting list for season tickets. In April, the Orlando Pride, his pro women's team, landed Brazilian star Marta. Da Silva, a respected Brazilian education company owner and entrepreneur, took on more duties after the sudden departure of team co-founder Phil Rawlins, who had been the public face of Orlando City. The team dedicated 49 multicolored stadium seats to Pulse victims and gave $390,000 to the OneOrlando Fund.

The magnificent center continues to be the premier gathering place downtown, with Ramsberger overseeing the presentation of memorable Broadway touring shows and concerts, as well as various educational opportunities through the Dr. Phillips Center Florida Hospital School of the Arts. Groundbreaking for the long-awaited 1,700-seat Steinmetz Hall acoustical theater is cause for even more excitement. Ramsberger also led formation of a partnership with Jazz at Lincoln Center, which has generated two new school-based jazz programs.

Hogan had a banner year, landing the 2017 and 2018 NFL Pro Bowl, as well as Wrestlemania and the Atlantic Coast Conference football championship game (moved from North Carolina for 2016 because of its transgender “bathroom bill’’). Hogan also brought in a stadium sponsor, Camping World, resulting in the renaming of the newly renovated Citrus Bowl. This summer, the stadium will host the International Champions Cup, a soccer tournament featuring major European teams. Hogan recently received the Chairman's Award from the Orlando Economic Partnership. 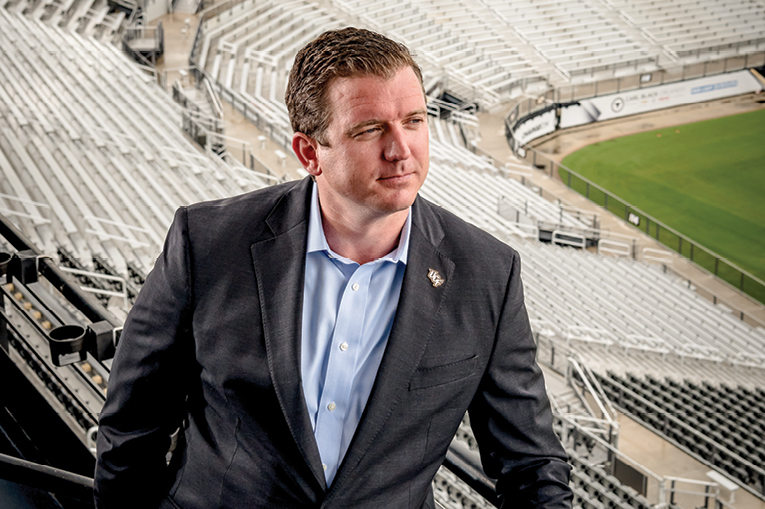 At long last, waking the sleeping giant that is UCF sports
By Peter Kerasotis

Barely 18 months since his hiring, Danny White has halted UCF's revolving door of athletic directors. At the same time, he is pushing the school forward to finally reach the elusive carrot that is UCF's potential. Long described as a sleeping giant, White contends that "the giant is awake; we're not sleeping anymore."

White, 37, has made significant head coaching hires, most notably offensive whiz Scott Frost for the Knights' football program and well-respected Johnny Dawkins for the men's basketball team. (The football team went from a winless season to a 6-7 record last year, while the basketball squad captured an NIT bid). He also has brought onboard Greg Lovelady with baseball, Katie Abrahamson-Henderson for women's basketball, Scott Calabrese for men's soccer, Bryan Koniecko for women's tennis and John Roddick as the director of tennis/men's tennis coach.

And that's only part of it. On the administrative side, White is building an impressive staff.
"He has surrounded himself with very talented people, a mixture of old and new," says Jason Siegel, the CEO and interim president of the Central Florida Sports Commission. "It's a very intelligent staff. You quickly see with Danny that he's innovative, thoughtful and smart."

White looks at UCF today and sees Florida and Florida State 30 years ago. He says that to get UCF to where the Gators and Seminoles are today is going to require "that we accelerate and grow quickly. There is so much potential. But it's not like you can sit around and wait for it to happen. There is a lot of work to do."

Part of that work is drawing alumni to the school, which has always been a challenge even though there are 150,000 in Central Florida. White, though, also wants to bring in the non-graduate. He sees UCF as a source of community pride rather than solely school pride, similar to what the Miami Hurricanes have accomplished with their South Florida fan base.

"We want to be an attractive option for folks who love sports, not just our alumni," White says. "We want to be a part of the fabric of living in Central Florida. For us to really be dominant and build one of the nation's most formidable athletic departments, which I believe we can do, we've got to get those folks to embrace us as well."

There is a revenue stream that comes with that, for sure. Most schools outsource things like outbound ticket sales, premium seat sales and sponsorship sales. Conversely, UCF has established in-house operations for those functions.
In recent years, UCF has done well in keeping pace with the competition in the never-ending race for better facilities and academic assistance for its athletes. But now White envisions a $25 million athletics village that will surround Spectrum Stadium and tap into Central Florida's year-round warm weather and theme park vibe. Thinking outside the brick-and-mortar box, White sees an Olympic village of sorts, complete with a lazy river leisure pool, miniature golf course, beach volleyball courts and other outdoor amenities that will attract recruits to an environment where not only are their athletic and academic needs met, but they also benefit from a place to relax, recover and forge friendships throughout the entire athletic community.

"Our goal is to have a unique student-athlete experience," White says. "We have so many ideas and we can't wait to get to them."

They are music to our ears. Central Florida Community Arts, started by Vickery five years ago, continues to thrive, giving individuals of any age or ability the chance to be part of an active performing arts group, whether singing or playing an orchestral instrument. CFCA partners with local nonprofits and charities, performing at their fundraisers for free—its 400-plus collection of voices stakes a claim as the largest community choir in the country. Vickery was named Arts Education Professional for 2016 by the Florida Alliance for Arts Education. He also organized the “Beautiful Together’’ tribute at the Dr. Phillips Center, a fundraiser that brought together more than 60 performing groups to honor victims of the Pulse shootings. In Orlando magazine’s Best of Orlando reader poll, CFCA has grabbed first place in the Performing Arts Group category for three years running. 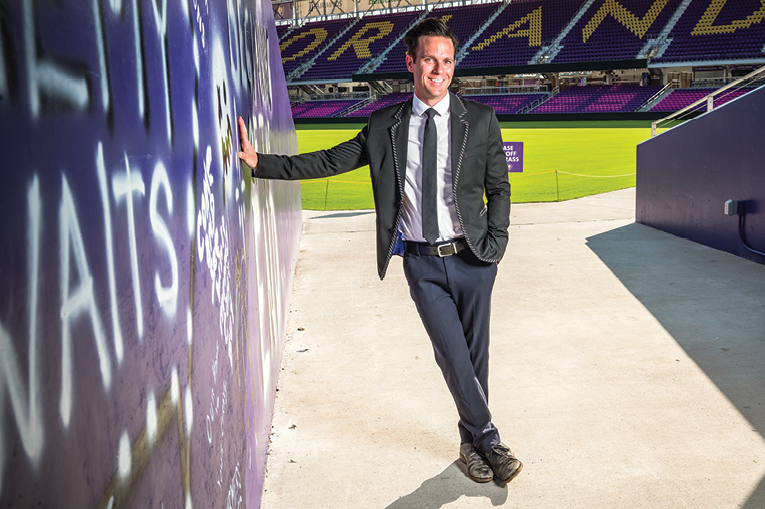 A few years ago, NeSmith visited Valencia, Spain, during Falles—an ancient, annual festival, one part Burning Man and one part Mardis Gras, that concludes with the midnight conflagration of fanciful effigies to celebrate the coming of spring. It left an impression and lit a fire in the think-big founder and executive director of the Creative City Project, a nonprofit enterprise that for the last five years has orchestrated an annual street festival in downtown Orlando featuring visual and performing artists. Recently rebranded as “Immerse,” the free October event drew roughly a thousand artists and 20,000 visitors last year. NeSmith hopes to bump those numbers up considerably this year—attractions will include a three-story plexiglass performance space in the middle of Orange Avenue and a dance troupe that performs on the sides of skyscrapers—and to eventually build up enough city, county, and private sponsorship to stage a multiday festival that will rival Art Basel in Miami and South by Southwest in Austin, Texas. 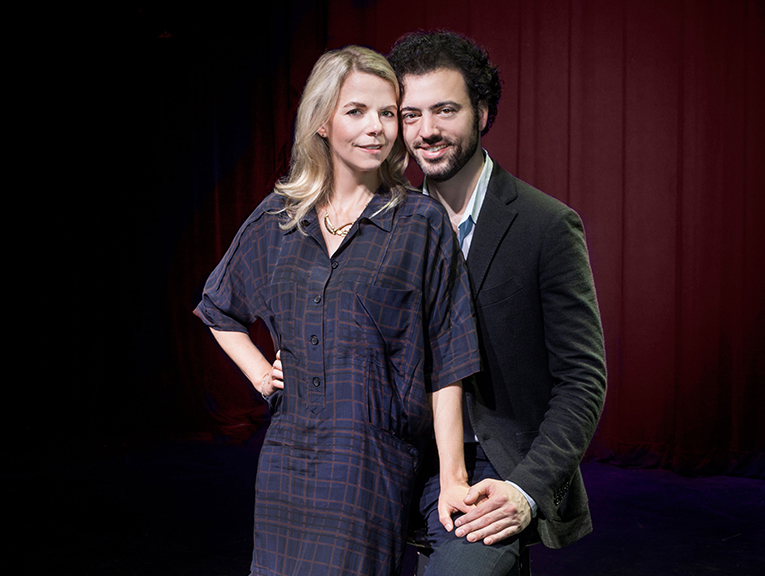 Last season, while rehearsing a demanding crescendo in Mahler’s Symphony No. 2,  Orlando Philharmonic tuba player Robert Carpenter sneaked a peek at his Fitbit. His pulse rate was up. No wonder: The orchestra’s new maestro was up on the podium in a cardiovascular frenzy of his own, entreating him and the other musicians for more. Carpenter’s personal uptick makes a good metaphor for how Eric Jacobsen’s presence registered on the city’s cultural constitution. The 35-year-old Long Island native emanates an unpretentious, boyish enthusiasm that should help the orchestra expand its customer base and jockey for position in a rapidly changing arts scene. It doesn’t hurt that he brings with him a wealth of experience, a global sensibility, and an array of connections to classical music luminaries such as fellow cellist Yo-Yo Ma, a guest artist this season. Jacobsen is married to folk singer, composer and recording artist Aoife O’Donovan (pronounced EE-fa). She performed with members of the orchestra in March.

There’s nothing new about OMA and the Mennello being neighbors. What’s different these days is their philosophical proximity, because they're directed by two people who share similarly progressive ideas. Shannon Fitzgerald came to Orlando from the Rochester, Minnesota, Arts Center two years ago to run the Mennello. Across Princeton Street is husband Glen Gentele, former director of the Oklahoma City Museum of Art, who arrived at OMA in 2013. Both are steering their museums on similar, sophisticated paths, emphasizing fresh sculptural works and contemporary art. Fitzgerald's most visible move was bringing two striking Alice Aycock sculptures to the Mennello’s lakeside grounds for an extended stay: “Waltzing Matilda” and “Twin Vortexes,” works that had been on display on Park Avenue in New York City. Gentele brought to OMA possibly the most ingeniously wrought sculptural exhibit in the city’s history, Maya Lin's “A History of Water.”