Celebrating the achievements of five new inductees into our Dining Hall of Fame. 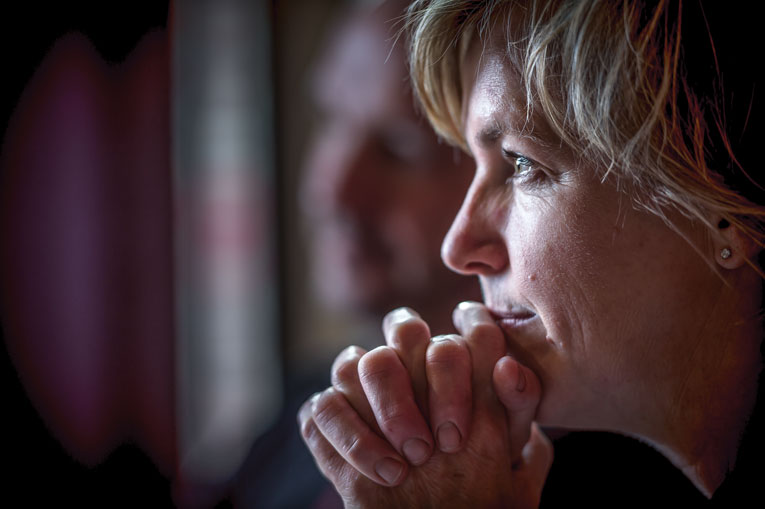 For this Church Street pioneer, the accolades keep coming

I first wrote about Kathleen Blake back when The Rusty Spoon opened in 2011, when a restaurant on Church Street was still an uncertain endeavor. Now, with downtown Orlando booming and crowds of arts and sports lovers returning, the bet has paid off.

Blake has been nominated for the coveted James Beard Foundation Best Chef: South award four times, and cooked in the minuscule kitchen of the James Beard House in New York with a celebrity team including Susan Feniger, Elizabeth Faulkner and Susan Spicer for a dinner titled “Pioneers and Legends.”

“I have developed this network of farmers,” she says, “a chain of Florida sources that I hope will help in keeping my community vital.”

Many of those sources are ones she had to discover herself when she first came to Florida in 2003 to open Melissa Kelly’s Primo restaurant at the JW Marriott.

“Coming from restaurants in California,” Blake says, “I had no idea that the growing season here was so different. It was like starting on another planet.” But her Midwestern upbringing and farm-to-table experience demanded that she seek out the freshest local products, and those demands put her at the forefront of a still growing movement.

The Rusty Spoon continues to evolve, looking at new sources and opportunities. A package evening with Mad Cow is in the works, and the restaurant held a special James Beard Foundation dinner in April.

Judging by her dedication, unique culinary talents, and the company she keeps, Kathleen Blake is, in no uncertain terms, a superstar.
therustyspoon.com —J.H. 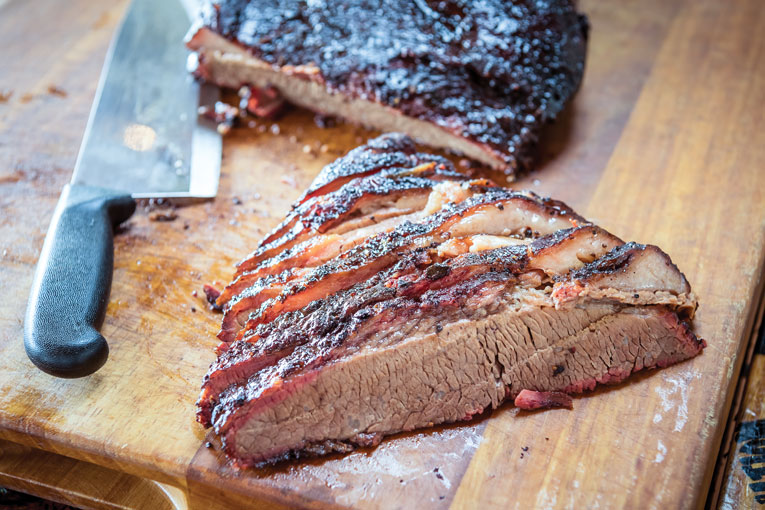 The Brisket at 4 Rivers Smokehouse

John Rivers, owner/chef/smoke maven of 4 Rivers, is a man dedicated to brisket. While smoked chicken, pulled pork, St. Louis ribs and achingly sweet cakes loom large in the Smokehouse pantheon, it is Texas-style smoked beef brisket that began Rivers’ journey from healthcare professional to restaurateur in 2009.

From his restaurant beginnings in a closet-sized former tire repair shop to what is now a 14-location multi-state empire, Rivers has scientifically examined the art of the brisket, running spreadsheets on rub, temperature and wood variations—and even after his success he is still tweaking. “I was just in another part of the country,” he says, “and had some brisket and, I have to say, it was so good it really upset me. We’re running tests right now to see how to improve ours.”

There’s an old-school charm about the meat; smoky, rich, with a magical pink ring directly below the charred surface. The signature brisket has made its way into a chargrilled burger and breakfast hash, but usually it is just sliced and served. There are no gimmicks (“My rub is a deep secret,” he laughs. “Half salt, half pepper.”) aside from time and quality. Angus beef of a specific grade, weight and fat content is secured from one producer in Iowa, aged for 30 days, then piled into the industrial smokers. After an 18-hour smoke, the beef is on the carving board, waiting for orders (an insider tip from smokemaster Rivers: brisket is best two hours later, after “the hold,” when the juices have rehydrated the meat).

Rivers had to educate his customers in the appreciation of brisket when he first started; the South is barbecue pork country. 4 Rivers is one of the largest sellers of brisket in the country now, with upward of 2 million pounds a year served to the company’s rabid fans. “What we’re doing is very expensive,” Rivers says. “This is pricey meat. But I will never compromise for a better cost.” 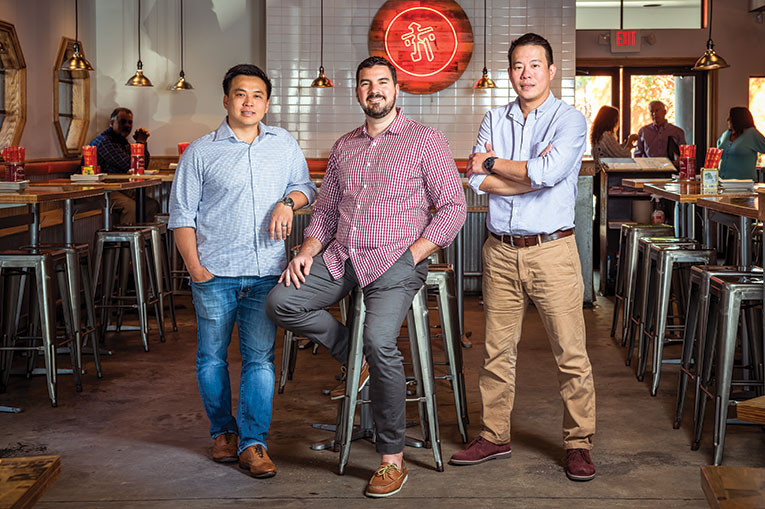 I will admit to a soft spot for Hawkers (the original location on Mills, not the new ones in Jacksonville and St. Pete). Not long after it opened in 2011, our kitchen at home was out of commission for several months, so for at least two meals a week, we were at Hawkers. It was close, open when we needed it, and the food was good, and over that span of time one gets to minutely inspect every aspect of a restaurant. I kept going back, and continue to, because Hawkers, throughout its permutations, adaptations and growing pains, continues to satisfy.

Opened by four diverse partners in 2011 to celebrate their family traditions, Hawkers takes the street foods of Vietnam, China, Malaysia and Hong Kong, and makes them, for lack of a better word, hip.

What is now taken for granted as contemporary fusion cuisine, the melding of diverse styles to make Chinese tacos or Vietnamese-influenced sushi, was still considered groundbreaking six years ago, and here was Hawkers putting chicken lo mein, Singaporean laksa and Thai papaya salad on the same menu. Street food like Yangzhou chow faan and Malaysian stir-fried hokkien mee needed some explanation to the general public, but ex-pats looking for a taste of home knew what Hawkers was all about.

And let’s talk about that laksa. A dish for a gray, windswept day, the bowl of curry spiced, fragrant soup, fatty with coconut milk, overflowing with noodles, shrimp, chicken and fried tofu, still remains my go-to Hawkers meal—when I can tear myself away from the deep flavors of very rich curry duck noodles. Even items that sound odd—curry mashed potatoes, for instance—become irresistible from this kitchen.

Hawkers, now in four locations with more on the way, deserves its expansive success.
eathawkers.com —J.H. 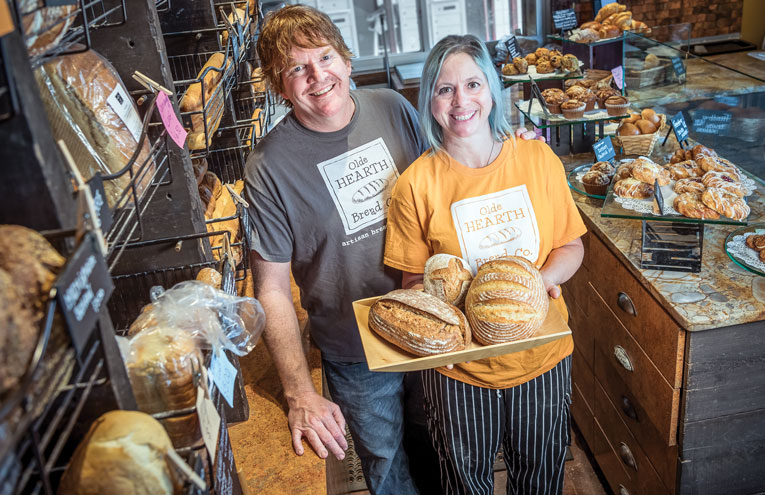 For foodies, a good chance their daily bread came from here

It’s almost certain that if you’ve been impressed by the quality of the bread in many of our fine restaurants, it probably came from Olde Hearth. That nori-enhanced sourdough at Flying Fish came from the ovens Shannon and Janice Talty tend every day; the beautifully flavorful mini-brioche served with happy hour sliders at The Rusty Spoon came right from the Olde Hearth bakery in Casselberry.

“Chefs motivate and challenge us,” Shannon says. “Along with the items we make every day, it’s fun to make things we normally don’t do.”

The Taltys take bread seriously and life a little less so. They show up at events like the micro-grant Orlando Soup gathering with enormous bottles of wine to share. They were married on a rolling pirate ship, in the desert, at the artistic self-expression festival called Burning Man. And after 19 years in business, to Shannon and Janice, baking is still a task to believe in.

“The scene has changed,” Shannon says. “We couldn’t be an ‘artisan’ baker when we started; there weren’t enough restaurants to support us. So we concentrated on doing the best job we could, with the best ingredients.” These days, bread is more valuable to our food-crazed populace, and the scene holds several competitors. There is only Olde Hearth to blame.

The breadth of Olde Hearth’s influence is remarkable, and has moved the bread horizon in all manner of places. Planet Hollywood Observatory, The Earl of Sandwich shop and Rick Bayless’ Frontera Cocina in Disney Springs all use the Taltys’ products. From Yellow Dog Eats in Windermere and Austin’s Coffee on Fairbanks, to Cafe d'Antonio in Celebration and Dexter’s in Lake Mary, people have become familiar with—nay, spoiled by—the taste, aroma and crumb of good bread.

“We still enjoy it every day,” says Janice Talty, and with a wistful smile she adds, “Just the smell of fresh bread…”
oldehearthbread.com —J.H. 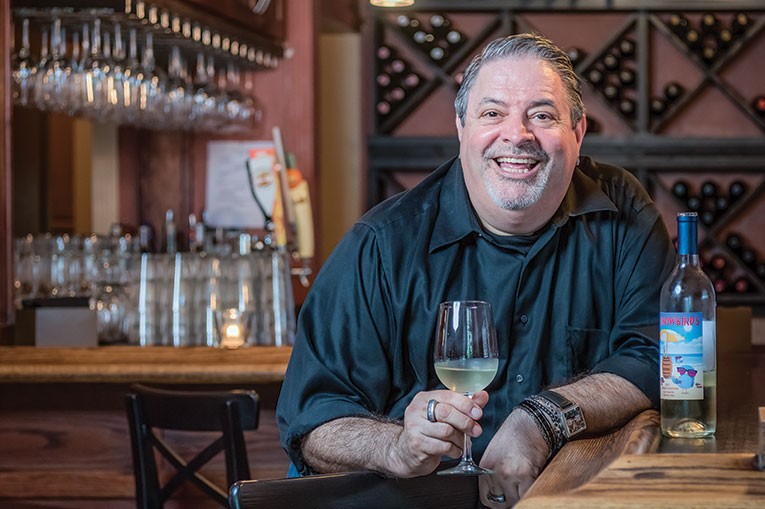 He is Orlando’s server extraordinare. 'K?

A fervent cadre of regular diners at K Restaurant in College Park make a point of asking to be served by Anthony Mazza. “Where’s Rocky?” they’ll ask, although it’s usually very evident when he’s in the house. His distinctive voice is hard to miss.

“I was talking in the airport in New York City,” the 60-year-old Mazza says. “And this woman spun around and said, ‘You’re that famous waiter.’ I told her, ‘Yes, I am.’”

Rocky, whose family comes from Calabria and Abruzzi, Italy, started in the food business when he was a 15-year-old dishwasher at an Orlando establishment called Yankee Lobster Pot. Stints at Mack Meiner’s Cafe Society Restaurant (busboy) and Steak 'n Shake  (server) led to a job as the youngest culinary waiter at the fabled Villa Nova, where he made Caesar salads and flambéed cherries jubilee at tableside. There was the Navy after high school, jobs in New York and San Francisco, all what he calls his “wild years” before a settling down—of sorts—as a costume-wearing, outrageous waiter at the casual but otherwise low-key Harvey’s Bistro downtown.

“I got up on the bar and danced in very high heels one night when Elton John was in town,” he says, his barking laugh filling the room. “The Harvey’s folks actually fired me three times, then begged me to come back three times when customers stopped coming.” The self-proclaimed “memory expert … I create memories” has been known to dress up as a Christmas tree and the Pope when the mood and opportunity strikes. “I get to know people. I usually only have 45 minutes to connect as much as I can.”

Things are a little more sedate at K, even with Rocky’s full-voiced repartee and occasional song. “I’ve known Kevin [Fonzo, the chef/owner] since 1988 at the B-Line Diner at the Peabody,” Rocky says. “But they don’t exactly cotton to the costumes here.” He still carries a couple in his car, just in case.

“I’ve led a very colorful life,” says Rocky, who has been writing a one-man show for 15 years. “This is me.”
krestaurant.net —J.H