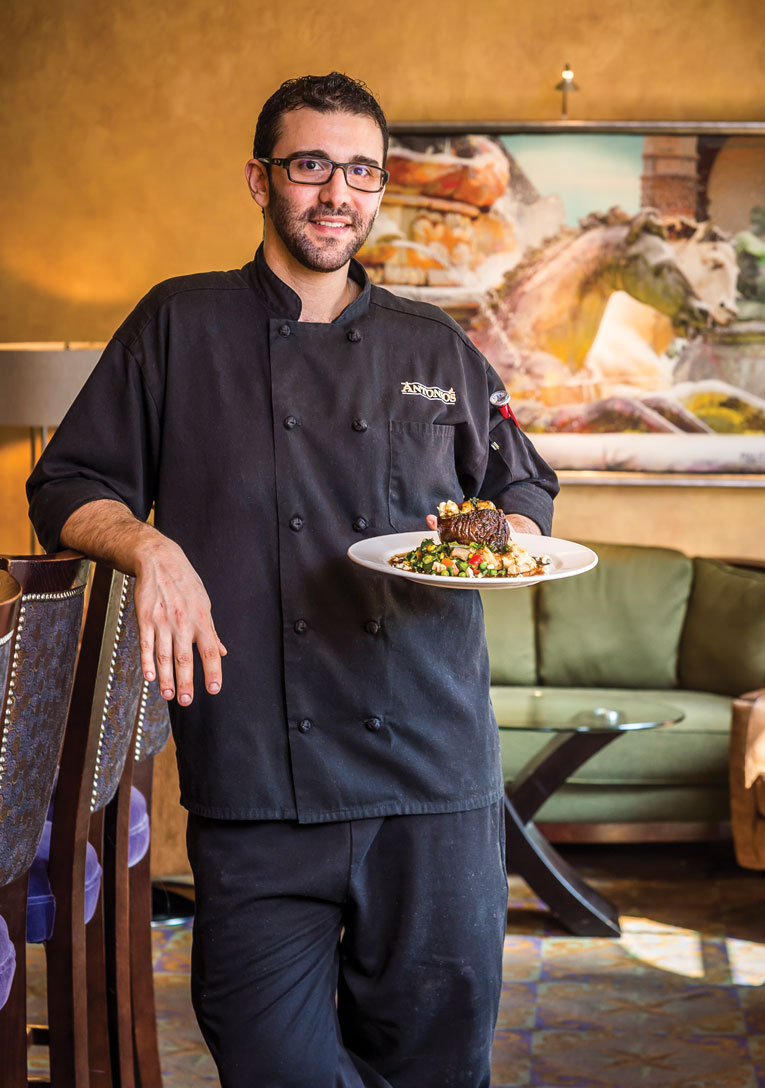 Antonio’s Chef Patrick Tramontana was rolling the dough before he was even born…kind of. At the time of his birth, his mother worked in a New York bakery. “Most of what I learned about cooking came from helping my mother in the kitchen,“ Patrick recalls. “That and from helping my older brothers.’’ By age 13 he was working full time in the family’s Long Island pizzeria. Already, his life’s path had taken shape.

Patrick credits Chef Alfredo Giulio for deciding to pursue his passion for food. Encouraged by Chef Giulio, Patrick attended culinary school and graduated from Le Cordon Bleu, and his talents flourished under several well-known chefs in Orlando. Patrick joined Antonio’s team and is in his fourth year as Executive Chef upstairs, furthering Antonio’s reputation as a local favorite for dining.

Antonio’s features fantastic seafood, steaks and Italian fare, and has been a fixture on Orlando’s culinary landscape for 25 years. Upstairs is casually elegant dining while downstairs is akin to dining inside an Italian market. If you’re on the run, you can enjoy Patrick’s creations from the grab-and-go section in the market. An Italian deli, liquor & wine store and many hard to find Italian products are available in the retail market.

Upstairs or down, you’re in for a treat at Antonio’s, a local favorite for 25 years! 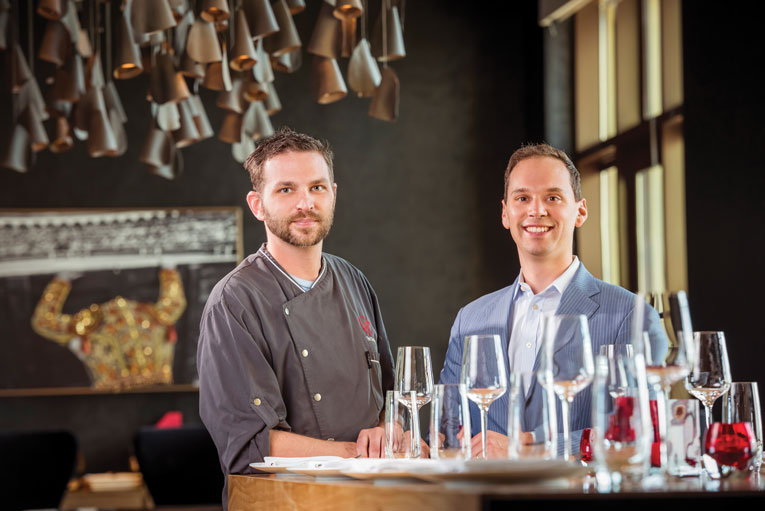 Let Capa take you from hand crafted cocktails, to gourmet tapas, to the main event.

Capa, the 17th floor rooftop steakhouse and bar at Four Seasons Resort Orlando, boasts the best of Spanish-influenced cuisine and prime meats in a dramatic setting like no other, and is proud to be named the Critic’s Choice award winner for Outstanding Steak and Outstanding Restaurant. The achievement is a testament to the incredible team who put the sizzle in the resort’s signature restaurant—including Chef Tim Dacey, who mastered his culinary skills at some of the nation’s best restaurants before returning to the Sunshine State.

Dacey, originally from the Tampa area, arrived to Four Seasons Resort Orlando by way of Reynard restaurant in Brooklyn, New York. Dacey’s culinary experience also includes stints at The Setai and The NoMad in Manhattan, and at Mercat a la Planxa and Spiaggia in Chicago. Before honing his skills at these swanky spots, Dacey learned from Four Seasons Resort Orlando Executive Chef Fabrizio Schenardi, when the two cooked alongside each other in 2004 at Pelagia Trattoria in Tampa.

Restaurant General Manager Josh Loving Aaronson spent two weeks in Spain prior to Capa’s opening, studying the Basque culture and cuisine and gaining inspiration for Capa. Fluent in Spanish, Aaronson also is a certified sommelier and the Resort’s Wine Director.

Capa provides a sophisticated dining option rich in flavor and ambiance. The talented team’s creations are sure to delight, and combined with the striking setting and impeccable guest service, dinner at Capa is an unforgettable experience. 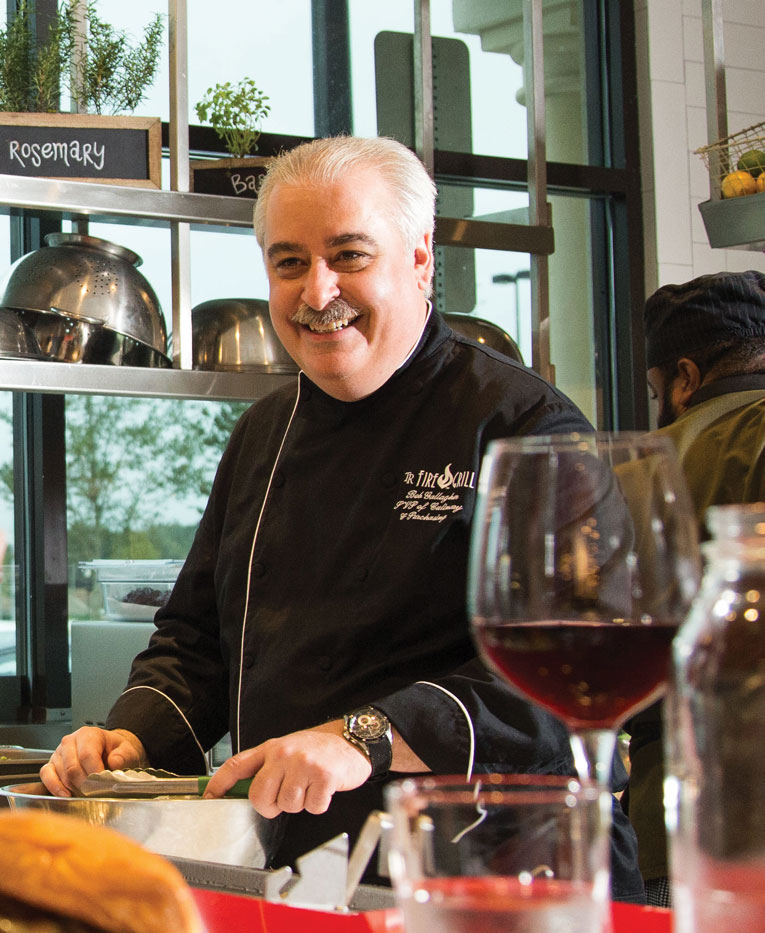 TR Fire Grill’s commitment to local sourcing extends to the bar, where guests can partake in “Local Hour” seven days a week and indulge in handcrafted cocktails made with spirits from Winter Park Distilling Company and the St. Augustine Distillery.

TR Fire Grill has already received much acclaim, including OpenTable Diners’ Choice awards for overall cuisine, ambiance, service and American food, as well as the title of “Best New Restaurant” from the Winter Park/Maitland Observer. Chef Gallagher was recently named to the Board of Directors of the Global Culinary Innovators Association, recognizing him as one of the leading culinary visionaries in the United States.

Guests can try Chef Gallagher’s artisanal dishes at dinner seven nights a week, or during weekday lunch or weekend brunch. 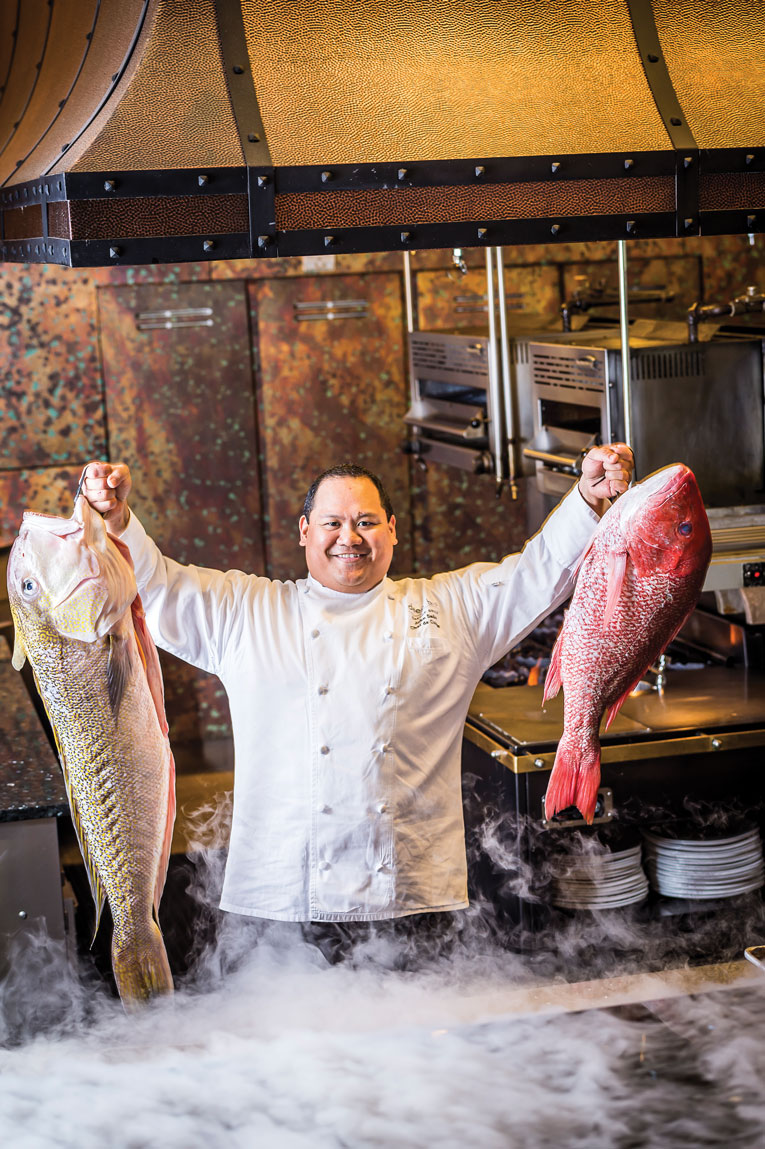 Dining at the deep blu seafood grille at Wyndham Grand Orlando Resort Bonnet
Creek brings you back to the days of exploration as diners will feel that they are in the Captain’s Quarters of a 16th century Spanish galleon. The culinary team, under the direction of Chef John Sadio, prides itself on serving fresh seafood from environmentally sustainable and local fisheries in the region. deep blu also serves a variety of land dishes including steaks, chops and salads. And from the Sushi Bar, traditional sushi rolls such as Spicy Tuna, California and Rainbow rolls are made fresh daily.

With more than 15 years of culinary experience and an eye for detail, Chef John Sadio has been a key figure in all culinary operations at the Wyndham Grand Orlando Resort Bonnet Creek since 2011.

Chef Sadio began his culinary adventure with The Art Institute of California in Los Angeles. After graduating, he expanded his resume in Las Vegas, Washington D.C. and finally, Florida where he was a part of the opening team for Wyndham Grand Orlando. He previously served as banquet chef, where he was responsible for all meeting and event cuisine and was showcased in Hotel F&B Magazine for the most innovative action stations.

Chef John Sadio provides the direction for the food and conceives the dishes for the menu, “the face, eyes, and palate” of the kitchen. Using his vast experience from all over the United States, he delivers astonishing tastes with locally grown and sustainable products that is unrivaled.

This article appears in the May 2016 issue of Orlando Magazine.
Categories: Culinary Spotlight