The upcoming 50th anniversary of Woodstock is the perfect time to take a road trip through the Catskill Mountains.

It’s hard to believe but the legendary Woodstock music festival, the symbol of a generation, is turning 50 this summer. Once again, there will be throngs of people and headliners will perform at commemorative events taking place August 16-18, in both Watkins Glen and Bethel, NY.

Yet, unlike that historic weekend of sex, drugs, and rock ‘n’ roll in 1969, this time around, since we have cell phones and GPS, the chances of a virtual standstill on upstate highways is unlikely. Plus, there’s sure to be much better crowd control and more toilets, and less drugs, nudity and general chaos.

The town of Woodstock was the area first considered to stage the concert. The event, however, was actually held on 600 acres belonging to dairy farmer Max Yasgur in Bethel, about an hour-and-a-half drive west of Woodstock. 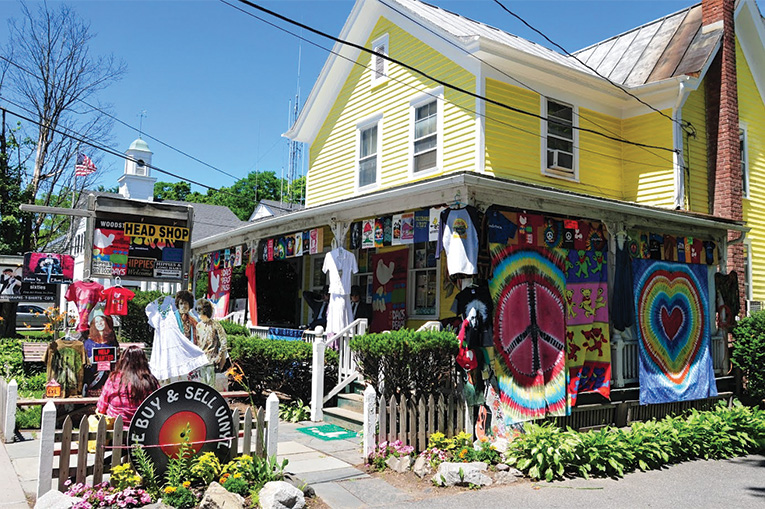 Whether you visit the area for the festival’s golden anniversary, or come another time for some R&R in the Catskill Mountains, this quiet corner of New York State is a veritable smorgasbord of food, fun, history and outdoor activities. You’ll find sleepy towns, quaint antique shops, and gorgeous vistas of cornfields, mountains and lakes.

You’ll need a set of wheels to explore. Fly into New York Stewart International Airport in Newburgh, and rent a car.

Head northeast on Route 9W and take in the beautiful views of the Hudson River and several historic homes open to the public. If you’re near Marlboro on a Sunday for brunch or evenings after 5, stop for a bite and some live music at The Falcon. The restaurant/performance venue will whet your musical appetite with their collection of rock and roll memorabilia. Or take the Thruway (I-87) to the college town of New Paltz and spend the day hiking in the Minnewaska State Park Preserve, with lakes, waterfalls and 50 miles of footpaths.

Continue north into the charming town of Woodstock, where many former hippies and flower children have settled, along with celebrities and retirees looking for a peaceful retreat from New York City, two hours south.

Stroll down Tinker Street where you’ll experience a blast from the past: touristy head shops and boutiques selling tie-dye T-shirts, peace sign candles, crystals and vintage clothing. There are also many upscale restaurants and art galleries.

Creativity abounds at the Woodstock Artists Association & Museum and The Center for Photography, which exhibits the works of local artists, keeping alive the spirit of the town’s once-thriving art colony. Grab a bench for great people-watching. Join in the community drum circle on Sunday afternoons during the summer when local musicians gather to play. Or score a deal at the weekly flea market.

Get an inexpensive breakfast burrito or kale and beet salad at Bread Alone Bakery. Then top it off at Peace Love & Cupcakes with “groovy” sweets named after famous Woodstock musicians including The Jimi Hendrix (triple shot espresso), The Janis Joplin (red velvet), and The Jerry Garcia (vegan banana).

Take some for the road as you head southwest toward Bethel. Driving along Route 28 to U.S. 209 and connecting to Route 17, you’ll pass dozens of tiny towns with delicious fare, farmers markets, prime fishing holes and whitewater rafting. 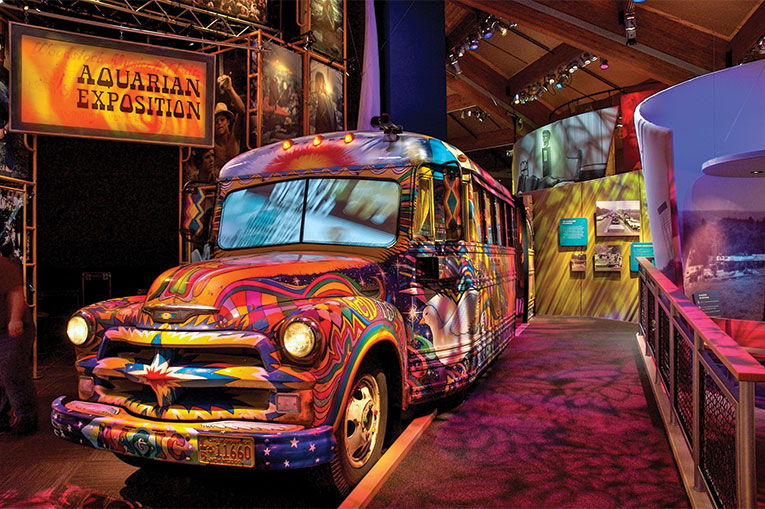 The highlight of your visit to Bethel Woods Center for the Arts is sure to be standing in the footprint of the concert stage, looking out on an expanse of green that was once packed with almost half a million people swaying to the music of a generation, and at the pond where concert-goers went skinny-dipping. Remember to take a selfie next to the monument noting all the music legends who performed on that memorable weekend.

The adjacent Museum at Bethel Woods will have you time-traveling back to the ‘60s. Sit in a psychedelic-painted bus and view footage of the original concert. Learn details of the festival, from the planning stages to its cultural impact, through music, videos and artifacts. You may even get a fascinating firsthand account from a tour guide.

There will be a series of outdoor concerts and events during this summer’s anniversary weekend, including performances by Ringo Starr, Arlo Guthrie, Carlos Santana, and The Doobie Brothers. Or visit the museum for a special exhibit, “We Are Golden: Reflections on the 50th Anniversary of the Woodstock Festival and Aspirations for a Peaceful Future.”

While amenities at the original festival were minimal to say the least (think mud-soaked sleeping bags on cold, wet ground), visitors today have a host of options to choose from. Charming B&Bs dot the roadways, plus there are historic inns, boutique hotels, and even glamping is available.

Feeling lucky? On the way back to the airport, stop by Kiamesha Lake to throw some dice at the new Resorts World Catskills casino resort on the site of the famed Concord Hotel. There is also a luxury hotel, spa, and plenty of restaurants. Right next door, kids will love the just-opened Kartrite, New York State’s largest indoor water park and hotel with waterslides, lazy rivers and wave riders.

And although you are not likely to be staying in a tent, lay a blanket on the grass one clear night and gaze at the star-filled sky and remember when man first walked on the moon—another historic event that also marked the summer of ‘69.

Bethel Woods
This Center for the Arts on the historic site of the 1969 festival will offer special concerts this August, plus it regularly has a full schedule of performances where you can sit outdoors and listen to music on the hallowed grounds. bethelwoodscenter.org

Washington’s HQ
Travel further back in time to our country’s founding by making a detour to this gem in Newburgh, NY. Tour guides will lead you through the history of the Revolutionary War and George Washington’s life with a treasure trove of artifacts. parks.ny.gov

Travel Info
Before you go, be sure to check out the events planned for Woodstock’s 50th anniversary celebration in the towns and communities in the area. orangetourism.org, ulstercountyalive.com, sullivancatskills.com

EDITOR’S NOTE: As of April 30, 2019, the festival in Watkins Glen celebrating the 50th anniversary of Woodstock has been canceled. However, the Woodstock festival in Bethel, NY, taking place Aug. 16-18, will go on as planned. Check the Bethel Woods Center for the Arts website for more info, bethelwoodscenter.org