A minister, a rabbi and an imam walk into a radio studio—and use humor to promote a better understanding of their faiths.

Mark I. Pinsky,
Through the studio glass, the three bantering wise guys—all middle-aged, middle-class suburban family men—appear the antithesis of drive-time, radio shock jocks. But the vibe is familiar: lots of laughs, repartee, high-fives across the table and, off-air, cutting loose with snatches of classic rock tunes. And the punch line is as much ecumenical understanding as it is humor.

These are the clergymen of Three Wise Guys: Friends Talking Faith on WMFE-FM  (90.7)—Muhammad Musri, 46, senior imam of the Islamic Society of Central Florida; Bryan Fulwider, 53, former senior minister of First Congregational Church of Winter Park; and Steven Engel, 55, senior rabbi of the Congregation of Reform Judaism. In the three years the show has been on the air, the trio have achieved the status of rock stars among WMFE’s audience, says Patrick Dalton, the station manager/program director—although a wise guy might observe that the competition for that title is not especially stiff.

Musri, Fulwider and Engel knew one another from more than a decade of interfaith community work, including joint speaking engagements, and often lunched together. In 2009, they were sitting around a table at Park Plaza Gardens in Winter Park, when Engel said, “We should take this to a wider audience.” The idea for a regular radio show followed, although it took a while to evolve. WMFE seemed the logical place to pitch it since, as Fulwider says, “We’re all big public radio listeners.”

“They’d done a lot of live events together, but they hadn’t done radio,” recalls Dalton. “What interested me was that the three would be getting together and discussing today’s events from their faiths’ perspective, and finding middle ground on the points that they could agree on, and disagree on. It really spoke to what we do in public radio—civil discourse, a conversation.”

Friends Talking Faith debuted in April 2011 as a one-hour monthly broadcast on Sunday evenings. Later, the on-air moderator was dropped, and in July 2013, Friends became a weekly 30-minute show airing at 6:30 p.m. on Tuesdays. The move doubled their audience, which is now “many thousands,” according to Dalton. 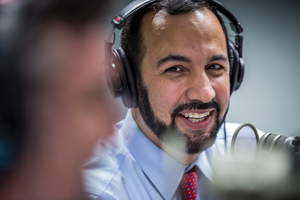 Most shows focus on a single topic, ranging from abortion and gun control to marriage and motherhood. Usually there are two main segments. In the first, each of the clergy explains his faith’s take on the subject. In the second, they talk about how their faith’s tradition might deal with the practical challenges of the issue. While the brief introductions to each segment are scripted by Fulwider, whose title is managing partner, the discussions that follow are spontaneous.

Often, the three illustrate their points with poignant anecdotes from their congregations and their pastoral experiences. Without pretense, they are apt to season their comments with words and phrases from their Scriptures in the original Hebrew, Greek and Arabic. They don’t hesitate to disagree, but always respectfully, on issues like prayer and divine intervention in human affairs. 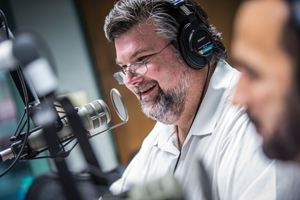 The show’s biggest challenge—embodied in the show’s two names, “Three Wise Guys” and “Friends Talking Faith”—is balancing the witty and the sedate, entertainment vs. enlightenment. “Humor, joy and laughter is also a part of faith,” Engel says, along with humility. “Our show deals with serious subjects with all of these elements thrown in.”

Or, as Fulwider puts it, “It helps not to take ourselves too seriously while taking the subject matter seriously.”

On a recent afternoon, the three are taping segments of several future shows, one called “Beginnings,” about birth rituals and celebrations. On the subject of Christian baptism, Fulwider explains the difference between sprinkling water and total immersion. “We don’t make them swim in our 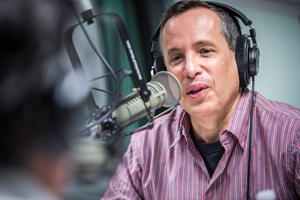 tradition,” he quips. Musri says it is customary for parents of a newborn to sacrifice a goat or a lamb, and serve it as part of a celebratory meal that includes the poor. Engel asks where in the suburbs one can find a place to locate and sacrifice an animal, and Musri ticks off several area slaughterhouses. Later, they will tape segments for the companion show, “Endings,” which deals with hospice care, “do not resuscitate” orders, funerals, memorial services and mourning.

There are occasional edgy features like “Bad Religion” and “Twisted Texts,” which examine religious excesses. These tend to focus on the more orthodox, fundamentalist and extreme areas of the hosts’ respective faith traditions. This is to be expected, given that each of them is schooled in the more liberal branches of their faith—Reform Judaism, mainline Protestantism and Sufi Islam. WMFE’s Dalton said he would like to see more theological and political diversity on the show—including evangelical guests who might challenge the centrist and liberal hosts—and Fulwider acknowledges that desire himself.

Sometimes guests appear live in the studio or by phone, but more often it’s just the trio themselves. Guests on the show tend to be women, a conscious effort, says Fulwider. “We don’t want it to seem that religion is a boy’s club.” There are exceptions. A favorite guest and, as Stephen Colbert might say, “a friend of the show,” is the Rev. Joel Hunter, pastor of Northland, a Church Distributed, in Longwood. “We consider him to be the fourth Wise Guy,” says Fulwider. “He’s been very influential on the show.”

Once a month, on a Sunday afternoon, the Wise Guys gather for a creative meeting to block out future shows. There is a free-flowing dynamic, and they try to balance serious topics, like homelessness and domestic violence, with lighter ones, like traffic etiquette and the possibility that angels might be extraterrestrial visitors.

From time to time the Wise Guys take their show on the road, doing it live before hundreds of people at venues like Engel’s synagogue, the Greater Orlando Chamber of Commerce, UCF and the WMFE auditorium, which drew hundreds. While these events, which feature questions from the audience, are not usually broadcast, one that was scheduled at Stetson University on April 9 was scheduled to be turned into two broadcasts.

Dalton says he hopes the show might one day reach a statewide or even a national audience. “The greatest attraction is that they have great sense of humor, they get along well. They have great chemistry.”

This article appears in the May 2014 issue of Orlando Magazine.
Categories: Art & Entertainment, Community