Today’s emergency rooms are prepared for the worst with advanced technology, procedures and training.

Most of the 75 beds in the emergency room at Orlando Regional Medical Center filled up quickly during the one-man terrorist attack at the Pulse nightclub on June 12th. Normally, those beds serve patients with vastly different injuries from simple bone breaks to far more severe compound fractures, as well as life-threatening heart attacks and strokes.

But, on that morning, everything normal was off the table, says Dr. David Cassidy, the assistant director/quality officer in the department of emergency medicine at ORMC, where first responders took almost all of the gunshot victims after the shooting rampage by Omar Mateen.

Although hospital staff is trained to be prepared for anything, Cassidy says, “Who would have thought there would be an attack one block away from our hospital?”

In terms of survival, the Orlando hospital’s proximity to the unfolding tragedy certainly played a role for many of those sustaining the worst injuries. But ORMC’s status in Florida as one of just 10 Level 1 trauma centers, where highly trained trauma teams provide round-the-clock medical care, also worked in victims’ favor.

So, too, did advances in emergency medicine over the past 15 years since the 9/11 terror attacks, from pre-training simulation drills in preparation for mass casualty events to technological advances that mean more accurate diagnoses and a better chance of saving those at life’s fragile edges.

Patients facing life-threatening bleeding from bullet wounds, for example, have much quicker access to blood transfusions and resuscitation than in the past, says Dr. Chadwick Smith, vice chairman in ORMC’s department of surgery and the trauma surgeon on call when the Pulse massacre occurred. From wars in the Middle East and elsewhere, he says, “we’ve learned patients bleed blood, not salt solutions,” so packed red blood cells are rapidly infused into the body to restore oxygen to vital organs and tissues, while other blood components improve clotting time to stem massive hemorrhaging.

“And, yes, we stockpile it,’’ Smith says, referring to an array of blood products, which the hospital stores in advance of emergencies, including, most recently, Hurricane Matthew as the storm raced up Florida’s coast.

Within the first 24 hours of the Pulse shooting, Smith says, the hospital used over 441 units of blood, a massive amount equivalent to the same number of pints, according to the National Brookhaven Laboratory on Long Island. The average patient purportedly requires about 4.5 units of blood after serious injury.

By the early morning hours of June 12, hospital officials say, 13 Pulse victims already had undergone surgery, while 15 more surgeries took place before the end of the day.Altogether, ORMC staff performed 76 operations—all but 9 of 44 patients surviving and released as of early September. Another 11 patients with less severe injuries were treated in the emergency department at Florida Hospital Orlando and released.

One Pulse survivor, Amanda Grau, sustained three “blows” or bullet wounds to her body during the shootout before hiding for more than three hours inside one of the club’s bathrooms, awaiting rescue. The worst injury, she says, was under her right arm, which bothers her even now, despite plastic surgery and two weeks of physical therapy near her Tampa home, after her release from ORMC. She also was hit in the right leg and in her back, though neither wound required surgery.

“I remember being on a stretcher, but I was in shock,” the 33-year-old Grau says, struggling to recall additional details of that Sunday morning. Beyond the physical injuries, she still struggles to overcome her fear of being in a crowded area: “A lot of things come back, especially at night,’’ she says, the pain still etched in her voice.

Grau, of course, doesn’t remember whether she had ultrasound to assess the extent of her injuries the night of the shooting. But advances in ultrasound technology, which use high-frequency sound waves instead of radiation to generate structural images inside the body, are enabling physicians to evaluate patients’ injuries rapidly, when seconds count.

Far more mobile than in the past, ultrasound machines “see” inside the belly to detect bleeding or quickly determine whether a patient’s lungs have collapsed, as well as provide continuous reassessment of patients’ medical conditions, among other uses. 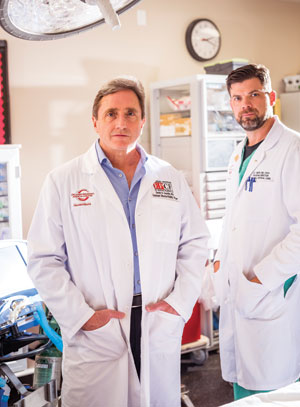 Image resolution is far sharper today, Cassidy says. And emergency physicians no longer wait for ultrasound technicians to read and interpret images as they have in the past because “by then, it was often too late.” Residents in emergency medicine now routinely undergo training in ultrasound assessments, he says.

On the night of the Pulse attack, doctors did use ultrasound, along with CT scans and X-rays, although mostly they relied on what Smith describes as the “general principles of patient care”—hands-on examinations to look for injury patterns, the extent of those injuries and patients’ level of alertness. Many went straight to the operating room to attend to the most visible wounds immediately, he says.

Whatever the response, however, “none was accidental, but came out of years and years of training,” according to Smith. “Many people went beyond their jobs that night,” he says, “but trauma care is expensive, takes commitment and a real sense of purpose to be ready for whatever happens.”

In 2015, ORMC had 81,151 visits to its emergency department. Of these, roughly 4,800 were trauma patients, with only a small fraction of that number related to gunshot wounds, hospital officials say. The top complaints were chest and back pains, headaches and leg or arm pain.

Although training in emergency medicine includes preparing for worst-case scenarios, such as Pulse, it also means training for other emergencies, where life can hang by a thread. At trauma centers like ORMC, surgeons refer to the “golden hour,” the window of time in which survival is thought to be best, following a traumatic injury.

But time plays a vital role, by definition, in any emergency, including heart attacks or strokes. And even hospital design reflects the need to distinguish quickly between those patients requiring immediate medical care to survive and those who can safely wait.

At Florida Hospital, as at ORMC, a system of triage whose concept has changed little over the years dictates which patients will be bumped to the front of the line.

“All of our ERs are designed where patients can be seen with low acuity and fast-tracked for high acuity,” says Debbie Pusateri, vice president of emergency medicine at Florida Hospital. “A patient who comes in with chest pains will get an EKG [electrocardiogram] within 5 minutes” to test for electrical problems in the heart, she says, or a rapid blood test that measures troponin, a protein marker for a heart attack.

Although Florida Hospital is not a trauma facility, the hospital system sees an estimated 550,000 ER patients a year across its nine campuses, including several freestanding facilities. Most of the cases are “not the most acute, but right in the middle,” Pusateri says, citing abdominal pain and back pain as the most common reasons for ER visits.

She describes emergency departments today as “diagnostic epicenters” in which medical staff see “everything from A to Z, because you’re taking care of every age, every condition.” That means medical staff must keep up with the best practices in clinical care or evidence-based medicine across many medical specialties, she says. 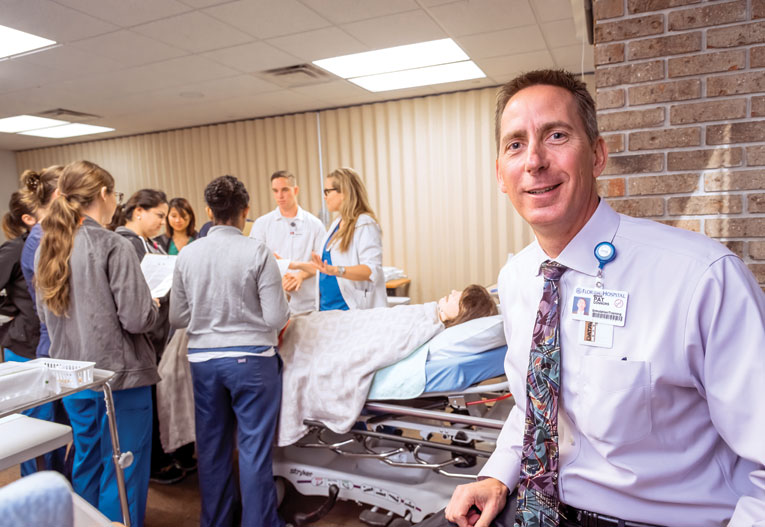 Simulation training, developed by the military, is one technology that is contributing to best practices in the civilian setting, experts say. Nurses, doctors and medical students at both Florida Hospital and ORMC use simulation techniques to better prepare for high-risk scenarios, such as stabbings and gunshot wounds or breech births where babies’ positions threaten their well-being and that of the mother.

“The idea being—we can do these simulations and replicate them in a safe learning environment,” says Patrick Connors, chief of simulation development and technologies at Florida Hospital. “A lot of what we do is teach the recognition of something and how to treat it.”

That includes infectious diseases, such as the Ebola virus, and the screening and isolation protocols needed to control further spread. Or “mock code blues,” where small medical teams take turns doing chest compressions in CPR training to revive a non-responsive patient.

“Recently, we even had a stabbing scenario with a knife embedded in a mannequin,” Connors says, requiring not only entry and exit wounds, but considerable makeup skills. The wounds were airbrushed onto the mannequin, one of a family of these life-size learning tools housed by Florida Hospital in five different labs.

Not only do the mannequins vary in stature from adult men and women to children and even premature infants, Connors says, they carry dramatically different price tags, depending on what they can do. The price range goes from as little as $10,000, upward to $120,000.

Top-of the line mannequins even sweat, he says, or their pupils dilate, mimicking real-life humans. “And every time there’s an interaction [medically], as the pulse goes up and down, it’s recorded,” Connors says, while the educator walks through the reactions for those under training.

The healthcare industry has been slow to adopt simulation technology, compared with the military, says Connors, a retired Army colonel who served in both Operation Desert Storm and Operation Iraqi Freedom. The reasons, he suggests, are primarily cultural given the constant medical needs on the battlefield’s front lines. But that’s beginning to change.

“Those in the medical field are starting to realize in order to change patient outcomes” and improve them, he says, simulation technologies offer a way for providers to learn, practice and refine their skills—essentially a dry run—before applying them in high-stress, real-life situations.