They only come out on weekends. And when they do, you can’t help but gawk.

Call them classics, hobby cars or midlife crisis-mobiles: There are almost as many of them in the Sunshine State as there are retirees. Their owners meet, join car clubs and show off their babies—a family heirloom, a treasured rarity or just a beloved reminder of high school motor lust.

Shows and “cruise-ins” are a weekend staple from Kissimmee’s Old Town to Winter Park, where more than 200 British classics are expected April 6 at the 29th All British Car Show in Mead Garden. Winter Park also is the site of the Concours d’Elegance each November along Park Avenue.

These events draw enthusiasts like Mark Braunstein, who never forgot his first ride in a Morgan, a famous and rare British sports car. A friend of his dad gave young Mark a ride on the autobahn while the family was stationed in Germany and, he says, “we went so fast, the rear seats blew out!” Braunstein, 56, has five Morgans now, “all of which have their own little problems.”

Jeanne Kilgore wanted a Chevelle in high school and spent two years restoring her ’69 SS, which she shows off at meets such as a recent one at Oviedo Marketplace. She’s named it “Miss Jenny” and plans to pass it on to her daughter, Jennifer.
Classic cars are “all works in progress,” says Rick Brown, 52, who brings his 1959 MGA to meets. Most people who own such cars aren’t high-end collectors like those who spend the big bucks at such events as the annual Mecum Auction in Kissimmee. They’re working folks who want to own something unique, maybe hand-built and certainly pre-plastic, when cars were made of steel, leather and wood.

“They’re not an investment. I always buy high and sell low,” jokes Rick Frazee, 65, a Morgan enthusiast and president of Central Florida’s All British Car Club. But be they old imports or American classics, “they’re simpler, easier to work on” than newer rides.

In a world of cookie-cutter Corollas and Cubes, they stand out. Brenda Brown, 55, bought and restored an ex-boyfriend’s 1967 Pontiac Le Mans GTO.

“You used to see GTOs and Camaros, and they had presence,” she says. “People see this and go ‘Whoa.’ ”

But because “classic’’ is defined as any car over 20 years old, and “antique” is anything over 45, there’s a sea change happening in the hobby. As the years pass and those who treasured such cars as Packards or Studebakers die off, “antiques” become ancient and rare. The 1950s T-Birds and Bel Airs have slipped out of the collectible fast lane as their owners age out of the hobby and younger collectors show less interest in those models. Right now, the muscle cars—45-year-old GTOs, Mustangs, Camaros and Challengers coveted by baby boomers—are peaking, notes David Wallens, editorial director of Classic Motorsports Magazine in Daytona Beach.

“Young retirees” are buying these cars, says Mike Gendreau, who runs the classic dealership Vantage Sports Cars in College Park, selling everything from Trans Ams to Triumphs. For baby boomers, “It’s their turn. They have a window of about 10 years where they can get into and then back out of these cars,” he says.

Fans buy a car, join a local club—the Antique Automobile Club of America (AACA) has a strong presence in Florida—and socialize and participate in group drives. 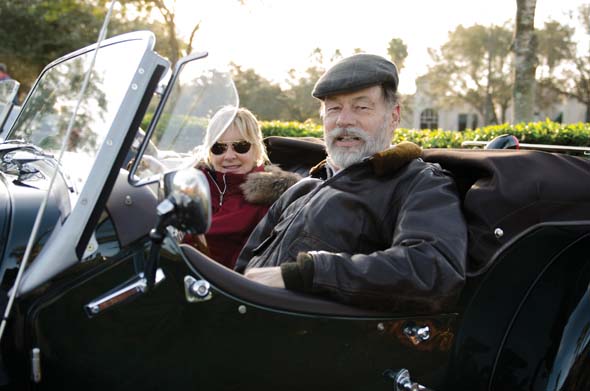 The new collectors “have the money but not the time to tinker with them, work on them,” says vintage Jaguar buff Pete Betterman, 72. Tinkering is part of the appeal, and it grows more essential as the number of mechanics used to dealing with carburetors, vintage brakes and transmissions shrinks.

And what happens when that window closes on a brand, or “marque,” of car that is no longer around, that has no emotional connection to the next generation of enthusiasts? They disappear, seen at only the biggest and rarest car shows.
Brenda Brown says she still gets mad “every time I think about General Motors killing off Pontiac." The brand was eliminated after 84 years, in 2010, along with Oldsmobile. There used to be a local club, “just for GTO owners,” Brown recalls. Now, there’s just the Widetrack Warriors, who welcome all remaining Pontiacs.

“It’s hard to attract younger people,” says Don Allen, a '55 Chevy owner and member of Florida’s AACA chapter. “They’re interested in a different type of car,” forming clubs around hopped-up Scions and the like. “But classic car collectors are interested in authenticity. Younger car buffs these days are more into street rods, modified vehicles.”

The problem is particularly acute for auto-Anglophiles. Most British car makers went belly-up in the 1980s. Popular Triumph and MGB two-seat roadsters and sport coupes went the way of Austin-Healey, Jensen and others before them. And as British car buffs age, mechanics who work on them retire and clubs go away. The Central Florida Triumph Registry gave up the ghost a few years back.

“That's definitely a graying market, but it's a loyal one,” says Wallens.

To fight that image of tail lights fading off into history, the big national classic car insurer, Hagerty’s, has been pushing youth-friendly events at car shows in which it participates. Braunstein is behind an All British Car Club effort aimed at a new generation of fans. He’s rounding up kid-friendly cars that won’t have “Do Not Touch” signs in the windows, items for a classic car scavenger hunt and British car coloring books for the club’s April 6th show, hoping to draw kids and their parents (more information is at allbritishcarclub.com). 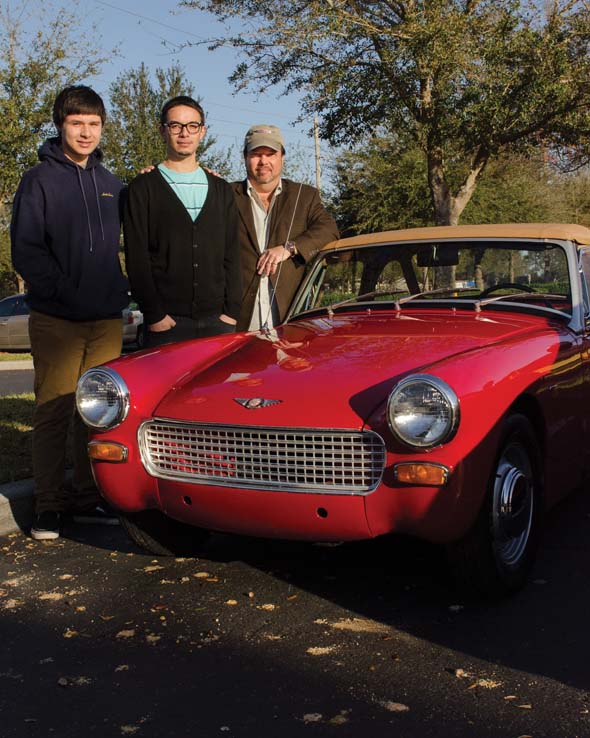 Clubs like the All British stress how affordable the hobby is (MGB "project cars" turn up for under $1,000 on Orlando Craigslist, drivable ones as low as $4,000), how easy the cars are to fix and how much fun they can be as family bonding experiences. Thursby Pierce, 52, has a 1969 Austin-Healey Sprite, a ’76 Mercedes SLC and a disassembled ’79 MGB project car. And it’s that last one that is having the desired impact. Pierce's three sons have become classic car buffs just like him.

“There’s so much character to them,” says s16-year-old son Aaron. “They’re pretty cheap; you can learn a lot from working on them. And they still look pretty cool on the road.”

This article appears in the April 2013 issue of Orlando Magazine.
Categories: Community