Before theme parks took over, tourists flocked to Florida for tropical beauty, small towns, unique wildlife, clear springs, and to get a glimpse of the final frontier: space travel. Don’t miss these “Old Florida” attractions beyond Orlando that have been drawing visitors for decades. 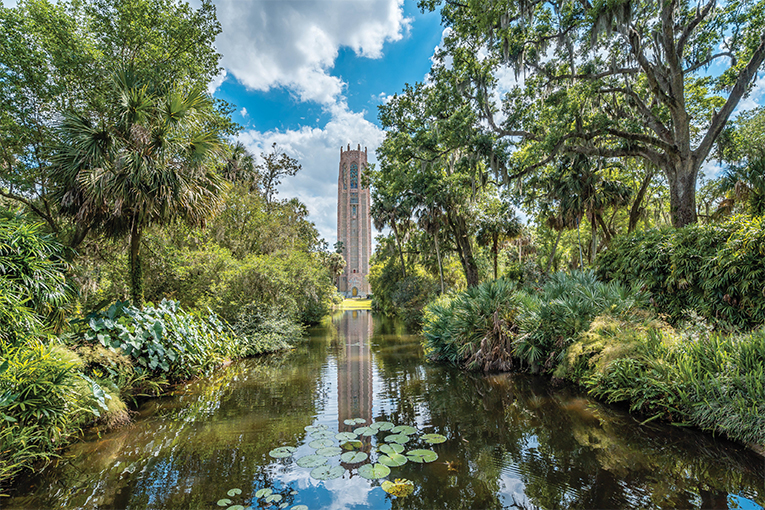 Welcoming more than 23 million visitors since 1929, this Lake Wales gem continues to delight guests daily with its 60-bell carillon ringing out from Bok Tower that perches atop the 298-foot Iron Mountain. Built from Georgia marble, coquina, and ceramic tile, the 205-foot Gothic Revival and Art Deco masterpiece (known as the “Singing Tower”) overlooks the rolling citrus hills and lush 250-acre botanical gardens nestled below. As part of the Great Florida Birding and Wildlife Trail, this serene oasis is home to more than 100 bird species that flit between the live oaks, magnolias, sabal palms, native plants and wildflowers. With special events year-round—including concerts, art workshops, and culinary events—Bok Towers is worth the drive in any season. Before you leave, tour the adjacent Pinewood Estate, a beautifully restored 20-room mansion built in 1932, for an up-close look at 20th century Mediterranean-style architecture. -L.B. 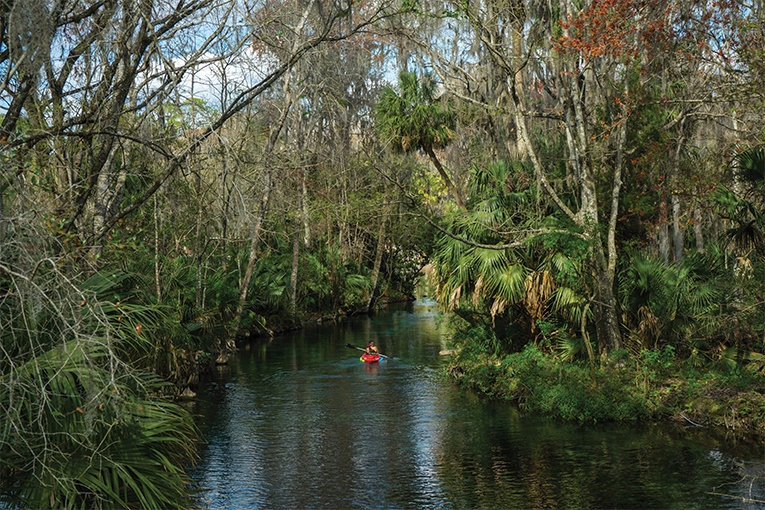 With 5,000 acres to explore at Silver Springs State Park, the property’s crown jewel continues to be its waterways. As one of one of the world’s largest artesian springs, Silver Springs gushes up to 550 million gallons of clear water every day and began attracting tourists back in the 1820s. The springs form the five-mile Silver River, which feeds the Ocklawaha River, eventually flowing into the St. Johns River. When two enterprising men attach­ed a piece of glass in the bottom of a rowboat in the late 1870s, an iconic attraction was born. Providing a window to aquatic life below, the world-famous glass-bottom boat tours of the Silver River have been delighting visitors for more than 100 years. During the 30- or 90-minute journey, visitors might spot alligators, turtles, manatees and many species of fish as well as submerged Native American and Spanish artifacts. And, as part of the Great Florida Birding and Wildlife Trail, Silver Springs is the home many aquatic and woodland birds, including limpkin, wild turkey, bobwhite quail and warblers. Dig into a bit of history at Silver River Museum and Environmental Education Center (open to the public on weekends and holidays), which includes a late-1800s pioneer “Cracker” settlement and a 1930s one-room schoolhouse. -L.B. 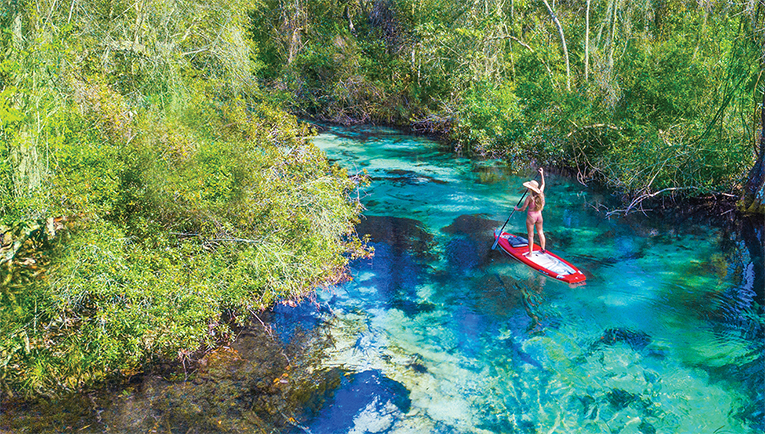 Opened in 1947 by former U.S. Navy man Newton Perry, Weeki Wachee Springs debuted with a soon-to-be-iconic mermaid show. These underwater performers dazzled thousands of fans over the years (including Elvis Presley) with their synchronized ballet moves. The nod to nostalgia continues today in the current 400-seat theater embedded in the side of the spring 16 feet below the surface, where modern mermaids perform three shows a day. This 538-acre destination, now part of the Florida State Park system, makes a perfect family outing with Buccaneer Bay and Lil’ Mates Caribbean Cove for the kids, plus swimming, snorkeling, tubing, and a boat tour along the Weeki Wachee River. As home to the deepest freshwater cave system in the United States and teeming with wildlife, the fun goes beyond enchanting merfolk. -L.B.

Spend a tranquil hour touring the pristine Winter Park chain of lakes in an 18-passenger pontoon boat that winds its way through Lakes Osceola, Virginia, and Maitland. The boat also squeezes its way through narrow canals covered by lush ferns and tree canopy. Navigating local waterways since 1938, the tour boats take you past opulent estates, Kraft Azalea Gardens and the majestic Rollins College campus. Tour guides share Winter Park history along the way, pointing out where famous celebrities once lived. Stunning natural beauty lines the waterways, from swaying palms to towering cypress trees. If you’re lucky, you might catch a glimpse of cranes overhead or alligators in the water. With tours leaving hourly between 10 a.m. and 4 p.m., you can shop along the tony Park Ave. area, then board the open-air boat on the east end of Morse Boulevard on Lake Osceola. -L.B. 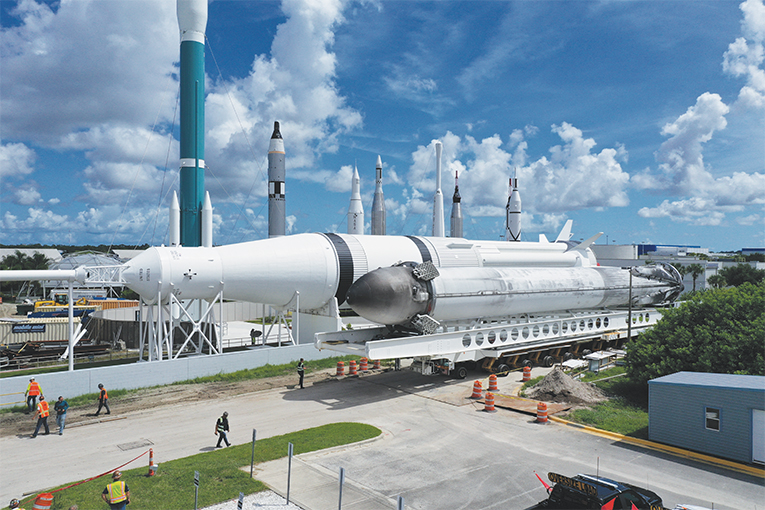 Kennedy Space Center has been the epicenter of US space exploration and the embodiment of the American can-do spirit for sixty years. Millions of visitors have passed through the Visitor Complex to get a glimpse of man’s exploration of space. But while we laud the achievements of the past, KSC is also looking to celebrate the present—and move forward with a brand-new attraction, Gateway: The Deep Space Launch Complex.

Upon entering the Gateway building, come face-to-face with a collection of actual space-flown artifacts and full-scale models, including the SpaceX Falcon 9 booster (officially known as Booster 1023) that supported two SpaceX missions. Next, visit the Robotic Trail Blazers wall to learn about nearly 40 satellites and probes in space through interactive touchscreen displays. Finally, explore Spaceport KSC, billed as “the first and only airport of the future.” You’ll be transported forward in time for a chance to board one of four spaceships that will offer various adventures: Cosmic Wonders, Daring Explorers, Red Planet and Uncharted Worlds.

In addition to all of this, the new facility offers a rooftop space that hosts special events, including launch and landing viewing. -B.F.

This article appears in the May 2022 issue of Orlando Magazine.
Categories: Arts and Events
Tags: attractions, old-florida, theme park, theme-parks
Want to read the whole issue? Download and read this issue and others on Magzter.