Saying “I Do” to including your pet in your wedding ceremony.

When bride Taylor Miller had to move her February wedding indoors, she was devastated that her rescue dog Lemon would no longer be able to be a part of the ceremony.

“We were getting married in the Rialto Theatre in Tampa, and I thought, no way would they want a dog in a historic building,” says Miller, an Orlando resident and digital producer for Disney Parks and Resorts. “Besides, how would we get her back to the hotel? Who would watch her? Everyone we love and trust enough to take care of her would be at the wedding.”

But the bride’s brother and sister-in-law surprised the couple by arranging for the owners of Tampa Bay’s FairyTail Pet Care to bring the Chihuahua/Pug mix to the ceremony. On cue, Lemon bounded down the aisle with the rings attached to her red rose floral collar that matched Miller’s bouquet.

“When I saw the blue doors open and there was Lemon, my jaw dropped. It was truly one of the most special moments of my life,” Miller recalls. “Lemon is a huge part of our lives. She is family. We wanted her to share in our special day.” 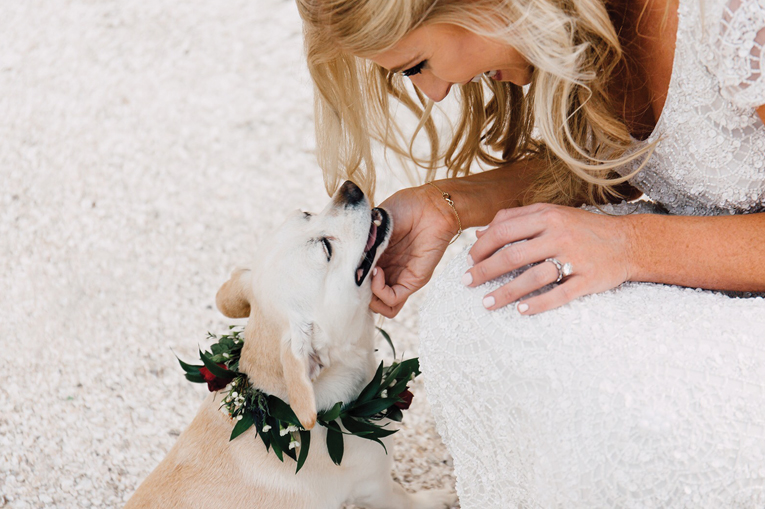 Having pets in weddings is no longer unusual—whether it’s a llama in tulle standing in as a flower girl or a favorite potbellied pig making a star appearance during cocktail hour—as couples search for ways to customize their weddings.

“People are obsessed with their animals,” says FairyTail cofounder Ilana Mobley, whose company has helped incorporate pets into the weddings of more than 90 couples in the past three years. “They know they want their pets in their wedding but they don’t think about the logistics. Then they realize they don’t want their mom to have to take the dog for potty breaks or have the maid of honor stuck on dog-sitting duty. Our job is to offer peace of mind on an already hectic day.”

Such weddings are certainly memorable. Kelly Meister and her husband, Dudley, decided to incorporate both their passions in their 2013 wedding ceremony. “He played the guitar, and I rode Bit, my chestnut quarter horse, into the arena in the horse rescue facility where our wedding took place,” says Meister, a Toledo, Ohio, animal activist.

Because pets often have a mind of their own, she choreographed a simple routine with Bit. “We practiced many times so he would understand exactly what I wanted on the wedding day. To my considerable surprise, he actually did what he was supposed to do. I gave him a blue ribbon afterward for winning in the ‘wedding trot’ category.”

But it’s best to be prepared. With animals in weddings—as with children—what can go wrong, often will.

Los Angeles pet expert and author Steven May knows that all too well. As his German shepherd Snow—complete with white veil—began walking down the aisle at his outdoor wedding, May realized the dog was about to relieve herself. “I ran down from the altar, grabbed her and took her around the corner to do her thing.” They returned to great applause, and the ceremony continued without incident. 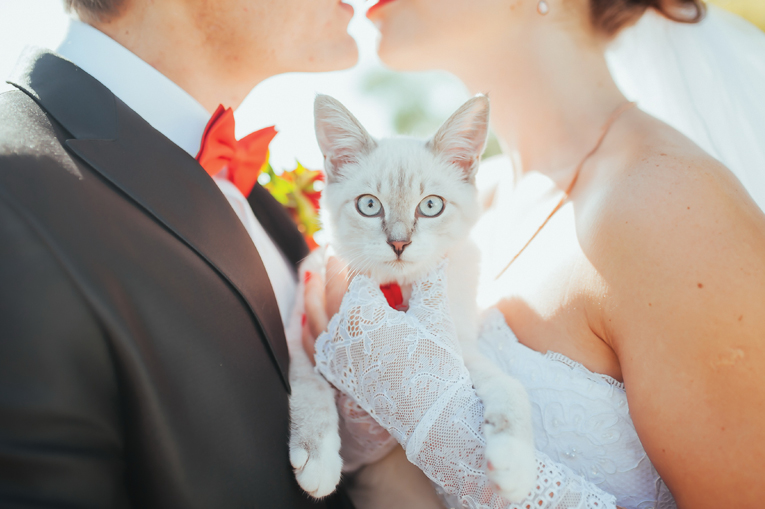 Megan and Kevin Nelson chose their wedding venue because of their two dogs. “Our girls are truly like our children, and we like to do everything we can with them,” say the Orlando couple. “When we got engaged, the first thing we decided was to have them in the ceremony. A dog-friendly venue was completely non-negotiable.” Happily, they found the Heathrow Country Club, which welcomed Rosie—who walked down the aisle alongside Kevin—and Zoey—who accompanied the bride and her father. Then the two Golden Retrievers stood quietly with the bridal party throughout the ceremony. Says Kevin: “Surprisingly, everything went perfectly!”

Even if your beloved pet can’t be there in person, some couples have found other ways to make them part of the day. Jennifer Jenrette of Rancho Santa Margarita, Calif., has had her pet tree frog Bud for 18 years. “He’s been by my side all of my adult life and he’s very special to me,” she says. “He’s not big on traveling, so I didn’t think it would be a good idea to bring him to our wedding. But it was important to me to have him be a part of the festivities.”

Her solution: She placed a large vintage frog-shaped wicker basket at the entrance to her reception with a sign that read: “Ribbit, ribbit. Please place your cards in my belly. I will keep them safe for Jennifer and Dan.” The basket was decked out in the same chartreuse striped tie that her husband and his groomsmen wore.