Ashlyn Guy and Donnie Spearman married under sunny skies at Tavares Pavilion on the Lake in Tavares just after a major hurricane blew through the state. And Sidney Raiski De Morais and Kyle Wilton had a fashionable affair at Casa Feliz, a historic home in Winter Park.

What happens when a social media influencer with almost a quarter million followers on Instagram gets married? Expect a detail-oriented wedding plan that you can follow—from engagement to honeymoon—on any mobile device.

When Ashlyn Guy (@_whiteafterlaborday on Instagram) married Donnie Spearman on October 13, 2018, she wanted a “very classic, elegant and timeless wedding,” she explains. “My goal was to have a vintage, 1950s wedding. My husband and I call ourselves old souls, and we say we were born in the wrong time.”

And so she collected more than one hundred brass candleholders at estate sales and antique shops for the tables. Dishie Rentals supplied a unique mismatched collection of timeless place settings, flatware and glasses. “I even had the linens custom made with roses printed on gold; it reminded me of something my grandmother would have had at her house.”

The pièce de résistance—topping off her gorgeous Wtoo dress—was Ashlyn’s nine-foot-long custom veil, which was created using lace from the 57-year-old wedding gown of her late Yia Yia (Greek for grandmother). 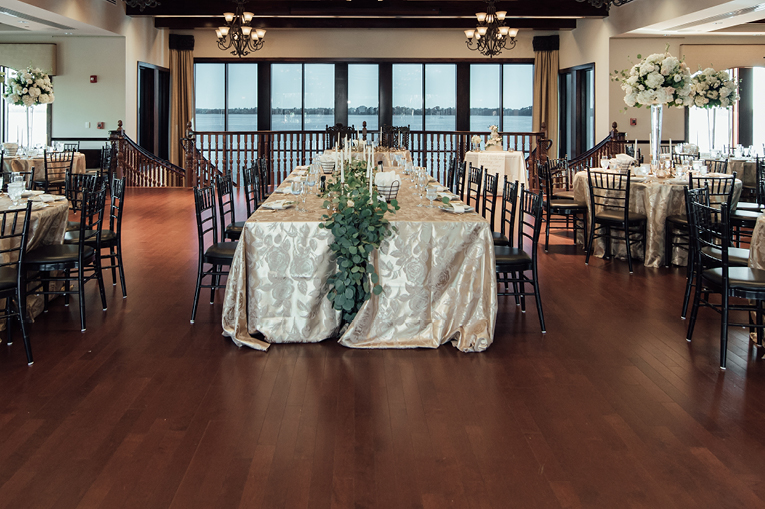 “My grandmother passed away a few years before being able to see me get married, so it meant the world to me to be able to turn her dress into my veil.”

Incorporating both sets of grandparents—both living and passed—was a big part of the day, Ashlyn says. When guests entered the venue, they were greeted with a photo display of the couple’s grandparents on their own wedding days, plus one highlighting the original dress and veil that Ashlyn’s grandmother had worn for her nuptials. Flags from their grandfathers who served in both the Army and Navy were also featured.

During the reception, a seven-piece band played lots of jazz and other oldies. But there were also modern touches, like the acrylic seating chart and place cards, plus garlands of eucalyptus and cream roses that ran down the long bridal table. The beautiful white and gold cake had four tiers of goodness: vanilla with a raspberry filling, chocolate with chocolate mousse, amaretto, and cinnamon apple. “We wanted to give people options,” Ashlyn says. 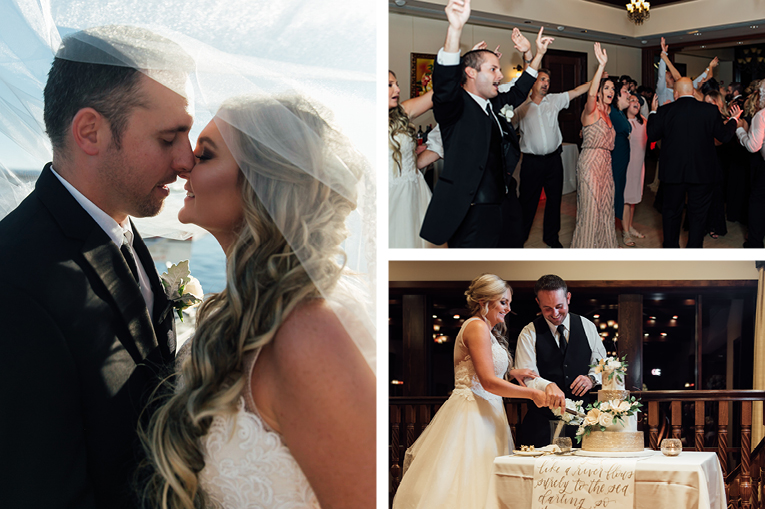 Family was everything during the couple’s Big Day. Donnie’s father got ordained in order to marry them. After saying their “I dos” on the pier of the Tavares Pavilion on the Lake, the couple made a grand entrance to their reception down the venue’s ornate winding staircase.

Thankfully, Mother Nature also cooperated. “I was super nervous,” Ashlyn says. “There had been thunderstorms and a hurricane just days before the wedding. The whole point of picking this spot was that it was on the water, so I wanted to be outdoors. I wanted that natural light—that’s the Instagrammer in me!

“And then during the rehearsal dinner the sun came out, and it was amazing. There was a zero percent chance of rain on our wedding day. We wed under the most perfect blue fall sky that Florida could offer with 82 degree temperatures. Not one single thing went wrong. The stars really aligned for us.” 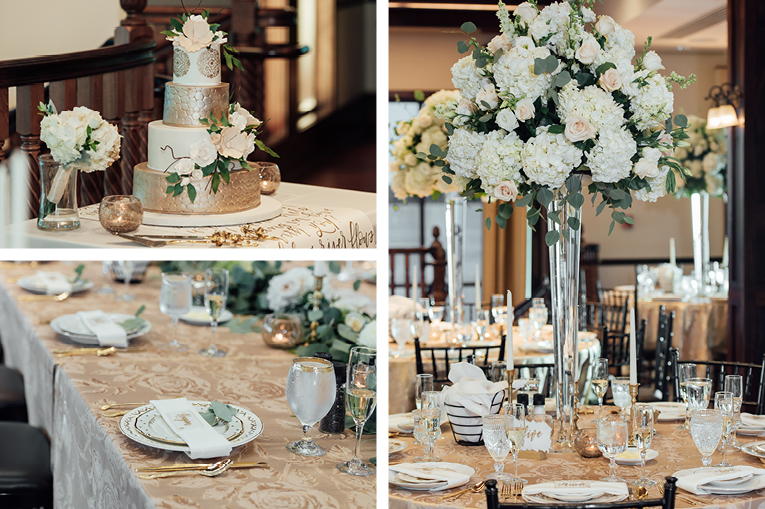 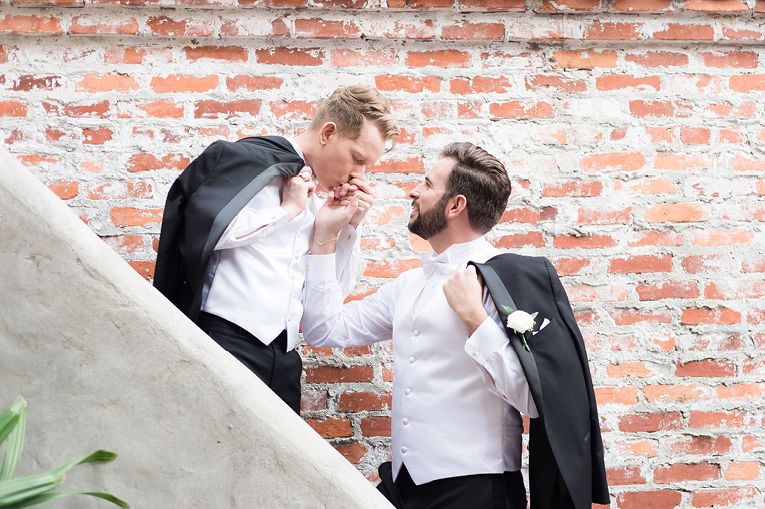 When planning his wedding to Kyle Wilton, Sidney Raiski De Morais had several requests: to start on time, to have the sunset in the photos, and to party and dance with his guests into the night. He got all three.

“It was wonderful, but the whole thing went way too fast,” says Sidney, whose new last name, Raiski-Wilton is a hyphenated version of their two.

The “simple, elegant, romantic” evening on November 18, 2018, was perfect in every way, he says. The women wore white. Friends they met serendipitously on their travels served as officiant and guitarist. There was even a nod to Sidney’s home country in the Brazilian chocolate truffles served with dessert. 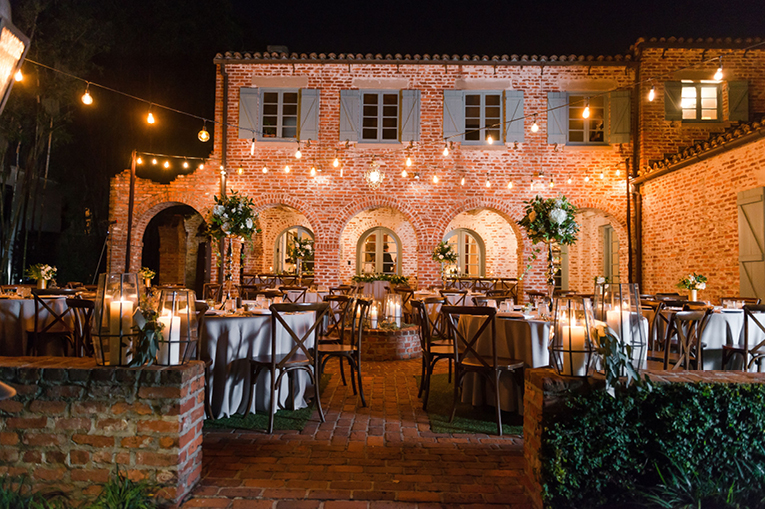 The couple, who met in Tennessee when Sidney was in dental school, got engaged during a romantic weekend in Miami. Once they decided to get married, they visited dozens of venues around Florida, toying with the idea of marrying on the beach. But they couldn’t find any place that really spoke to them.

When they finally saw Casa Feliz, a restored Spanish farmhouse in Winter Park, they realized it was the perfect spot. Yet the only open date was Thanksgiving weekend, which they didn’t want. They almost gave up, but then, miraculously, another couple cancelled, and Sidney and Kyle grabbed the November 18 date, leaving them only a couple of months to prepare.

For their elegant affair, they wore matching black tuxedoes with white bowties. Their Boston Terrier, Harvey, also matched (albeit with a black bowtie) and walked down the aisle with a groomsman. Both men had “best women” stand by their side for the ceremony, which was  held in the front garden of the historic home. 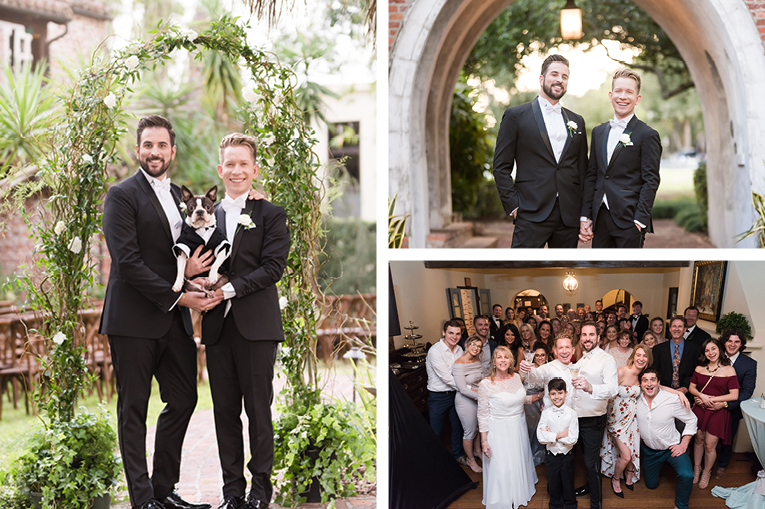 Flowers played a big part in the evening. Sidney’s godson, their flower boy, tossed lavender as he walked down the aisle. Sidney held a bouquet of protea and calla lillies, nicknamed “The Mohawk” because of its resemblance to the hairstyle. And mini succulents—hand-wrapped with burlap and ribbon by family members just days before the ceremony—were favors at each of the place settings.

Everything about the evening was classy. Even the cake was an elegant, neutral, two-tiered tower—one chocolate, the other coconut and raspberry. Guests also had a choice of a red velvet sheet cake.

Once dinner was over, the DJ stepped in and the night took off in a less sedate direction. As the evening drew to a close, the couple left in a shower of bubbles, but not before Sidney tossed  the bouquet.

It was caught by his best friend and “best woman” Vânia Piccinin, a Brazilian oncologist. “It was perfect,” Sidney says. “She’s beautiful, smart and single. And now she’s got the bouquet, so she’s ready!” 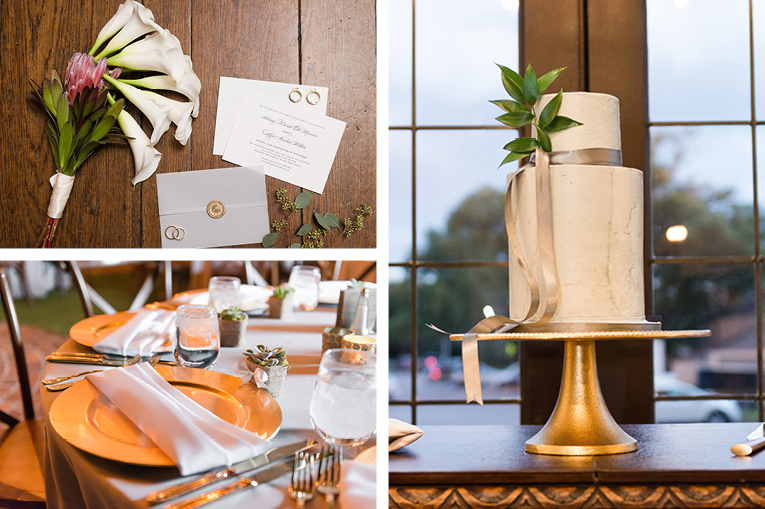