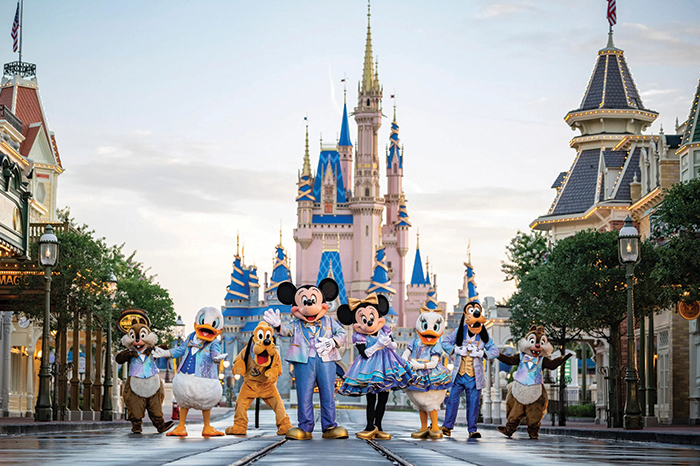 If you immediately think of world-class attractions when you hear “Orlando,” you’re not alone. And while Florida tourism certainly predates Walt Disney World, it’s hard to overestimate the impact that the mammoth resort has had on Central Florida.

This month, we celebrate 50 years of Walt Disney World, an anniversary that the company will mark in a myriad of ways, spanning 18 months. Here, we share some of the fete’s details, from the debut of new daytime and nighttime shows, to attractions openings and perks for resort guests. Look for plenty of delightful surprises (and yes, more than a sprinkling of pixie dust) to continue rolling out for the foreseeable future.

Nighttime: Look to the Skies and Beacons of Magic

Nighttime spectaculars have long been a hallmark of a Disney theme park visit. This month, Disney will launch two long-awaited new shows. At Magic Kingdom, guests can gather for “Disney Enchantment,” which replaces “Wishes.” The new show aims to inspire audiences to believe in the power of magic, and will combine music, lighting, fireworks and projection. For the first time, Disney will extend the projection effects down Main Street USA for an unparalleled, immersive experience.

At EPCOT, guests are finally getting to experience Harmonious, a new show that was originally expected to debut in 2020. The performance, one of the largest Disney has ever produced, pays homage to the power of music to tell stories and unite humankind, and will incorporate pyrotechnics and fountains, in addition to lighting and media. The music from the show incorporates 240 artists from around the world performing familiar Disney tunes in more than a dozen languages.

In addition to the new nighttime shows, all four parks will debut visual enhancements to their central icons. Magic Kingdom’s Cinderella Castle receives a healthy dose of pixie dust, while magical fireflies will dance among the branches of the Tree of Life at Animal Kingdom. Tower of  Terror at Disney’s Hollywood Studios is set to be bathed in light. At EPCOT, the changes to Spaceship Earth will be permanent: The geodesic sphere will sport new lighting that mimics the night sky.

Cool things are happening during the day as well.

What would a party be without new duds? Mickey, Minnie and their closest friends have all received new outfits in time for this year’s celebration, so be sure to grab a photo as you see them throughout the parks and resorts.

At Animal Kingdom, Disney KiteTails debuts Oct. 1, and takes place several times daily inside the Discovery River Amphitheatre. Look for wind catchers and kites—some 30 feet long—to fly above land and water in a celebration of our animal friends—including some beloved Disney characters.

In addition, new golden “Disney Fab 50” statues are sprinkled throughout all of the theme parks. The series of 50 characters, including Mickey, Minnie, Donald, Daisy, Goofy, Pluto and Chip ‘n’ Dale, are interactive, so be sure to hunt up all of them!

There are also some great reasons to book your staycation getaway during the 50th anniversary celebration. All guests staying at Disney resorts will have early morning access to parks, while guests at Deluxe resorts can enjoy extended evening hours on select nights at select resorts.

This article appears in the October 2021 issue of Orlando Magazine.
Categories: Arts and Events
Tags: 50th anniversary, Walt Disney World
Want to read the whole issue? Download and read this issue and others on Magzter.