If Vegas doesn’t float your boat, a nearby gambling cruise might.

On Victory Casino Cruises there are no hourly Bellagio-like fountain shows, no Cirque du Soleil extravaganzas, no endless gorge-a-thon buffets, no sleek tycoons laying down $5,000 bets.

But there’s plenty of pure, unadulterated gambling by mostly unpretentious folks looking for a fun fix of cards, dice or slots. Call it salt-of-the-earth gaming on the high seas. Well, maybe that last part is an exaggeration: Victory’s four-decker ship, which started sailing in late July, goes out just three miles from Port Canaveral, far enough to make it legal to play its table games ($5 minimum) of blackjack, roulette, craps and three-card poker, or bet on televised games in the sports book.

The real draw for many on these five-hour cruises, however, is the more than 600 flashy slot machines with wacky names like Little Green Men Family Reunion, Twice Your Honey and Shake Your Booty. (Yes, there are penny slots and, yes, they have Wheel of Fortune, the darling of slot addicts everywhere.) Victory even provides a wrist cord so you can stay tethered to your rewards card while it’s piling up credits inside
the machine.

Fare is $10, with the daytime sojourns dominated, not surprisingly, by senior citizens while the night and weekend trips draw a younger crowd and feature dancing at the Club V.  But you really aren’t here for the shaking of booty, or sailing or sun-worshiping or even the optional $15 buffet. You’re here to deep-six your troubles with games of chance—and to feel good about not spending all that dough on a Vegas trip.

Or, if you’re lucky, to watch your treasure ship come in.

The Victory ship sails daily—at 11 a.m. and 7 p.m. Monday-Saturday, and at noon Sunday—from Terminal B-2 at Port Canaveral. Parking is free across from the terminal. victorycasinocruises.com 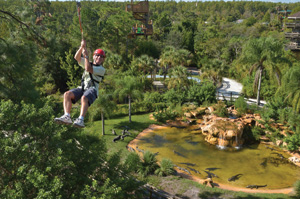 Gator Bait? Zip That Thought in the Bud

Don’t look to the guides on Gatorland’s Screamin’ Gator Zip Line to calm your fears of falling into a pen full of alligators or crocodiles. They’ll tell you the south Orlando attraction’s new adventure feature had a perfect safety record until only yesterday, when an “incident” occurred. Hey, nobody’s perfect, right? You’ll actually appreciate the humor as a guide fastens your harness onto a line that goes over four Nile crocodiles: This species, he’ll tell you with enthusiasm reminiscent of the late “Crocodile Hunter” Steve Irwin, “eats more people every year than all other crocodilians combined!” And so it goes over five zip lines ranging from 230 to 500 feet. You zip from one tower to another, crossing the 62-year-old wildlife park at treetop level and at speeds up to 25-30 mph. There’s also a 150-foot suspension bridge to stumble across en route to the final zip line, a dual setup meant for racing. The Screamin’ Gator requires little physical activity other than climbing a few flights of stairs, so it’s suitable for all ages, but it does require a reservation. $69.99 includes park admission. 800-393-5297; gatorland.com

This article appears in the November 2011 issue of Orlando Magazine.
Categories: Community, Travel