The colorful crew of Zombie House Flipping is headed for a prime TV slot in its continuing quest to bring Orlando houses back from the dead.

Keith Ori hangs up the cell phone grafted onto his ear, casts his eyes over the pink 1940s Delaney Park two-story that saw its best days 50 years ago and absent-mindedly pokes a fist through a half-broken window.

“Keith? What’d I tell you?” Eric Liebman has interrupted another conversation to comically scold “the talent.”

“NEVER break glass when the camera’s not rolling.” 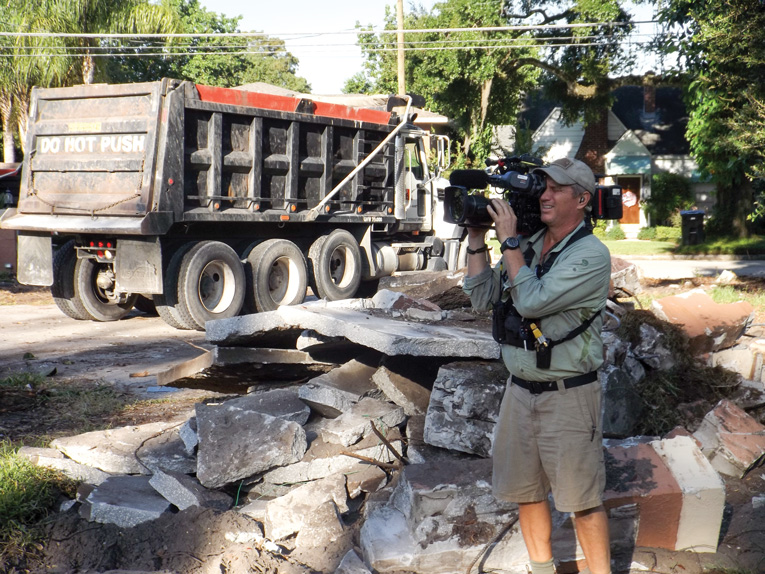 This oversized home is coming down—a good part of it, anyway. But the John Deere excavator can’t load chunks of a demolished three-car garage and driveway into a rotating team of dump trucks; the workmen can’t saw five feet off the end of the house; the Bobcat that Ori wants to use to haul away the massive heat pump can’t be cranked up without the TV cameras rolling.

The empty ruin at 1615 Delaney Ave. has been foreclosed on, abandoned—a “zombie house” in real estate parlance. But it’s getting its moment in the spotlight as the latest star of Zombie House Flipping, Orlando’s contribution to the tidal wave of renovation shows filling cable TV. It premiered on the little-seen FYI Network in January, but now the show and its Orlando team of Realtor/designer/builder/flippers is moving to the big leagues, with a bigger production budget. The parent A&E network, the cable giant where Duck Dynasty rules, where Hoarders has a home and Gene Simmons Family Jewels are on display, is moving Zombie into prime time, although no premiere date has been set. 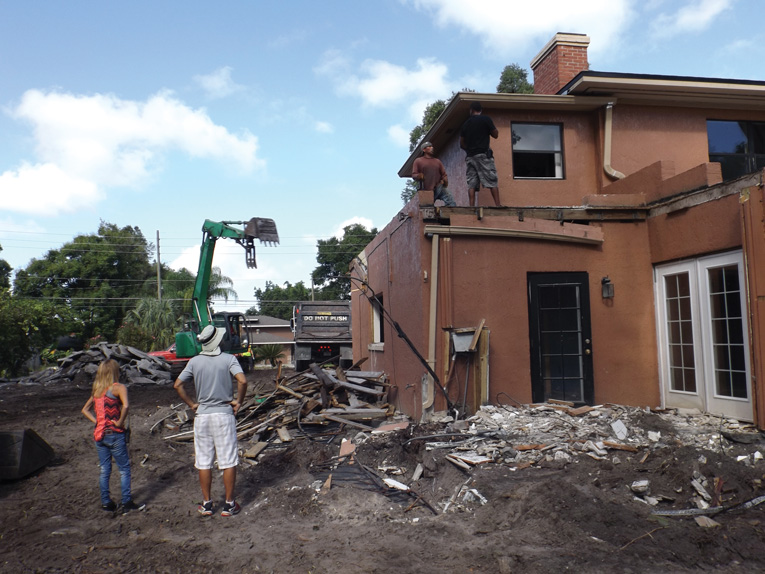 “This town is about real estate,” says Liebman, the director and on-site producer. “This is ground zero for bank repos and zombie houses. I’ve done a few of these shows all over the country. And I had never been in a house where fleas were jumping on your legs, bugs were going up the walls.

“The intensity and scale of the real estate market here means you had a much bigger implosion than other cities. The climate makes them turn to ruin more quickly. There’s a lot of zombie inventory for our cast to pick and choose from.”

The show’s producers stumbled across Orlando’s treasure trove of abandoned homes on the website of real estate broker Ashlee Casserly. A Realtor by day, occasional bartender at Matador’s by night, Casserly didn’t believe the phone pitch she was hearing. 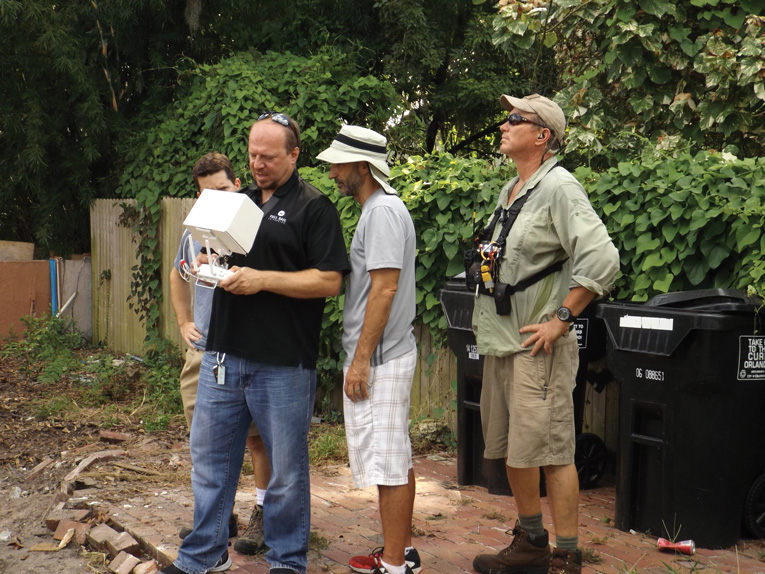 But then she thought of her friend Justin Stamper, a 20-something house flipper, a go-getter with a hipster vibe. Stamper brought in the 40-something Ori, an old hand at house flipping, and Ori summoned peer and fellow flipper Peter Duke. The dynamic of a reality TV series was set. It would have the “millennial making his first million” hook, the more experienced hands to disagree with him and the 30ish Casserly on the middle ground as Realtor and mediator for all the conflicts to come.

Stamper took up house flipping “almost as an act of revenge.” His family lost nearly everything when the housing bubble burst in 2008, and after getting together the money to save their home and spending time at the courthouse, meeting young real estate moguls who inspired him, he jumped in with both feet. He sees this work as righteous, a personal and community service. 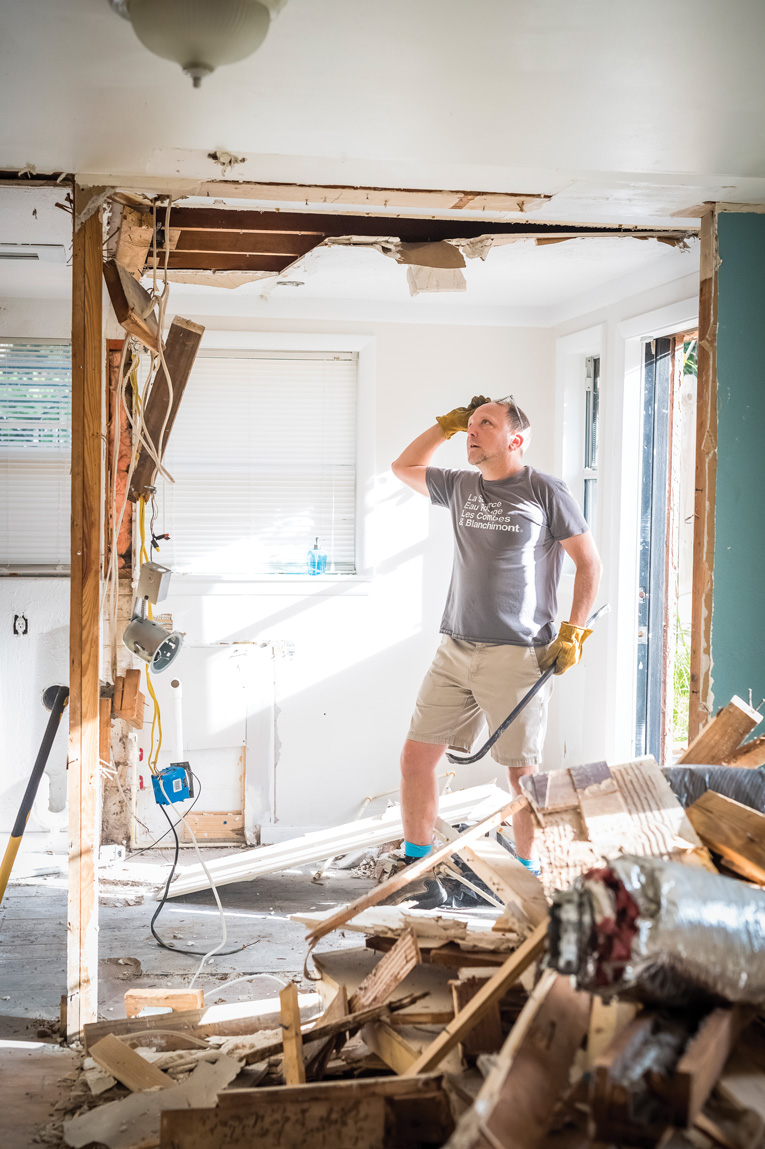 Ori puts a hurting on a house (ROBERTO GONZALEZ)

“It’s funny how the neighbors always seem to be glad to see us show up,” Stamper says, looking at the remaining Delaney Ave. rooms. The house had a neighborhood nickname: “The Compound.” It wasn’t a compliment.

“We’re tackling the ugliest, most run-down house on that street. The neighbors come over while you’re working on it to complain about how bad the place had gotten and thank us for turning it around. We take eyesores away, helping everybody else’s property values in the process.”

Bonnie and Van Church confirm that. They live some blocks to the east, and they’ve come in for the open house at a newly flipped zombie at 1218 Ridgecrest. It was “an eyesore. Every time we’d go by it we’d wonder, ‘When is somebody going to do something with that?’ ” Bonnie says.

Casserly walks through a couple of takes, installing “Open House” signs in front of the home, with balloons attached. The Churches and other couples get their pre-walk-through directions from directoor Liebman. “Feel free to touch things, be vocal in your reactions. Make comments about the house, the color. Don’t forget the door, guys. It’s a yellow that designer Duke picked out that won’t be to every taste.”

Each member of the Zombie House Flipping quartet is on the set at various times, trying to run their regular business by phone, or to hunt down fixtures or the particular “white oak flooring” that only Lumber Liquidators has in stock. There’s one zombie house project just getting started as another is finishing up, ready to go on the market. A chandelier must be rented for a scene with Stamper and Casserly. It may not stay in the house, may not be the final design flourish they’re expecting, “but we all have to think in ‘scenes’ now,” Casserly says.

Reality TV shows often build in ticking-clock deadlines, as in, “We’ve got to get this house ready before the open house!” The truth, flipper/designer Duke says, is exactly the opposite. He figured they’d just send a film crew and watch him and the others work.

“[But] you have to do the same action again, from a different angle. A lot of times we can’t do processes we’re ready for because the film crew is somewhere else. In the construction game, everybody has just one speed: GO. And now it’s, ‘Could you maybe come back next week to do that?’ Construction workers have a hard time with that. It’s something that takes 40 hours of the middle of your week so that you can’t work on anything else while you’re filming.”

That’s just the sort of take you’d expect from the show’s resident curmudgeon, “the ornery one,” Liebman says with a laugh. Duke, the “designer,” has that role to play.

Stamper, the “project manager,” is the voice of youth, all energy and ideas—wired, with a social life that might run at top speed, too.

Ori, the “builder,” plays the old hand at the flipping game, the sentimental one who has long left a message in a bottle to future homeowners inside the walls of every house he renovates. A car-racing enthusiast, his need for speed can get him ahead of himself. 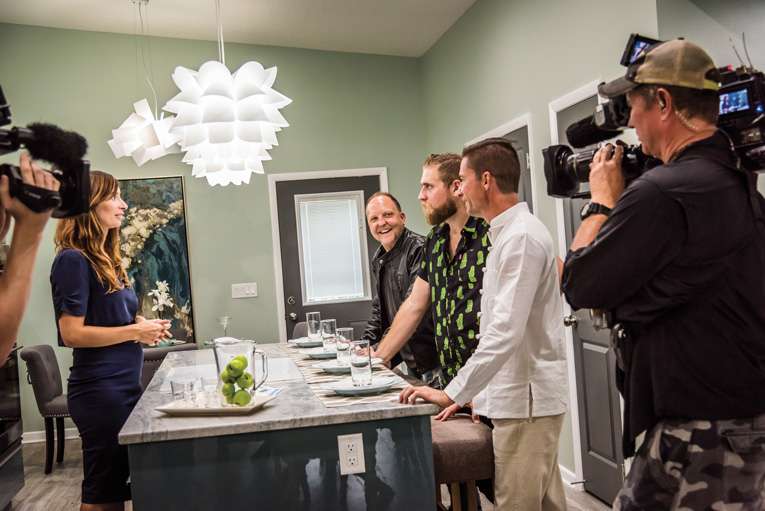 Casserly, the “Realtor,” is a little older than Stamper, younger than Duke and Ori, and keeps the peace while making sure her ideas are heard in a cloud of plaster dust and testosterone.

“We don’t have to force the drama or the comedy, having these four hosts,” Liebman says. “That creates a really cool dynamic, more opportunities for interaction, more people for the audience to root for. Or against. That’s key to making a show like this work.”

The drama comes from arguments, the comedy from blunders, stunts and the occasional prank. For instance, one house they were flipping had an old safe in it.

“We had Keith and Justin ‘MacGyver’ the safe open,” Liebman remembers. “But we’d already gotten the combination, looked inside and left them a little surprise.”

The stars recognize that editing 100 hours of footage into a single, hourlong program is going to exaggerate their various character traits, but they seem okay with it. “As long as my folks can watch it” at the bar the family owns in Tarpon Springs, Stamper is content. Casserly has been able to give up bartending and turn her real estate sideline into a full-service brokerage.

Duke, who jumped into house-flipping a dozen years ago “after selling car alarms,” and then mastered the various building trades, “from roofing and drywall to wiring and plumbing,” is more than happy being “the picky one. Our houses, I want them to be known for the attention to detail.”

And Ori? He’s getting into the “Hollywood” of it all—car stunts doing donuts on the lawn, tracking shots, the works.

It’s the first day for camera drone operator Brandon Horgeshimer on the set, and Ori sidles up to him, Liebman and cameraman Randy Schaffer as they peer into a monitor. He’s juggling seven projects in various stages of renovation in his day job, but Ori, like the rest of the flippers, has learned to “think in scenes.” He’s more than happy to make directing suggestions as he heads over to the Bobcat to haul that old AC unit to a waiting pickup truck.

“Hey,” he shouts over his shoulder, grinning and pointing skyward at the drone. “Can we do a Michael Bay thing? You know, with me going one way and the camera [circling above] me?’’