Why downtown Orlando might just be your next new neighborhood.

Downtown Orlando may have gotten a shot of adrenaline back in the 2000s when condo towers went up in the Thornton Park neighborhood on the edge of Lake Eola. Urbanites attracted to this southeast pocket of the city found luxury living and cool surroundings. But fast forward to the next decade, and a whole new energy is emerging in the city center. This time it comes in the form of luxury condos and rental apartments where hip, modern, green and high-tech are the buzzwords.

Stretching from Thornton Park through the heart of the business district to the North Quarter, downtown Orlando is transforming into a destination with its own distinct lifestyle where both home-owners and renters are finding a younger vibe and a new sense of community.

Maria Blanchard, a Realtor with Olde Town Brokers in Thornton Park, has been in the business for 28 years. She’s witnessed the waves of development. “Condos and rentals are cyclical,” she explains. “Right now there are a lot of people moving here [downtown Orlando] who are not sure they will stay. So they want to rent. Also, there are many homeowners still recovering from foreclosures and short sales, who find renting a solution. And often the rentals turn into condos.”

Downtown’s residents are an eclectic group. No doubt, there are plenty of professionals—the majority from late 20s to early 40s—who enjoy the option of walking to their downtown office, but there are also career folks who work outside the city and just want to come home to the urban lifestyle. Empty-nesters tired of maintaining big houses in suburbia, families with small children, and young couples starting out, along with a growing gay population, are all part of the mix. And with the residents come their pets. “Almost everyone has a pet,” says Stephen DeCristo, manager at Olde Town Brokers. “It’s a very pet-friendly neighborhood; even restaurants put out water bowls.” Realtor.com’s statistics report that 28 percent of residents are home-owners and that the median age is 35, compared to 41 for the state of Florida. At least 42 percent of downtown residents have attended college. 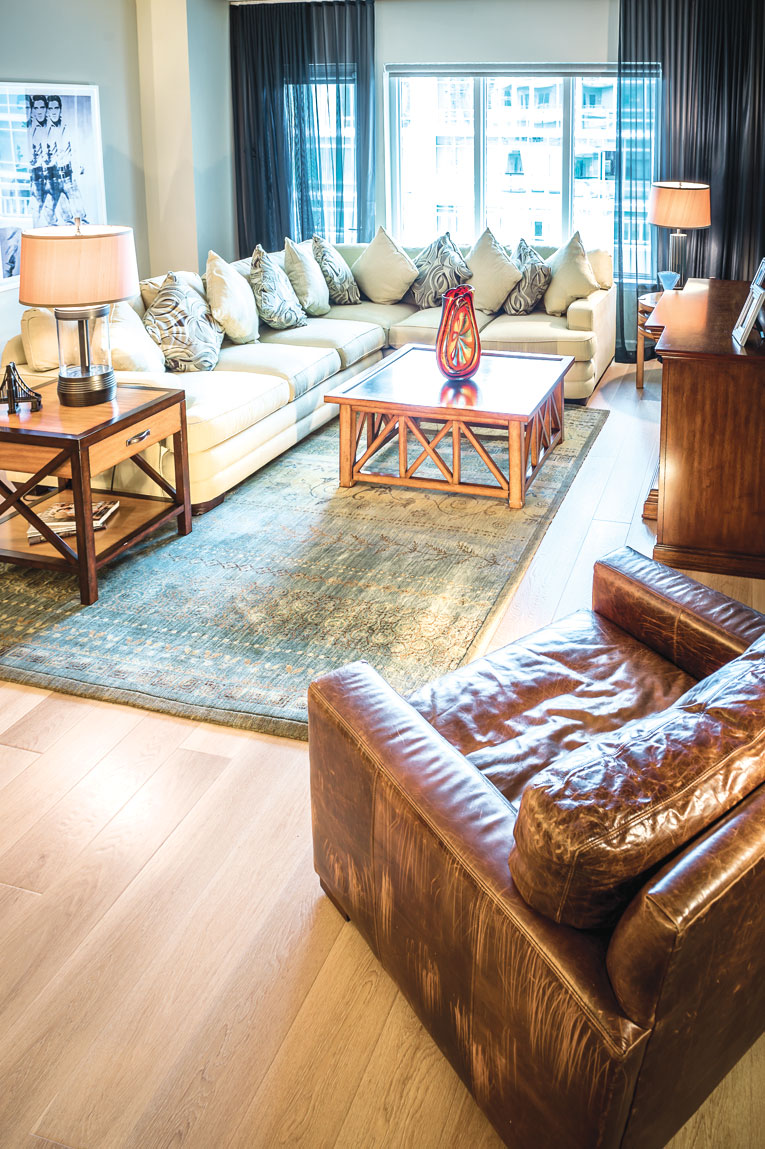 John Kelly, a native New Yorker, was steered to the downtown area by a friend when he had to make a decision between jobs in Orlando or New York. “I was done with New York, so I chose Orlando, knowing nothing about it. When I came I had very low expectations. In fact, it was the last place I imagined,” he says. But Kelly, a commodity futures broker at Morgan Stanley, was quickly won over by what he found. He moved into the Sanctuary, renting before buying a condo unit in the 19-story tower in Thornton Park.

“Coming from New York, I would go crazy without action. Now I’m three blocks from my office. I walk out my door and meet friends for drinks, go to restaurants,” he says. But Kelly’s litany of things to do goes further. He often pops into The Abbey, an entertainment venue on the ground floor of his building, hits nearby art galleries, and walks to the Dr. Phillips Center for the Performing Arts. Proud to be a donor, he describes Orlando’s new performing arts venue as “state of the art”—that’s quite a compliment coming from someone who used to live across the street from Lincoln Center.

Ryan Rudd, an Orlando attorney, lived in the Sanctuary before moving a couple of blocks south to Star Tower. “It has an old Hollywood feel to it, and it’s smaller than the Sanctuary, less residents. There are six to eight units per floor; the Sanctuary has 15 or more units per floor,” he gives as reasons for his choice. But when Rudd is not walking his yellow Lab around Lake Eola, he’s taking advantage of Star Tower’s 18th-floor rooftop amenities. In the morning, he’s on the treadmill watching the sunrise; he wraps his day with a swim in the pool or a soak in the hot tub as the sun goes down.

A Publix supermarket, the bar at the Grand Bohemian Hotel and the private Citrus Club, where he’s a member, plus regular visits to the farmers market at Lake Eola Park make it easy for Rudd to never have to get in his car and drive once the weekend starts. “There’s no reason; I have everything here,” he says. 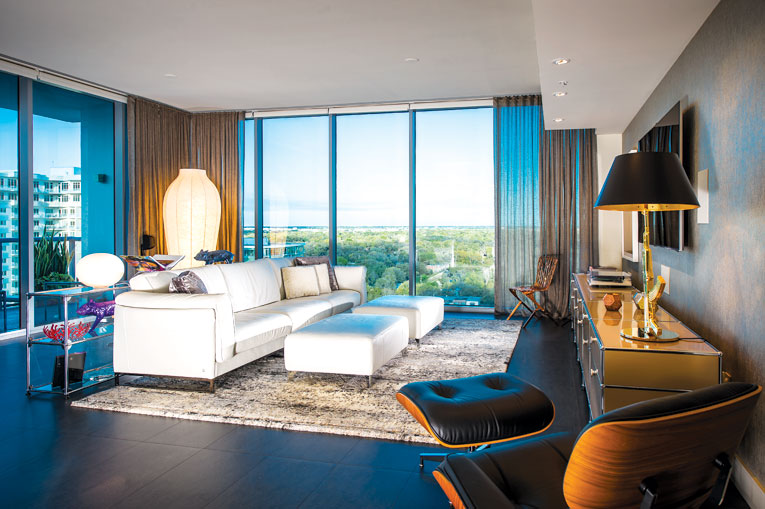 Ryan Rudd’s view of the treetops from his condo in Star Tower.

Creating a vibrant downtown took planning, and things like the Amway Center, the Dr. Phillips Center and the new Orlando City soccer stadium that’s under construction, are strong anchors. Programs like Orlando Bike Share, with its fleet of neon green bicycles and hubs where you can pick up and drop off bikes, are a real plus for residents—as is the Orlando Urban Trail that traverses the city, providing pedestrians and cyclists with a safe path. The Grapefruit Lymmo line is another people-mover option that helps reduce car traffic. The fare-free bus travels a 3.52-mile loop, stopping at 15 stations.

As attractive as all this sounds to city dwellers, some people aren’t convinced downtown is for them. DeCristo points out that when you live in a condo or an apartment, you don’t have the storage space of a house, you have either no outdoor space or just a balcony, and parking—getting in and out—can be problematic.

Silvana Wallinger, who along with her husband is relocating to Orlando from West Palm Beach, is not convinced that downtown is the place to call home. “I love the downtown. It’s beautiful,” she says, as she meanders around Lake Eola under the shade of live oaks dripping with Spanish moss. “But it’s too rough to live here—the homeless and the partying at night.”

Yet downtown resident Kelly Cohen explains that every urban area has its challenges, and the homeless situation is one Orlando has to deal with. “I don’t see it as a distraction, but an evolution,” she says. And the park ranger patrolling on bicycle is quick to credit the Orlando Police Department with cleaning up downtown’s presence and making Lake Eola Park safe and clean. To him, downtown’s homeless are not troublemakers.

Downtown areas beyond the Thornton Park neighborhood are also getting a residential boost. Two impressive skyscrapers on the east side of Lake Eola, near the heart of the business district, are getting plenty of attention from the rental crowd.  The striking 30-story Aspire, with a rooftop design resembling a sleek cruise ship, could have been plucked from Miami’s Brickell Avenue. Split between commercial space, from the ground to the 16th floor, and residential, from the 18th to the 30th floor, the building boasts floor-to-ceiling windows that provide panoramic views of Lake Eola and the city. But it’s the architecture’s sensual curves—the lobby’s waved ceiling, the units’ gently rounded windows, the swimming pool’s soft curve and the rooftop’s bended walls—that seem omnipresent and give the property such a sophisticated vibe.

A few blocks away, across from the courthouse, the glass-and-concrete SkyHouse Orlando rises up 23 floors. Another recent luxury addition to downtown’s inventory, the rental apartments here boast granite countertops, hardwood floors, ceramic tiles and floor-to-ceiling windows. Its crowning jewel is the rooftop lounge, where televisions are ubiquitous, and modern rattan furniture, a contemporary outdoor kitchen and fire pit encourage mingling with other residents. And of course, the swimming pool provides sensational cityscape views. 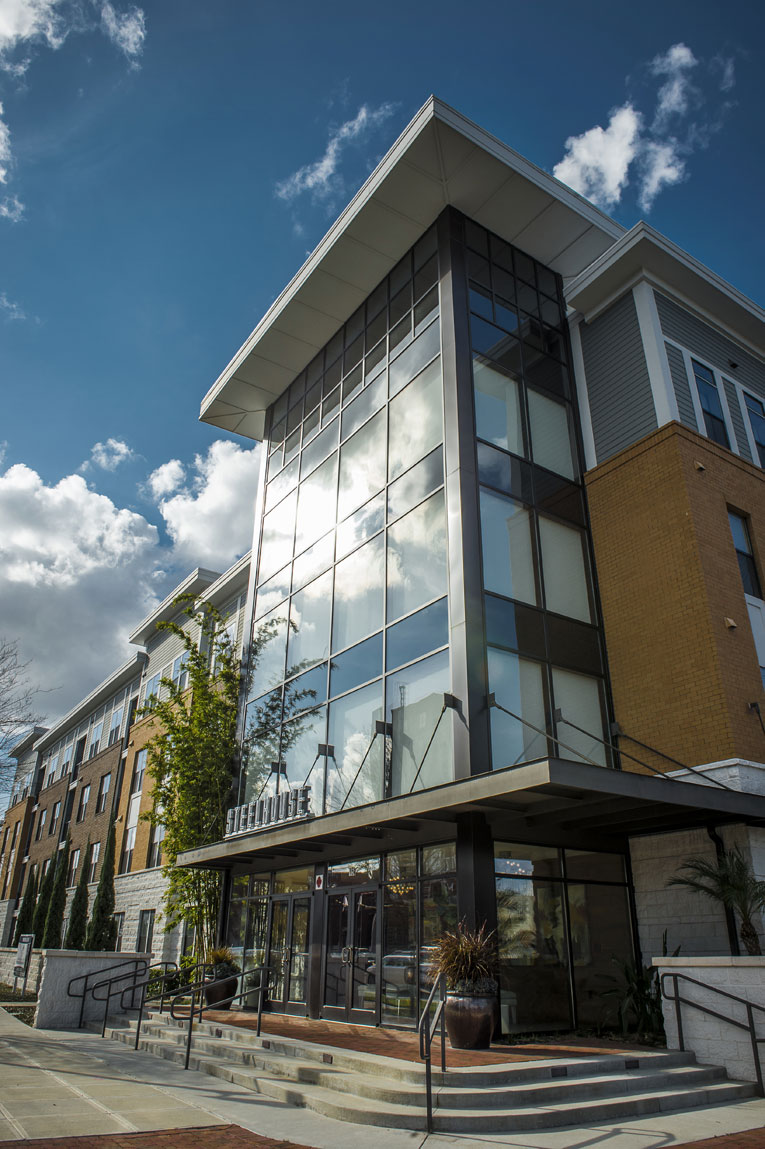 However, it’s the North Quarter that is percolating with a new kind of excitement. This neighborhood-in-transition centers on Colonial and Orange avenues, stretching north and south. You’re still downtown, but not in the middle of the nightlife scene. Freshly painted low-rise buildings in earthy tones with brick exteriors, like SteelHouse Orlando, and the contemporary-styled Nora are among the new rental offerings.

Just a few blocks south on Orange Avenue, the clanging of construction equipment signals another major project in the works: Crescent Central Station. The $200 million mixed-use complex will have a hotel, retail outlets, restaurants and a super-contemporary, six-story residential apartment complex. Some of the progressive amenities include keyless entry systems and electric car-charging stations. Plus, the Crescent’s proximity to downtown’s main SunRail platform is expected to make it a buzzing urban hub. Pre-leasing is scheduled to begin this spring.

Head north on Orange Avenue and you’ll find The Sevens, another rental property under construction. The nine-story complex will have 333 units, as well as space for a restaurant and shops, and it promises amenities galore.

It’s in these newer properties that green initiatives are making a statement. Although most residents appreciate them, they aren’t necessarily a determining factor in whether someone signs a lease. Yet residents like Jorge Cruz, who lives at Nora (which received the 2014 Golden Brick Award for Green Projects from the Downtown Orlando Partnership), says, “Green influenced my decision because my employer [Gucci] is big on social responsibility, like recycling. So when I found out that Nora has solar panels, recycling programs and energy-efficient appliances and lighting, which cut my electric bill significantly, it was a plus for me.”

There’s nothing like moving into a brand-new building, and these luxury rentals really kick it up a notch with amenities that one would expect to find in a fashionable South Beach resort. In fact, when Cruz first visited Nora, he says it reminded him of a W property.

His apartment looks into the courtyard, where a long rectangular swimming pool and an adjacent linear water fountain are surrounded by feathery palms. At night the fountain’s light show is an unexpected treat as colors change from blue to white to pink, and Cruz has a front row seat from his balcony.

And if the weather isn’t ideal, Cruz can be found in the club lounge, where on Super Bowl Sunday some 70 people packed the room to cheer on their team. “This is the only property I ever lived in where people actually use the amenities 24 hours a day,” he says. And with the anticipated opening of the adjacent Coffee Culture Café & Eatery, a cup of freshly brewed java and a bite to eat are literally just steps from the cushy sofas in the lounge.

Other amenities include Wi-Fi access, dry cleaning drop-off and pickup, music at the pool, an outdoor barbecue, a pool table and future pet-grooming stations. Nora has even solved one of the major minuses of both apartment and condo living: the parking. Residents enjoy spaces in the attached garage that are on the same floor where they live. Groceries never ride in an elevator; they go straight from the car to the apartment.

For an idea of what it costs to live downtown, Olde Town Broker’s Maria Blanchard offers these guidelines:

Brownstones at Thornton Park, a new project under construction, where 28 three-bedroom luxury townhouses measuring 2,100 to 2,400 square feet are on the market for $600,000 each.

These figures can give you an idea, but you also have to consider the application fees, security deposits, pet fees, as well as utilities, which vary by property, and of course, the homeowner association fee for condo owners.

All in all, life in a downtown Orlando condo or apartment can be pretty sweet, or 32801 wouldn’t be one of Realtor.com’s most searched zip codes, according to the website.

This article appears in the April 2015 issue of Orlando Home and Garden.
Categories: Neighborhoods