Master Legend keeps an eye out for evildoers while striving to take care of his fellow man.

Kate Kowsh,
The weary white utility van rumbles along Orange Avenue on a warm Saturday evening, its driver hunched over the steering wheel looking for those who would dare be up to no good. 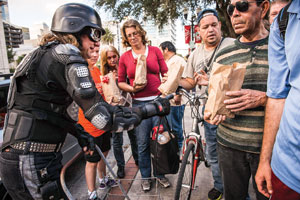 Certainly he would be hard to miss, this unconventional character who calls himself Master Legend and wears a handmade black and silver costume, combat helmet, thick goggles and metal belt. Since he moved here from his native Louisiana 20 years ago, his self-appointed mission has been to patrol the streets looking for evildoers. And while it’s hard to put a number on how many he might have thwarted, Master Legend’s tales about the battles seem endless.

He’s in the middle of telling one as he circles around a church, and a “crackhead beer store” that he says used to teem with trouble. “When I first came, it was running wild. People were getting robbed, houses broken into, people getting jumped, beat up and stuff. This neighborhood wasn’t like you see it now. I used to get into fights all the time.”
Suddenly he picks up a protein bar and almost without looking tosses it out the window of the van toward a destitute-looking man sitting on the sidewalk in a wheelchair—a man seemingly invisible to pedestrians. But not to a superhero.

And it becomes apparent that crime fighting isn’t Master Legend’s only mission. Like any sensible superhero, Master Legend doesn’t reveal his real name or where he lives. By day he is a 47-year-old carpenter, working through a string of temporary labor and side jobs. With his wiry, shoulder-length hair, he describes his daytime persona as that of a  “mild-mannered hippie,’’ which he says helps people confide in him details they otherwise wouldn’t. “Somehow, I run into people and they see me and they start thinking that I’m a fellow criminal, and they start telling me what they do,” he explains.

He tells a wrenching story of childhood abuse, including, he claims, a father who was in the Ku Klux Klan. One day when Master Legend was in first grade, he discovered a pile of superhero comic books stuffed into a garbage can while walking home from school. That inspired him to create his own costume and keep it in his backpack for school, ready to wear when he came up against bullies. A decade later he found himself homeless, “pretty much cast out in the world and living in the streets and along the Mississippi River, behind the levy.’’ The only help he received was from his “hobo friends” who taught him how to make a tent, find food, and fish the local ponds to survive.

Over the years, his exploits haven’t gone unnoticed. Master Legend was profiled in Rolling Stone magazine in 2008, and was part of an HBO documentary in 2011 that chronicled several figures from the national real-life superhero movement. These days when club-goers and others see him on the street and ask him to pose with them for photos, which is often, he assumes a ready-for-battle-at-any-moment stance, and obligingly puffs out his chest for the snapshot.

Master Legend’s van is littered with “non-lethal weapons,” including a homemade wooden shield and sword, even a small bullhorn to scare off troublemakers.  But he concedes that his adventures aren’t as rowdy as they used to be: “People haven’t been as violent these days.’’ At one time he had a sidekick called The Ace. But Master Legend hasn’t seen him in years, so these days he goes it alone, occasionally calling for backup from his collection of more than 4,000 Facebook followers on night patrols around town. “I’ve just gone back to the way I did things from the start,” he explains. “People can come and team up with me if they want to, but I’m not forming any more teams, because it causes obligations and conflict.”

In 2004, he received a commendation from the Orange County Sheriff’s Office for helping rescue people during Hurricane Charley. And in the Rolling Stone article four years later, a law enforcement officer confirmed that Master Legend’s tips  “helped put away a few criminals.’’ Today, however, he no longer has that police connection, and officials at the Orlando Police Department and the Sheriff’s Office say they just aren’t that familiar with Master Legend. They would not say whether it helps or hurts to have a self-appointed crime fighter battling on their side in the shadows.

It’s a few days before Christmas when the Justice Van pulls up near Lake Eola Park. For the next 30 minutes or so, Master Legend hands out toiletries, sandwiches, water, socks and blankets to a crowd of about 50 of Orlando’s homeless. The items were bought with donations he scraped together and with money he earns at his temporary labor jobs.

“Master Legend is a really decent guy,” Richard Peete, 57, says of his friend that day, as dozens surround the open back doors of the van. Peete, who Master Legend refers to as one of his “super friends” for helping to spread the word of this day’s giveaway, says he first met Master Legend about two years ago, while he was sleeping in a downtown church. “Him and his boys came up there giving out little treats,” he recalls. “Now I got no family and no job and no home, and I’m reduced to living out on the streets depending on people like him for something to eat.” 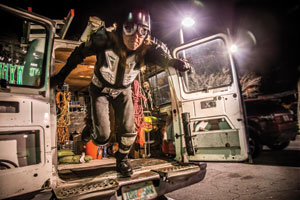 Master Legend says he advocates for Orlando’s local homeless population wherever he can, partly as a way to pay back those who helped him survive all those years ago. There are the announced giveaways, but on cold nights he also visits the residents of “hobo camps” in the woods, giving out blankets and other items, including dog food for pet “hobo dogs.”
He doesn’t seem to worry about his own shallow pockets.

“It’s supposed to be a duty, a person’s duty to help others, really, I always thought,” he says. “I don’t try to push much religion around, but you know, some people may not believe in Jesus, but they can believe in the things he did. He was trying to be a good guy.
“I believe those are the examples to live by.”

Master Legend talks about these things a lot on his Facebook page, and on his Internet radio show (recent show topics included “Bullies and Snobs’’ and “Master Legend Gives Real Effective Crime Fighter Tips’’). He says he’s writing his memoirs and wants to use the proceeds to fund more of his missions around Orlando. He also has teamed up with other homeless advocates to convert a downtown building into a community resource center for the homeless through the charitable Nehemiah Project Community Development Corporation.

“When I walk these city streets late at night, I can just know where somebody’s laying up in a bush,’’ he says of those who are hurt or homeless. “No one else will find them, but I know. I can tell they’re there.”

This article appears in the June 2014 issue of Orlando Magazine.
Categories: Community, People