A neighborly act ultimately leads to a couple’s dream home.

Denise Bates Enos,
Stephen and Kristin Pategas had lived on a quiet street in Winter Park’s Orwin Manor for 14 years when a neighbor called them in 1998 to discuss the neighborhood tradition of putting out Christmas Eve luminarias. After talking with the octogenarian widow for a few minutes, Stephen realized she would be spending Christmas Eve alone. “So we invited her to join us at the end of the street,” he recalls. 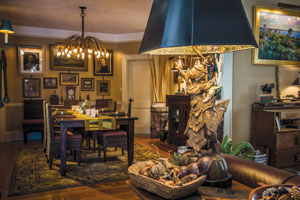 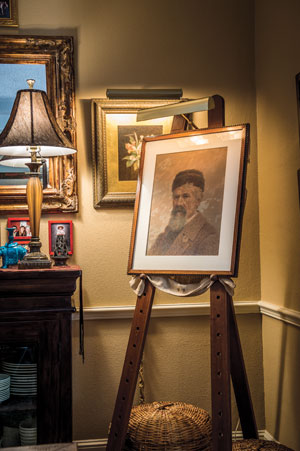 That act of kindness led to the couple discovering that the woman would soon be selling her home of nearly 50 years. For Stephen and Kristin, who run Hortus Oasis, a landscape design firm, it was almost as if fate had brought her to their door: “We needed a bigger house, and her house is right across the street from the park we designed,” says Stephen, a landscape architect. “Talk about going full circle.”

The park the Pategases laid out, The Park at Orwin Manor, was created in the early 1990s when the City of Winter Park provided land for that purpose. The couple donated their time and talent to design a friendly oasis of green that the entire neighborhood could enjoy. The prospect of living directly across from the park was irresistible to the pair, and it didn’t hurt that the circa 1925 Mediterranean Revival home had loads of charm and architectural appeal. The double lot it sat on—perfect for the couple’s love of gardening and outdoor living—was another plus.

Initially, the Pategases approached the homeowner’s son, who was handling his elderly mother’s affairs. It turned out there were a half-dozen other interested buyers. “Each of us had to write a letter with our best offer,” recalls Stephen. “We got a call saying he had accepted our offer; he may have gotten more for the house, but he knew we’d keep it up.” They moved into the home in December 1999.

So dedicated are the couple to preserving the house that they had it registered with Winter Park’s Historic Preservation Commission in 2005. “We listed the house so it cannot be destroyed; we wanted to preserve it forever,” says Stephen. A plaque attesting to the historic status can be seen beside the triple-arched Palladian-style entryway, a door so distinctive that it was featured on a poster of notable Central Florida doors that was created for the Orlando Opera in 1992. 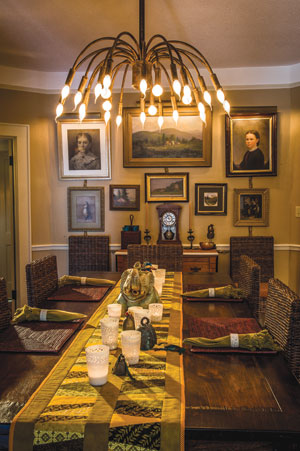 While determined to preserve their home’s charm and architectural integrity, the Pategases (or “Pategai,” as they like to refer to themselves) have made some notable improvements. The changes begin at the front door; they painted the formerly white iron grillwork black. Through that door is a beautifully built home with Craftsman-style finish work and a traditional bungalow layout with the bedrooms clustered on one side.

The dining room is the hub, with rooms radiating from it. “It is truly the heart of the home,” says Stephen. The dining room’s walls are adorned with paintings by Kristin’s great-great grandfather, William M. Davis, a notable 19th-century artist. Several of the works are of Kristin’s ancestors, and she says she can see in those long-ago faces many family resemblances that have carried on into the current generation. 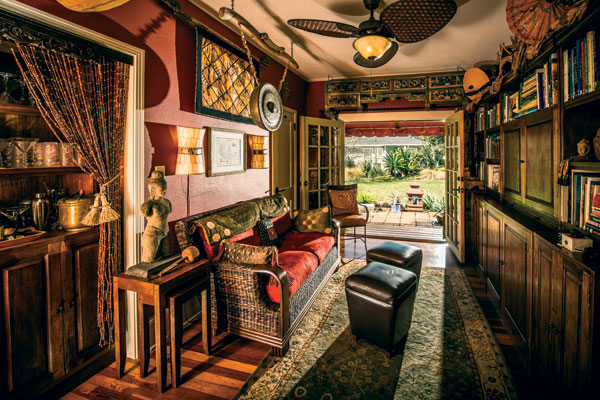 A self-portrait of Davis is also in the room, displayed on an easel at which he painted.In one corner of the dining room is a hand-hewn Indonesian grobok, an antique food storage cabinet that the couple found on a buying trip with good friends Phil and Regina Carpenter, owners of the Island Collection furnishings and accessories store in New Smyrna Beach. The Carpenters host journeys to Bali and other exotic ports of call for people interested in tropical décor. “When we’re shopping with Phil and Regina, we’re not shopping with suitcases; we bring a tractor-trailer,” says Stephen.

The grobok is just one of the home’s many exotic pieces; others include artifacts from Pacific islands, Asian outposts and the Middle East. A jade-green ceramic elephant from Thailand rests next to the living room sofa, and a metal gong from Bali hangs in the combination den/library. A Turkish grain thresher serves a new purpose as a piece of wall art.
Each bedroom features a South Pacific-style bed canopy, and a colorful tumble of paper umbrellas from Laos creates a freeform sculpture of sorts in the master bedroom. The effect is both exotic and alluring, inviting visitors to pause and more closely examine the unusual treasures in each room.

But before they could focus on decorating the three-bedroom home, the Pategases concentrated on updating and improving the interior, including refinishing the hardwood floors, raising a few low ceilings and having the place rewired. They also made a number of cosmetic changes, including restoring the red brick look of the living room’s fireplace surround, which had been painted white. 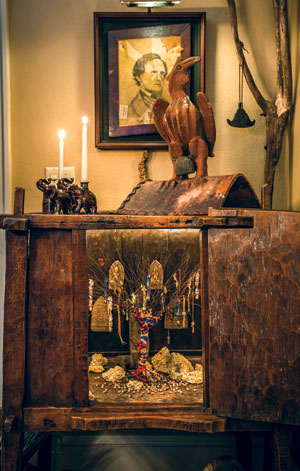 Other changes were more extensive and dramatic. The Pategases brought light into the dining room by replacing one wall with French-style pocket doors. Those doors lead to a cozy, book-lined den (formerly a bedroom) with a bar and entertainment center that were custom-made in Indonesia; French doors also were added to the room’s exterior wall to provide a view of and access to the large side yard.

One ceiling that they didn’t raise during those early renovation efforts was in the kitchen, but the couple’s eventual plan to remove it was accelerated when it collapsed a few months ago. The kitchen boasts original Youngstown metal cabinets that were installed during a renovation in the 1940s. Appreciative of the streamlined design and nostalgic appeal, the couple planned to keep the retro-cool cabinets when they eventually did their own renovation—but knew it would be a challenge to match them. That is, until a friend told them of another Youngstown kitchen in town, one that was to be demolished. The Pategases contacted the homeowners, who agreed to let them salvage the cabinets. Now they’re in storage until the renovation takes place.

“What I love about this home is that it lets me use all the skills my mom taught me,” says Kristin, a horticulturalist and certified landscape designer. “She sewed, she painted, she entertained—those things that make a house a home. That’s what I love most about this place.”

Kristin’s handiwork can be seen throughout: She made the window treatments for every room, sewed the coverlet and other bedding for the master bedroom, and even crafted a shower curtain to conceal the home’s only bathtub, which is an unfortunate shade of fleshy pink, the result of a circa 1960s bathroom renovation. Her latest creations are piecework table runners, one for each season made from fabrics found on their travels. It’s a favorite hobby of hers, and her artistry also can be seen in the guestroom coverlet and pillows throughout the home.

Once the Pategases remade the interior to suit their tastes, the couple turned their attention to the outside. First, they changed the white stucco to a warmer and more welcoming shade. The custom color, which they’ve aptly dubbed “crème caramel,” lends a hospitable air and a sense of richness. 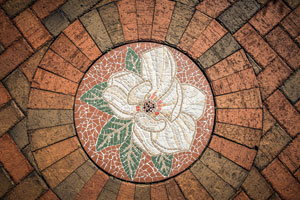 Contributing to the home’s renewed curb appeal, the decorative wooden railing over the front door’s ornamental porch was replaced with a lower-maintenance metal replica, now painted black instead of the original white, and copper gutters were added.

A commanding presence on the property is a towering magnolia tree, which the couple have adopted as the symbol for their landscape design business. A magnolia blossom adorns their company logo, and a mosaic medallion of a magnolia in full bloom punctuates the brick walkway that leads to the home’s front steps. The theme also continues into the master bedroom, where hand-carved wooden magnolia flowers serve as knobs for the custom-made closet doors.

Given the couple’s chosen profession, it’s no surprise that the Pategas property includes green and growing points of interest. One wall features trellises covered with Confederate jasmine, which serve as a verdant frame for a carved limestone panel from Indonesia and a vintage concrete birdbath the couple found at White Wolf Café nearly 20 years ago. Container gardens housed in antique chimney pots and an old coral stone fountain salvaged from the Peabody Orlando hotel dot the landscape, as do vegetable-and-herb gardens that are harvested frequently for cooking ingredients. 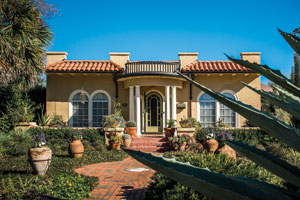 There’s also an “herbtini” garden, which celebrates the couple’s signature drink. The garden features the herbtini’s ingredients, including thyme, oregano and rosemary plants, and an olive tree. As a whimsical touch, Kristin and Stephen have also “planted” empty gin and vermouth bottles by upending them onto rebar driven into the ground. The herbtinis are often enjoyed on one of the couple’s most recent projects: a new patio they’ve dubbed their sunset terrace. They used large laterite stone squares weighing 30 pounds apiece brought back from Thailand to form the bulk of the patio, rounding it out with circular grinding stones from Turkey. The patio looks out over the yard’s towering magnolia, its branches decorated with hanging lanterns that shed light on the dining table below.

The Pategases are firmly planted in their Orwin Manor home, looking forward to many years of home-improvement projects—and herbtinis. “This house has allowed us to combine our lifestyle, passions and creativity into one space—a space that is now uniquely ours,” says Kristin.

“Being in the right place at the right time really makes a difference,” says Stephen of the serendipitous connection they made with the home’s former owner on that long-ago Christmas Eve. “This house was built for us before we were born; it’s such a natural fit for us.”