Cancer struck Pat Williams hard. But it also gave the Magic executive motivation to practice what he preached.

Pat Williams was driving to see an oncologist, even though, he admits now, “I didn’t know what an oncologist was.” But after receiving the results from a physical, it’s where his family doctor sent him, to a medical center in Altamonte Springs. 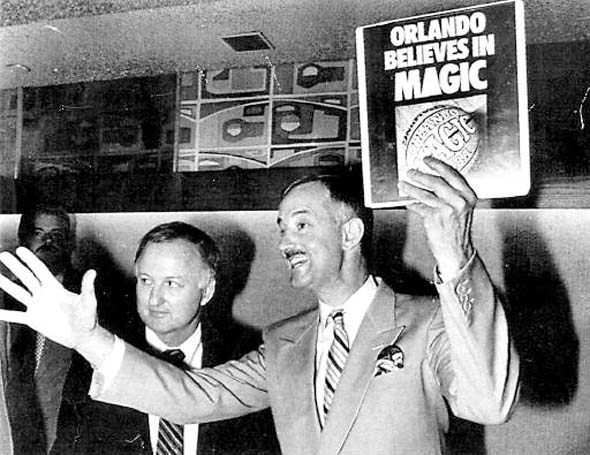 That’s where Williams saw the sign and read the words: Cancer Institute of Florida. Cancer! What am I doing here? He still didn’t get it. Still didn’t understand.

Williams was 70 that January day in 2011, and he’d never spent a day in a hospital. A fitness fanatic who has an elaborate home gym just off his bedroom, Williams was up to his 58th marathon and counting. His 19 children—14 of them adopted—had given him eight grandchildren. He had planned out his next 10 years and was even contemplating what he’d do in his 80s, already knowing which books he wanted to write, what speeches he wanted to work on and how old he needed to be to set the age records for running both the New York City and Boston marathons, which he had completed a combined total of 23 times. Life was good for the Orlando Magic senior vice president, prolific author and sought-after motivational speaker. But life was about to change. Forever.

“You’ve got an illness,” Dr. Robert Reynolds told him.

Even then, Pat Williams didn’t get it. 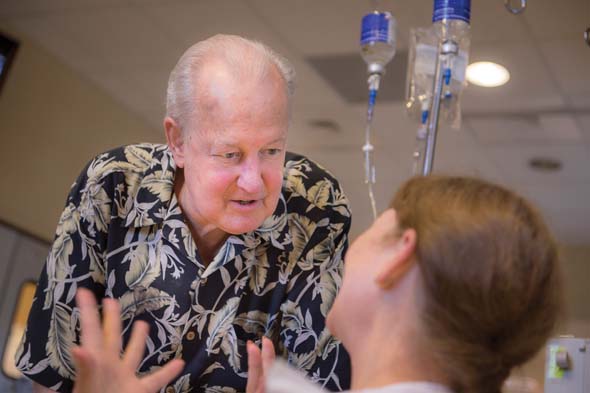 Williams’ mind spun into a dizzying vortex of emotions and questions, and it’s amazing now that he can recall any of what followed. One thing he does remember, though, is that Dr. Reynolds handed him a box of Kleenex, “and that I needed it.”
Williams learned that multiple myeloma is a cancer of the blood and bone marrow, and that its origins are unknown, although age is a factor. It’s incurable, but treatable. But questions lingered, ones not so easily answered, deeper queries that rocked the foundations of his faith.

“I kept saying to myself, ‘Why me? I really take care of my body. So how could this happen? Is God punishing me? Does God not love me anymore?’ “

Alex Martins, the Magic CEO who was the franchise’s CFO at the time, didn’t get the news from Pat Williams during those dark moments of doubt.  By the time Martins got the phone call from his friend and longtime mentor, Williams had reached an epiphany. This was a man who had made a second career monetizing motivation and positive thinking through both books and public speaking. He was a man of many slogans and passages of scriptures, quotes and quips, anecdotes and aphorisms. Pat Williams’ website isn’t just his name with a dot-com appendage—the official name is PatWilliamsMotivate.com. Was all of it just a lucrative side career, or did he really believe the things he preached?

There’s a Bible verse where Jesus tells the cynics that he knows what they’re thinking regarding his miracles: “Physician, heal thyself.” In Pat Williams’ case, he could hear the cynics chirping: Okay, Mr. Positive Thinker who’s made a nice living with all your books and speeches, let’s see you positive-think yourself through this.

Williams kept rewinding in his mind to what Dr. Reynolds told him the day he found out he had cancer. In typical Pat Williams fashion, he had distilled the doctor’s message into six bullet items that would be critical in his fight. Number one on Dr. Reynolds’ list was, in fact, Williams’ well-known positive approach to life.

It was this Pat Williams whom Alex Martins heard on the other end of the phone.

“I can still hear his voice when he told me he had cancer,” Martins says. “Al, we’re going to beat this. Don’t worry about me. I’ve got the best doctors. I will be all right.” In further recalling that conversation from two years ago, Martins muses, “His attitude has really helped him get through this. I don’t think it’s insignificant to say, considering the types of treatments he’s had to go through, that not everybody could’ve done it. If not for the type of approach and attitude Pat has, who knows where he’d be today?”

Still, it was a process. To benefit from the five other bullet items he gleaned from Dr. Reynolds—his faith, family, physical fitness, his Magic family and community support—Williams knew he first had to adopt and nurture the positive attitude he had always preached. It wasn’t easy. At times, he needed nudging.

The Cancer Institute of Florida has a room with a couple of dozen chairs that look like first-class airline seats. A flat-panel TV hangs overhead. Patients sit and endure IV tubes dripping toxic chemotherapy chemicals into their bodies, often while staring blankly at the TV, at nothing, or reading. “Everybody just sits there, and that’s what I’d do,” Williams says. “I’d go in and go right to my chair. One day, before I went in, one of the nurses said to me, ‘Talk to those other people. Smile. Give them a word of encouragement. People know you. You’re a visible person in this community. There are a lot of sad people in there. You can make a difference.’ Boy, that was good counsel.”

Those sad faces have names now, and the frowns rise up to smiles when Williams walks in, rubbing backs, touching knees, hugging, conversing, offering supportive words. As he cheerleads others, he is humbled at how many people cheerlead him. One day, while he sat in the waiting room before a chemo session, someone called Williams’ name. It was Bill Bachmann, a photographer from Lake Mary whom Williams had met years ago. Bachmann, who was seeing a hematologist for blood clots, had followed Williams’ cancer fight in the media and was eager to offer the Magic VP encouragement. 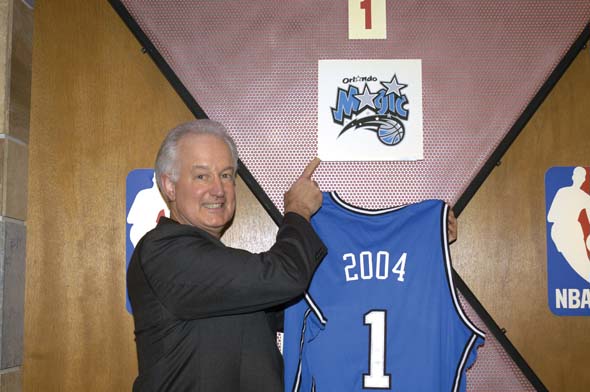 “When I heard Pat had cancer, it hit me like a punch in the stomach,” Bachmann say. “It was devastating. I know the cancer he has is incurable, but if anyone can beat this, it’s Pat. Look at what he’s done for Orlando. This is the guy who performed the impossible feat of bringing a major sports franchise to what was then a small city. He’s responsible for the Orlando Magic. That was his dream, and he made it happen. I believe he can beat this, too.”
Even more, Bachmann says, is that Williams’ fight has become “a community fight. Everyone talks about his progress. People everywhere are rooting for him.”

Martins says that not a day goes by when someone doesn’t ask him how Williams, who also is a former baseball executive, is doing. “It can be anyone from the NBA commissioner, David Stern, to Magic fans. I can’t think of anyone who has more friends than Pat.”

It’s fairly standard now, that when the Magic organization has its full staff meetings, updates on Williams’ progress get standing ovations. People in the Magic family and in the community can often be seen wearing the T-shirts Williams had printed that say:
THE MISSION IS REMISSION.

Sometimes the well wishes come not from his Magic family or from everyday folks like Bill Bachmann. Last March, a letter came from one of Orlando’s most famous residents, Arnold Palmer, himself a survivor of prostate cancer.

Dear Pat,
I understand you are going through a
tough time right now. I wish you all the
best with your treatment and would only
give you the same advice that people gave
me when I was going through my ordeal:
listen to what your doctors advise you
and keep a positive attitude.
Sincerely,
Arnold

It keeps Williams going. But even for him, as much as he wants to travel this journey along mountaintops, he finds himself at times in valleys of despondency. His wife, Ruth, sees him in those moments and how he climbs out of it.

“When he’s down, he immediately prays,” she says. “Then he talks to himself. He tells himself that he can’t get down, that other people are watching him. They’re depending on him. He doesn’t want his children to see him like that. He doesn’t want the public to see him like that. He sees how other people are wallowing in the pain and depression of cancer, and that they look to him to be Mr. Up—to be Mr. Enthusiasm. And that lifts him up. There are choices. You can stay in bed, or you can get up and be motivated. He chooses to be motivated.”

Williams also does whatever he can to tap into another of the bullet items he gleaned from Dr. Reynolds—physical fitness. He can no longer run, much less run marathons. Nerve damage in his feet with its accompanying pain and numbness often makes walking a trial. So every day he rides his stationary bike. Because of his fitness level, Williams was able to endure two 96-hour chemotherapy sessions late in 2011, in preparation for a grueling blood and marrow stem cell transplant in February 2012. His physician, Dr. Yasser Khaled, had never done stem cell transplant on anyone over 65, because of how physically debilitating it is. But Dr. Khaled was willing to do the procedure on Williams, who was 71 at the time, because of his fitness level.

Since then, he’s been on experimental, cutting-edge chemo and other drugs, trying to stay a step ahead of the cancer cells. He continues to speak and write books. His 80th was published in February. He’s also involved in cancer fundraising and works closely with the Multiple Myeloma Research Foundation. Whenever he can, he preaches the importance of annual physicals and of tapping into the six bullet items—now. “One out of every two men will get cancer in their lifetime, and one out of every three women. Every four minutes, someone dies of cancer. So get ready for your cancer battle—now.”

Mostly, though, what Pat Williams does is try to stay positive, for himself and for others.

“Cancer is going to do whatever it’s going to do,” he says. “But we’ve got to do what we’ve got to do. I choose to remain optimistic, hopeful, and stay engaged in life and plan for the future. I don’t have time to sit around and think about what’s happened to me, or why. I guess I could contemplate my navel, or watch the oranges grow or sit on my dock and stare at the water. But right now, I’ve got too much to get done.”

During one recent round of experimental chemo, Williams looked up at the solution dripping into a port in his chest and his eyes seemed to fix on something only he could see. A few quiet seconds ticked by before he brought his gaze back down.
“I’ve thought about this a lot,” he says. “Would I trade these last couple of years and this experience to go back to where I was? To have that normal life back?”

He pauses again, letting the thought settle, before shaking his head.

“Honestly, I don’t think I would. We all want to leave an imprint, make a difference, have an impact. All the basketball and baseball aside, all the books, all the children and all the grandchildren, I really think this is going to be the most significant thing I do with my life. Maybe with helping fund research and being the lab rat for new procedures, it can help come up with cures. We’ll see. But above all, I can give people hope and encouragement. I can do that.”

This article appears in the April 2013 issue of Orlando Magazine.
Categories: Features