Turn on the Neon

From the runway to the roadway, electric colors rule again. 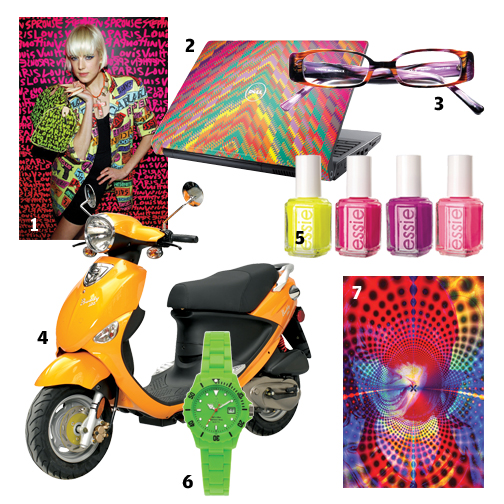 1. Acid Frocks Louis Vuitton by Marc Jacobs layers Stephen Sprouse’s Day-Glo graffiti on its luxury bags, $1,180, Louis Vuitton, Mall at Millenia. 2. Electric ShockIndie artists such as Deanne Cheuk (design shown here), Robert Hargrave and Peter Steven have created dozens of stylish covers for Dell Studio laptops, $600 and up, dell.com. 3. Bright EyeSpice up your eyewear with neon specs by Corrine McCormack, $52, eye-bar.com. 4. Orange You Outrageous The Buddy’s color not only looks cool, it’s bright enough that it may help prevent a crack-up with an oncoming SUV. Genuine Scooter Company, $2,000-$2,700, Orlando Yamaha Kawasaki. 5. Hot Tips Not willing to spend a pretty penny on neon couture? Here’s a fun way to get on the bandwagon. Essie nail polish, $8 each, Blooming Beauty Supply, Orlando. 6.Watch Yourself This eye-catching timepiece might make it difficult to be late to an appointment. ToyWatch, $195, Bloomingdale’s, Mall at Millenia. 7. Noah G. Pop’s digital art photography mixes street sense with ’60s pop art sensibility. The Brooklyn native and official artist for Bloomingdale’s recently had a three-month show at downtown’s CityArts Factory where he exhibited his sexy, psychedelic imagery. “Bold colors are what I like,” says Pop, whose real name is Noah Greenspan. Pop divines the aura of his subjects by using colored lights and digital layers until the work becomes kinetic and sparks with life. Besides photos, Pop also makes one-of-a-kind silk-screened T’s featuring his signature style. Sibyl, 45×30, $1,050, noahgpop.com.

Neon. Acid. Day-Glo. Hot. Psychedelic. Whatever you call it, blinding bright color is back. Hipsters with a thirst for anything ’80s started wearing neon several seasons ago, and now mainstream retailers such as J Crew and Banana Republic are picking up the trend. Sneakers, watches, electronics and even scooters are also going in colors such as acid green and neon blue.

To wear electric hues without looking like a hair band reject, keep most of the wardrobe neutral and add a shot of neon color, such as a skinny belt or handbag. Or, if you dare, wear a piece of clothing in a single hot color, but make sure the construction is tailored and neat—such as a lemon yellow pencil skirt or an electric pink shift dress—to keep it modern-looking.

This article appears in the August 2009 issue of Orlando Magazine.
Categories: Fashion & Shopping